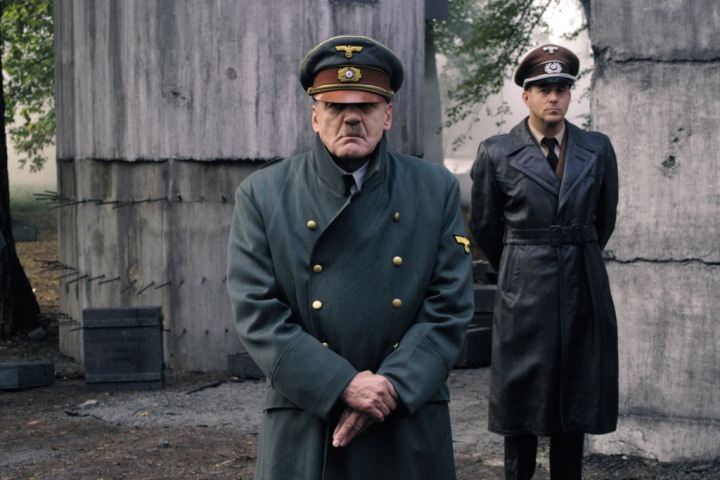 The last 10 days of Adolf Hitler (Bruno Ganz) are viewed through the eyes of his naïve last secretary Traudl Junge (Alexandra Maria Lara), thus bringing the viewer uncomfortably close to the most despicable and pathetic human in history. It’s a bold piece of film-making which necessitates repeated viewing. A suitable companion piece would be the 1984 German TV-movie ‘The Final Solution:

The Wannsee Conference’ a real-time reenactment of the starting point of the Holocaust which offers unprecedented insight into the bureaucratic workings of evil as opposed to the purely psychopathic, personal evil of Hitler. After unwillingly getting to know Hitler better, what is truly astounding and perfectly reflected in the movie, is the contempt Hitler felt for his own people. This is probably true for dictators and so-called strongmen everywhere. 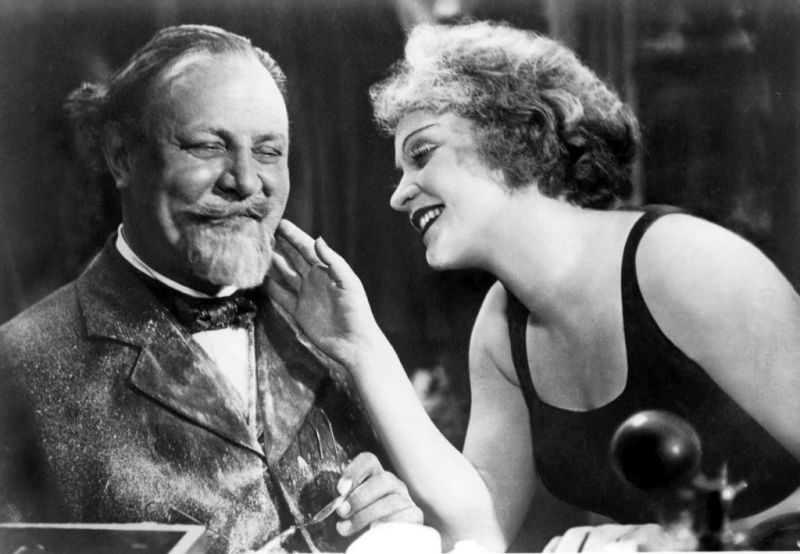 The film that made Marlene Dietrich a shooting star, this is a classic tale of obsessive lust and desperate love which catapults the central character, professor Immanuel Rath into disaster. A strict disciplinarian, he is constantly taunted by his students. When he discovers that they like to spend time at the local cabaret, he decides to pay a visit and have a word with the sleazy manager. There, he is immediately awestruck by the sensual, gorgeous Lola (Marlene Dietrich) and manages to relax in the convivial atmosphere.

A torrid affair ensues, social disapproval reaches a breaking point and the professor is eventually fired. A familiar theme is turned into a complex morality play, still relevant today, not just for the unforgettable Marlene Dietrich. 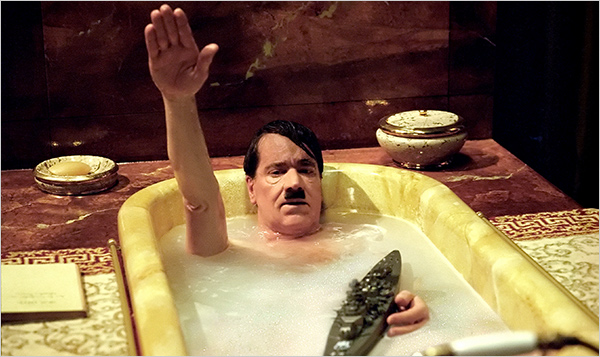 An underrated satirical masterpiece, this little gem sets off to depict Adolf Hitler like never before. It is a more intelligent piece of alternative history than Tarantino’s ‘Inglorious Bastards’ ever hoped to be, executed with less bombast and more panache. The story unfolds in December 1944, when the German army was suffering defeat after defeat, thus leading Minister of Propaganda Dr Joseph Goebbels (Sylvester Groth) to hatch a desperate plan.

The Fuhrer (Helge Schneider) is to give a mobilizing speech to reignite the energy of the miserable masses. Hitler is an emotional basket case, suffering from various phobias and unwilling to appear in public. As a last resort Hitler’s infamous entourage enlists Adolf Grünbaum (Ulrich Mühe), a Jew who has long since been deported to a concentration camp despite having served as Hitler’s acting coach at the start of the Fuhrer’s political career. Grünbaum agrees to help on the condition that his wife (Adriana Altaras) and four children are kept alive.

What follows is a truly memorable viewing experience, full of hilarious moments and biting satire, a paean to Jewish humour, brilliantly conceived by writer-director Dani Levy. This time Hitler truly gets it on his chin! 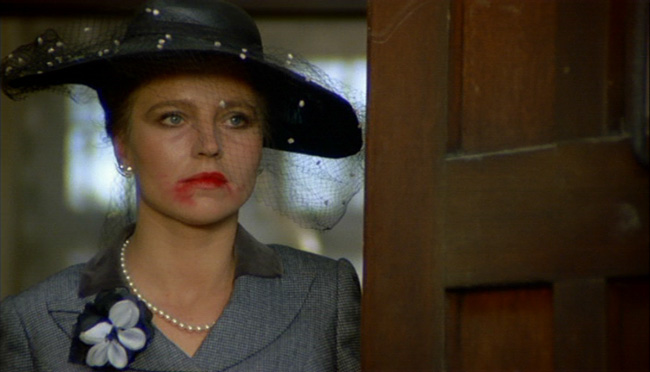 The first film in Fassbinder’s trilogy about women in post-WWII Germany (the other two are ‘Veronika Voss’ and ‘Lola’) helped bolster his international reputation, gave star Hanna Schygulla the role of her career and paid his dues to one of his favorite directors, Hollywood émigré of German origin Douglas Sirk (director of such melodramas as ‘Written on the Wind’ or ‘Imitation of Life’).

During the allied bombing of Germany, Maria decides to get married to her fiancé Hermann Braun. He is shipped off to the Russian front, she hovers desperately around the train station to catch any news about the situation on the front and, after hearing about his supposed death, gets involved with Bill (George Byrd) a black American soldier. Everything takes place against the bleak and chaotic background of post-war Germany trying to rise from the ashes. It’s a highly stylized film, laden with irony, but raw and intense at the same time, centered on Schygulla’s performance as an ice queen with a heart of gold. 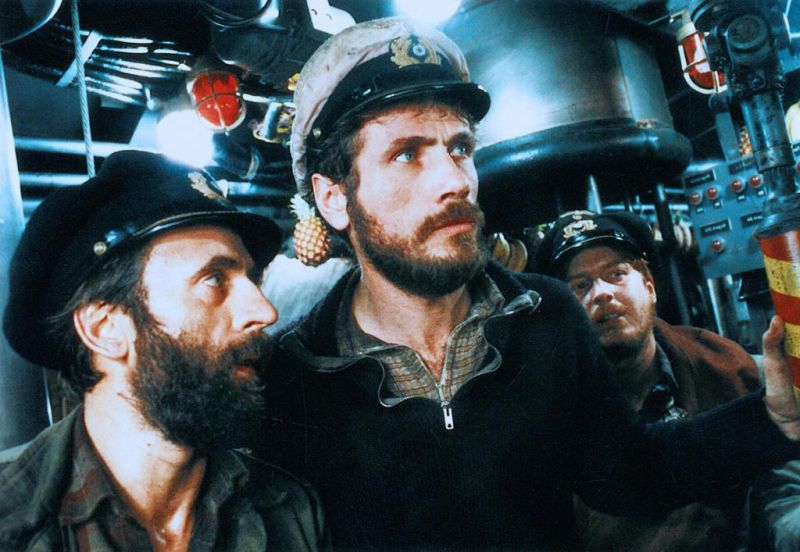 What sets ‘The Boat’ apart from other war movies is its capacity to pull the viewer down the hatch and give him enough sensory perception of the inside of the U-Boat and understanding of the inner workings of the minds of this crew. Tedium, claustrophobia and fear are constant, palpable companions. The battle scenes interrupt the monotony, the conversations reflect lack of trust in the possibility of winning the war and the capacities of the Fuhrer.

They quickly switch from being hunter and prey while patrolling the Atlantic. The towering central performance by Jürgen Prochnow as the fearless commander and the phenomenal camerawork by Jost Vacano are truly mesmerizing. The best way to enjoy the movie in full splendor is to seek out the 1997 restored version. For aficionados there is also a six-hour German miniseries. 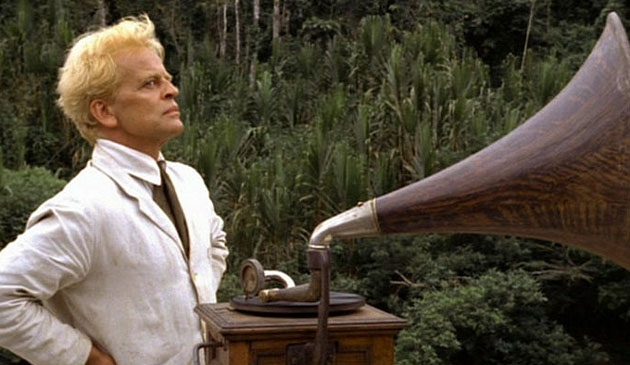 Stories about slightly mad, hopeless dreamers have rarely received a better treatment than in this operatic drama about Brian Sweeney Fitzgerald, known as Fitzcarraldo, an Irish impresario who dreams about building an opera house in the middle of wild jungle in Peru and then have Enrico Caruso perform on its stage.

To achieve that, he tries to move a large steamboat over a mountain. 10 years after the epic adventures of filming ‘Aguirre’, Kinski and Herzog have managed to create another colossal monument of cinematic insanity. Les Blank has chronicled the filming in his documentary ‘Burden of Dreams’. 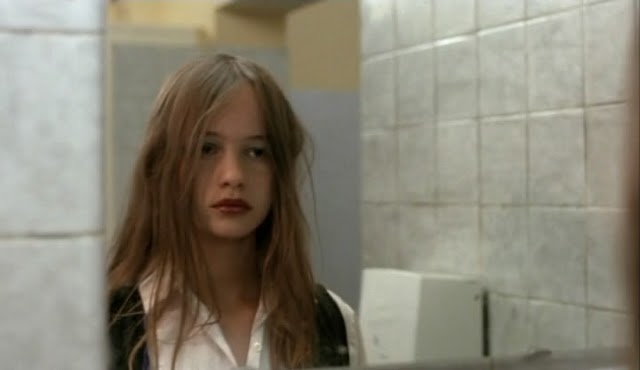 The underworld of drugs and prostitution of ‘70’s Berlin gets a grim portrayal in this bleak coming-of-age drama which boasts a David Bowie soundtrack and vivid acting by an amateur cast. 13-year-old Christiane (Natja Brunkhorst), out of touch with her life and neglected by her recently divorced mother, tries to find solace by partying the weekend nights away in ‘Sound’, the hippest disco in West Berlin.

There she meets Detlev a shy, sweet boy who is a heroin addict. After the initial exhilaration offered by puppy love and mild juvenile delinquency, Christiane succumbs to addiction herself. They are both forced into prostitution. Eventually they decide to go cold turkey together in the most harrowing scene of the movie. It is one of the most effective, unrelenting anti-drug movies ever made, a bone-chilling cautionary that hasn’t lost any of its power over time. 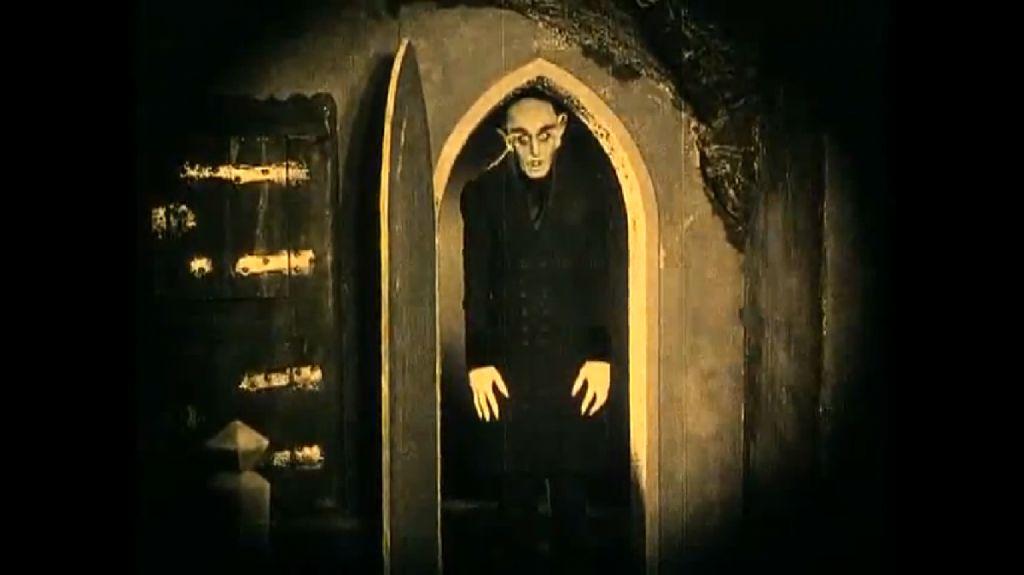 With the plot almost literally lifted out of ‘Dracula’, just some names and locations changed, the foremost reason this film continues to fascinate is the performance of Max Schreck as Graf Orlok Nosferatu, wearing some of the most iconic facial make-up ever seen in a movie. The scare tactics of this first of vampire movies rely more on dread that brute fear.

Being under the influence of German Expressionism, with its credo of dramatic interplay between light and dark, the vampire in this movie even casts a shadow! From the many movies that trace back their influence to this film, perhaps the most intriguing standout is “Dracula: Pages From a Virgin’s Diary” by Canadian director Guy Maddin. 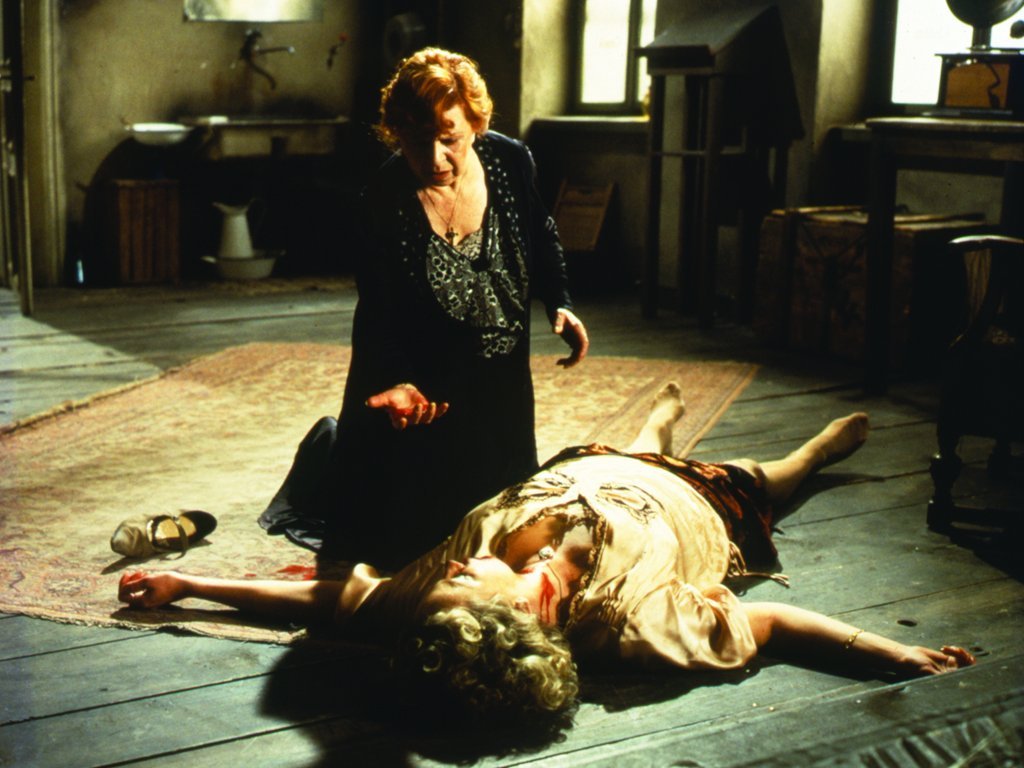 Rainer Werner Fassbinder’s magnum opus stretches out for 15 and a half hours, claiming to be the longest narrative film in history mostly shown as a miniseries on TV. It is the heartfelt culmination of the mostly avant-garde work of one of Europe’s most appreciated auteurs, an adaptation of Alfred Döblin’s classic modernist novel from the 1930’s.It is a lavish, occasionally overblown melodrama about one man, Franz Biberkopf (played by the unjustly forgotten Günter Lamprecht), trying to come to terms with himself and his many weaknesses, the most consuming of which is his almost sexual involvement with out-of-control pimp Reinhold.

This is doubled by Fassbinder’s own involvement with the movie’s central character to which he gives voice in the two-hour epilogue of the movie. This is recommended only for serious film fanatics with a penchant for artsy melodramas able to sit through the gargantuan length of the movie. 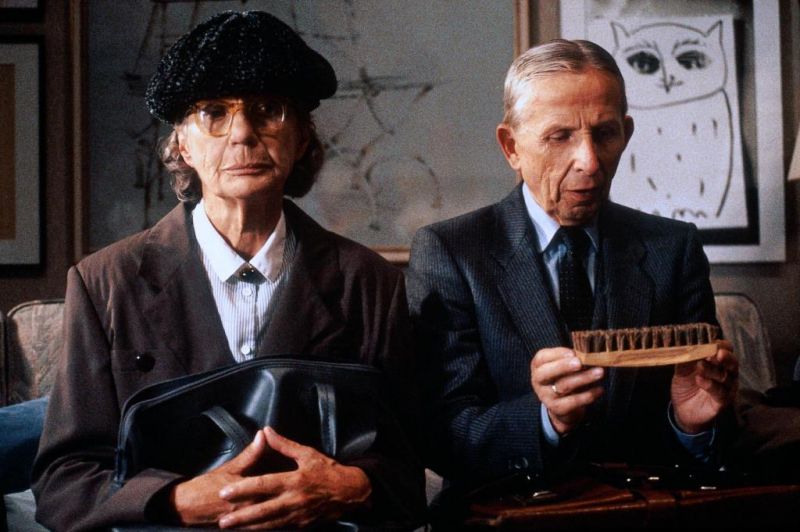 This is probably the best German art-house comedy of all time, starring national treasure Loriot (real name Vicco von Bülow) as Heinrich Lohse, a seemingly respectable head of department at a pipe factory. He promptly loses his job after ordering 40 years worth of typing paper for his office in order to save a few lousy bucks.

What follows is a subtly acted, perfectly timed comed of errors, with a perfect balance between Loriot and Evelyn Hamann as his stoic wife Renate. Every single word is in the right place, every innuendo refreshingly funny, a reflection of Loriot’s prodigious writing talents.