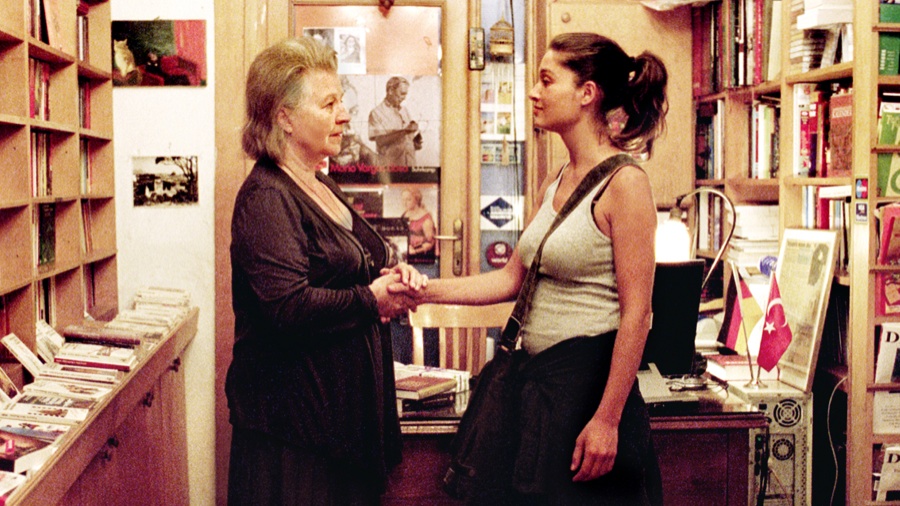 The Edge of Heaven is a German-Turkish co-production by Fatih Akin, a German director of Turkish descent. Easily described as a smaller yet more effective version of Alejandro González Iñárritu’s Babel, the film deals with multiple characters scattered over two countries with apparent ease.

Ali is a retired and lonely Turkish widower in Germany. When he takes in a Turkish prostitute named Yeter, his son Nejat initially disagrees but as time passes he softens to the woman, particularly when he learns that she sends shoes and tuition money to her daughter Ayten back in Turkey, hoping to get her a proper education. When Ali kills Yeter in a fit of rage, Nejat decides to go look for Ayten in Turkey.

Ayten however has fled Turkey due to political reasons and has made her way to Germany where she has befriended Lotte and is looking for her mother. Lotte’s mother Susanne disapproves of her relationship with Ayten but when Ayten is refused political asylum and sent back to Turkey and Lotte follows her with tragic consequences, Susanne also travels to Istanbul to continue her daughter’s quest.

Whilst the plot might seem convoluted from the above description, Akin’s screenplay is a marvel at keeping things clear despite the various characters, storylines and locations. In fact, it won the Best Screenplay Award at the 2007 Cannes Film Festival as well as at the European Film Awards. Veteran German actress Hanna Schygulla also won Best Supporting Actress from the National Society of Film Critics although it has to be noted that the entire cast put in very fine work. 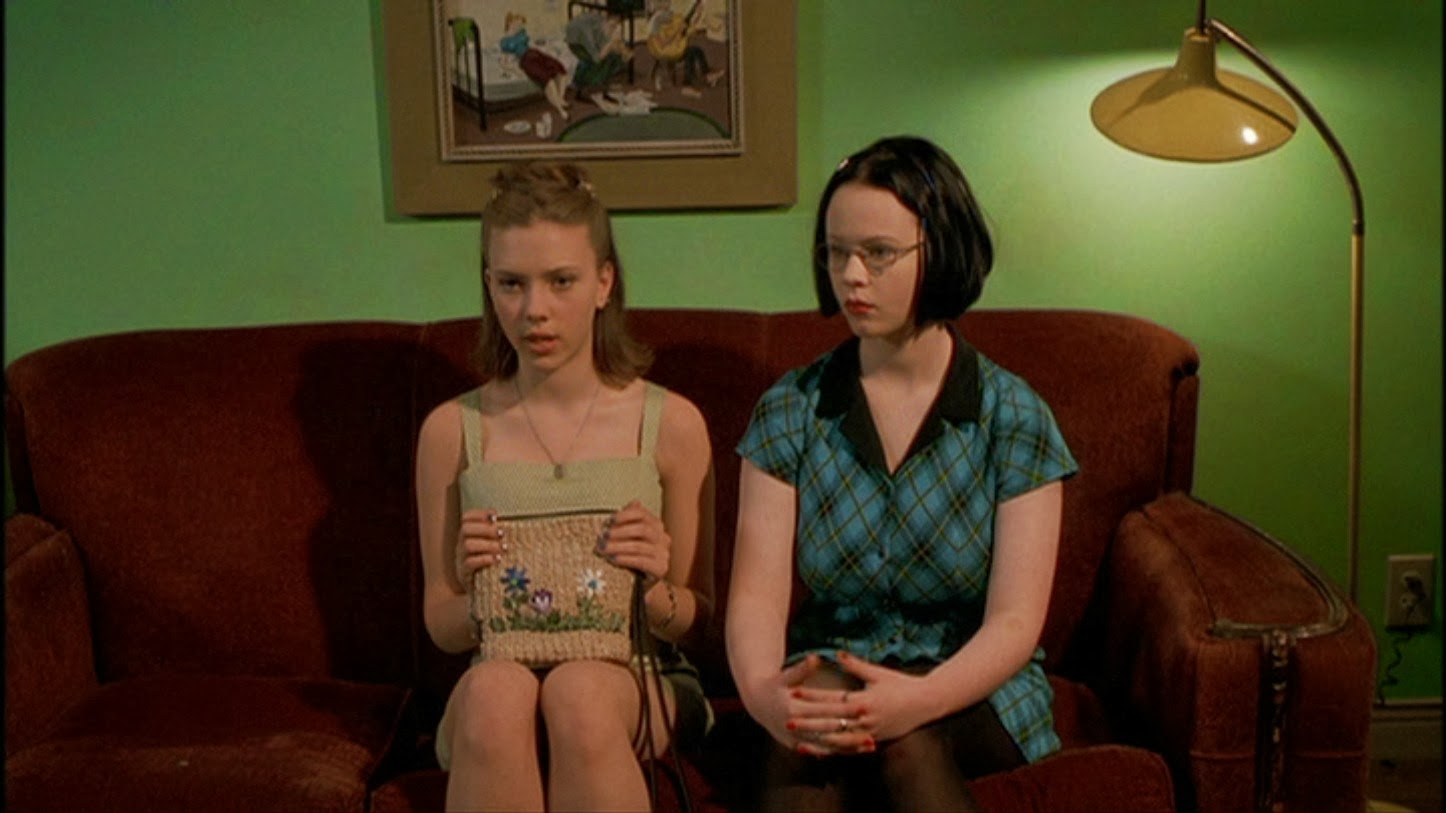 Based on the comic book of the same name by Daniel Clowes, who also wrote the film’s screenplay, Ghost World was the first dramatic feature film by director Terry Zwigoff, who had previously directed two documentaries including the critically acclaimed Crumb, about the infamous cartoonist Robert Crumb.

The film follows Enid (Thora Birch) and Rebecca (Scarlett Johansson), two teenage friends who have just finished high school, throughout the summer as they try to figure out what they are going to do with the rest of their soon to start adult lives. Enid is a cynical pessimist whilst Rebecca is a bit more popular with the boys because of her looks but both of them feel like outsiders.

They plan to rent an apartment together later on but basically cruise through the summer holidays, pretty much doing nothing except hanging around the convenience store where their mutual love-interest Josh (Brad Renfro) works. But when Enid meets fellow geeky outcast and much older Seymour (Steve Buscemi), the two girls slowly start growing apart as Rebecca just finds him creepy. As the summer progresses, things don’t work out as planned and the future seems to appear even more uncertain than it did before.

An original and off-beat coming-of-age story which benefits greatly from the performances from all three main players (Birch, Johansson and Buscemi), Ghost World perfectly captures the agony of adolescence whilst never losing its sense of humor.

Thora Birch had just come off her success in American Beauty and played a similar but even more nuanced role here, whilst Scarlett Johansson made her first real impact in Ghost World before really hitting the big-time two years later with Lost In Translation. The film received great critical praise but failed to well at the box-office although it has since gained cult status and is considered as one of the best comic book adaptations ever. 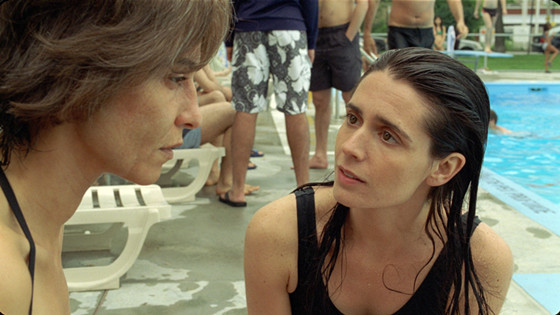 Adapted from a play of the same name by Wajdi Mouawad, Incendies is a French-Canadian film about the horror of war and how it affects everyone in its wake by Denis Villeneuve.

Jeanne (Mélissa Désormeaux-Poulin) and Simon are twins who, as a final request in their mother’s (Lubna Azabal) will after she succumbs to a stroke, are given two envelopes to be given to their father, who they believed had died long ago, and their brother, who they never knew existed. Simon refuses to grant the request but Jeanne leaves Canada for the Middle East in search of her long lost family members in the war torn region. There she will learn much about the complexities of the region as well as her family’s past.

To write anything more would be giving away too much as Incendies’ outstanding script, which alternates between Jeanne’s present day search and flashbacks exploring her mother’s back story, keeps twisting and turning until it arrives at its powerful finale. The film works brilliantly as a mystery, an in-depth look at the complexities of the region and as a fable of how hatred poisons all those who come in contact with it.

The film was nominated for Best Foreign Language Feature at both the Oscars and the BAFTAs, won about every prize available at the Canadian Genie Awards (Canada’s Oscars) and a whole string of other awards at various international festivals and ceremonies. 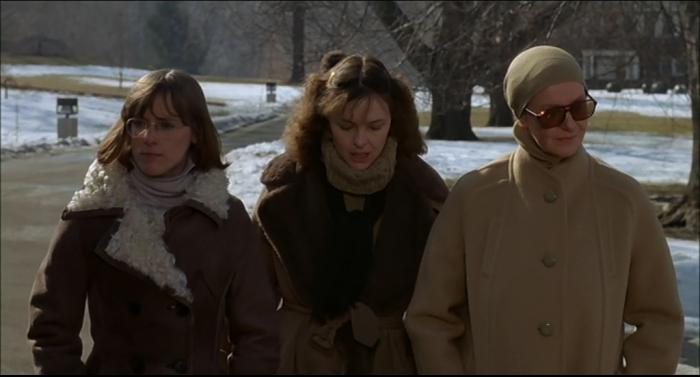 Woody Allen’s first serious drama and a clear love letter to his idol Ingmar Bergman, Interiors was met with polarising responses upon its release. Some people could either not get down with the fact that he wasn’t doing comedy or thought he sold out and made the type of movie which he had lampooned earlier in his career, whilst others saw the movie as a major step forward and further proof of Allen’s multifaceted talents as a director.

As the daughters rally around the mother for support, issues amongst themselves, their partners as well as their parents all come to the surface. And whilst Eve hopes that she will still be able to reconcile with Arthur and save her marriage, it becomes abundantly clear that Arthur has no intentions of doing so.

An intimate and powerful portrait of family dysfunction, Allen showed a completely new side of himself as a director when he was given complete artistic freedom after the great financial and critical success of Annie Hall. Interiors is probably Allen’s most dramatic and grim film to date but it’s also a clear forerunner of the highly successful ensemble cast comedy-dramas he would excel in during the mid-eighties and early nineties.

The movie was nominated for five Oscars, including the ones for Best Actress (Geraldine Page) and Best Supporting Actress (Maureen Stapleton) in addition to a whole string of other nominations and wins at various festivals and ceremonies, which often also commended the various members of the outstanding female cast. 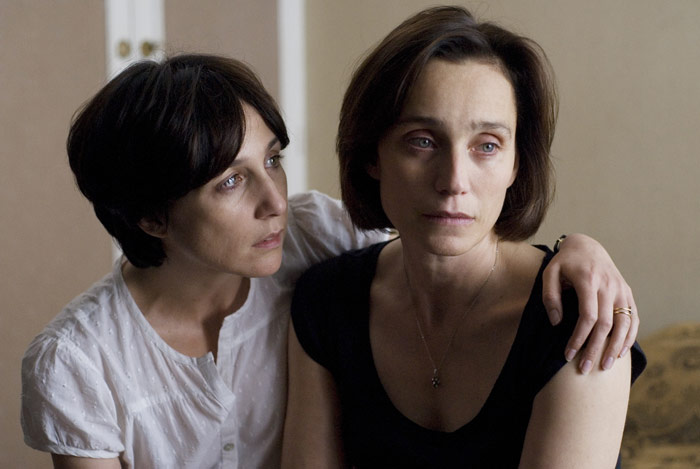 I’ve Loved You So Long is French-German co-production and the directorial debut by Philippe Claudel, which opened in various international film festivals and eventually also received a limited release in the United States.

Juliette (Kristin Scott Thomas) is a former doctor who is being released from a lengthy prison sentence. Her parents want nothing to do with her but her younger sister Léa (Elsa Zylberstein) is willing to help her out and offers her a place to stay with her family.

Léa’s husband Luc is unsure of the situation but their two adopted Vietnamese daughters seem pretty excited to have a brand new auntie and the family’s residence, which also houses Luc’s mute father, is big enough to accommodate Juliette without it being too much of an issue. But adjusting to the outside world and the people that care about her is hard for Juliette, who still struggles to come to terms with her new found freedom and the crime she was sentenced for.

As the film progresses the audience learns how long she has been locked up for, what crime she was sentenced for and ultimately the motivation behind it.

I’ve Loved You So Long benefits greatly from a stunning central performance by Kristin Scott Thomas, who proves to be just as fluid and convincing in French as she is in English when it comes to creating a multi-faceted, complex and honest depiction of a shattered character.

The film was nominated for and won multiple awards at various international film festivals and ended up in the top ten of many a film critic in 2009. A haunting and powerful drama, I’ve Loved You So Long ranks amongst Kristin Scott Thomas’ best and most nuanced performances. 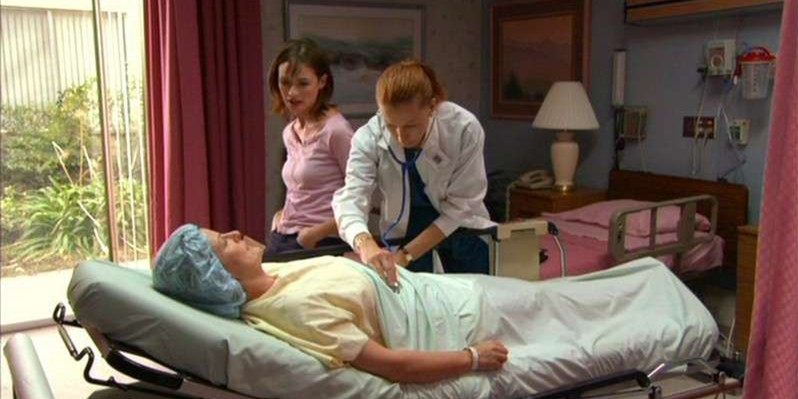 The second feature by Nicole Holofcener and her real breakthrough, as it was a critical and financial success (although her first feature Walking and Talking had already been an art-house hit), Lovely & Amazing is another sharp observational and witty film about the lives of a few women dealing with everyday life.

Just like her first feature, Lovely & Amazing is another comedy drama, this time about a mother (Brenda Blethyn), her two adult biological daughters and her one overweight adopted young African-American daughter (Catherine Keener, Emily Mortimer and newcomer Raven Goodwin). All women are dealing with issues amongst each other, relationships with their spouses or love interests, other problems concerning body image and how they are perceived by the world around them.

Holofcener is renowned for writing honest and insightful portraits of modern women and she always elicits strong performances from her female leads but it’s worth mentioning that the male supporting cast (including a young Jake Gyllenhaal) also do very well in this observational comedy. Honest, funny and insightful, Lovely & Amazing garnered specific praise for Emily Mortimer’s portrayal of a struggling actress who doesn’t think she’s particularly attractive, whilst Catherine Keener and Brenda Blethyn are as reliable as ever. 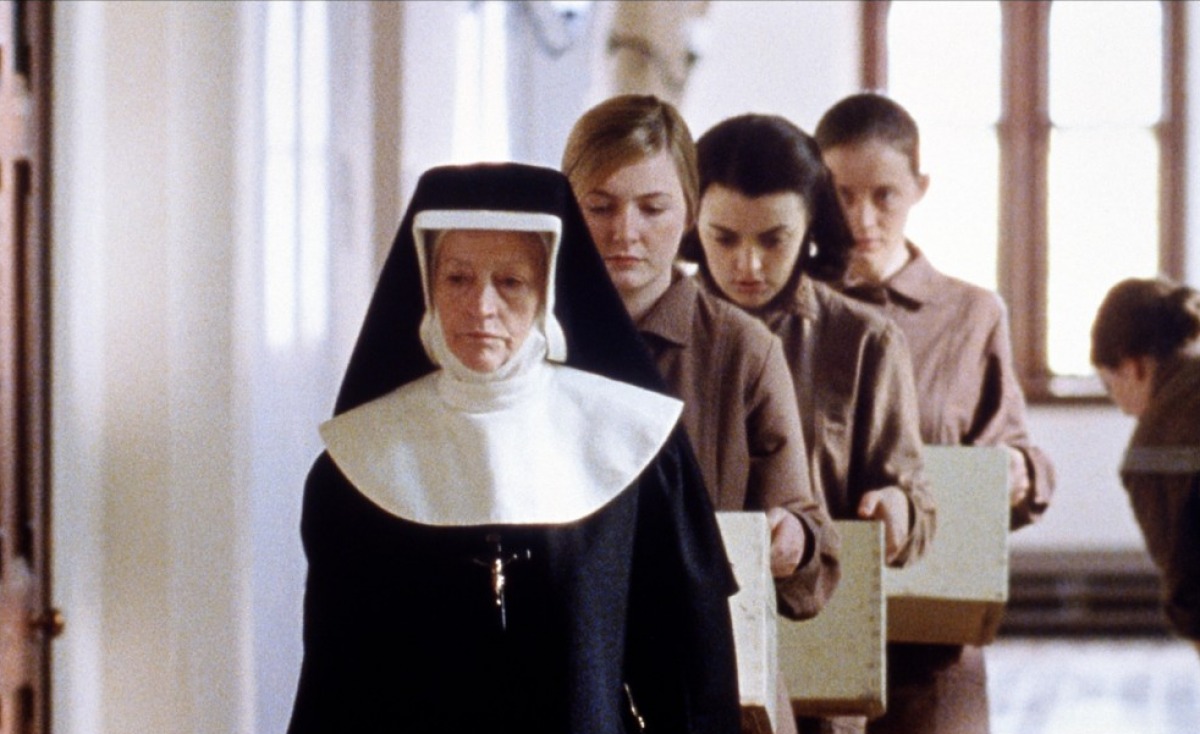 The Magdalene Sisters is a UK production, written and directed by actor/director Peter Mullan. The film deals with one of the infamous Magdalene Asylums, also known as Magdelene Laundries, Catholic institutions which housed “fallen women” from the 18th till mid 20th century. Anyone who has seen the film Philomena recently should be familiar with the institutions in question.

The film is set in 1964 and follows a few women who have been sent to an Irish Magdalene Asylum by their families to seek redemption for their sins; Rose (Dorothy Duffy), who has a child out of wedlock, Margaret (Anne-Marie Duff), who was raped at a wedding by a cousin, Bernadette (Nora-Jane Noone), who has been way too flirtatious with boys in the outside world, and the mildly mentally handicapped Crispina (Eileen Walsh).

The asylum however turns out to be more of a prison camp, which works the women there to the bone, and is run with an iron fist by the head nun, sister Bridget (Geraldine McEwan), who abuses her power and seems to revel in keeping the girls in check by means of humiliation and degradation. All women hope to escape but this proves to be a very difficult task, which can have serious consequences.

Filled with superior performances from all the leads, The Magdalene Sisters is an unflinching look at the horrible situations young women were subjected to for simply being deemed “wayward”. Peter Mullan stays clear of ever becoming maudlin and depicts the events with a certain emotional distance which only serves to make the proceedings all the more impactful.

He also refuses to just focus on the bonding between the young girls who all find themselves in the same situation and spends time exploring their internal difficulties as well. The Magdalene Sisters won the Golden Lion at the Venice Film Festival and received unanimous critical acclaim upon its release apart from the Vatican who officially condemned the film.