Yeah,this is confirmed,Edward Yang’s melancholic four-hour epic A Brighter Summer Day is confirmed to be released by Criterion in both format of DVD and Blu-Ray,it would probably be the biggest and greatest news in home entertainment in 2012.

So what’s so great about it?

First,the status of A Brighter Summer Day in Chinese Cinema history is unshakable.In the latest “Top 100 Greatest Films of All Time”  poll  initiated by one of the most authoritative online media Cinephilia.net,A Brighter Summer Day ranks at #3,this high ranking shows how important and perfect this film is in the hearts and minds of film critics in China.

It is also quite prestigious among Chinese film fans,after I “tweeted”  this news on weibo.com,it was retweeted madly with some really exciting comments,seeing it on the big screen has been many cinephiles’ dreams since the first time they watched it,the incidents in the film are loaded with their memories of youth.

A Brighter Summer Day not only received tremendous love from its country fans,but also crazy worship from foreign film buffs.As far as I know,this guy and this guy both love the film to death,and some friends over Facebook are big worshipers of Yang’s work and all considered it as his best.

Second,A Brighter Summer Day has been one of the best films that gets the poorest release in home entertainment history,the only version available here in Chines is a laser disc version bootleg DVD,and it has never been restored by any organization and thus never been distributed by any DVD company in China or abroad,until it was restored by World Cinema Foundation in 2009 and Criterion finally got the right to the film recently. 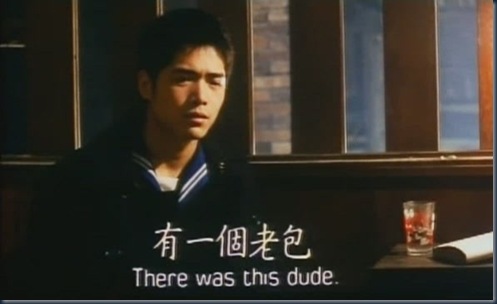 The poor PQ of A Brighter Summer Day LD

When the film is released,it would be a giant leap in DVD release history.LD to Blu-Ray,think about it,hooray to modern technology!

1.The film would be released in spring next year,which means we will see the news on the official site this year.

2.The film would be loaded with special features(video and interviews) and a commentary that equals the quality of the film.