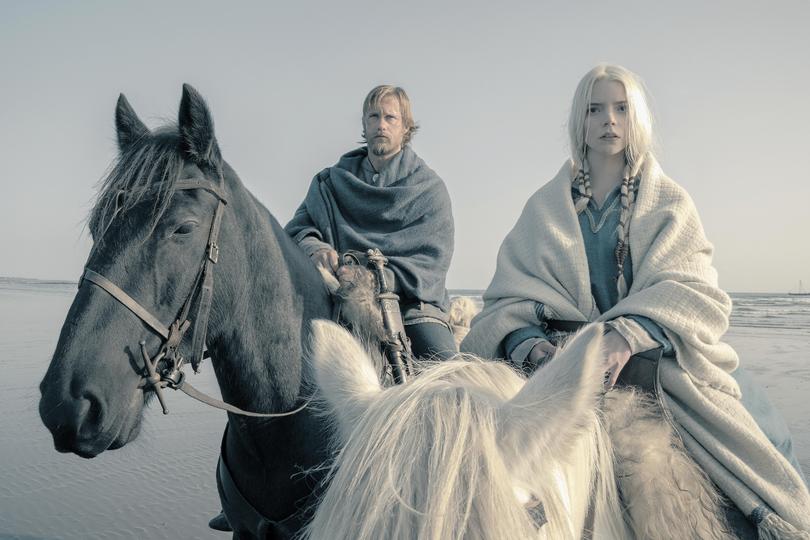 It may be too soon to pass judgment on Robert Eggers’ brand-new Viking epic, a much-anticipated period piece described by his own creator as the metal marriage between the brawny action of ‘Conan the Barbarian’ and the religious spiritualism of ‘Andrei Rublev’. On many fronts, ‘The Northman’ delivers on that lofty promise — putting its $90 million budget and colossal ensemble to good use in a testosterone-heavy adventure throughout Scandinavia that presents the same attention to detail and spotless authenticity patent in every other Eggers’ production.

The story centers around Amleth (Alexander Skarsgård), a hot-headed prince-turned-berserker who vows to avenge the murder of his father (Ethan Hawke) and reclaim his kingdom from the hands of his bastard uncle Fjölnir (Claes Bang). This serves as the central crux of the narrative, a classic tale of succession, unfulfilled prophecies and fate that finds its roots in the same 10th century Norse legend that inspired Shakespeare’s Hamlet. Fortunately, Eggers never attempts to glorify vengeance, portraying it not as something that forebodes rewarding closure but as an all-consuming and futile endeavor, thus interrogating its own violence and forcing us to dwell on the emptiness of our hero’s quest.

In terms of sheer scale, ‘The Northman’ is without a doubt Eggers’ most ambitious undertaking to date. And yet, for a soaring saga constantly on the verge of its boiling point, the narrative never seems to take off. Eggers’ choices feel thoroughly convincing, yes, but rarely daring. Much has been said about studio meddling that allegedly tampered the director’s vision to make it more commercially palatable, which may explain why — compared to his ghostly New England folktales — ‘The Northman’ feels like a muted spectacle. But make no mistake; even an Eggers’ film neutered at the editing room still makes for a more compelling watch than 99% of Hollywood’s mass-produced schlock.

Religion is the bedrock of Eggers’ world, an element that wraps its tendrils around all of his characters, molding their moral codes and bounding them all together with rituals and shared beliefs. His major breakout film managed to eschew from generally accepted tropes and flip every horror cliché on its head to deliver a scathing indictment of religious fervor and its corrosive effect within close-knit communities.

The film, which put the director and lead star Anya Taylor-Joy on the map as two diamonds in the rough, follows a Puritan family who’ve been banished from their village and forced to retreat to a secluded homestead in the middle of the Massachusetts wilderness. Now, in the early sixteen-hundreds, that’s the closest thing to a death sentence you could get. The sudden disappearance of their newborn baby plants the seeds of distrust and leads to a lot of finger-pointing within the household, and soon enough distrust and paranoia threatens to subsume them entirely. Most conventional horror films would shroud its supernatural danger in mystery for at least the first act, but within ten minutes Eggers confirms our biggest fears — evil is right around the corner and has set its sights on this god-forsaken family.

‘The Witch’ is definitely a scary film, but of the slow-burn variety, the kind that gradually etches into your mind and haunts you long after the credits roll. There’s a looming dread seeping into the whole narrative that feels palpable from minute one, but which never manifests in contrived ways. Eggers masterfully builds a crescendo of escalating hysteria before culminating in a bone-chilling climax for the ages that haunts us to this day.

At its core, ‘The Witch’ is a portrait of a family that implodes from within. And though Eggers has certainly made artistic strides and churned out far more polished films since then, this may very well be considered his crowning achievement when it’s all said and done.

Robert Eggers refined and expanded upon the talent shown in his folkloric debut with a nightmarish psychodrama concerning two lighthouse keepers stranded in an 1890s coastal island, where they’re forced to contend with each other as their sole inhabitants for four weeks. Tom Wake (Robert Pattinson), the younger and less weathered of the two tends to lowlier chores while the gnarled, grizzled Ephraim Winslow (Willem Dafoe) is in charge of the light.

From drunken tirades, seagull squawks, crashing waves and mermaid visions, ‘The Lighthouse’ uncoils like a fever dream, juggling Greek mythos, Jungian psychology and Lovecraftian horror in a 100-minute descent into madness. The story explores the burden of isolation and madness in equal measure through the hardship of its two leads, blurring the lines between reality and delirium as they lock horns with each other and trade sea shanties during their psychotic four-week shift. Eggers’ knack for claustrophobic atmospheres and accurate iconography has never been so evident. Shot in slick, monochrome 4:3 aspect ratio, his nautical period piece feels astonishingly transportive; uncanny yet grounded, like a genuine representation of its period that somehow slithered into our present time.

Drenched in layers upon layers of symbolism, off-kilter imagery and metaphors, ‘The Lighthouse’ is a film that not only rewards repeated viewings but almost requires them to be fully absorbed. But it’s precisely that veil of ambiguity that is left to us to make sense of that makes it one of the most unique and captivating films in recent memory — one that feels both endlessly perplexing and infinitely interpretable.

Choosing one among ‘The Witch’ and ‘The Lighthouse’ is just splitting hairs at this point, but it’s hard not to settle for the latter as the summative triumph of Eggers’ career.