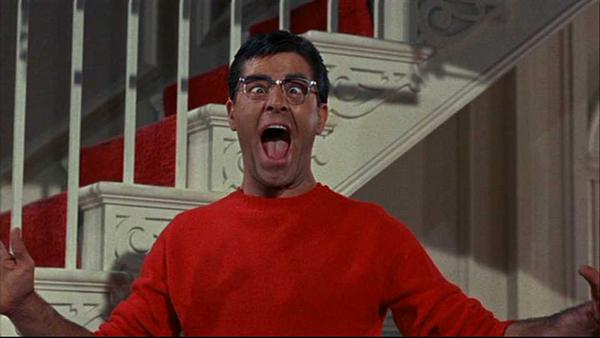 In a study of individual neurosis and demasculinization, the comedy and storytelling of Jerry Lewis shines in The Ladies Man. In the film, Herbert (Jerry Lewis) loses his girlfriend and gives up women for good. After he vows to avoid the opposite sex, Herbert seeks a fresh start by accepting a maintenance position at a Los Angeles boarding house. To Herbert’s surprise, the building serves single women. The landlady, Miss Wellenmellon (Helen Traubel), and sweet tenant, Fay (Pat Stanley), talk him into keeping the position, but Herbert quickly finds himself in an array of comic blunders.

The bizarre vibe of the film is truly what makes The Ladies Man astounding and memorable. Instead of relying on lame punchlines and corny jokes, the film strives for more experimental and ambitious endeavors. The Ladies Man is not afraid to incorporate flexible gender dynamics and depict the fundamental infantilism of conventional manliness. Therefore, there is a boldness to the film that makes its surreal and sexual ambiguous nature enthralling and funny.

The Ladies Man is a terrific movie for Lewis fans and any admirers of slapstick comedy. 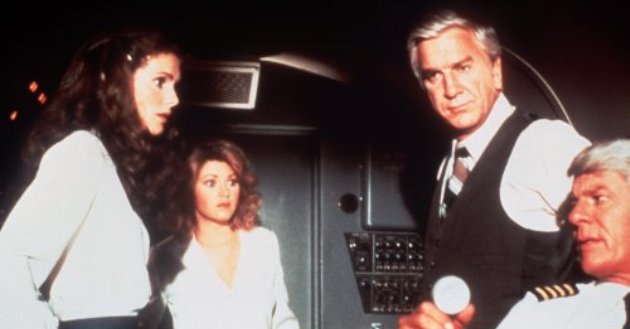 Being the epitome of modern slapstick comedy, Airplane! has cemented its place in cinema history as one of the funniest movies of all time. When the passengers and crew of a plane become extremely ill due to food poisoning, a former pilot (Robert Hays) must work with his ex-girlfriend turned stewardess (Julia Hagerty) to save the passengers and land the jet safely.

Airplane’s relentless roasting of cliché 1970 disaster movies is absolutely perfect, and each passenger is a hilarious representation of their straight-faced counterpart. The little old woman from Airport is now a “jive-interpreting” grannie. The guitar playing nun in Airport 1975 is also mocked in Airplane! as a musically skilled nun who knocks out a little girl’s intravenous tubes while participating in an inspiring sing along. The writers and directors of this film, Jim Abrahams, David Zucker, and Jerry Zucker put so much detail into their gags that the movie does not lose focus and drift away from its comedic goal. While some scenes of the film are not directly parodying disaster films, it is clear the Zuckers and Abrahams fully understand the genre they are satirizing.

It must also be said that the cast of Airplane! and the characters they portray are brilliant. At the time, the newcomers to comedy work well with their humorous material. They embrace the wackiness but never portray their characters as in on the joke. Along with the cast’s acting abilities, each character has a memorable moment ingrained in audiences’ memoires. Peter Graves and Leslie Nelson’s exchange regarding the gravity of the plane’s situation is comedy magic:

Airplane Captain (Peter Graves): “Surely you can’t be serious.”
Doctor (Leslie Nielsen): “I am serious. And don’t call me Shirley.”

Lloyd Bridges’ line of “Looks like I picked the wrong week to quit sniffing glue” during the crisis is also laugh-out-loud hysterical.

Airplane’s humor may be deemed as sophomoric, but this is the quality that makes it a legendary film. 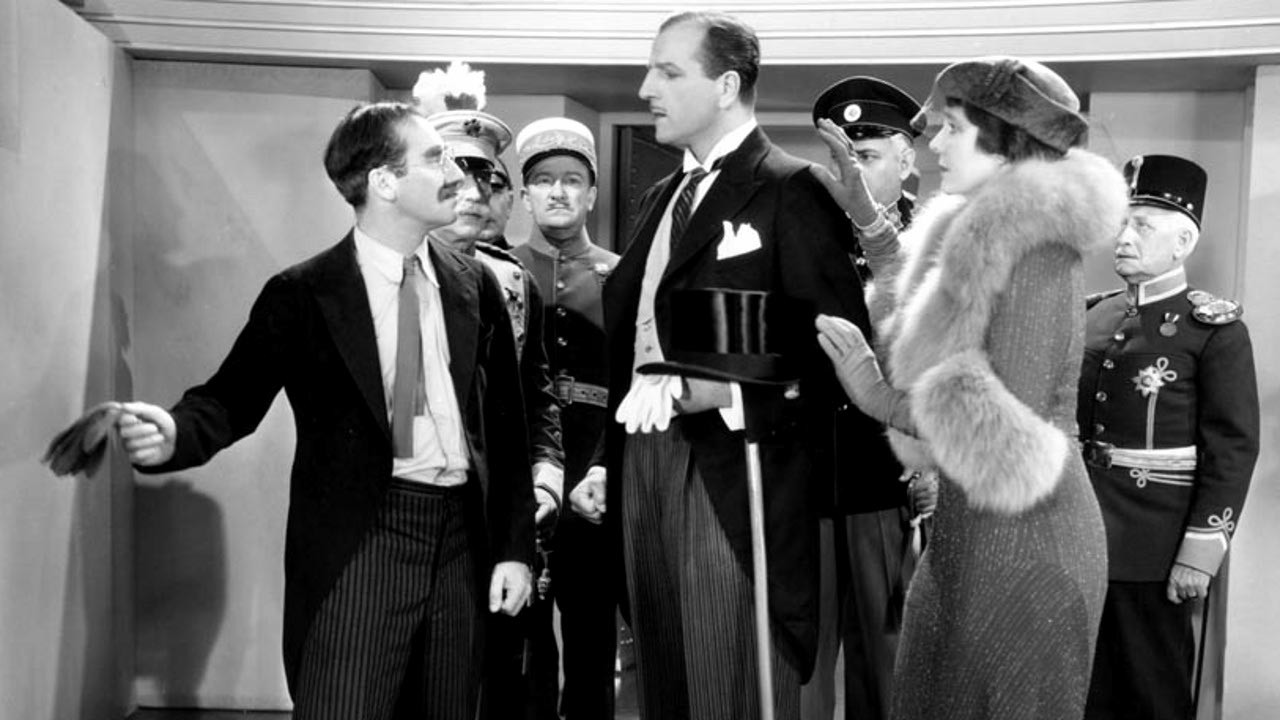 The Marx Brothers and director, Leo McCarey, deliver the perfect amount of frenzy and wit with the creation of Duck Soup. The movie is set in the small state of Freedonia where a financial crisis is occurring. When wealthy benefactor, Mrs. Teasdale (Margaret Dumont), becomes adamant that Rufus T. Firefly (Groucho Marx) be the country’s president, mayhem erupts. To make matters worse, the neighboring state senses Freedonia’s weakness and sends bumbling spies, Chicolini (Chico Marx) and Pinky (Harpo Marx), to steal information for the start of a revolution.

Unlike the intricate moves of Keaton and Chaplin, the Marx Brothers’ brilliance originates from a different source of comedy. The Marx Brothers’ rely on a well-paced chaotic nature, and their physical slapstick acts more as a deranged dance than a graceful ballet. As each antic or sequence escalates, the laughs do as well.

Another major difference between the comedy styles of Chaplin and Keaton and the Marx Brothers is their use of words. Obviously, the Marx Brothers’ had the option of adding wordplay to their physicality. The rapid dialogue is said with such a wonderful sting, and the satire is so palpable that in just 68 minutes Duck Soup becomes one of the most hilarious yet powerful examinations of the absurdity that can ensue from international politics.

Duck Soup is a fantastic combination of mania and intellect. 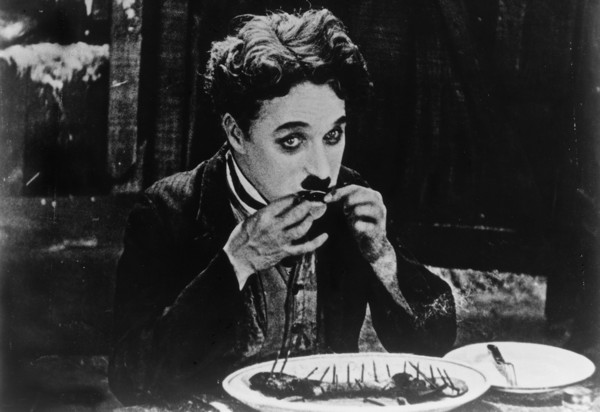 From the cinema era that originated it, The Gold Rush is a marvelous example of early slapstick comedy. In this silent comedy, the Little Tramp (Charles Chaplin) heads north to participate in the Klondike gold rush. Unfortunately, the Tramp becomes trapped in a tiny cabin by a snowstorm and is forced to share the cabin with a prospector (Mack Swain) and a fugitive (Tom Murray). After the Tramp is able leave the cabin, he attempts to win the affections of a barmaid (Georgia Hale) while also helping the prospector locate his claim.

One of the main reasons The Gold Rush is such a wonderful film is its understanding of the idea that comedy and misery are not removed from each other. In fact, for comedy to be effective, misery is essential. Chaplin shows the nasty, dangerous aspects of the frozen wilderness and plays them for laughs with his well-known physical comedy and exaggerated reactions. Eating shoes and candles is both sad and humorous when deeply thought about, and the alleged cannibalism of the Donner party is hilariously spoofed by the scene in which Big Jim imagines the Little Tramp as a delicious chicken. Many imitators have tried to capture the comedic magic of this joke, but it has never been truly equaled.

The other major factor that contributes to the Gold Rush’s success is the technical feet. The special effects are impressive and greatly strengthen the comedic elements of the film. The technical integrity of the film also makes the movie feel like a silent comedic epic rarely seen in modern-day theaters. Thanks to some fake snow, clever camerawork, and Chaplin’s determination, the film never seems miniscule. Instead, Chaplin transports audiences to a humorous world set in the Alaskan tundra.

There is no other way to say it, The Gold Rush is comedy gold. 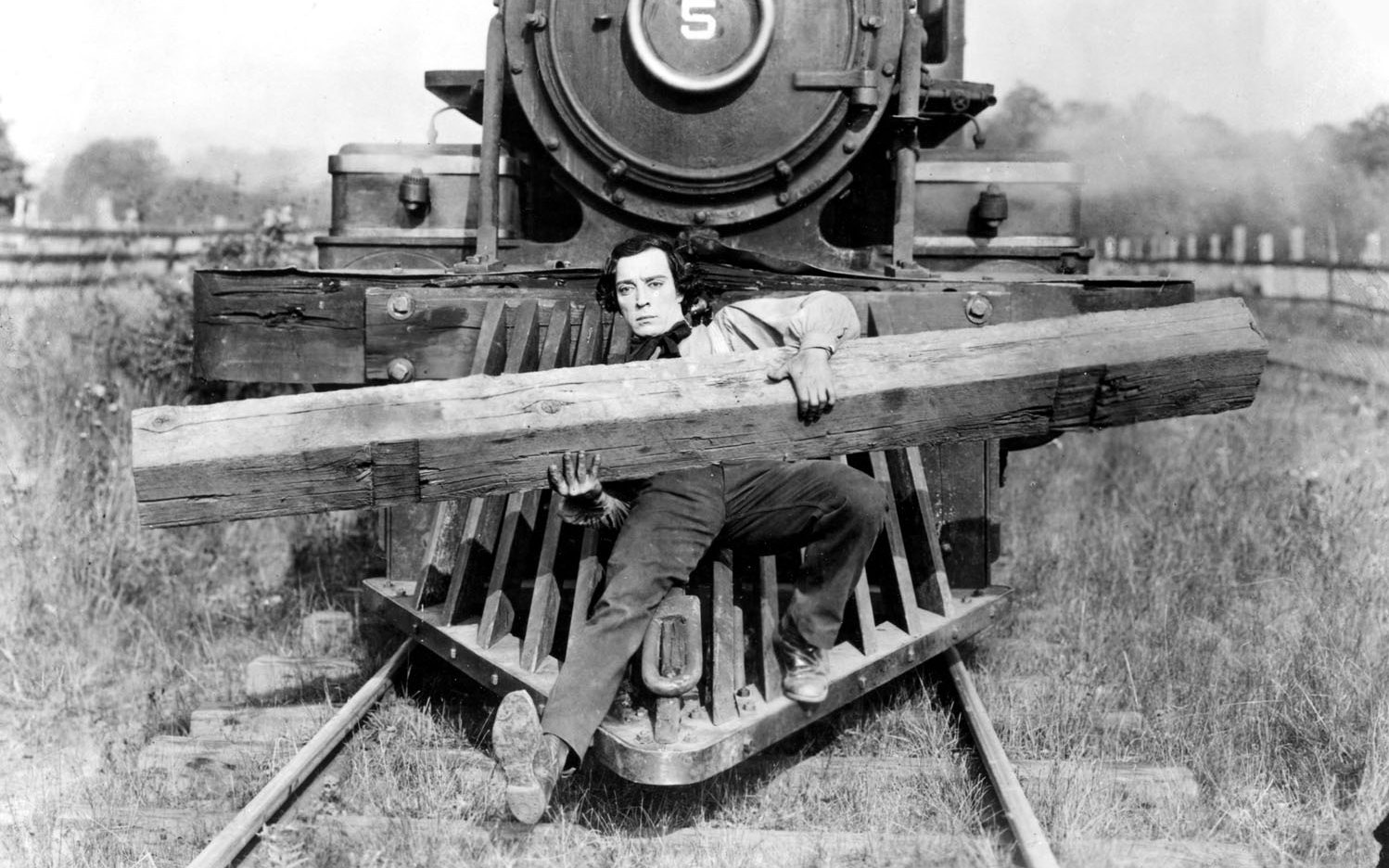 Along with Charlie Chaplin, Buster Keaton made a name for himself in the silent era as a physical comedy icon with The General. The film portrays a luckless Southern railroad engineer, Johnny Gray (Buster Keaton), facing off against Northern soldiers during the American Civil War to retrieve his fiancée, Annabelle Lee (Marion Mack), from a stolen train.

It is the physicality of Keaton that makes this movie remarkable. The actions performed by Keaton were brave and ambitious. Thus, it must be stated that Keaton was not only an amazing actor, but he was also a phenomenal stuntman. One of the most outstanding stunts performed shows Keaton’s character defending himself from a cannonball. In the scene, he runs and sits on the cowcatcher of the speeding Texas with a large railroad tie in his hands and no one controlling the train. The Union army throws another tie onto the tracks, and Keaton, with accurate aim and timing, knocks the second off using the tie he is carrying. The impeccably executed stunt was not only funny but extremely risky considering one false move results in Keaton’s brains being smashed out.

Along with the stunts, Keaton is also able to handle situational humor well. Keaton does not create a scene around a joke. Rather, the gag emerges from the already written scene. Beautiful teamwork arises from the characters, story, jokes, and stunts. Consequently, all of these aspects blend together seamlessly to produce an excellent product only Keaton can craft.

The General is a silent masterpiece that any cinephile needs to add to their must-watch list.