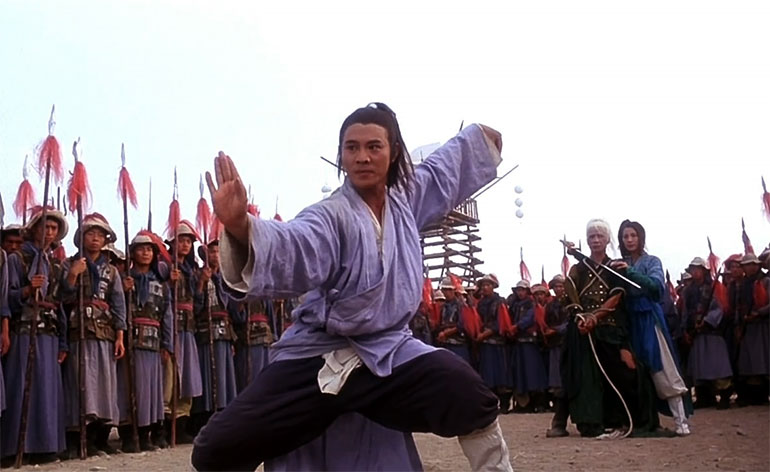 In addition to being one of the greatest fight choreographers in the world, Yuen Woo-ping is also a fabulous director of martial arts films; and though he worked with Li many times on the choreography side of things, as a director, they only collaborated once.

Which is a shame, because “Tai Chi Master,” their sole joint effort, is just terrific and makes one wonder what the two would have accomplished together as filmmaker and star. Thankfully, this film alone offers enough action spectacle to satisfy an entire career’s worth of movies: Yuen’s choreography here is crazy even by his standards, so elaborate and staged with such raw vivacity that it makes his work in American movies seem tame by comparison.

After all, only in a Hong Kong kung fu film can you see Michelle Yeoh use pieces of a broken table as stilts to kick her opponents. Some things, only this industry can offer you. 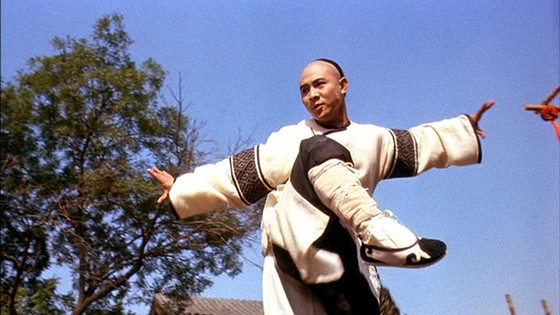 And speaking of insane, reality-bending fight choreography, Corey Yuen’s “Fong Sai-yuk” is high in the running for the best use of wire-work of all time.

Though less famous in the west as Woo-ping, Yuen is every bit as brilliant a choreographer as him, but his heightened style is harder to translate for a foreign audience. The director’s fights, especially in this movie, don’t so much bend the laws of physics as they throw them away completely; which can be bothersome to some, who prefer to see the actors really breaking bones on screen for our entertainment.

And while that undoubtedly offers a viscerality missing in wire-work choreography, it’s ignorant to think there’s less skill involved in crafting these sequences, both from the filmmakers and the performers. Yuen’s choreography is genuinely awe-inspiring, exceptionally paced, and breathtakingly inventive; and Jet Li’s speed, energy, athleticism and elasticity in performing the stunts defies belief. 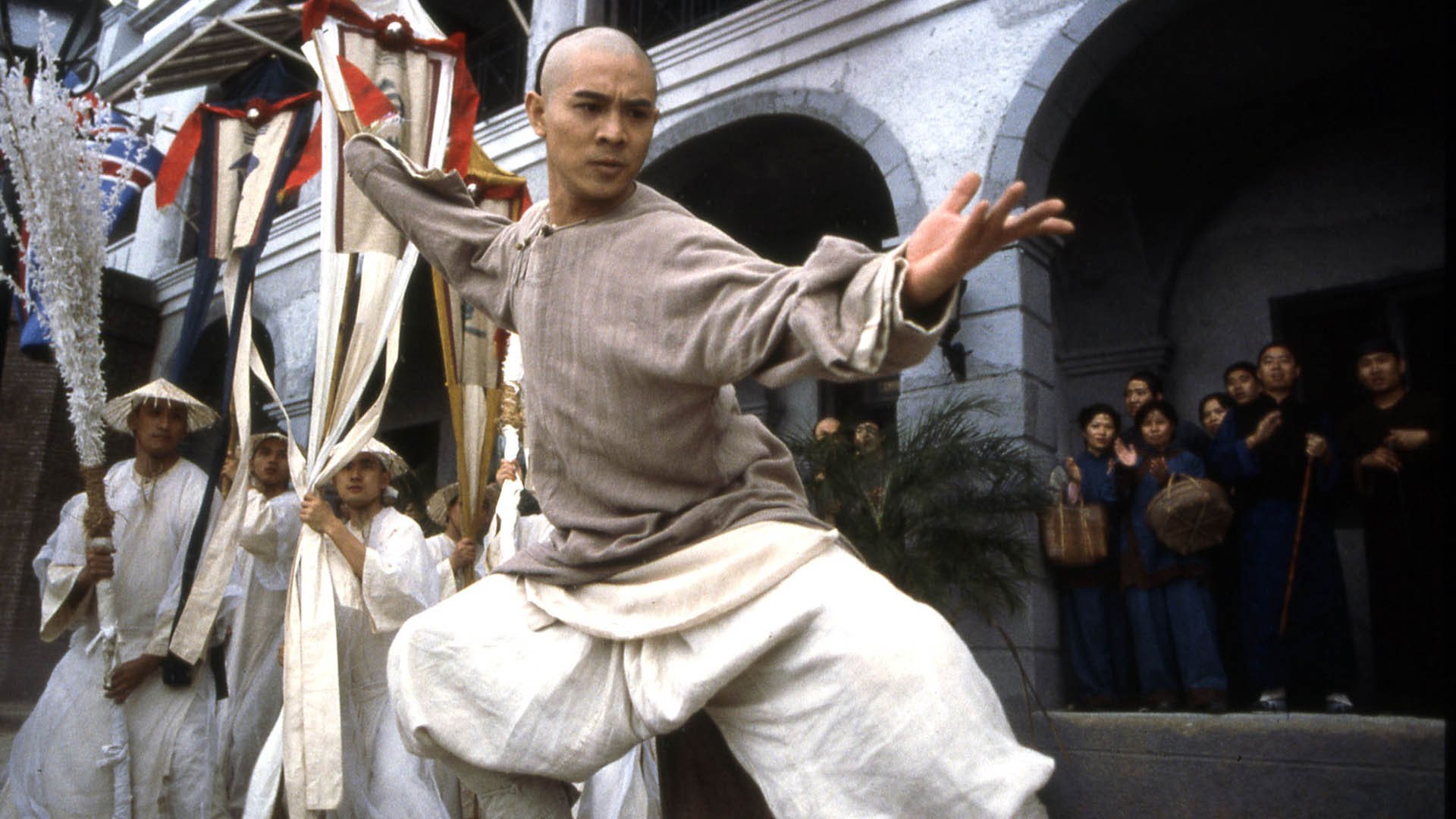 Tsui Hark’s masterpieces are some of the crowning achievements not only of his and Jet Li’s careers, but of the entire kung fu film canon.
This entire franchise, but in particular these first two movies, comprise all the best that this genre has to offer. They’re swapping historical epics that recount and fight back against the imperialist exploitation China suffered; they’re by turns inspiring, silly, tense, and romantic, seamlessly balancing a number of characters and tones, switching from funny rom-com to dramatic political intrigue without breaking a sweat.

Key to the artistry of these movies is, of course, Tsui himself, who is not only an excellent martial arts film director, but also a true filmmaker. The opening credits of the first film alone are more visually sophisticated than basically any other kung fu film you can think of – the shot of the students training on the beach, silhouetted by the sun, is the kind of aesthetic touch that sets these films apart from the fold.

But most of all, the “Once Upon a Time in China” films are a miracle of fight choreography (again courtesy of Yuen Woo-ping, who may very well be the most important figure in Hong Kong kung fu cinema post-1970s, given his imprint on so many of the best movies of the industry), and a masterclass of action editing and virtuosistic martial artist performance. Li’s superhuman skill as a fighter is used to its maximum potency in these movies, the ultimate proof that he’s one of the best of all time at what he does. 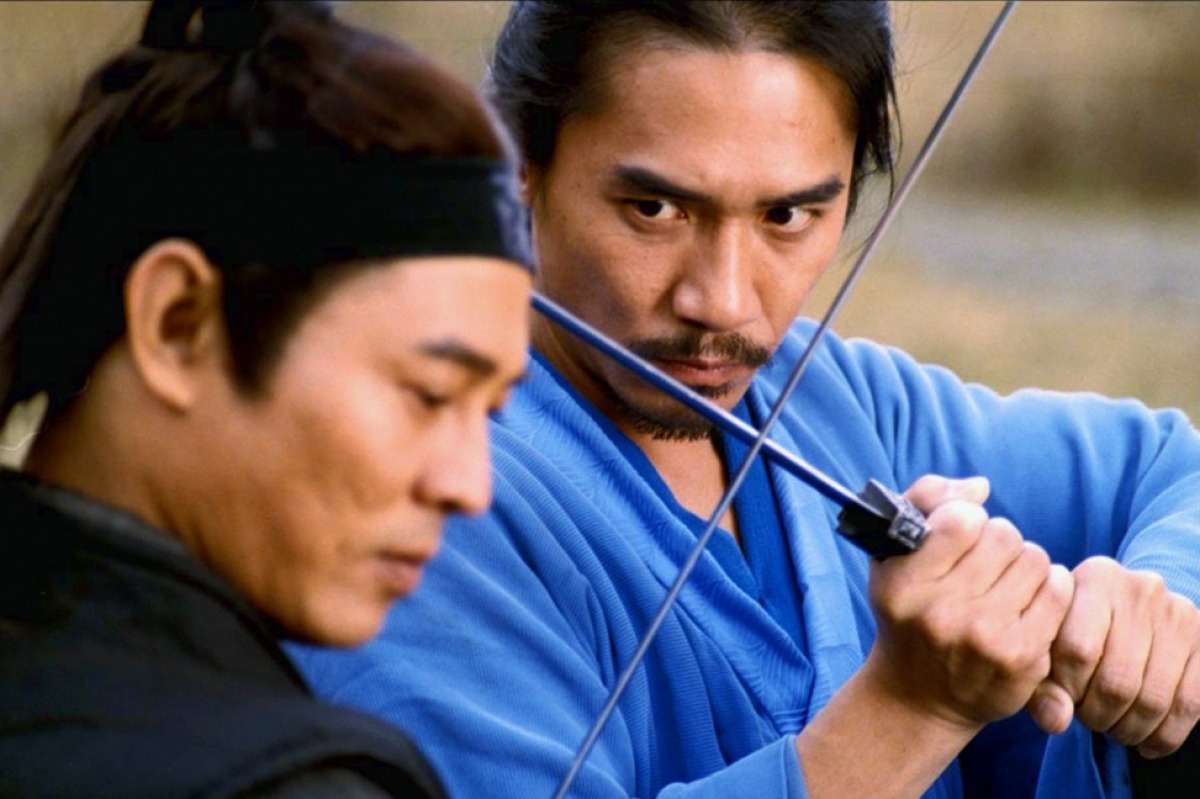 All of that being said, when looking at Jet Li’s career, Zhang Yimou’s “Hero” is in a league of its own.

Picture if “Rashomon” was reimagined as an MGM musical, filtered through the wuxia tradition, and you’ll begin to understand the astounding achievement that is this masterpiece, a film that marries a rich, rewarding, complex narrative with a sublime aesthetic vision. The merger of Yimou, one of the greatest visual stylists in the world, with Christopher Doyle, one of the most brilliant cinematographers in activity, results in what can be said with no fear of hyperbole is one of the most gorgeous-looking films ever made.

And that overwhelming beauty is expressed not only in the lavishness of the color or in the meticulous composition, but also in the elegance of the fight sequences. Yimou’s sense of space, blocking, and movement in the frame is exquisite and, while the choreography is far from the complexity of the other films on this list, it fits the tone of “Hero,” a wuxia that is a romance at heart, using the action scenes not as a spectacle unto themselves (though the combats in this are, as everything else, entrancing to look at) but as an exteriorization of the character’s deep well of suppressed emotion.

It’s a masterpiece of storytelling and filmmaking, one of the best films of the 2000s, and the finest, most artistically accomplished project Jet Li has ever been a part of.