The mystery surrounding Leland Palmer in Twin Peaks is one of the most lasting plots of any tv series. It’s interesting however that Leland does not escape being an oddball even without us knowing his full intentions, his full story, and his full character. When all of this comes to light, Leland is long gone, and we are left wondering what part of Leland was the character that we were seeing once he was on the screen. Were the forces of the spiritual realm controlling him, or did he also have a play into how he behaved.

Lynch seems to have left it open as to how much Bob actually influenced Leland, leaving us wondering who actually was Leland? It’s the mystery of the murderer that is solved but not yet sully explained when the culmination of Leland’s situation comes into play. It seems that his character was drawn weirdly to distract us from the actual happenings of the overall plot. 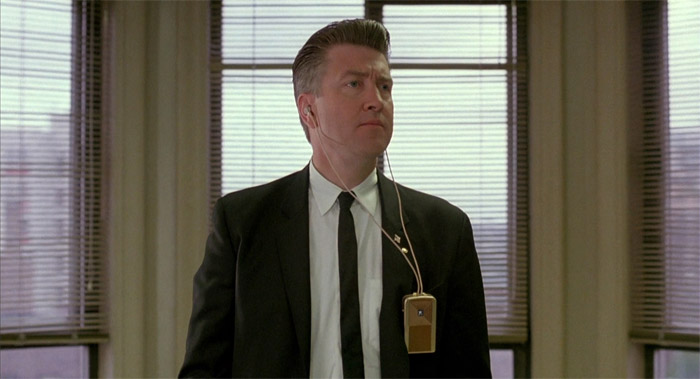 We can not leave weirdness without including the person that all of this weirdness on the list radiates from. Lynch seems to have naturally become part of his own world. It’s not only that he takes an objective higher stand when looking at his creations, but he has become one of them. Gordon Cole, the FBI agent who goes well with the small town décor of oddity is the perfect comedic refreshment that Twin Peaks needed as it was getting more and more revealing to the actual happenings of its underbelly.

Lynch as a participant says that he is just as weird as everything that he creates, and the most odd thing is that how far Gordon Cole differs from the actual weirdness of Lynch, how far apart or together are Lynch and Cole, it seems to be a leitmotif within all Lynchian characters that the inner struggle of personality is so stressed in their on screen appearances. The director himself is no exclusion from the rule.

As we are wrapping up the list, the final three characters on it, are what I’d like to call, the most extreme of Lynchian creations. While so far we have dealt with psychologically distorted personalities that thanks to their issues arise as weird and strange to an average viewer, the last three are different because the scope of things that they are faced with seems to be an even more entangled world that those which inhabited all the other characters.

Henry Spencer might give off the vibe of an everyman, but he is an everyman with everything hidden inside of him and it would take a whole series of events to bring forth his true self into light.

What was briefly touched with the Grandmother it seems to culminate in Henry Spencer, a character that is surrounded by sexual connotations on his every step. His detachment and fatalism in all of these passionate situations seems to make him an odd piece of the puzzle into the world Lynch is creating around him to suffocate a participant like Henry.

It’s not the character itself, because we know so little about it, it’s the sheer way as to how Lynch introduces him that sparks everything else about it. It’s a totally non sequitur in cinema history, the introduction of the Monster, and that is a terms we are using very carefully here.

A character that has nothing inside of him, it’s just a brief that seems to leave such a mark in the entire Lynchian universe and is so typical of his works that it’s not just the individual character but all the circumstances that surround him that builds the character and yet with his disappearance is leaving the door open for that good old mystery that Lynch likes to tease us with.

The monster is a distorted image of reality, it’s the thin line between what is real, surreal and unreal, what can happen, what might happen and what happens. It’s a character that is scary because it appears in such a common and familiar setting, a diner, broad daylight and is amplifying the scales of horror to a new dimension that gives the character itself a new light, or in this case darkness.

It’s actually not a person, but rather an entity, and Lynch is best when he has to communicate how things actually are in the underworld, the underworld of our thoughts and fears.

David Lynch’s interactions with his own dream consciousness lead him to face some very scary imagery. This is what he transmits to us in a more cinematic fashion. It seems the creatures and shadows that inhabit this world are no joke. It’s just that Lynch has a very sophisticated way of communicating evil spirits and evil entities to us. The scary part is how close to being real they are. They are in the real sense of the word nightmares that have come alive.

The Mystery Man in Lost Highway is also one of these manifestations. It’s not a person, it’s not a supernatural being, it’s something in-between, a fragment of somebody else’s personality. It’s the fragmented nature of reality and the fragmented nature of personhood that comes into play with Lynch, all of these characters are weird because their overall arc is unfinished, it’s left open, partly because mystery is an inseparable part of Lynch’s narrative, but also because the creations that inhabit Lynch’s world are meant to be unfathomable.