The most memorable part of any Monty Python film is always those glorious songs. Those catchy, funny and clever songs that stay in your head and live on long after the credits have rolled. For “The Meaning of Life,” the Beatles of comedy would return to a film of sketches showing the different stages of life.

When the children ask their father why he doesn’t use contraception or sterilization he responds with the chorus, “Every sperm is sacred, every sperm is great, If a sperm is wasted, God gets irate!” Pretty soon the whole family and town are singing along to a brilliantly choreographed set piece. A major influence on the musical numbers of the hit TV show “The Simpsons,” “Every Sperm is Sacred” is not only one of Monty Python’s greatest sketch, but one of the greatest musical performances ever.

One of Stanley Kubrick’s many gifts was his ironic use of music. Whether it came from his choice of the score or the musical performances of his characters, Kubrick loved flipping the music we hear in a scene against what we saw in that same scene. One of the most controversial scenes in one of the most controversial films is the “Singin’ in the Rain” scene in “A Clockwork Orange.”

Malcolm McDowell’s Alex cheerfully sings the song as he prances about the room, destroying things as his cronies force a husband to watch as they rape his wife. Famous for its use in the classic 1952 musical of the same name, “A Clockwork Orange” ruined the song for many people who pictured Gene Kelly’s literal singing in the rain whenever they heard the song.

As usual, Kubrick makes his point and then some, made more potent by McDowell’s unsettling and brilliant performance.

Just because there’s a lot of lip-syncing on this list it doesn’t make these performances any less awesome. And no performance is as awesome as watching Michael J. Fox rocking out in front of a crowd of confused high schoolers.

Traveling back in time before rock ‘n roll would take the world by storm and scare the living daylights out of concerned parents, Marty becomes the first bonafide rock star when he performs Chuck Berry’s classic “Johnny B. Goode” at the school dance. With moves from Eddie Van Halen, Pete Townshend, Jimi Hendrix and Angus Young, Marty gets a little carried away but ensures the scene was the standout in a film filled with iconic scenes.

Of course, those same teenagers would become the same concerned parents years later, but as Marty says at the end of his performance, “Maybe you weren’t ready for that yet, but your kids will love it!”

The immortal “Casablanca” is the type of old-school film that even people who don’t fancy watching anything older than their grandmother still enjoy. Highly quotable with one iconic scene after the other, “Casablanca” has many classic scenes that even the most casual of film fans know by heart.

Right at the top of those scenes is the “La Marseillaise” scene. When the Nazis take over the club with their singing, Victor Laszlo gets the band to play the French anthem “La Marseillaise” and a singing war begins. Everyone who isn’t a Nazi joins in and drowns out the Nazis with a heartfelt passionate sing-along.

Particularly striking as the Germans had invaded most of France at the time and no one would dare sing a song like around them. But this is Casablanca or more accurately “Rick’s Café” and whatever he says goes. For that moment anyway. This scene would live on and evolve to French pride whenever the moment called for it.

Regrettably, Dooley Wilson’s Sam performed many memorable songs throughout the film, but since one song per film, he gets an honorable mention.

Taking place nine years after the first film, Jesse has written a book inspired by that magical night with Céline in “Before Sunrise,” which leads to them crossing paths again. They spend the afternoon together in Paris catching up, reflecting on the times, their lives and their brief love affair.

Toward the end of their day, Jesse encourages Céline to play something for him on guitar and she breaks out a little tune she wrote about that same magical night. Written and performed by Julie Delpy specifically for the film and her character, it’s a simple song that’s made all the more special when she sings it. A magical night indeed, seeing as how they both ended up writing about it. 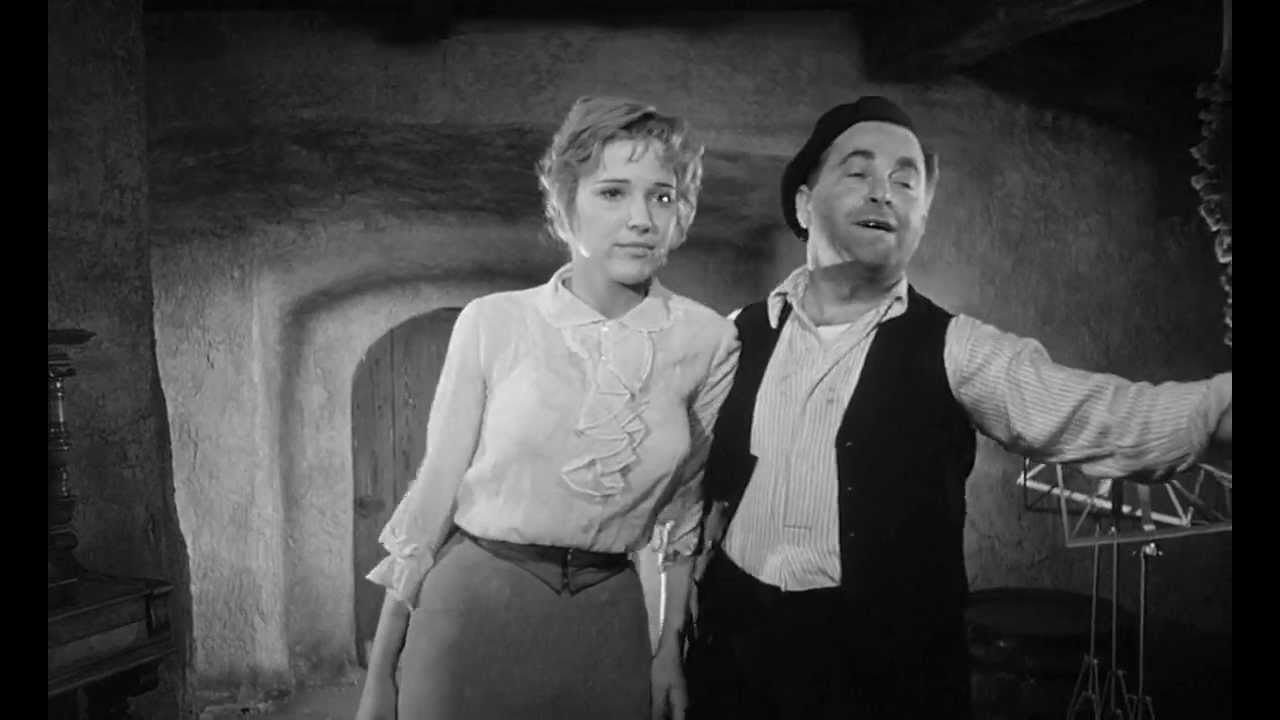 If the most common complaint against Stanley Kubrick’s work is that it’s too cold and emotionless, then the common response would be “have you seen ‘Paths of Glory’?”

The anti-war, World War I drama takes us on a bleak journey from the trenches to the courtroom as French soldiers refused to continue with a suicide attack, only to be court-martialed for cowardice. At the end of the film, a captive German girl (later becoming Kubrick’s wife) is brought in front of the rowdy and drunk French soldiers at an inn. Scared for her life, she starts singing “The Faithful Hussar” and the soldiers can’t help but be touched.

The song in question is a German folk song about a soldier separated from her love, or more accurately, the themes of love in war. It’s the perfect song for the perfect scene at the right time. The soldiers quiet down and start humming along as their faces flush with memories of past lives and loves left behind. From that moment, the German girl ceases to represent the enemy and becomes a person in their eyes.

And with orders given to them to return to the front, it’s easy to see why their colonel lets them enjoy the moment. 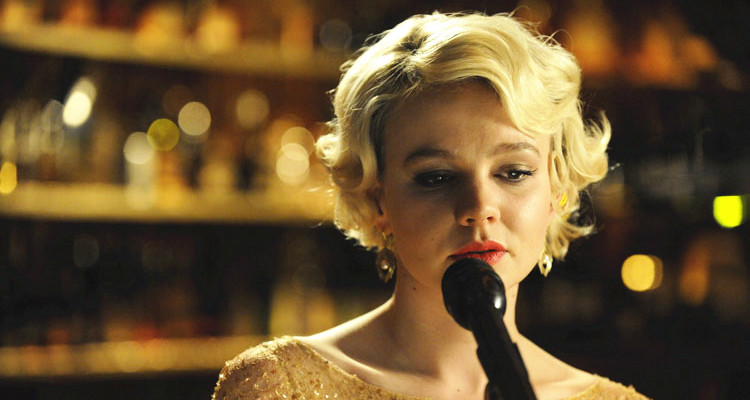 Steve McQueen’s uncompromising study of sexual addiction is a draining and harrowing drama that’s not an easy watch for some. Michael Fassbender and Carey Mulligan give courageous performances as a dysfunctional brother and sister who are damaged by a mysterious past tragedy.

When Fassbender’s Brandon and his boss David go to a bar to watch Mulligan’s Sissy perform, it’s one of the only genuinely beautiful moments of the entire film. Running uninterrupted for almost five minutes, this rendition of “New York, New York” is more haunting and emotional than original Frank Sinatra version.

Her soulful singing touches Brandon and David in different ways. David is most impressed and charmed, while Brandon can relate to the emotion Sissy is singing with. Though he tries, Brandon can’t hide his feelings this time.

Paul Thomas Anderson’s epic ensemble masterpiece has so much in it that it’s a wonder the film didn’t collapse on itself. From its opening sequence to its climax of raining frogs, “Magnolia” has many WTF moments.

The most touching WTF moment comes in the form of an emotional sequence where all the characters sing along to Aimee Mann’s “Wise Up.” While each character is doing something different in different parts of town, they all basically feel the same. They’ve all reached the bottom of their inner pain and as the lyrics allude, they can either wise up and make a change or continue drowning.

Various Aimee Mann songs play in the background of various scenes throughout the film, but when the characters reach the climax of their inner turmoil, “Wise Up” plays front and center, and they can’t ignore it and have to sing along. It’s a sequence that would be perfect in a music video to a pop ballad, yet it works just as well here.

Musical performances are as much a part of David Lynch’s movies as his trademark surrealism and sound design. From his debut feature “Eraserhead” to even his TV show “Twin Peaks,” musical performances play a huge role in most, if not all of his works. Heck, the man is a musician as well with some interesting albums.

The most memorable and iconic musical performance he ever dreamt up, however, comes from the classic “Mulholland Drive.” It features a little bit of everything that Lynch has done with singing performances throughout his film career. It’s beautiful, emotional, haunting, touching, and of course, a little weird.

Getting Rebekah Del Rio to sing a Spanish version of Roy Orbison’s “Crying” and then lip-syncing to it in a hypnotizing performance in the eerie Club Silencio defies words. It’s that amazing. Her voice is simply powerful and intense. It points to the genius of Lynch that he would put the most important moment and the turning point of the entire film in a musical performance.

Club Silencio was so iconic that it inspired a real-life nightclub of the same name in Paris. 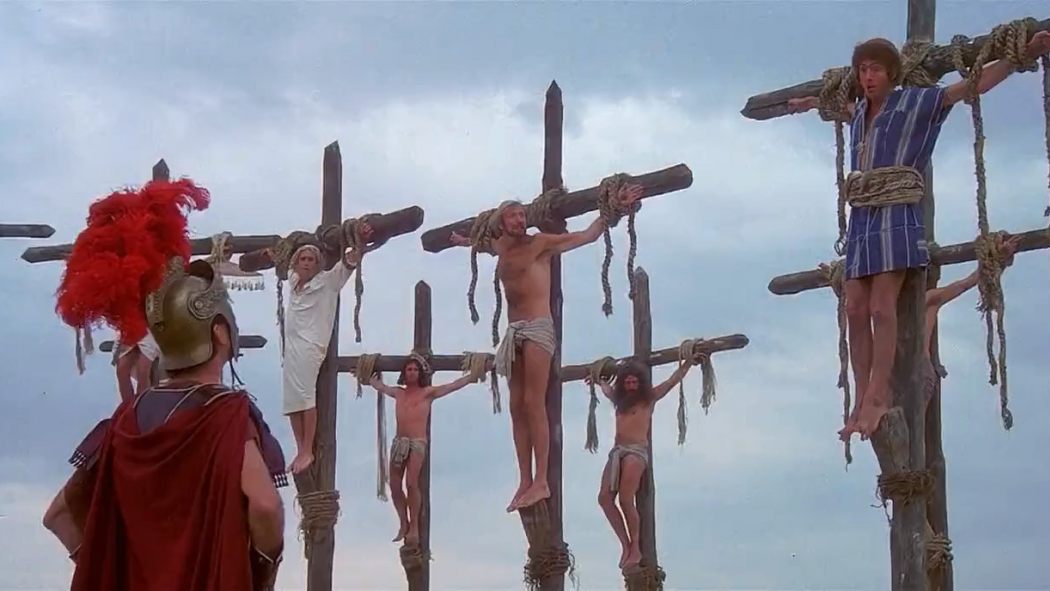 One way to ensure that a film lives on forever is having the perfect ending, and there’s been no greater ending than in “Life of Brian.” Mistaken for Jesus, the film closes with Brian being crucified, and to cheer him up, a fellow character on the cross tries to cheer him up by singing “Always Look on the Bright Side of Life.”

Written by Eric Idle, the song has since become synonymous with public events when looking on the bright side of life is always the option. From football matches, funerals and the London Olympics, the song and scene have become Monty Python’s most well-known creation.

A worldwide hit whose popularity has arguably eclipsed the film it came from, “Always Look on the Bright Side of Life” is not only the best singing performance in film, but one of the best songs ever written.