Each time they meet in a café, they talk before going to a lovely hotel next to the bar, and there they “live their fantasies,” as they both confess to an unseen person who interviews them apart, after the end of their relationship.

As time goes by, they realize, each one for themselves that they are deeply in love with each other. Nevertheless, when they come to talk about their future, she confesses her love but they both agree that it couldn’t work out.They make love one last time and then they never see each other.

So sex produces love. Or is it the other way around? 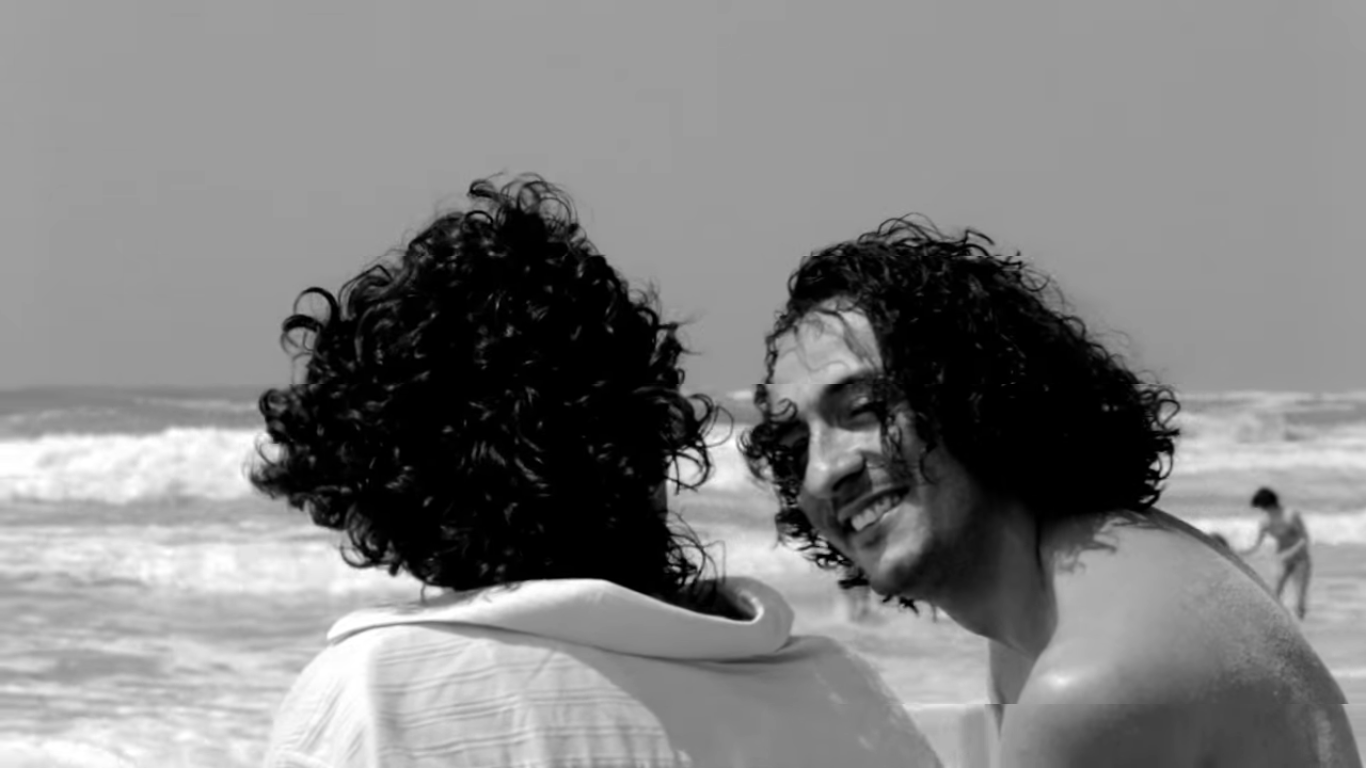 Zizou is an anarchist street poet. He rimes in the streets of Recife and during the nights he makes love to older women in a barrel in his backyard.

Around him there is a vivid community of people who, against their poverty, enjoy life, love and sex. Juliano, Mateus and Tania live, sleep, drink, dance, and play music together. Vitor is the man Marianna has mostly loved through her life. Marianna is the man Vitor has mostly loved in his life!

And then comes Eneida. She comes from the other part of the city, from the wealthy part. They are both fiercely attracted to one another; Zizou dreams of her day and night and she becomes his muse. Yet, they do not dare to have sex. Zizou keeps having sex with his elderly lovers in the barrel and Eneida masturbates in her bed thinking of him. Their love is idealized; on another level, it is somehow poetry.

When, in the national feast of the city, Zizou jumps onto a van crying “anarchy and sex,” Eneida climbs to the van taking off her clothes, ready to unite her body with his in front of all the people, as part of a love ritual. He also takes off his clothes and everybody around waits, holding their breath for the unbelievable to happen. But it doesn’t happen. The riot police breaks in, arrest Zizou and throw him into the river to be eaten by the city’s rats. Symbolic?

The loving couple of this movie share disabilities: one is physically and the other mentally crippled. Endre, a chief financial official in an abattoir, is a handsome man with a lame left hand. Maria, a pretty young woman who comes to work as an inspector, is an Asperger autistic, as we come to know through her reactions, and she is constantly learning how to feel and behave.

However, their disabilities are not seen as a deficiency, rather as a way to perceive reality through a different prism. Endre and Maria share every night the sema dream: they are the male and female deer who run wild in the forest.

Here the love path follows a very distinct way. From subconscious to conscious, from dream to reality, from isolation to love. In this film, in this story, sex comes to crown the mating of the souls in a most beautiful and bizarre lovemaking scene.

In some movies it is love that prevails; in others, like this one, it is purely sex. It is the story of a dysfunctional, young and handsome executive who lives alone in a flat in New York, where he passes his days watching pornography and taking on one night stands, as he is incapable of having any kind of emotional involvement with people.

When his younger sister Sissy arrives unexpectedly for an infinite stay, the fluidness of uncontrolled sentimentality she brings into his life is unbearable – their emotional instability that reaches the extremes of frigidity on one hand, or hypersensitivity on the other, is due to an undefined past of abuse and love deficiency – and Brandon, the young hero, gets out of control.

12. The Unbearable Lightness of Being (Philip Kaufman, 1988) 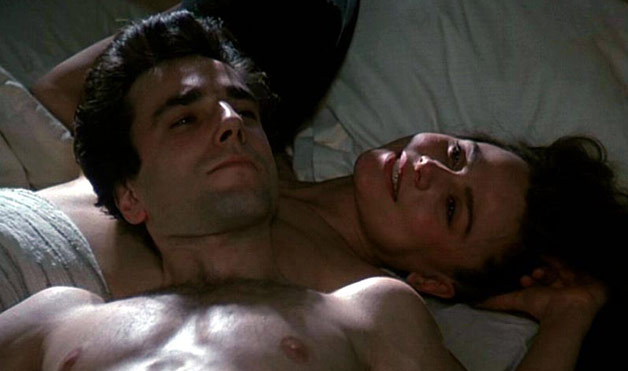 “Every woman has a slight difference, a particularity when she had sex. Like the woman he made love this afternoon, that got red spots in her face while having an orgasm. Tomas was searching this particularity in every woman he hunted.”

That is more or less how Kundera describes his protagonist in the homonymous novel in which the movie was based. Tomas is a doctor who lives in Prague under the socialist regime and he is a devoted womanizer. When he is not practicing medicine, he is after women. All kinds of women. Tall and short, beautiful and less beautiful, artists and waitresses. Being divorced, he steadily avoids any kind of commitment and simply enjoys sex.

And then comes Tereza. A waitress from a small Czechoslovakian town who moves to Prague and into Tomas’ life. Tereza is a strict monogamist; she believes that making love with someone is absolutely tied with feeling love for someone. She wants Tomas just for herself and suffers from his infidelities. Their relationship seems to be a struggle between absolute devotion and limitless freedom.

Absolute devotion is what finally wins in this story. Or love over sex. Tomas and Tereza finally find happiness isolated in a small village, with elementary goods and, most importantly, each other. 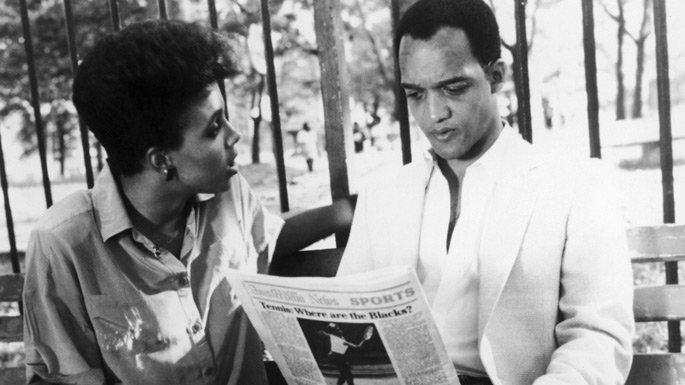 Among all those social dramas, here comes a comedy! The first feature of Spike Lee is an urban case study, the story of Nora, a liberated young African-American woman who doesn’t want to be restrained by social conventions. Why only one boyfriend when she can have three?

She lives in an impressive studio in downtown New York, with a king-size double bed in the middle, lighted by more than a hundred candles, and there she receives her loving mates to have sex and fun with them. Because having sex is having fun… and the opposite.

Though she’s attracted to and in love with Jamie, she finds it is natural to have more than one lover… because love is one thing and sex is another.

Nobody else but her finds this attitude and her beliefs normal. Jamie is hurt for her not being exclusively his; Greer, her other lover, accuses her of being a sex addict and suggest that she sees a therapist. Mars (Spike Lee), the ‘underpants’ man, wonders why he is not the chosen one. Everyone believes she’s gotta have it.

But no. Nora goes her own way, leaving Jamie behind when he blackmails her that it would be only him or nothing, a modern heroine of the post-feminist era. She goes on searching for her gender and sexual identity, she goes on questioning the relationship between love and sex with no taboos or prohibitions. A genuine Spike Lee suffragette! Or Simone de Beauvoir! Gloria Steinem? Angela Davis? All of them? None of them? Just the girl next door? 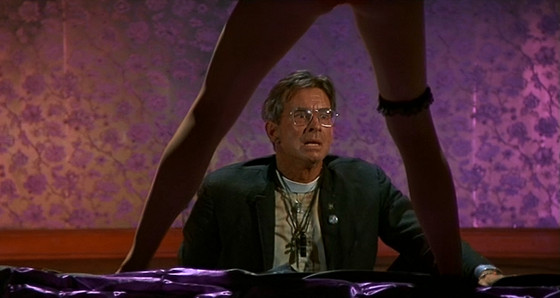 A film that was quickly forgotten, one more of Russell’s provocative version of stories on sexuality linked with prostitution. And where is love found in this context?

Joanna Crane is a fashion designer who every night turns herself into ‘China Blue,’ a sex worker who fulfills the inner sadomasochist desires of men. She herself avoids any close contact and gets pleasure through these distorted relations. Until one day Peter arrives at her door as a customer. Peter is a father of two, unhappily trapped in a marriage that no longer means anything to him.

As he reaches China Blue searching for new experiences, their sexual mating has such an inner force that changes both their lives. It leads him to leave his family and her to reconsider her stances about sex and love.

Corporal contact may be a means to discover what links someone with the other and forward a relationship to the next step. Bodies mostly speak more frankly than language.

Last but not least, a movie about love – and sexual pleasure – in a totally different, new age, digital frame. An original screenplay that was awarded an Oscar, this movie approaches man-woman relationships in the times of developed operating systems.

Theodore is a lonely writer who finally finds comfort and understanding with Samantha, his newly bought operating system with the highest level of artificial intelligence on the market. What a relief! Somebody always there to listen to you, share your thoughts, soothe you and console you, excite you and amuse you, make you feel special without ever hurting you. Somebody available all day and all night.

What’s wrong with having no touch? Or smells? Or sight? Or taste? In the digital age, a relationship can be based on hearing only. Seems that what we mostly need is being heard.

No, we also need exclusiveness. Maybe sex may change form, it may not mean the meeting of two – or more – bodies but something totally different, but the quintessence of love, the preferred one, that cannot change even in a relationship with a device. In love we need to be the one, not one in a million.