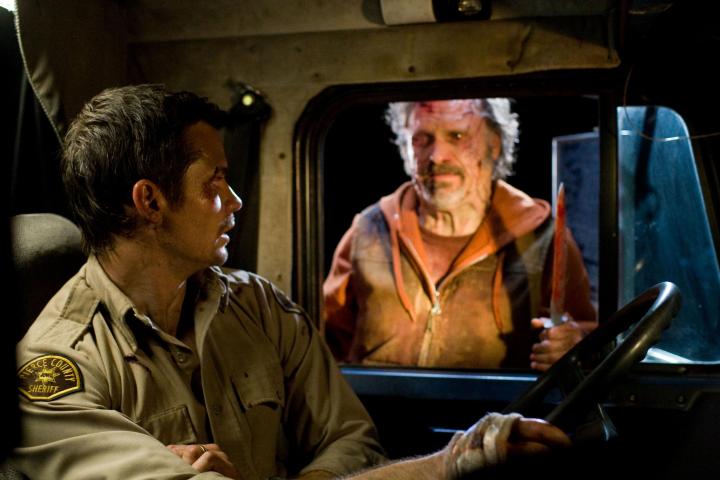 Breck Eisner gives us a zombie film. A film that has all the classic zombie movie elements. One day after work, Sheriff David Dutton and his deputy Russell Clan are watching a local baseball game when the town drunk comes lurching into the outfield holding a shotgun. When the autopsy shows that he had no alcohol in his body, that’s the first signal something is wrong in Ogden Marsh.

The sheriff’s wife Judy is the local doctor. She starts treating some bizarre cases. Nobody can get the mayor to declare an emergency, because he is a descendant of the mayor from “Jaws,” perhaps? Meanwhile, it’s up to David, Judy and Russell to defend themselves from zombies, and survive after the town is isolated and quarantined. In an effort to keep the madness contained, the government uses deadly force to close off all access and won’t let anyone in or out – even those who are uninfected.

Movies like this are fairly simple to write. You need zombies. You need heroes. At first there’s mystery, and then the horror. But if you don’t bring something new to the table, there is no meaning. I believe that “The Crazies” is true to the genre and a watchable addition.

It is true that James Gunn isn’t very popular right now. But this is not the place to discuss it. Feel what you feel about Gunn, you have to admit that he was one of the busiest people on the planet for a while. He is a huge film nerd and loves all genres. He is especially soft on horror. “Slither” is one of the best horror films of the 21st century. It has gore, it has thrills, it has humor. It is fun to watch.

The movie stars Nathan Fillion and Elizabeth Banks. It is Gunn’s directorial debut, as well as the first time Fillion would take the lead role in a multi-million dollar movie. “Slither” is a mashup of everything people love about 80’s horror movies, including body horror and creature effects. A meteorite lands on a town, getting people infected by worms that burrow into the brain, zombifying the victims, and turning them into the pawns of the alien, portrayed by the great Michael Rooker.

“Slither” is an homage to gory B-movie horror films. While not a massive commercial success, the film is a cult classic.

This U.K. movie written and directed by Joe Cornish was an instant hit among horror fans. Starring John Boyega and Jodie Whittaker, there is no doubt that the cast is strong. The premise is golden as well. A teen gang in South London defend their block from an alien invasion. It is all very “Shaun of the Dead.” Even Nick Frost is in the movie.

Cornish has stated that watching “Signs” by Shyamalan and imagining what would happen if it took place in South London was an inspiration for “Attack the Block.” It certainly left a better impression on a lot of people, including me.

The movie starts with a mugging that happened to Cornish in real life. A familiar situation is cleverly exploited, the characters gradually become individuals, and the admirable moral of it all is that actions have consequences.

“Pandorum” takes us to space, zeroing in on two astronauts — played by Dennis Quaid and Ben Foster — who wake up with amnesia aboard a seemingly abandoned spacecraft, only to discover they are not alone. How familiar! It resembles sci-fi horror greats “Event Horizon” and the Alien franchise. Only managing to claw back $20 million of its reported $33 million budget, “Pandorum” sank into the darkest corners or the genre, bankrupting the production company in the process.

The movie features a cast at the top of their game, led by a brilliant Dennis Quaid. He’s more than supported during this process by appropriately distressed turns from fellow officers Foster and Cam Gigandet, but it’s in the supporting cast where the heavy lifting really takes place, including Antje Traue, Cung Le and Norman Reedus.

This is classic sci-fi, at its best. Forgoing any lengthy backstories, the audience is thrown straight into the unfamiliar and terrifying world that the story’s protagonists have found themselves thrust into. You share their anxiety, their terror. The whole movie is one huge rollercoaster ride to the finish line, where a suitably mind-bending plot twist awaits.

On top of this list, a favorite of mine wears the crown. Shot by Danny Boyle, “28 Days Later…” changed the game. What Romero started, Boyle took to another level. Zombies were always more than zombies. They represented something. In Romero’s movies, they were used to criticize the consumer society. In Boyle’s cult classic, he focuses on human nature and violence.

While the Alex Garland-penned “28 Days Later” proved to be different from the zombie movies that had come before, it was still situated in the legacy of George A. Romero. With “Night of the Living Dead (1968)”, Romero not only helped usher in a wave of independent horror, but created the birth of the modern zombie.

Boyle does not consider “28 Days Later” as a zombie movie. Though he has made note of his influence from Romero’s “Dead” trilogy, he cites the post-apocalyptic novel “The Day of the Triffids” as Garland’s inspiration for Jim’s journey through a society that has been deserted.

While so many of the films outside of Romero’s were most interested in the creatures themselves and the amount of gore they produced, Boyle took a step back to reflect on what an outbreak would mean for society and its rules. “28 Days Later” is a smart, engaging movie that leads its characters into situations where everything depends on their understanding of human nature.