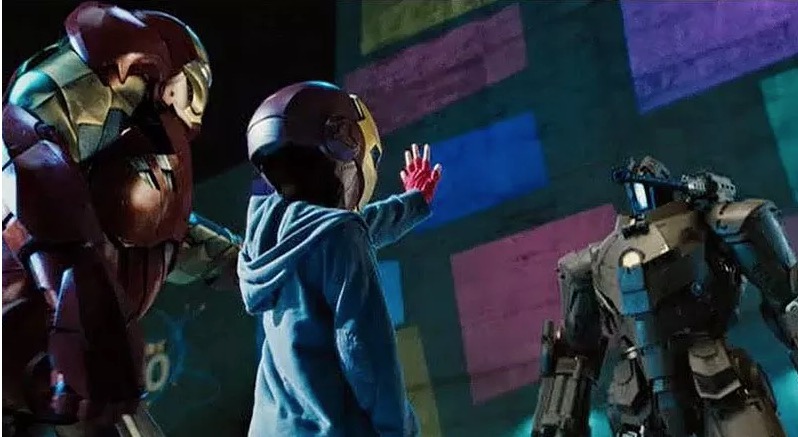 An rare and odd exception for an Easter egg – its seed was planted close to a decade ago but due to rights issues, it can only now be officially reported as a full-blown canon reference inside the ever-profitable Marvel Connected Universe. In Jon Favreau’s messy sequel to his seminal superhero movie, the final reel features a frenetic face-off between Robert Downey Jr.’s armour-suited hero and an army of psycho androids at a weapons expo gone horribly wrong.

In one uplifting moment, a robot scares off a crowd with its machine gun set to target. One brave little tyke decked out in an Iron Man mask and glove stands tall against the assailant and holds his glove up to threaten, and the real Iron Man secretly swoops in and blasts the robot away, throwing the kid some props before flying back into battle. It was a cute little moment that had a strange air of significance to it, yet was quickly forgotten by most as the studio moved on to better and bigger movies.

Well, since “Captain America: Civil War” (2016) officially accepted Spider-Man into the MCU, the newly anointed version of that superhero (actor Tom Holland) has confirmed that the kid was no other than a young Peter Parker. Before that, the character was caught up in a sticky web of rights issues; despite being a Marvel character, he was held captive by Sony’s exclusive film production rights and a series of decreasingly quality movies. Now that both companies are in bed together, the Easter egg can fascinatingly be dug up in a bizarre and retroactive manner.

While most fans of the “Friday the 13th” franchise were excited for original producer/director Sean S. Cunningham to return in some capacity for this ninth entry, its mandate to shake up the franchise led to a lukewarm audience reception. One thing’s for sure, though – it managed to have two fun references to other horror franchises that stood as its highlights. Number one is the memorable moment were Freddy Krueger’s clawed hand drags Jason’s mask quite literally into hell, which of course (love it or hate it) led to the monster mash “Freddy vs. Jason” (2003).

The other less mentioned one is the vital book needed to vanquish Jason’s soul/slug/whatever, which looks like a nasty and familiar piece of reading material. The prop itself is none other than the “Necronomicon Ex Mortis”, the infamous book that possesses the dead in Sam Raimi’s “Evil Dead” franchise. The piece was borrowed (supposedly without permission) from a shared effects house that, along with the Skull Dagger prop which was also heavily used in Raimi’s series, created a clear link between both franchises.

Regardless, the failure both critically and financially of this movie led to this link never being embellished in other entries – that is, until development was ramping up for a “Freddy vs. Jason” sequel, one that would involve Bruce Campbell’s Ash battling both horror icons. Things reached script stage before Raimi himself killed the project due to a serious dislike for the story, and the script was later converted into a comic mini-series ”Freddy vs. Jason vs. Ash” instead. 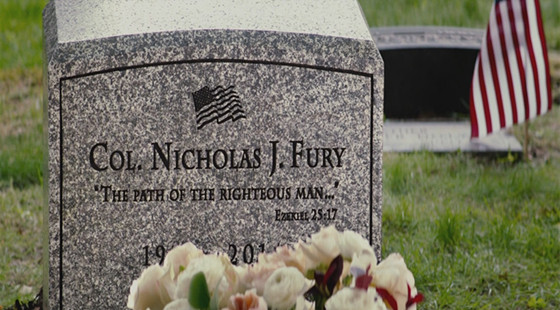 A vital piece of glue in Marvel’s Phase One was Samuel L. Jackson’s Nick Fury, director of S.H.I.E.L.D and all around eye-patched badass – the character was pivotal to assembling the Avengers but he didn’t have many chances to shine in the action department until his epic car chase in the sequel to “Captain America”. The character would soon bite the dust in tragic fashion, although not surprisingly for Marvel, it was all a fake-out ploy and he was really alive the whole time!

Still, that didn’t mean the filmmakers would miss a great opportunity for a classic inside joke for Jackson’s fans. As Captain America is visiting Fury’s grave, you can spot a Bible quote on his gravestone. Yet it’s not just any old quote – it reads “Path of the Righteous Man – Ezekiel 25:17”, a hilarious wink to Jackson’s famous monologue in his star making turn in Quentin Tarantino’s “Pulp Fiction” (1994).

So the Spielberg/Lucas Easter egg love-fest continues here after Spielberg made sly references to “Star Wars” in “Close Encounters of the Third Kind” (1977) and “E.T. the Extra-Terrestrial” (1982), Lucas eventually returned the favour with his first entry into the highly-maligned prequel series. Natalie Portman’s emotionally limited Queen Amidala holds a conference with a variety of galactic species to champion federation tax reform, or something close to that extent.

The scene is fairly uninvolving aside from a fun little reference – in one of the politician’s pulpits is none other than E.T. himself! Well, whether it’s specifically the titular lovable alien is a little up for debate, but there’s no arguing that it definitely contains his species brethren as active participants in Portman’s dead-eyed politicking.

4. Battle of the Easter eggs – various by Sam Raimi and Wes Craven 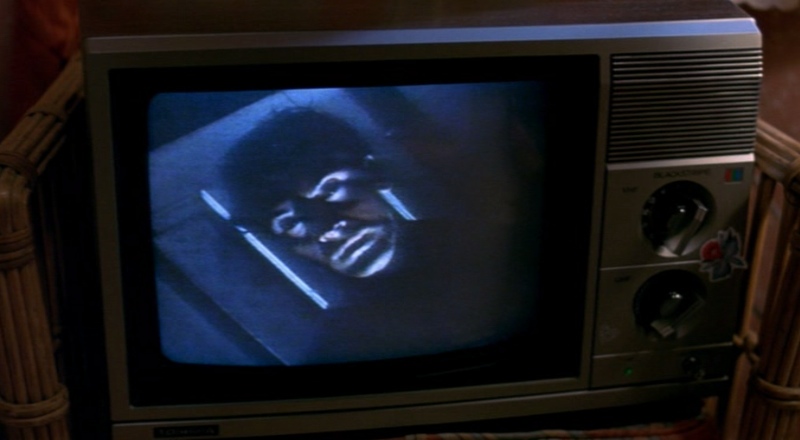 Now this was a unique and entertaining match-off between the two horror greats Wes Craven and Sam Raimi. When Craven made his harrowing sophomore effort “The Hills Have Eyes” (1977), his aggressive and depraved brand of scares set out to shock and surpass all horror that came before. This point was blatantly made in the disturbing camper attack as mutant assailants come across a torn-up poster of “Jaws” (1975), a defiant way of throwing up the middle finger to what was regarded as the ultimate horror experience a few years prior.

In the early 80s, Raimi was the new kid on the horror block and took notice of Craven’s cheeky reference, in turn throwing down the gauntlet in his rough-edged classic debut “Evil Dead” (1981), where a creepy trek through a haunted basement revealed a torn up poster of Craven’s “The Hills Have Eyes” in the background.

Craven wasn’t going to let this young punk show him up and came back in his iconic terror fest “A Nightmare on Elm Street” (1984), where a pre-fame Johnny Depp watches “Evil Dead” on his TV moments before falling asleep and getting sucked into his bed by villain Krueger and getting grinded into what can only be described an epic flood of excessive blood that would even give Stanley Kubrick pause.

Raimi wasn’t startled by the old pro taking shots at him, as he returned to his self-made franchise with its epic sequel “Evil Dead 2” (1987) with an ax to grind. As Bruce Campbell’s hapless hero battles the reanimated and headless body of his deceased girlfriend, one can see Krueger’s trademark razor-fingered glove hanging on the worksheet wall. In all fairness, it’s a blink-or-miss-it moment and much easier to make out on the old pan-and-scan VHS copy, but nonetheless it’s there.

One can argue that Craven attempted to shoot back by hiring Raimi’s brother and good luck charm Ted as a supporting player in his hyped slasher “Shocker” (1989) – only for the actor to be brutally and swiftly murdered. Yet Craven never confirmed it was a deliberate move; not to mention, the film bombed with critics and audiences alike so it’s safe to say Raimi came out the champ in this conclusion. 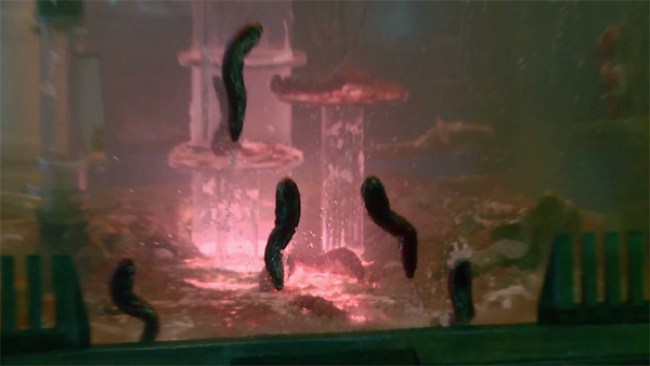 Before the unexpected mega-success of Marvel’s oddball entry “Guardians”, director James Gunn was a low-key genre director with a strong cult following. If one needed proof of his early power behind the camera, look no further then his excellent horror/comedy “Slither” (2006), featuring alien slugs infecting a small US town with slimy or just plain gross (*cough* Michael Rooker *cough*) results.

During Gunn’s transition to the Marvel A-list, the director still couldn’t resist the chance for a fun nod to his criminally overlooked feature for its loyal fans. As the Guardians meet and greet Benicio Del Toro’s ‘Watcher’ and walk through his vast and varied collections of species, sharp-eyed viewers can catch a glimpses of a glass prism containing those infamous slugs sliming about. 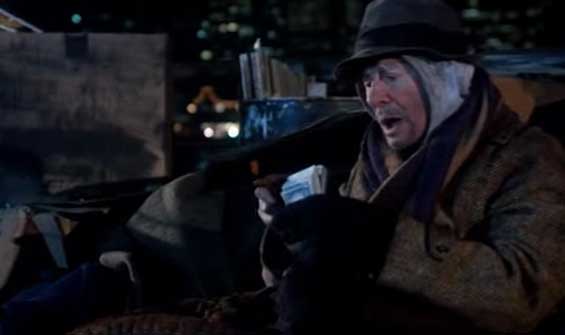 Closing off John Landis’ near impeccable run throughout the 80s (before things dipped considerably), his hilarious second collaboration with Eddie Murphy centred around the actor’s humble African Prince Akeem moving to New York to find true love, and as the famous expression goes – hilarious consequences ensue. It’s by far one of the best Eddie Murphy vehicles and a great display of Landis’ talents at off-the-wall comedy, grounded by likeable characters and an involving plot.

Although word was that Landis and Murphy constantly clashed on the set, the two still managed to throw a cute and quick reference to their earlier collaboration “Trading Places” (1983). That film followed the high concept pitch of Dan Aykroyd’s privileged stock broker having his fate switched with Murphy’s homeless hustler, all orchestrated by the disgustingly wealthy Duke brothers Randolph (Ralph Bellamy) and Mortimer (Don Ameche). The film’s finale involves the two hapless victims squashing their antagonism and getting revenge on the vindictive Dukes by reducing them to penniless chumps.

Jump to Murphy’s later vehicle as he romantically strolls down New York’s waterfront with his love interest, and in a kind gesture hands a sleeping homeless man an envelope of ridiculous money. That homeless man turns out to be a haggard Ameche, who wakes a sleeping Bellamy from under a pile of rubbish. “Mortimer, we’re back!”, the latter states as Elmer Bernstein’s recognisable theme strings play.

1. The Oldsmobile – every Sam Raimi movie made 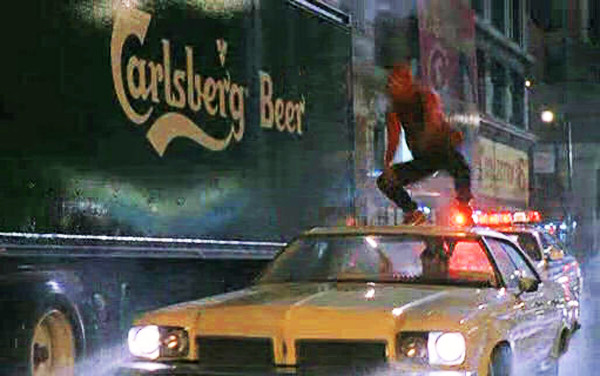 Sam Raimi claims another notch as the master champion of Easter eggs in the cinematic medium, and this one concerns his obsessive need to place his sturdy 1973 Oldsmobile Delta 88 car into (almost) every film he’s made. It was the trademark vehicle of Bruce Campbell’s hero from the ‘Evil Dead’ franchise (even appearing in the remake and TV show), Uncle Ben’s car in the “Spider-Man” movies, and part of the a wacky helicopter/highway chase in “Darkman” (1990).

If the reliable automobile is missing from his filmography, it’s for understandable reasoning – “For the Love of the Game” (1999) had it’s cameo end up on the cutting room floor; Raimi’s western throwback “The Quick and the Dead” (1995) features the car hidden under a tarp in the background of a scene; and “Oz: The Great and Powerful” (2013) just couldn’t find a reasonable explanation to put it in, although rumours are that pieces of the vehicle are featured throughout.

Raimi’s vital need to have the Delta 88 appear in every movie in some shape or form would lead to the conclusion that it’s the result of an compulsive disorder or obsessive superstition, yet the director’s longtime friend and collaborator Campbell has a much simpler explanation – it’s the car he lost his virginity in.