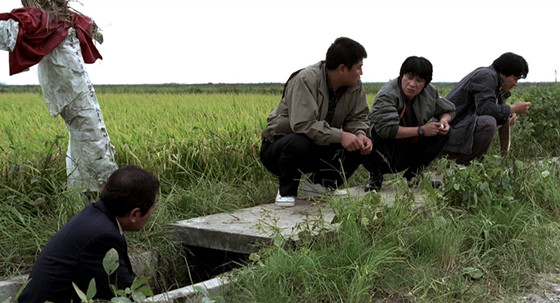 Inspired by the true story of the Hwaseong serial killings, considered the most infamous sequence of murders in South Korea’s history, Memories Of Murder helped to put Korean cinema on the map during the 00s. Like the Zodiac killings, these murders were unsolved, making them a source of paranoia in Korea that lingers until this day. It starts on a calm autumn afternoon, where our protagonists find a dead woman bound and gagged in a ditch. It shows, quite matter-of-factly, how such evil can exist in what is otherwise picturesque surroundings, making it a larger and more potent metaphor for society as a whole.

The cops initially try and solve the case like they would any other; gathering clues, talking to witnesses, interrogating the usual suspects. But when another dead woman is found nearby it soon emerges that this is no ordinary case. It is a slow and thoughtful film filled with a sense of constant unease, made worse by the limited resources these cops have in dealing with the case. Although there is no sense of closure, the feeling of suspense Joon-ho builds up throughout the movie makes it one of the best thrillers in recent memory.

Rarely has any film matched its themes with its setting so perfectly as The Third Man. Set and filmed in Vienna in the aftermath of World War II, it is the first masterpiece of the Cold War era — a tale of paranoia set against a city trying to rediscover its identity.

The central conceit is perfect. Holly Martens (Joseph Cotton) goes to the city in the expectation of finding a new job from his old friend Harry Lime (Orson Welles) only to discover that he has recently died. However, when he tries to get to the bottom of Harry’s murder, he quickly understands that not everything is exactly as it seems. The result is easily one of the best British films ever made.

The Third Man is a masterpiece of suspense due to the way it reveals crucial information (spoilers incoming). Think of the way we finally meet Harry. First we follow the path of a cat, then we see it rest against somebody’s feet, before the camera pans up to Harry’s face, glinting in the light. It works so well because of the pre-knowledge filmgoers have of the famous Orson Welles. Almost immediately film history is made. This is just one excellently directed scene of many, and the main reason The Third Man holds up so well after all this time.

Described by many critics as the closest to perfection that any film has ever been, Chinatown remains the finest neo-noir of the 1970s. Set in a California locale riff with corruption, Richard Towne’s screenplay puts one element on top of each other with immense precision, finally culminating in a shock ending that is near impossible to predict.

Jack Nicholson stars as J.J. Gittes, a Philip Marlowe-like private dick who is called upon to investigate a woman’s husband who works for the Los Angeles Department of Water and Power. But right from the beginning nothing is as its seems, and he soon uncovers a conspiracy which will challenge his view of human nature.

It is ultimately a tragic film, with a pessimistic view of human nature. It came during the brave years of the New Hollywood era, where filmmakers weren’t afraid to commit to downbeat endings. Still reeling from the murder of his wife Sharon Tate by the Manson murderers, the film shows Polanski exorcising his demons through a visceral and necessary work. Polanski would soon be exiled from the United States in disgrace. Chinatown remains the pinnacle of his career, a mixture of arthouse and Hollywood that has rarely been topped since.

Henri-George Clouzot is unfairly known as France’s answer to Hitchcock. This does him a disservice as his movies are absolutely brilliant in their own right, with their own distinct style. His best film is Diabolique, which seems to set up an unanswerable mystery only for it to be resolved in the most ingenious way possible.

It starts in one of the most dreadful of places, a boarding school, run by a headmaster who loves to make life miserable for his students. A fellow teacher has a plan to get rid of him by drowning him in a bath before disposing of him in a swimming pool in order to make it looks like an accident. But after the so-called plan is carried out, his body mysteriously disappears, and no one can come up with an explanation.

Clouzot employed a minimalist and stark style that seems to have as much in common with Bresson as it does with Hitchcock. He doesn’t rely on any cheap scares or gimmicky techniques, instead slowly building up a story that simply grows in fear and dread. This murder mystery is excellently balanced out by Charles Vanel as Inspector Fichet, a man who pretends to be dim-witted as a deliberate tactic to solve the crime. The way it finally plays out would’ve made Agatha Christie proud.

The premise of Rear Window is deceptively simple, but these limitations actually enable Hitchcock to work at the full height of his powers. From what seems like such a basic idea, the master of suspense creates a whole world that doubles up as a meta-commentary on the world of film itself.

The result is a film that keeps you on your toes from the beginning to the end. It stars James Stewart as a man who, upon breaking his leg, decides to spend his time spying on his neighbours. Then one day he finally suspects that a crime has taken place, and he has to piece together the clues, all the while being unable to move himself.

What makes the film so clever is the way it uses its main protagonist and his camera as a way of making us a passive observer of events just like him. We cannot enter the movie screen and influence events, but we can simply watch and see them as they unfold. James Stewart is the perfect conduit for the audience here. So often called upon to play the everyman in the Golden Age of Hollywood cinema, we quickly sympathise with his position. From there Alfred Hitchcock creates a masterpiece of suspense that is easily up there with his best movies.