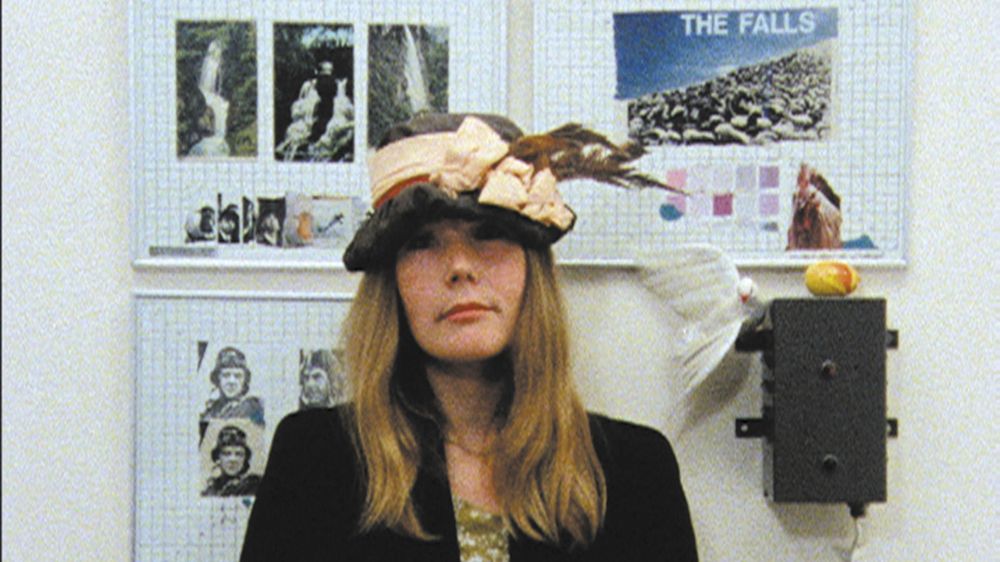 Greenaway’s first feature film, The Falls is perhaps the director’s most experimental movie, at least in terms of form. The movie is perhaps described as a mockumentary, comprised of 92 short film segments. It outlines the aftermath of an incident simply known as the V.U.E. (Violent Unknown Event), which has left the survivors of the world with many new gifts including immortality.

It is fruitless to try and outline all of the many individuals and events detailed in this faux-interviews as their are too many to pick from, but rest assured they are as engaging and creative as any of Greenaway’s characters.

Before The Falls, Greenaway had an active film career, sticking to only short films, so although this was his debut for a feature length project, he was not exactly out of his element. His technique is not as perfected, his frames not as gorgeous or packed with symbolism and his vision not as strong as the films of his later career but there is something about The Falls that is very appealing.

It is ambitious but it does not carry with it a lot of the pretension and dourness of many of Greenaway’s movies. In fact, Greenaway even attempts to make some of the film’s comedy obvious, instead of masking it in seriousness like he often does. Unpolished and overly long, Greenaway’s debut is certainly a raw film, but it is also one of his most fun. 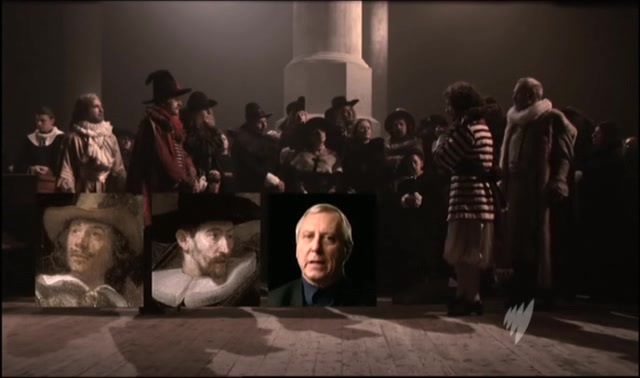 A sister piece to his 2007 film Nightwatching, Greenaway’s documentary is a fascinating combination of form, social criticism and persuasive conspiracy. As in Nightwatching, he poses that Rembrandt’s painting, “The Night Watch”, hides an accusation of murder towards the depicted party.

This conspiracy, however, while the focus is not the intent of the film. Instead, Greenaway wished to convey the lack of “visual literacy” in the modern world: how people can dissect the written and spoken word for hidden meanings but not pick up on visual subtleties, such as in a painting.

With the before stated murder claim as a hypothesis, Greenaway goes forth taking apart small parts of the painting in order to provide evidence for his claim. Broken up into 34 “mysteries”, the documentary speeds along,not towards any sort of great conclusion, instead simply keeping tempo with the intriguing persuasive techniques used by the director.

The film is made up of various types of footage, chiefly close-ups from the painting, often accompanied by Greenaway’s talking head, as well as re-enactments taking from Nightwatching. It is not his most ambitious project, but considering its intent, might be his most important when you realize that it doubles as instructions to decode the mysteries hidden in the frames of his own films. 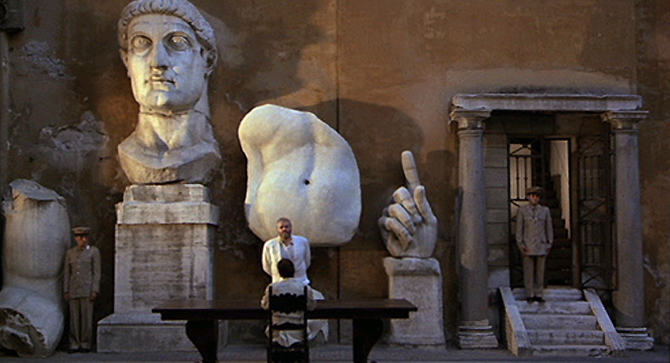 Brian Dennehy stars as architect Stanley Kracklite, an American who comes to Rome in order to arrange an exhibition in honor of his idol, Roman architect Boulee.

While at first optimistic about the opportunity, Kracklite soon finds his world crumbling around him. His wife begins an affair with an organizer of the convention and distances herself from him, despite being pregnant with their child. The other architects lose faith in the exhibition as they doubt Kracklite and Boulee’s importance. Finally, Kraklite becomes ill with severe stomach pains, hence the title of the film, and loses all focus on his work, delving into bizarre obsessions.

In many ways, The Belly of an Architect is the most simplistic works of Greenaway as a director. This is not, however, a bad thing. While on the surface, the events and people are just as weird as in other films, the overall feeling is not as alien and baffling as the rest.

There are a few reasons for this. One is that Dennehy’s character is so central to the plot, whereas in other Greenaway film’s, a larger important cast of characters has a way of preventing the viewers from relating to the people.

Another is Greenaway’s focus and framing. The shots are as grandiose as ever, but they are less cluttered with possible symbols, making clear to the viewer the intent of the shot. Although it may not feel as unique to the director as others, the film shows that beneath his iconic style is a skilled craftsman who fully understands the medium. 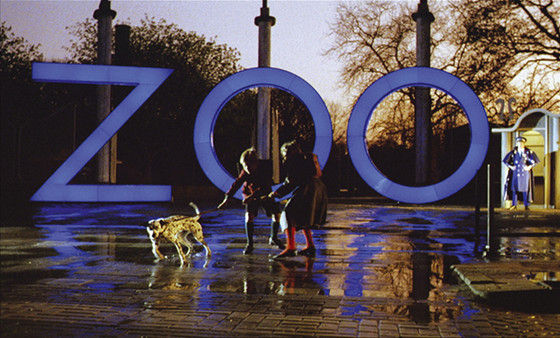 A Zed and Two Noughts, a title symbolizing the word ‘zoo’, where much of the film takes place, is a scrambled but highly engaging picture.

It follows two twin zoologists who are struck by tragedy when both of their wives die in a car crash. They become obsessed with death, and more specifically decay, as they begin videotaping organic matter rotting. They start with an apple but as their obsession grows, they move up the food chain. Along the way, they also meet and begin relations with Alba, an amputee woman who was also in the car crash with their wives.

The sheer amount of ideas addressed in this film make it a little difficult to decipher upon first viewing, all that Greenaway is trying to say. Found are themes of duality in the twins, ‘nature vs man’ in the zoo, ‘death vs. life’ with the decay videos and many more deep motifs.

It is unclear exactly to what end he is trying to weave these all together, but it is certainly a lot of fun to try and figure it out. The imagery is some of the most odd and exciting of Greenaway’s career and the music by Nyman is at its best. Not the quickest paced or structurally sound of all his pictures, A Zed and Two Noughts is a visual and mental treat. 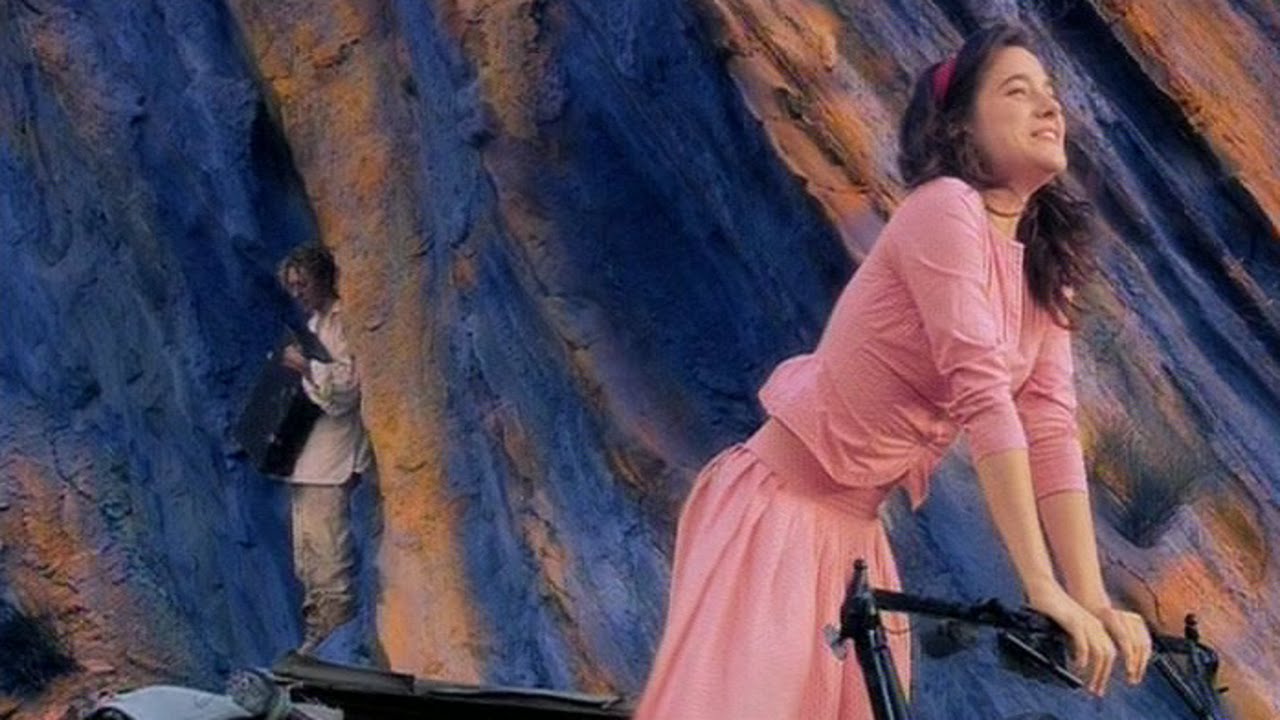 By far Greenaway’s most ambitious and sprawling projects, and one of the largest by any director really, The Tulse Luper Suitcases is a multimedia work spreading across many years. The entire set is comprised of two books and, within the scope of this list, three feature films: Part 1: The Moab Story, Part 2: Vaux to the Sea and Part 3: From Sark to Finish. The purpose of these works was, curiously, to inspire web developers to create 92 different suitcase-based flash games.

The anthology follows the titular Tulse Luper, a traveler who has wandered through any incredible events throughout history. In 1911, the story starts and Luper is present in Utah where uranium was discovered. He was present at various events throughout World War II in Europe and all the way till 1989 at the fall of the Berlin Wall.

After the completion of the online suitcase games, Greenaway released another film, A Life in Suitcases to cap off the series. Tracking down all of these pieces of the puzzle can be challenging and then the long task of watching all the films is daunting as well, but the breadth does justify itself and the final effect is quite remarkable. 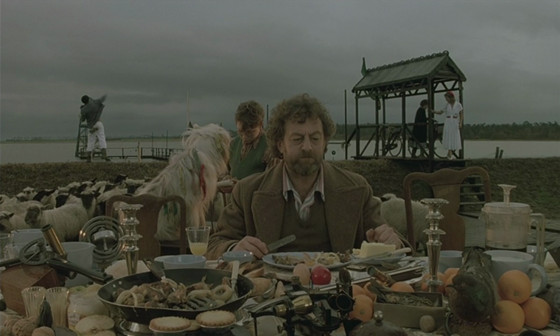 One of the most strange of Greenaway’s early films, Drowning by Numbers is a bizarre, somewhat unintelligible stylistic masterpiece with an enticing plot. The story follows a coroner named Madgett, played by Bernard Hill, who falls under the spell of three women. The women, an old woman, her daughter and her niece all kill their husbands by drowning and then promise Madgett various, mostly sexual favors, in exchange for him covering up the deaths.

Surrounding the events, the film is packed with symbols and details related to childhood games. The numbers 1-100 all make an appearance in order in the film, sometimes obviously set in the forefront somethings heard in passing dialogue. Other whimsical activities similarly fill the story, juxtaposing with the deadly, sinister plans of the three women.

Like most Greenaway films, it is gorgeously shot, often filled with more information than the viewer can make do with. The ideas explored in the film may not be as deep and sincere as in some others, but his craft and visual style are at their best.

The Cook, The Thief, His Wife & Her Lover is probably Greenaway’s most famous and critically acclaimed film. The Cook, Richard Boarst, is the head chef of the restaurant ‘Le Hollandais’, a gourmet restaurant which has been taken over by the brutal gangster Albert Spica, played by Michael Gambon.

Every night, Spica dines at ‘Le Hollandais’, joined by his reluctant wife Georgina, played by Helen Mirren, and with his outbursts of profanity and violence, scares away the patrons and upsets the staff. Bored, Georgina, starts up an affair with a regular at the restaurant, Michael, and with the help of the staff, slips away every night to meet him.

Greenaway is still somewhat restrained in his aesthetic style in this one, and while there is grandiose formalism and blatant stylization, it is absent of his, now trademark, multi-screen effects-filled sequences. Again, it is accompanied by a propelling soundtrack by Michael Nyman.

One of the most notable changes in the film, not necessarily for better or worse, is its increase gratuitous violence and nudity, earning the film an X rating. Another stand out factor are the particularly powerful performances by Mirren and Gambon. While the film’s content may be off putting to some, its style is gorgeous and Greenaway’s direction make it one of the greatest British films of its era.

Peter Greenaway’s masterpiece was also one of his earliest efforts. After more experimental works like his short films and The Falls, The Draughtsman’s Contract is one the director’s more conventional films, from an aesthetic and storytelling perspective. That is not to say, however, that it is not a revolutionary work or could have ever been made by anyone but Greenaway.

The film is a grandiose murder mystery, although it has quite a different feeling than most. Anthony Higgins stars as Mr. Neville, an artist brought in to paint twelve landscapes at the estate of the Herberts. An arrogant playboy, Neville adds on to his contract of payment, a clause stating that he may visit Mrs. Herbert and she must adhere to his pleasures. Due to Mr. Herbert’s absence, Neville’s paintings and relations unfold in his favor.

Soon, however, things take a turn, as Mrs. Herbert gets uncomfortable in the agreement, her daughter, Mrs. Tallman, blackmails Neville into a similar contract and mysterious changes in the artists draughts of the landscapes point to the murder of Mr. Herbert, who is soon found dead in the mote.

Although the viewer is left with more questions than answers and the solution to the murder is somewhat ambiguous, it is throughout a captivating and highly mysterious drama with fascinating societal undertones. FIlled with flawless cinematography and a minimalist-Baroque hybrid score by Michael Nyman, The Draughtsman’s Contract is not only one of Greenaway most approachable films, but also his most compelling.