The Movie: The first installment of this sprawling crime trilogy, written by Mario Puzo and Francis Ford Coppola, has one of the finest screenplays in American cinema. The trilogy follows the Corleones, one of the five organized crime families of New York Metro area. The films comment violence, family, and patriarchy in America, the land of opportunity. Part one depicts the reign of Vito Corleone (Marlon Brando) as the family’s patriarch, or The Don, as he is referred to.

The Scene: On a glorious day, Vito is watering the tomatoes in his garden with his young grandson, Anthony. Vito calls his grandson over to show him a joke. He puts an orange slice in his mouth like a set of teeth and growls at Anthony, who cowers in fear, but Vito picks the toddler up and soothes him.

Why It’s Well Written: The film depicts Vito as the head of his own family as much as it depicts him as the head of the crime family. This scene depicts him only as the former, and accentuates the themes of family that the film explores. He is not the mob boss who associates with violence and crime. He is just a grandfather playing with his grandson. The writers chose that depiction for his death scene because a Don is a patriarch of his own family before he is a patriarch of his crime family.

The darkness of death is juxtaposed with the light-hearted nature of the scene, just as the dark side of Vito’s character is juxtaposed with the innocence of his grandson. His grandson’s perception of Vito in this scene is a representation of the duality of his being. Anthony is frightened by the monster Vito plays, then comforted and nurtured by Vito the father figure soon after. This makes the death more impactful. It sneaks up on the audience while the crime lord plays with his grandson.

It is also important to note the location of the scene. The tomatoes are not just a device that accentuates the Corleone’s Italian heritage; they are a symbol of the life growing around Vito during his death. His family grows and thrives even in the wake of his death, just as the tomatoes do in this scene.

The writers give Vito a just death. He is not a bloodthirsty mob boss who gets a thrill out of the violence associated with his profession. He states that he would like to transition his family from organized crime to a legitimate business. He has a vehement stance against drug dealing.

Vito even makes a peace offering after a rival family slaughters his son, Sonny (James Caan). His peers refer to him as “a man of his word” and “a modest man who will always listen to reason.” It is deserved for this respected and wise man to die happy in his own garden, with the company of his grandson, as opposed to the more brutal fates that mob bosses are expected to meet.

The Movie: Michael Blake’s screenplay, based on his novel, follows the story of John Dunbar (Kevin Costner), a Union officer during the Civil War ordered to establish a post on the Western Frontier. He chooses a dilapidated soldier fort on the plains of South Dakota and lives there alone, waiting for reinforcements to arrive. Months pass, and no troops arrive. During his solitude John meets his neighbors on the plains, the Sioux Tribe.

After an altercation, where the Sioux steal one of John’s horses, the tribe decides to befriend John, with the intention of learning when more White men will come to their country. John is intent on befriending the Sioux himself but there is a language barrier that he can’t overcome.

However, a white woman, named Stands With a Fist (Mary McDonell), lives with the tribe. The Sioux rescued her when she was a girl, and she hasn’t spoken English in decades. But she remembers English well enough to be the translator between John and the Sioux.

Seasons pass and John grows closer with the Sioux. Reinforcements still haven’t arrived at his post. The tribe gives him his own Sioux name, Dances With Wolves. It derives from a time when the Sioux saw John running with Two Socks, the wolf John befriended in his solitude.

His bond with Stands with a Fist tightens as well. During a long stay with the Sioux John learns of the story of how she earned her Sioux name. She punched a woman in the tribe, for calling her a name, and stood over her shaking her fist asking if “any other women wanted to call her bad names.” This endears John.

The Scene: The next time the audience sees John he is returning to his soldier fort. Inside the fort he lies down and reads his journal. We see him reading a page with a drawing of Stands With a Fist on it. He turns to the next blank page and writes, “I love stands with a fists. -Dances with Wolves.” While he smiles at his new declaration of love, he hears something outside. It’s Two Socks.

John walks outside and holds out a slab of jerky for Two Socks to eat. The wolf is tentative to grab it. Earlier in the film John states that he has grown close with Two Socks, but he wont eat from John’s hand. Leaning in closer, Two Socks snatches the jerky with his teeth and darts in the other direction. John is left with the satisfaction of reaching a milestone in his relationship with the wolf.

Why It’s Well Written: This scene marks a significant change in John’s character. It is the moment in which he becomes more assimilated with Sioux culture than American culture.

The screenwriter uses a journal entry to accentuate the moment. His journal is the document of his experience on the frontier. The journal is the source of his voice over narration throughout. This is the only time the audience can read a passage from his journal on the screen. The rarity of that occurrence delivers John’s declaration of love with an impact that dialogue could not have.

It is also important to note that he signs the sentence with his Sioux name. For the first time, he refers to himself with the identity he acquired from his relationship with the Sioux. He would never have felt that connection with them if he hadn’t fallen in love with Stands with a Fist.

His interaction with Two Socks also signifies John’s transition into Sioux culture. His connection with the wolf parallels a connection with land, an integral aspect of each Native American culture. This crucial plot point unfolds only with image of his journal entry followed by the sequence of Two Socks eating from his hand. 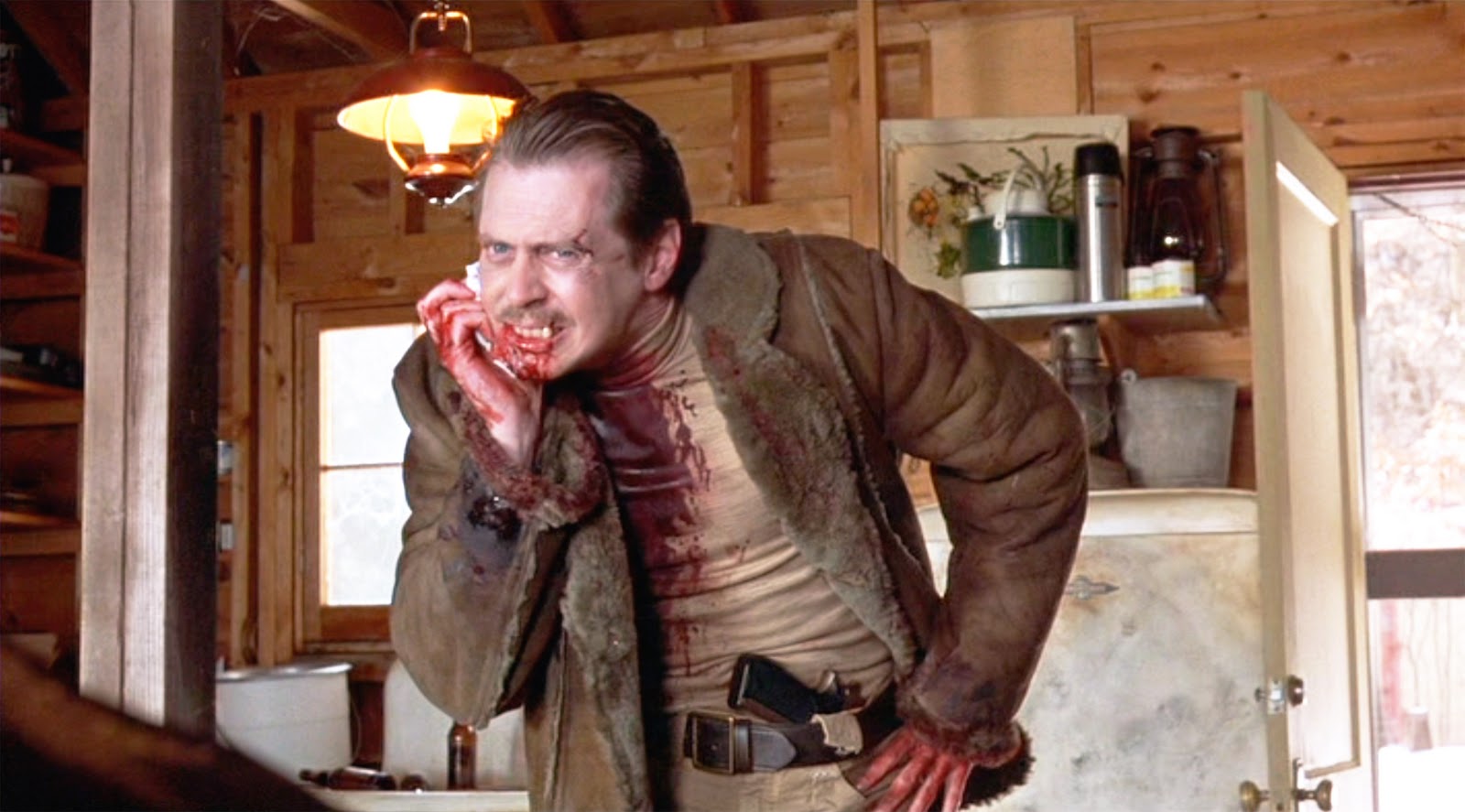 A bullet from the father-in-law’s gun grazes Carl’s cheek when the ransom is transferred. Carl shoots him dead before running off with the money.

The Scene: The morning after he collects the ransom, Carl’s car is pulled off on the side of a rural road that cuts through a snowy Minnesota plain. He sits in his car, staring at the stacks of hundred dollar bills in the briefcase, with blood pouring from the gaping wound on his cheek. He tosses a few stacks into the backseat, his partner’s share, and leaves the majority of the ransom in the briefcase.

He climbs out of the car and into the frozen winter, the brief case in his hand. He stumbles through the deep toward a barbed wire fence. Once he reaches the fence he drops to his knees, and digs into the hard snow with his red ice scraper. The red ice scraper and the red blood dried onto his hands are the only spots of bright color in the frame.

He buries the briefcase in the snow, then looks up and realizes the fence post he used to mark his briefcase is one of the hundreds and hundreds that stretch across the white plain. With no other way to distinguish his spot, he sticks the ice scraper in the snow. It stands over his share of the ransom like a grave. He presses a handful of snow up to his bullet wound and stumbles back to his car.

Why It’s Well Written: The Coen Brothers use this well paced scene to establish one of the film’s major themes: money creates a greed that brings people to do terrible things. The extant of Carl’s greed plastered on his face with the gunshot wound from the man he murdered to steal some money. The greed also drives him to steal a large portion of the money brings that theme to light.

The scene is written to create the gorgeous natural imagery that the Coens often portray. The blank, white void of the frozen Minnesota plains is a device used throughout the film. The film’s opening image is a car appearing onto a white screen, revealing that the white screen faded into snowstorm sometime during the opening credits.

It is a representation of the postmodern void that the film depicts. Frozen Minnesota is where the greed for money destroys a nuclear family. The cutthroat nature of American capitalism destroys the once certain truth of the strength of an American family in the barren, white winter.

The snowy plains also expose the gruesomeness of Carl’s character in this scene. The blood from his violent interaction pops against the white backdrop, particularly when his blood-caked hands are digging through the snow. The red blood set against the white snow creates imagery that calls the film’s violence to attention, while establishing character and theme, and advancing plot.

Author Bio: Logan is a writer from western Connecticut. He’s on a quest to use movies to unveil truths about the human condition. When his quest is on hold he can be found writing his novel or dancing at a Phish concert.