Probably the most (in)famous entry on the list, Richard Kelly’s severely underrated sophomore feature doesn’t take itself too seriously and yet, it is deadly serious in its delicious preposterousness.

Based on the screenplay that gives the impression of being written by the heavily stoned author, “Southland Tales” is a beautiful, unadulterated mess; a post-orgasmic dream of an aspiring lunatic; a smorgasbord of disparate ideas, bizarre cameos, techno babble, Lynchian homages, edgy social satire, pop-cultural references and mockery of biblical proportions.

An iconoclastic gospel according to an Iraq war veteran, Pilot Abilene (Justin Timberlake, sporting a cool facial scar), it is a decadent, demented, delusional masterpiece of chaos we embrace as order.

“Southland Tales” is the ultimate pre-apocalyptic movie to watch when…
… they tell you it’s white and you see black pierced with pink holes.
… Michael Bay persists in ruining your favorite childhood memories.
… yet another superhero comic is about to be adapted for the silver screen.
… you live in a country run by fascists and their idiotic, morally and ethically rancid suck-up servants.
… you decide to commit suicide and give up in the last moment, because “pimps don’t commit suicide”. 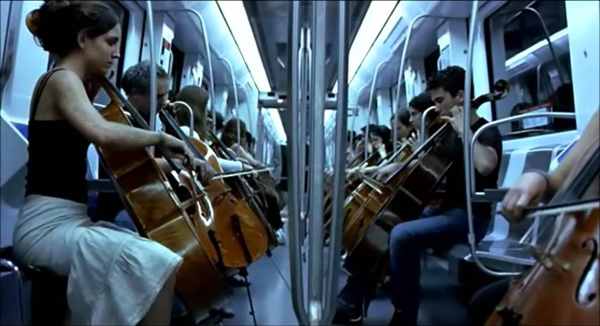 Pere Portabella’s subtly surreal last fiction feature is literally what the title says. However, the Catalonian director shows that both silence and Bach’s music have many beautiful faces, some of the present and some of the past. Whether he films a blind piano tuner at work, a tourist boat on Danube or a woman taking a shower, he does it tastefully, with wit, utter precision and keen sense of beauty.

His blend of faux documentary and an arthouse concert movie of sorts is split into several loosely connected chapters which depict the episodes from the composer’s life, talented truck drivers on a mission and cellists performing on the metro train, inter alia. Johann Sebastian Bach is portrayed by the German conductor, pianist, organist and harpsichordist Christian Brembeck whose skills are, in a word, impressive.

Firstly, we hear “Aria With Diverse Variations” of “Goldberg Variations (BWV 988)” played on a pianola roaming through an empty (museum?) space and lastly, our ears are treated to the sublime “Fecit Potentiam” from “Magnificat (BWV 243)”. In between, Portabella constantly keeps you guessing, so you never know what will come up next – a harmonica virtuoso in a lorry decorated by the religious imagery or Mendelssohn’s servant who tries to save the manuscript for “St. Matthew Passion” from the butcher. 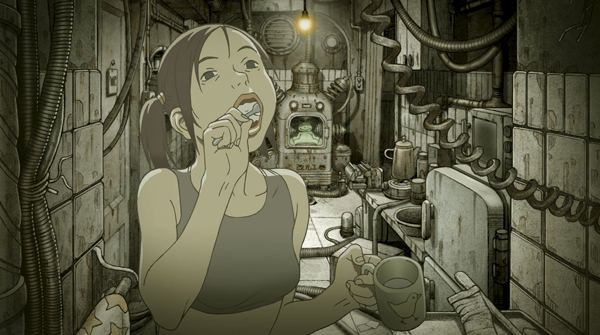 A year after the first party, Studio 4°C organizes yet another one, with “beyond” as a warning sign that reads: “Caution! Unconstrained creators ahead! You’re entering at your own risk!” Guided by whim and fancy, five anime-makers dare to cross the borders set by their predecessors and not a single of their “brainchildren” is weak.

The omnibus opens with “Gala” by Masahiro Maeda – a key animator for some Ghibli works and Tarantino’s “Kill Bill Vol. 1” and a director of mind-blowing TV series “Gankutusō: The Count of Monte Cristo”. Despite its sugary taste and simple aesthetics, his enchanting Fantasia-like vignette pulls you in a forest world inhabited by creatures who are probably inspired by Japanese myths and it doesn’t let go before a giant, egg-shaped object is soothed by music.

The sophistication of “Gala” is replaced by the “crudeness” of “Moondrive” signed by Kazuto Nakazawa whose resume contains a long list of various anime, a gothic short “Comedy (Kigeki)” being one of his most refined efforts. Sporting sketchy designs, aggressive textures, dirty humor and twisted characters, this segment could be described as the youngling of “Dead Leaves” and “Kemonozume” baptized by Takashi Miike and Chan-wook Park.

Next comes “Tojin Kit” by the first time director Tatsuyaki Tanaka who decides to slow down a bit, delivering a claustrophobic cyberpunk/steampunk noir set in a futuristic dystopia. The story of a gal who raises alien creatures and smuggles them in stuffed toys is presented with unique semi-realistic artwork of grayish, brownish and olive green tones, with some unexpected “light fantasy” intrusions.

For “Wanwa the Puppy”, the key animator Shinya Ohira applies the child-like doodles style, turning a family idyll of a maternity hospital room into a bizarre dream/nightmare reminiscent of Picasso paintings gone insane. When it ends, you’re not quite sure what you’ve just witnessed.

Lastly, the veteran Kōji Morimoto merges fantasy, science fiction and mystery in his “Dimension Bomb” which is impossible to deactivate. However, its explosion is not devastating, but inspiring – the scenes of abstract, hallucinogenic quality are woven together into a magic circle. A feast for eyes and brain. 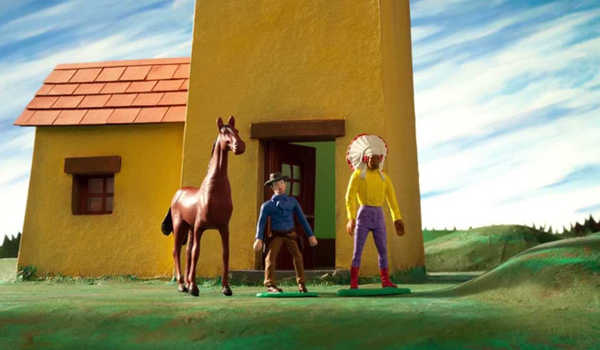 Cowboy and Indian – both callow, pointy-headed and mischievous – live in a hilly village, together with their foster parent Horse. Their first neighbors are a grumpy farmer and his kind wife whose pigs, cows and donkey attend the music school run by a lovely mare, Madame Longrée. On Horse’s birthday, Indian and Cowboy decide to build a barbecue as a gift, but they order 500 million bricks instead of only 500…

From that point on, “A Town Called Panic (Panique au village)” offers a series of crazy concepts turned into the leading trio’s absurd, supernatural adventure which takes them to a cave, Arctic, Earth’s core, underworld and back to their home.

Goofy, jovial, colorful and irreverent, this fantastic stop-motion comedy doesn’t spare the viewer any twisted little thing the characters are capable of doing or any mind-defying situation in which they find themselves. The fact that all of them are plastic toys which move as if some little boys played with them adds to widening a smile on your face. 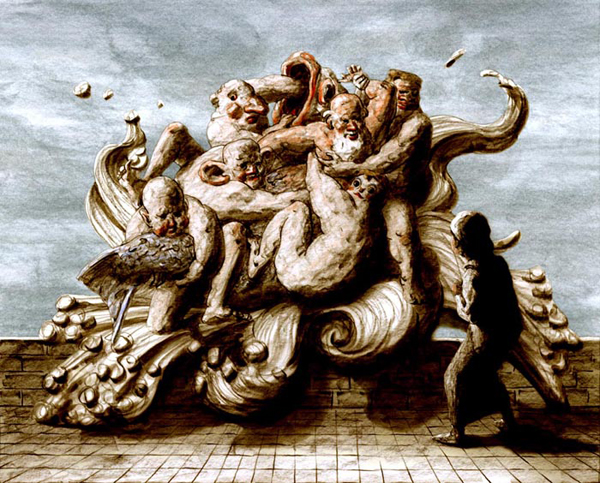 A professor at the Musashino Art University and the author of a (subversive) music video for Dir en Grey’s single “Agitated Scream of Maggots”, Keita Kurosaka is one of the most original indie animators out there. And a horror phantasy “Midori-ko” – thirteen years in the making (of 30,000 drawings) – is his longest film to date.

The bizarre, non-linear tale about a young idealist girl who lives in post-apocalyptic Tokyo, trying to develop a “dream food” that will put a stop to the famine, is perfectly matched to Kurosaka’s gritty, grotesque style. As he explores the pros and cons of the humanity’s existence, he plunges the viewer into the irrational world of GMO from the nutritionists’ worst nightmares.

Successfully avoiding to impose his own views (regarding nourishment) on us, he reminds us that meat comes from slaughtered animals and that root vegetables grow in mud mixed with fertilizers and animal feces. His sepia-toned artwork of freaky and to a certain extent, creepy hybrid characters are frequently draped in deep shadows of “eat or be eaten” setting.

Grainy chiaroscuro compositions seamlessly blend many influences of classic and modern art, but never seem derivative. Channeling the spirits of Hieronymus Bosch, Francisco Goya and Honoré Daumier, they could also be inspired by the likes of Dumała, Švankmajer, Plympton, Lynch and Cronenberg.

Complemented by the avant-garde cellist Hiromichi Sakamoto’s dissonant score, grim visuals establish the atmosphere of uncertainty with rare moments of comic relief, such as a wryly humorous homage to the statue of “Laocoön and His Sons”. 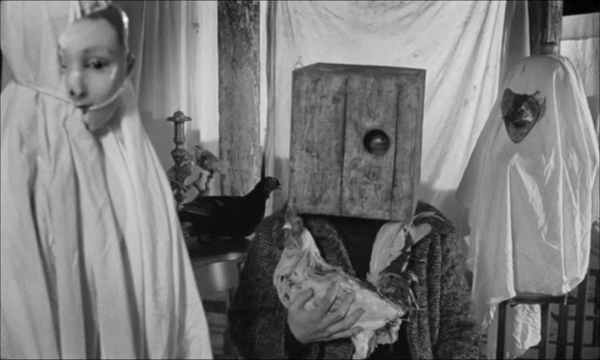 “My name is Walerian Borowczyk. I am a dead Polish filmmaker. I lived my whole life in a box with a hole.”

This postmortem statement operates as an introduction to a phantasmagorical biopic about one of the greatest provocateurs amongst the 20th century movie directors. Through 26 chapters whose titles begin with the letters of French alphabet, Bertrand Mandico spins an unusual story of Boro’s birth, childhood, youth, emigration to Paris and cinematographic death.

Knowingly “borrowing” from Švankmajer, Tarkovsky, Cronenberg, Russell and Lynch, the little known French cineaste attempts to determine the origin of his subject’s subversiveness and answer why he is remembered as both genius and pornographer. Out of facts and fabrications implemented into bizarre, perverse, irrational, melancholic and/or darkly comical imagery, he creates a stunning surreal drama.

According to Mandico, the evolution of a Polish titan (as some critics call him) feels like a sticky ethereal dream of wonderful B&W frames accompanied by the moody score and mellifluous voice of Elina Löwensohn in a double role of Borowczyk as narrator and his mother.

A forty-minute-long refreshment for the seasoned arthouse aficionados, “Boro in the Box” might spellbind even those who aren’t familiar with (complete) Borowczyk’s oeuvre. 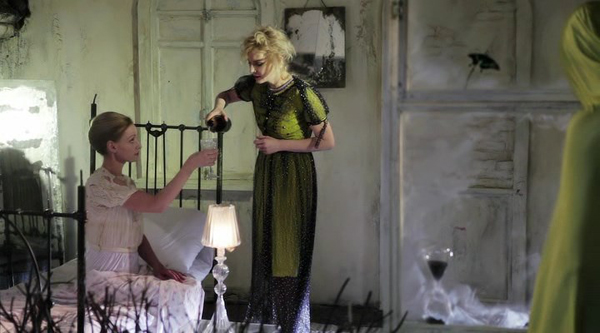 It focuses on the last days of a terminally ill woman, Margarita ‘Rita’ Gautier (Olga Kuzina), who’s admitted to a run-down hospital where both doctors and patients smoke like chimneys in spite of the smoking ban. The task of taking her to the afterlife is accepted by Tanya Neubivko (portrayed by Litvinova herself) – the eccentric Angel of Death turned forensic assistant who likes her “protégé” and wants her to depart as peacefully as possible.

Over a cup of tea and wearing an elegant attire, Tanya reports about her time spent on Earth to her secretary (who’s also a pretty, well-dressed lady), in a decrepit room furnished with antique pieces, a broken mirror and hand-shaped candleholders. Back in our world, she carries around an ancient (and unplugged) radio that broadcasts info on dimensional portals.

As you might have already guessed, “Rita’s Last Fairy Tale” is quite a whimsical piece of cinema sprinkled with quirky humor and brimming with details (let’s not forget to mention our zany Grim Ripper’s ferret pet). Outré, playful, life-affirming, somewhat beguiling and a bit awkwardly paced, it is not the best example of delicate direction and screenwriting, but it does introduce interesting characters with amusing mannerisms.