The piece concerns itself with not only the final ten days of Adolf Hitler’s harrowing reign over Nazi occupied Germany, but subsequently his own life as he witnesses the eventual collapse of his empire. “Downfall”, also known under its original German name of “Der Untergang” is without a doubt one of the most applauded World War 2 based films of all time, a powerhouse biopic that makes adequate room to be both thoughtful and provocative in nature.

The predominant success of the brutal and bleak drama is unquestionably Bruno Ganz’ mesmerising and commanding performance as the tyrannical leader of the Nazi party. His portrayal is perfectly executed with considerable depth and complexity, flawlessly capturing the Fuhrer’s raw emotion, fading passion and eventual descent as the inevitable end of his reign draws closer and closer towards the close of the war.

The Switzerland born actor Bruno Ganz, who originally declined the role, only later accepted driven to add a compelling depth to Hitler under the influence of Albin Skoda’s portrayal of the leader in the 1955 production “The Last Ten Days”. He went on to prepare for the role by studying Parkinson’s disease patients in a Swiss hospital, whilst perfecting the Third Reich leader’s peculiar Austrian accent with the aid of one sole recording, and assistance by residents of the leader’s hometown of Braunau am Inn.

Memorable Quote: “The war is lost, but if you think that I’ll leave Berlin for that, you are sadly mistaken. I’d prefer to put a bullet in my head.”

Often using the real life Eklund as an advisor on set, it apparently made for eventful filmmaking due to the unhinged man’s uncontrollable manner and irrational thinking, especially when he didn’t entirely agree with creative control that had been taken by the production team.

Memorable Quote: “This is yours, this is fuckin’ yours!”

At this point, the French actress Marion Cotillard was fairly unknown, which shocked audiences when she beat off several established actresses to be given the role as the tragic singer Edith Piaf following a commanding screen test, a casting choice which was more than vindicated when it landed the Parisian beauty a best actress Oscar in 2008.

“La Vie en Rose” following the cabaret singer, as she grows up on the street, having been abandoned by an absent father and alcoholic mother, leading her to use her incredible vocal range to work her way up the ranks and gain her eventual international success, becoming one of France’s most adored musical talents.

A heartrending production of the tragic figure whose eventual substance abuse took its toll on her body, she prematurely died at 47, Collitard’s mesmerising representation of the highs and lows of her rollercoaster life is incredible, clearly connecting with the vocalist on a suitably heightened level whilst also committing to Piaf’s peculiar appearance, shaving her hairline back, as well as removing her eyebrows, prior to pencilling them on later. 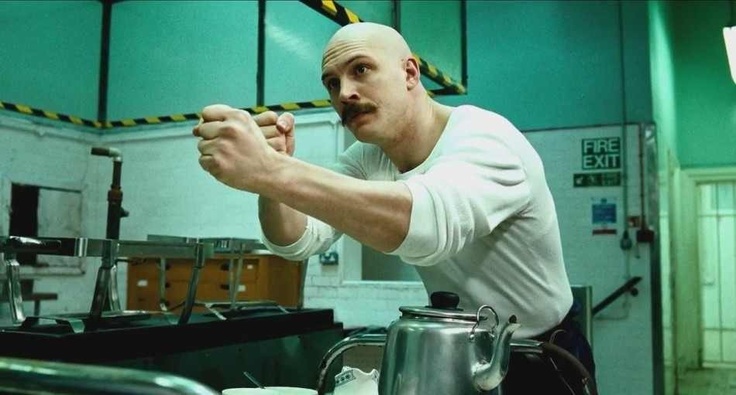 The notorious Charles Bronson, real name is Michael Peterson, is a bizarre man with a huge, powerful frame and personality to match, serving life in prison due to his terrifyingly violent nature, despite never actually killing anyone.

A fascinating entity, away from his darker, bloodier passions in life, he is a highly artistic and cultural being, spending his days writing a number of books whilst also creating flawless artwork and illustrations during his time in prison, all of which can be found at several exhibitions, in turn, winning him a number of exclusive art awards.

Packing on an impressive 42lbs in pure muscle and doing 2500 press ups a day to undertake the role of the strapping convict Charles Bronson, Tom Hardy’s assuring commitment to bulking up for a film role has never been in question. Time and time again the actor has proved himself to be an actor who willingly puts himself through gruelling training programmes to attain the right figure and posture on frequent occasions.

Meeting with the untameable criminal on multiple occasions ahead of filming Nicholas Winding Refn’s 2008 electric homage, Tom Hardy impressed Bronson with his ability to mimic the convict’s towering build, body language and unique mannerisms. By the end, the pair had built up quite a relationship, as Bronson championed Hardy’s interpretation when he was finally allowed to view the piece, calling it theatrical, creative and brilliant.

Memorable Quote: “Now hang on to your fillings, alright? ‘Cause it’s going to get fucking leary.”

A modern day pioneer of method acting, Daniel Day-Lewis has in recent years become a leading figure in acting, critically acclaimed due to his outstanding consistency in perfecting each and every role he undertakes whilst collecting a mountain of accolades and awards along the way. It is without a doubt that DDL’s’ flawless acting abilities will be remembered as one of the finest of his generation.

Whilst his magnum opus of the 21st Century is unquestionably his compelling performance as the oil baron Daniel Plainview in 2007’s “There Will Be Blood”, a close second would be his undertaking of the titular president in Steven Spielberg’s immersive political drama “Lincoln”. In which, Day-Lewis portrays Abraham Lincoln during a critical period in his ground-breaking presidency, as he audaciously attempts to abolish slavery amidst the backdrop of the on-going Civil War, an act which would tragically prove be his last in the White House.

The film’s politically driven concept of a President urging for moral advancement and significant change in American history is beautifully captured by Spielberg working with Tony Kushner’s adapted screenplay, and at the heart of the piece is Day-Lewis’ lead, enriching Abe Lincoln’s persona and character with captivating depth and wisdom. It’s the actor’s grandiose and memorable performance that truly carries 2012’s “Lincoln”.

Memorable Quote: “I am president of the United States of America, clothed in immense power! You will procure me those votes!”

Adrien Brody’s faultless turn as the real life composer and musician Wladyslaw Szpilman in Roman Polanski’s thought-provoking holocaust drama “The Pianist” is a dramatically brooding take that relies heavily on his glum body language and raw emotion told through sullen eyes as opposed to typical weighty gestures and speeches that are so often found in this type of biopic.

The result is a devastating representation of one of history’s darkest time periods, a morose character who perfectly sums up the traumatic events that were plaguing Europe. Polanski, whos family were holocaust survivors during the Second World War, faithfully adapted the stirring piece from Szpilman’s own memoirs, and actively sought after Brody after meeting on the set of “The Affair of the Necklace”.

Collecting an Academy Award at the young age of 29 for his disturbing yet awe-inspiring portrayal as the Jewish survivor, Adrien Brody achieved his skeletal, fraught frame of holocaust victim by dropping 31lbs on a minimalistic diet, whilst also learning how to play the piano, to better understand the role of Szpilman.

Becoming the only American actor to win a Cesar award, “The Pianist” was a fundamental performance in the career of the diverse and talented actor that has since helped him to attain a number of significant roles into his 30’s.

Memorable Quote: “If I’m going to die, I prefer to die in my own home. I’m staying put.”

A beautifully riveting study of human rights, equality, and fighting for what you believe in, which subsequently ends in tragedy, depicting the horrific homophobic views of past generations and how hard certain individuals worked to overcome such prejudices. Sean Penn has never been more convincing in a role than he is in “Milk”, a kind and caring man who triumphantly fights for what he believes is right.

Filling the loveable character of the unsung hero Harvey Milk with heart, humour, complexity and depth, an upbeat, optimistic soul that laughs and smiles his way to political and social accomplishment, characteristics you so rarely see out of Penn who generally opts for much more cynical, nihilistic roles.

Memorable Quote: “All men are created equal. No matter how hard you try you can never erase those words.”

Entirely unrecognisable for her outstanding and challenging portrayal of the formidable serial killer, Aileen Wuonous, Charlize Theron dramatically underwent one of the most impressive yet shocking image alterations of cinematic history.

Yet despite the remarkable physical transformation she attained, it was however the subtler details of expression and body language that she truly perfected, in turn, crafting a magnetising performance layered with tenderness, guilt and painful desperation, in turn, leading to an overwhelming critical response, and rightfully awarding her with over fifteen best actress achievements.

Director and Screenwriter Patty Jenkins’ “Monster”, is based on Aileen Wuonous, a former prostitute turned murderer on death row who killed and robbed several men to fund the lifestyle of her and her unaware girlfriend, Selby, a fictionalised version of Wuonous’ real life partner Tyria Moore, here portrayed by Christina Ricci.

Theron’s phenomenal depiction of the serial killer is so fundamentally captivating thanks to her audacious tightrope walking between being a morally absent, brutal and loathsome killer, whilst continuously appearing to be compassionate, sympathetic and ridden with guilt.

It’s difficult to not feel some degree of sympathy for her character despite her lurid attitude and abysmal crimes, an unwavering, no holds barred portrayal that manages to suitably contrast audience opinions, adding human elements to someone so evil, which is no easy feat for an actor to so faultlessly pull off.

Memorable Quote: “I always wanted to be in the movies.”