A beloved classic, Rob Reiner’s comic fantasy romance, based on the novel by William Goldman, has become one of the most popular and enduring fantasy films of all time. The story of The Princess Bride is told by a grandfather, played by Peter Falk, to his grandson, played by Fred Savage.

It features a princess named Buttercup who is to be married to the vile Prince Humperdinck when she actually loves her lost love Westley. Westley, hearing of the news, must rescue her from the Prince, with the help of a swordsman and a giant, so that they can live happily ever after.

As much a comedy as an adventure film, The Princess Bride owes much of its success to the great performances by its actors. The leading couple is played by Robin Wright and Cary Elwes, but the true magic is in the impressive supporting cast which includes Andre the Giant, Mandy Patinkin, Wallace Shawn Christopher Guest and Billy Crystal. Endlessly quotable and filled with many rousing action sequences, The Princess Bride is one the most fun and well balanced adventure films of all time. 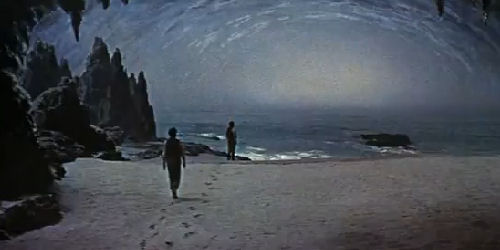 Based on the monumental novel of the same name by author Jules Verne, this science fiction blockbuster exemplifies all of the qualities of 1950s adventure films. James Mason stars as Sir Oliver Lindenbrook, a renowned professor of geology who discovers a clue to a secret passage into the center of the Earth.

Lindenbrook, accompanied by his student Alec, played by Pat Boone, ventures out to Iceland, where the passage is. Unfortunately for them, word has spread and they run into a rival professor as well as a descendant of the original discoverer who want to get there first.

Parts of this film have not aged the greatest, such as the costuming for the tribes in the center of the Earth or some of the more campy effects. The side plots can also be a bit melodramatic which may seem odd to those not familiar with the style of big productions at the time.

Still, the incredible effort put into the detail of the sets and the expansive size of the production make for great fun and excitement. Plenty of the subterranean scenery is indeed awe inspiring, even when compared to the more technically advanced adventure films of today.

One of silent film master Charlie Chaplin’s most enduring successes, The Gold Rush follows “The Tramp” character’s exploits in the blizzardous tundra of the Klondike Gold Rush. Like all of Chaplin’s movies, the film is first and foremost a comedy, but it also features many slapstick events of adventure and peril. Some of the crazy events that The Tramp gets into this time include battling crazed prospectors, brutal storms and roaming bears.

Universally acclaimed and cited by the director as one of his favorite films, The Gold Rush is timelessly funny, with many infamous gags such as when Charlie Chaplin eats a shoe when he runs out of food. It is not on the same level of thrills or intensity as many of the other films on this list, but it does match them in the rousing sense of adventure.

Chaplin successfully conveyed the dangers and risks undergone by the American pioneers and entrepreneurs, which appealed to most of Hollywood and still helps build on the mythos of the American frontier.

While some adventure stories succeed by being relatable to the everyday man, others focus instead on conveying a profound sense of wonder and excitement about the unknown. Stanley Kubrick’s science fiction epic starts million of years ago, before humans were around, when a mysterious monolith appears to a group of primates and drives them to aggression. In the future, the monolith appears again, on the moon, and its secrets are still hidden.

Dave Bowman is an astronaut on a flight to Jupiter, riding in a spaceship controlled by an intelligent computer named HAL 9000. As their cosmic journey continues, more and more unusual conflicts arise as the power of the monolith affects both the people and the computer systems on the ship.

2001 was a very polarizing film at its debut, due to the ambiguous symbols and somewhat confusing story, but over time it has become recognized as one of the greatest science fiction films of all time. Although the movie is paced considerably slower than most action movies, the scope and presentation of it’s awe inspiring journey more than make up for this.

Another terrific adventure series by Spielberg, this film’s combination of wonder, action and suspense took the world by storm and became one of the most popular films of the 1990s. The film follows paleontologist Dr. Alan Grant, played by Sam Neil, who is invited to review and approve a new theme park.

The park, called “Jurassic Park,” is inhabited by cloned dinosaurs, created by biologist John Hammond, played by Sir Richard Attenborough, and is under scrutiny after the death of a worker. Grant is skeptical of the park before arriving, and his fears soon prove justified after an act of sabotage releases the dangerous dinosaurs on the island to roam free.

Grant is joined in his review by a fellow paleontologist, played by Laura Dern, a mathematician, played by Jeff Goldblum, and Hammond’s two young grandchildren. They all have to work together to survive while evading T-rexes and getting the security systems back online.

When Jurassic Park came out it displayed some of the greatest achievements in special effects up to that point, in both animatronics as well as CGI. This seemingly realistic display of dinosaurs was so successful that the film spawned three sequels, all of which were box office hits. 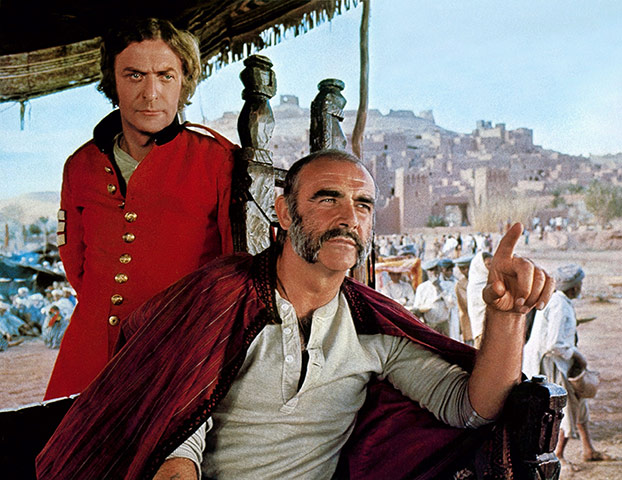 Legendary director John Huston helms this film based on a short story of the same title by Rudyard Kipling. The film stars Michael Caine and Sean Connery as two British officers from the Indian Army who, not wanting to return to their dreary lives in England, set out on an adventure into Kafiristan (Afghanistan) to steal treasures from primitive tribes.

They find a tribe who treat them as gods, but tensions rise between the two as greed, women and power intervene.The film’s exotic scenery and relatable themes make it both exceedingly entertaining as well as dramatically powerful.

Caine and Connery, real life friends, give brilliantly fun and entertaining performances which make their eventual breakdown all the more powerful. Christopher Plum also plays a smaller role as Rudyard Kipling himself, who hears of the tale firsthand. The Man Who Would Be King, nominated for four Academy Awards, was seen as somewhat of a return to form for Huston, who appears on this several times, due to his brilliance in combining the adventurous spirit with solid thematic content.

King Kong is one of the most iconic and influential adventure film of all time. This pre-code picture follows the cast and crew of a new film by director Carl Denham as they travel to a remote site called “Skull Island” to shoot a jungle movie. When they arrive at the island, they find a group of natives who are about to sacrifice a young woman to a mysterious creature named “Kong.”

When the natives see the beautiful leading lady, played by Fay Wray, they offer to trade several of their women for her but the crew, of course, refuses. That night however, she is stolen and put out as a sacrifice for Kong, who turns out to be a gigantic ape. The crew then has to go and rescue her, facing the creature and many other gigantic beasts.

Remade twice and responsible for countless other films, King Kong has managed to remain in the public consciousness for almost one hundred years. Made during the height of the exploitation/jungle film craze of the 1930s, the movie used the standard format of the genre as a jumping off point, helping the monster movie craze as well as bringing credibility to adventure films.