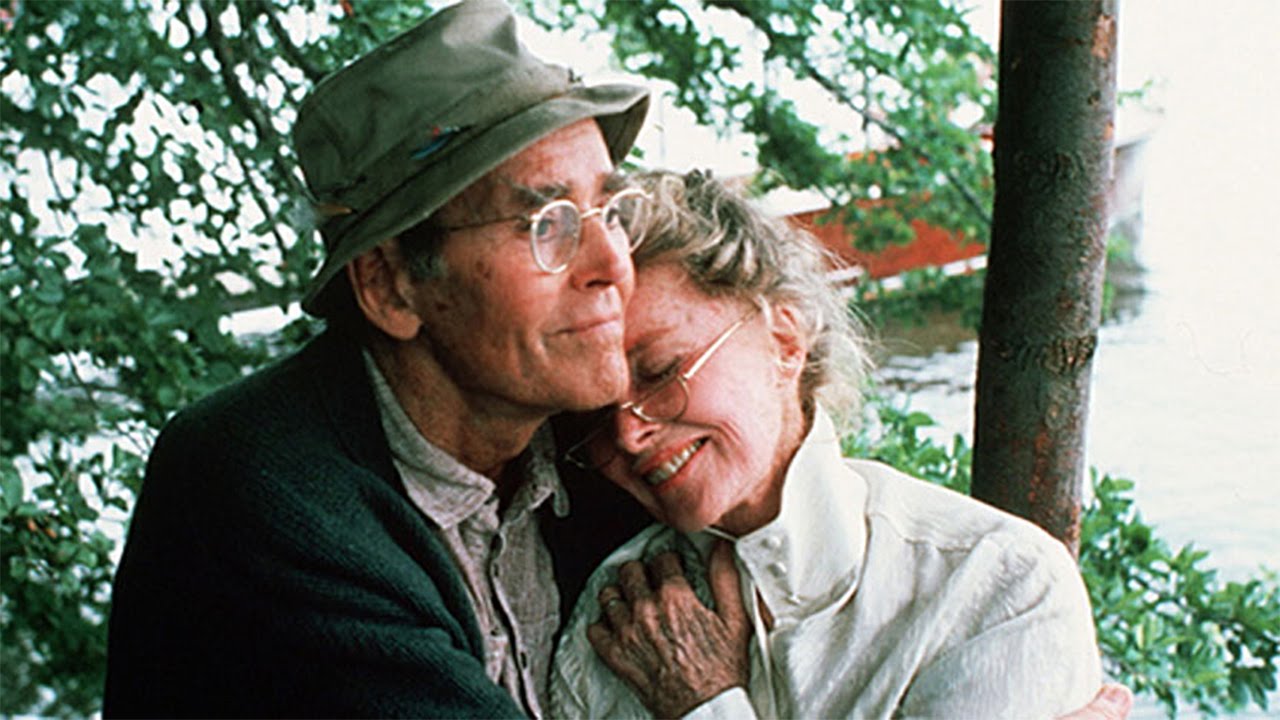 At the heart of it, On Golden Pond is a reaffirming, warm film. Despite its focus on Fonda’s Norman, Hepburn’s Ethel allows Norman to achieve an equilibrium of contented and provides us with a constant source of warm comfort.

Without Hepburn’s vivacity much of the film would be lost to Norman’s misanthropy. We would feel overwhelmed, and negatively inclined towards Norman. Instead, Hepburn is persistently injecting her loving energy into the action; reprimanding Norman for his misdeeds and doing her best to bring out his human side. As she progressively gnaws away at Norman’s hardened exterior, we begin to see the real Norman.

Throughout the film, Ethel is the only one who consistently sees the merit in Norman, and this is touching because it is clear that she has been exposed to the love that he can offer. As a result, Hepburn performs fantastically in conveying to us that Norman is a man worth our time and our attention.

Despite it not being her film, Hepburn’s performance is certainly a highlight of On Golden Pond. Her dive into the water to save Norman is joyous to watch, and her desperate clamouring when Norman’s heart malfunctions reminds us of the weight of human relationships and emotion.

Finch received Best Actor posthumously for his performance as Howard Beale, ahead of De Niro’s performance in Taxi Driver (1976). There is no doubting that Finch phones in an electric, memorable performance full of uncapped intensity.

In fitting with the satirical tone of the film, Finch’s Beale is hyperbolised. Smartly, Finch never lets Beale drift into caricature, but nonetheless invariably ensures that he is lively. It is clear that Beale is ‘mad’ and that he ‘isn’t going to take it anymore’.

Because the other characters, played by Faye Dunaway, William Holden and Robert Duvall, fit a different more subdued tone, Finch had to ensure that his insanity was interesting and hilarious enough. Otherwise, the film would’ve been a shadow of what it is. Every time Finch features in the frame, we as an audience are excited and anticipating what incoherent things he is going to yell.

Furthermore, Finch’s insanity as Beale helps to illuminate perhaps the most important point of the film; that the news media is bereft of a sense of responsibility. This absence of moral substance means that they are susceptible to only one goal, to make capital. Therefore, Beale’s unstable ramblings shows us the extent to which the news media is happy to profit off the detriment of others.

As a result, Lumet does not just ask us to laugh at Beale and the state of news media, but to also observe it under a harsh, critical lens.

Michael Haneke’s film is a masterpiece of realism, in its acting, cinematography and writing. As the narrative is solely anchored to Georges (Louis Trintignant) doing his best to look after his deteriorating wife Anne (Emmanuelle Riva). Even though the film confronts the most melancholic parts of ageing, it is ultimately a celebration of the journey of life.

Riva’s performance suggests to us that she knew inside out the essence of her character. At the beginning, Riva plays Anne as a woman happy with her lot in life, attached to her husband and satisfied with the past she has had.

Then, in the early stages of her illness, Riva maintains the glow of life, while also evocatively portraying Anne’s desire to meet her end before everything becomes too hard. Anne is fleshed out by Riva to show the conflicting nature of life and death, and we see her concerns as principally human.

After Anne suffers a second stroke, we know that Riva is going to have to put even more into the performance than she has already had to. Her transition into a barely functioning, vulnerable old woman is completely believable, as Riva adopts a rigid boy position, and her face has lost all the glow it once had. This envelops us into the sadness associated with such a decline. 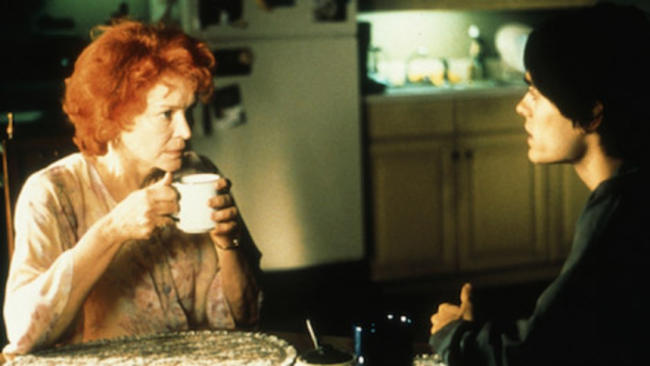 Requiem for a Dream is first and foremost an ensemble film, and without the layering of the different experiences and consequences of drug abuse, the film would suffer enormously. Nevertheless, Ellen Burstyn’s performance shines through amongst a bill of stellar performances given by Jennifer Connolly, Jared Leto and Marlon Wayans.

Burstyn works very hard for the first two acts of the film to establish Sara as a longing, dispirited old lonely woman. Most of the time we see Sara sitting watching television in the dark, finding reality through the constructed world of game show television. Burstyn has a wonderful ability in the film to show us that Sara genuinely revels in the joy of television, but meanwhile implicitly convey that in her old age Sara is withering away.

Sara’s use of is arguably the least damaging, as she ostensibly does so to maintain her health. Her son and his friends, meanwhile use drugs recklessly. Nonetheless, Sara’s addiction to these manifests just as strongly, and she suffers by way of psychological dysfunction.

While the others express their suffering from drug abuse through physical means, Burstyn represents her character’s struggle by showing her decline into sheer incapacity. She sinks into the demands of the role; which thereby makes us really believe that Sara has become lost to the world. Her fixed eyes and her unconditional grin presents a confronting image of Sara, but nonetheless urges us to lament her psychological degradation.

Ingmar Bergman’s masterpiece, Wild Strawberries, makes the exploration of ageing a main concern. Sjostrom is vested with the responsibility of drumming this into us, as he plays Isak Borg, a cynical professor.

Needless to say, Sjostrom gives an appropriately nuanced performance as Borg. At the beginning of the film, Borg is saddled with a distaste for life and a distaste for human contact. This is a common characteristic for ageing intellectuals, and Borg presents it better than ever. He gets across Borg’s strong convictions, but also imbues his very being with a safeguarding sarcasm.

We get the feeling through Sjostrom’s astutely sensitive performance that Borg wraps himself in a veil of superiority to shield himself from the harsh reality of loneliness and disappointment.

Through Bergman’s deliberate flashbacks, Sjostrom’s performance becomes even more complex and emotive, as we become intuitively aware of Borg’s tragic romantic past. Rather than bask in the sadness of it, Borg looks back on youth as an erratically pleasant part of life.

Prior to his role as Adolf Hitler in the highly successful Downfall, Bruno Ganz had not captured international attention. That was soon to change, though. Downfall does not attest to be a comprehensive account of WWll, let alone a comprehensive account of Hitler’s egregious existence. It merely shows the erosion of the Nazi cause in the mid ’40s, within which is contained Hitler’s own decline in sanity and control.

Rather than have to juggle too much, or even be confined to spouting dialogue to further the narrative, Ganz is given an optimal opportunity to portray Hitler as the man that he was.

Ganz is so immersed in this role, as he needed to be, that it is easily to forget that he is merely an actor portraying Hitler. His physical transformation into the character, marked by the infamous moustache, bent posture and failing hair, means that we get the sense that Hitler is genuinely in our midst.

Adopting the physical characteristics is one thing, but Ganz pays minute attention to Hitler’s mannerisms, embodying the way that he spoke and his habit of shaking his left hand behind his back.

Through Ganz’s very physical portrayal of Hitler, we are palpably struck by his gradual psychological decline. As WWll rages on, Hitler becomes more frantic and more illogical insofar as he loses his grip on simple realities.

As many would already presume that Hitler was crazy and pathological to begin with, it is no simple task for Ganz to further show Hitler’s degradation. His barking commands of remaining in Berlin, and launching offensives without adequate men are rejected by even the most dedicated Nazi adherents.

The many close-ups of Ganz’s incensed, paranoid facial expressions optimally conveys to us Hitler’s admittedly ‘human’ downfall. Ganz doesn’t play Hitler as some intangible monster, but as a human wrought with mental instability and insecurity.

While Anne’s character changes drastically throughout the film, Georges remains loving and devoted for the entirety of the film, even in his last sad moments.

Without Georges, the film would be bereft of love and therefore bereft of meaning. And Trintignant’s performance is responsible for this to so prominently emerge from the film. He is reliably great, both holding the film’s success and Anne on his own shoulders.

Trintignant’s use of his eyes to convey George’s unconditional care for Anne is certainly a highlight of his performance, as it optimally shows that George will never give up on his love for Anne. The power of his performance isn’t through his words, but though his facial expression and physical movements.

Georges is the character that carries as much burden as Anne in respect of the consequences of the illness. He takes unadulterated care of her, without an inch of regret or apprehension.

It is an ugly job that perfectly proves George’s life-long devotion to his wife. Even his final decision to suffocate Anne came from a place of love, as he suppressed his own desire to have his wife live on. Trintignant constantly shows Georges struggle with hearing Anne say that she wanted to die, but eventually gratifies her wish for her own benefit.

Alexander Payne’s magnum opus, unusually centres around an aging father who travels cross-country to pick up his share of a ‘lottery’.

In and of itself this plot is quaintly novel. It is rare for us filmgoers to get such a rich and amusing exploration of an aging father and his relationship with his son. With such great material, Bruce Dern makes a great comeback to cinematic prominence.

Dern’s Woody almost plays to a stereotypical image of a despondent father. He is a man worn by the effects of alcoholism, and his temperament accordingly obstinate and bitter. However, the stereotypical outline of the character is never seen during the film. Dern always ensures that Woody is abrasive and humanly absorbing as a character.

Despite his outwardly unattractive qualities, Woody never repulses us. Dern’s performance during Woody’s ugly spots still compels us to feel sorry for the way his life has panned out, and ensures that we always see him as a human first and foremost. Sometimes, Dern even makes us laugh at Woody’s ill-informed, selfish decisions.

Dern’s performance is immersive, saddening and amusing all at the same time. His character is complexly human, and every physical movement Dern engages in adds to developing his character.