Sam Mendes was an unlikely choice to helm Skyfall, especially after Marc Forster, another serious indie director, seemed to devolve at least half of Quantum of Solace to the second unit.

But Mendes, an outsider to both the franchise and the genre, excelled at the set pieces. Quantum of Solace often looks like it was shot too close to the action and then edited by a madman slashing at strips of celluloid with a straight razor. By contrast, Skyfall’s choreography is fluid and clear, shot and cut with energy but not amphetamines, and the concepts, like the Russian Dolls prologue or the home invasion finale, are witty and original.

The most inventive sequence has Bond (Daniel Craig) stalking mercenary Patrice (Ola Rapace) in Shanghai. They move through neon-drenched, colour-coded locations as Thomas Newman’s score pulses and evolves. The wordless story is told visually and spiked with details – Bond’s non-reaction to the murder of a security guard is a reminder that our hero is not overly concerned with collateral damage.

The sequence reinvents the cliffhanger when Bond follows Patrice into a high-rise and spontaneously hitches a ride on the undercarriage of his express elevator. In a nerve-jangling close-up, Bond remembers after about twenty storeys that his right arm is still recovering from shrapnel damage. But the elevator keeps climbing and Bond keeps hanging on.

Finally the action moves to a large unfurnished office floor, an empty glass labyrinth lit by the huge neon animations on the side of an adjacent building. Swirling light bounces off interior doors and windows – a visual tour de force by Roger Deakins, perhaps the world’s greatest living cinematographer.

When Bond tackles Patrice, the fight is captured in a sustained shot with the men framed in a broken window, two frantic silhouettes against neon. It ends with the first line of dialogue in nine minutes, and a literal skyfall.

When CIA agent/master of disguise Felix Leiter (David Hedison) chose James Bond as his Best Man, he should have guessed that the stag weekend might end with the impromptu mid-air apprehension of a notorious drugs baron by hooking his Cessna from a helicopter. But in a brutal twist the cocaine kingpin escapes, murders Mrs Leiter on her wedding night and dunks Mr Leiter in a shark tank. This movie is harsh.

Licence to Kill is an anomaly, with a grim tone and a pervasive sense of menace courtesy of the series’ scariest villain, Franz Sanchez (Robert Davi). Although influenced by Yojimbo, Scarface and Manuel Noriega, the main plot was pieced together from various Fleming leftovers and Timothy Dalton’s performance is straight from the original prose.

It’s one of the few films where Bond seems to be in danger. He quits his job, works his way into Sanchez’s inner circle and plays the villains off against each other until he’s invited to the huge meditation retreat which fronts for a cocaine factory. It’s a beautiful location (Centro Cultural Otomi in Mexico) and of course Bond blows most of it to bits after starting a lab fire – but the real climax comes with the ensuing truck chase.

Sanchez flees the compound in a car, followed by four 18-wheeler Kenworth tankers full of drug-laced gasoline, and a pickup truck’s worth of assorted henchmen.

In an excellent demonstration of his single-minded wrath, Bond dispatches the henchmen and hijacks and/or destroys the tankers one after another, getting closer and closer to Sanchez. Meanwhile Sanchez, who spends most of the film rich, powerful and surrounded by yes-men, ends up isolated, with his fortune destroyed and nothing but a machete to swing at Bond.

This is one of the most exciting finales of the series, both for its vehicular action – regular stunt driver Rémy Julienne tilted one of the Kenworths into a side-wheelie without assistance – and for the red-blooded grudge between Bond and Sanchez.

The sequence was supervised by Barbara Broccoli, then associate producer and now custodian of the franchise. This was a literal trial by fire – the stretch of road (La Rumorosa Mountain Pass) was said to be haunted, and while shooting the climactic explosion one of the cameras captured what looks like a demonic hand reaching out of the fireball. You can look it up on YouTube. 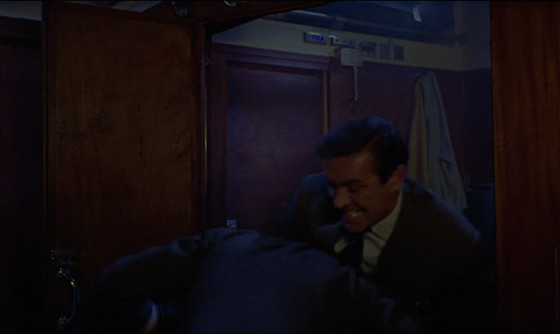 Goldfinger set the template for the more outlandish elements of the series – the gadget-packed supercar, the enormous sets, and names like Pussy Galore and Goldfinger which are, let’s be honest, quite unusual.

But the Bond films aren’t just about spectacle and mayhem. They have a decadent sense of class and irony, a hangover from the British Empire that the sixties’ spirit of Cool Britannia just can’t chase. (In Goldfinger, Bond scoffs at the Beatles.)

This side of Bond is pure Fleming, closer to film noir than to your average blockbuster. It’s a moral grey area which acknowledges our hero as a misogynistic, alcoholic killer with unwavering loyalty to the Crown and a disdainful understanding of haute cuisine. This is epitomised in From Russia with Love, particularly the Hitchcockian Orient Express scenes.

The film spends a long time moving its twin alpha males, Bond (Connery) and cold-blooded assassin Red Grant (Robert Shaw), into position. Grant poses as Bond’s local contact and wins his trust. They have dinner on the train and Bond is only mildly perturbed when Grant drugs his defecting girlfriend/honey trap Tanya (Daniela Bianchi) by spiking her drink.

But the front doesn’t last – Grant ends up holding Bond at gunpoint in his cabin, a stalemate enriched by a very British class tension. “Red wine with fish,” says Bond, “That should have told me something.”

The standoff erupts into a furious close-quarters brawl, notable at this point in film history for its length. Two minutes might not seem long compared to the epic alleyway rumble in They Live, but it’s more time than Humphrey Bogart ever spent slapping down Elisha Cook, Jr. Bond and Grant knock seven bells out of each other, and it proves to be such an even match that only their respective gadgets can settle the score.

Bond later fights henchmen on trains in Live and Let Die, The Spy Who Loved Me and SPECTRE, but he never had a better opponent than Red Grant – it is, as we say in Connery’s homeland, a square go.

How do you come back from Die Another Day? A formal apology would have been nice, but the Bond producers had a better idea. They adapted Fleming’s first novel, cast the intense Daniel Craig against type (and hype) and brought back Martin Campbell, the director who introduced Pierce Brosnan to the role a decade earlier in GoldenEye.

After a stark, monochrome prologue (a first for the series) Bond is found spying on bombmaker Mollaka (Sébastian Foucan) in Madagascar. When Mollaka runs, Bond chases – for nine fast and furious minutes.

This is a breathless statement of intent from the filmmakers. The sequence powers through a construction site, by way of two enormous cranes, before moving through the streets to an embassy. Freerunning founder Foucan showcases his skills by scaling vertical girders, bounding through tight gaps and leaping from crane to crane.

Bond counters each move, establishing Craig’s tough and relentless take on the character – he’s smart enough to identify shortcuts and robust enough to smash through walls. When Mollaka fires an empty handgun at Bond, he doesn’t flinch; when Mollaka throws the gun at him, Bond catches it and throws it right back.

Casino Royale is one of the best action movies of recent years, with a strong plot (straight from the book, with a few modern twists) and a style of, in Bresson’s words, cinematographic writing that captures the mayhem with total clarity. The Bond reboot may have been inspired by The Bourne Supremacy and Batman Begins, but Casino Royale has the advantage of beautifully shot, crystal clear set pieces.

Roger Moore wouldn’t have made it halfway up the first crane – more likely he would have retired to the site office and flirted with the receptionist until Foucan gave up and climbed back down. That might have been the smart move, but Craig’s determination and physicality are both believable and endearing, and sell this as the series’ most entertaining action scene for decades.

1. Escape from Piz Gloria in On Her Majesty’s Secret Service (1969) 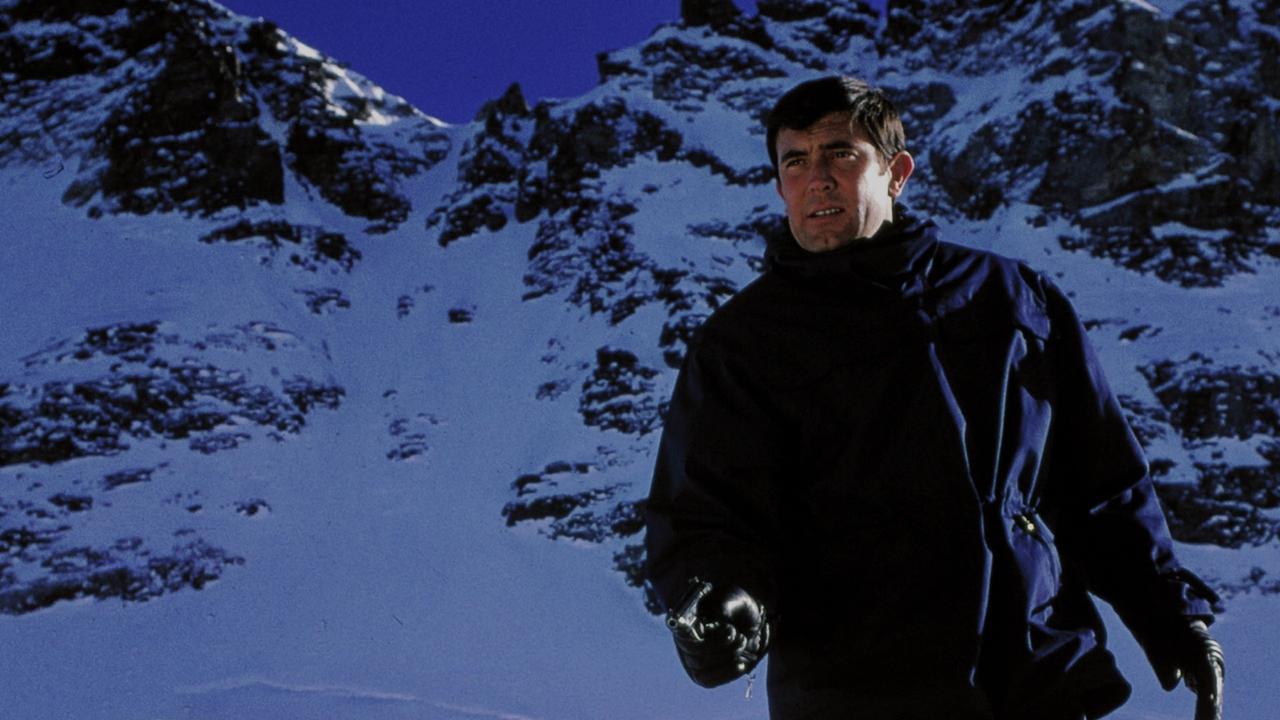 Despite the polarising presence of George Lazenby, this is one of the most popular Bond movies. It’s the closest adaptation of a source novel but also the most cinematic, with a modern pace and a distinctive directorial stamp by former editor Peter Hunt. Michael Reed’s cinematography is stunning and the score is one of John Barry’s best.

Christopher Nolan cited this film as a major influence on his intellectual property heist thriller Inception, and the two have a similar structure – the first half flits between intrigue, plot and tightly-wound set pieces, while the second half is a nearly uninterrupted cavalcade of epic action and stunts.

The 35-minute centrepiece sees Bond escape from Blofeld’s Alpine clinic and stronghold Piz Gloria. The bad guys shut him in the cable car’s wheelhouse – a rookie mistake, but it takes Bond a gruelling amount of trial and error to climb along the cable, through the aperture and out over a snowy abyss. He doubles back for some skis, then leads Blofeld (Telly Savalas this time) and his henchmen on a merry chase down the mountain.

There’s a stunning, vertiginous struggle on a precipice overlooking a Christmas-card town, and once Bond reaches civilisation and tries to hide in the crowd, the whipcrack editing (by John Glen, who directed five films later in the series) heightens the sense of paranoia to Hitchcockian levels.

Bond girl Tracy (Diana Rigg) is re-introduced in a genuinely romantic moment amidst the chaos. They escape in her Mercury Cougar with the bad guys in pursuit, and Tracy wins Bond’s heart by correctly identifying the nearside door and incidentally winning a stock car rally during the chase.

They earn a beautifully written, soft-focus interlude, but it’s all too brief and by morning they’re back on skis with the villains close behind. An avalanche rounds off the sequence in spectacular style, allowing Blofeld to kidnap Tracy and set up the finale – which arrives after about five minutes of screen time.

If the Bond series can claim a masterpiece, it’s this one.

Author Bio: Andrew Gunn is a director, screenwriter, playwright and cinephile based in Scotland. When he’s not hunched over a notebook mainlining caffeine, you might find him working with the French Film Festival or Baltic Film Society. His latest film, period noir thriller Reflections of a Private Eye, had its world première in Glasgow on 8 July – find out more at http://www.deepfriednoir.com or http://www.facebook.com/reflectionsofaprivateeye.