Utterly charismatic and animated on screen, no best list including actresses cannot not feature her name on it. Keaton, like Al Pacino and James Caan, got her major start in the Godfather (1972) as Michael Corleone’s love interest, Kay. The beauty of the Godfather that is often ignored is the way that it, unlike any other film ever made, managed to exceed expectation in such a substantial way.

Much of the credit can be apportioned to the likes of Keaton, who put in soothing yet tense performance as Kay. Keaton’s performance really reflected the former integrity Michael Corleone possessed prior to his ingratiation into mafia life, through her innocence and hopefulness. This provided good constrast, and mapped out a journey for the progressively disgruntled and melancholic Kay the audience sees in Godfather Part II (1974) & III (1990).

Although notable in the Godfather films, Keaton is central to the successes of Woody Allen’s films. In the 1970s alone, Keaton featured in six films written or directed by Allen. Keaton certainly had a knack for both deeply dramatic roles, displayed exemplarily in Interiors (1978) and also for comic roles, in Love and Death (1975) and of course, Annie Hall (1976).

It was Keaton’s timing in terms of facial expressions, body movements and spoken words that rendered her equipped for delivering great performances in any kind of film. In all probability, her close working relationship with Woody Allen would have enhanced her understanding of the roles she was to play in his films.

Keaton has been taking many roles in romance films aimed at elderly audiences. In this time, she has played opposite to Jack Nicholson, Michael Douglas and Kevin Kline. This emerging pattern in the later years of Keaton’s career has meant that audiences are still embraced by her boisterous screen presence.

Redford was one of the few actors that successfully continued to carry the baton of film stardom, inherited from the likes of Humphrey Bogart and William Holden. Blessed with good looks, Redford absolutely fit the bill. However, it was entirely his talent that translated his promise into good performance.

Carrying on the momentum he had gathered in his breakout role in Butch Cassidy and the Sundance Kid (1969), Redford continued to make waves in the Pollack romance film The Way we Were (1973) and the Sting (1973), which marked Redford’s second major collaboration with Paul Newman and George Roy Hill. The relative opposition of the sensibilities of these films convey the Redford’s great versatility as an actor.

By the early 70’s, Redford was at the forefront of Hollywood stardom. Perhaps Redford’s greatness resided in the fact that he could bring his undeniable screen presence and reputation to any performance that he delivered. That is to say, Redford seldom delivered an underwhelming performance. Even in the much derided the Great Gatsby (1974), Redford’s performance as the tortured Jay Gatsby was hardly as poor as the film itself.

In the 2000s, Redford was rather inactive. However, since the turn of 2010, he has increasingly appeared in more films. J.C Chandor’s All is Lost (2013) was most certainly a highlight of the films in that year, and arguably in Redford’s filmography. This is not to downplay the mountainous achievements he had made in earlier years, but rather emphasize the excellence of this solo performance.

Redford managed to do the impossible: keep the audience’s attention firmly set on his own journey and struggles as a man precariously lost at sea. The real gold of this performance lies with the fact that Redford was successfully able to maintain his intensity right throughout the film. This is never an easy feat for any actor, especially one admittedly reaching their later years.

Declaring that he did not fit the high standards of handsomeness in Hollywood, Dustin Hoffman was surprised by the heights he managed to reach as an actor. Unlike many other of the actors who feature on this list, Hoffman’s characters were often firmly grounded in reality, and humanly relatable.

This meant he could not rely on grandiose scripts to deliver great performances. Rather, he had to bring out the greatness of his characters himself. This was first witnessed in Mike Nicols’s the Graduate (1967) in which Hoffman played the neurotic, anxiety-ridden Ben Braddock.

This role, and his engrossing performance in the Midnight Cowboy (1969) propelled Hoffman into the limelight at the beginning of the 1970s. Perhaps not gaining the same level of recognition as De Niro and Redford, Hoffman’s work in the 70s was retrospectively of the highest order. Hoffman’s repeated appearances in moderately budgeted films helped to create much needed variety in the kinds of films available to cinema-goers.

In All the President’s Men (1976) Hoffman’s performance as Carl Bernstein represented the dedication he invested into his craft. While other preeminent actors were mainly plying their trade in large-scale, high-budget films, Hoffman revitalised the whole cinema arena.

Hoffman has popped in a couple of films per year since the start of the 21st century. Similar to the volume of films he has appeared in, the quality of them has been underwhelming compared to such films as Kramer vs Kramer (1979). The most recent notable performance by Hoffman was perhaps in his cameo-like role in Jon Favreau’s Chef (2014).

Pacino’s firebrand style of acting has left an indelible mark on the craft itself and the cinematic medium. Similar to many other esteemed actors, Pacino’s first major film role as Michael Corleone in the Godfather (1972) gave audiences a glimpse into the boundless success he would have in the film industry.

The thing that made Pacino conspicuous amongst the pack of talented Italian American actors was his consistently raw and unapologetic performances. This was perhaps best visible in the distinctive way Pacino’s voice growled his most important lines, for which he is largely defined. The line “your out of order” in ….and Justice for All (1979) is a perfect example of Pacino’s distinctiveness.

Pacino has worked for just under five decades, but has a relatively low volume of film roles. This has meant that the majority of the films he has appeared in were selected with judiciousness. The eight roles Pacino took in the 70s was his most prolific decade, with tour de force performances in the Godfather Part l & ll, Serpico (1973) and Dog Day Afternoon (1975).

With age, Pacino’s film roles have become less renowned. The rate at which Pacino has been offered roles has decreased, and the quality of these roles has nosedived even more. The last Pacino-esque performance was as conflicted detective Will Dormer in Christopher Nolan’s remake Insomnia (2002). In the past 14 years, Pacino’s films have been at best forgettable, and at worst, deplorable: see Jack and Jill (2011). 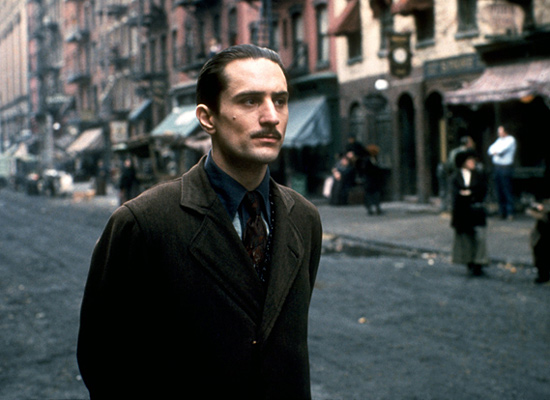 The Italian king of acting, many consider De Niro up there with Lawrence Oliver and Marlon Brando. De Niro’s breakout performance as the wayward, vulnerable Johnny in Mean Streets (1973) not only brought him into national consciousness, but also established his enduring collaboration with fellow Italian New Yorker Martin Scorsese.

Many of the films they would then work together on; Taxi Driver (1976), Raging Bull (1980) and Goodfellas (1990), were exemplary of De Niro’s unrestrained talent to stand out from the pack.

De Niro’s nuanced yet imposing presence always absorbed the audience’s attention without necessity to resort to overplaying his character. Much of this approach to acting was informed by De Niro’s use of Stanislavski’s method acting. Prior to the filming of Taxi Driver, De Niro was one with his anti-hero character Travis Bickle by driving a taxi for a month.

Although popular for his depictions of flawed, male characters, De Niro was far from being a typecast. In regards to the roles he played in the 1970s, the calm yet vengeful Don Corleone in Godfather Part ll (1974) required a completely different performance from the emotionally-fuelled and human Michael Vronsky in Deer Hunter (1978).

It has been widely publicised that, more recently, De Niro’s performances have declined significantly. This is predominantly due to the freewheeling way he appears to accept roles in dubious films. This career turn for the worst seemingly begun with Meet the Parents (2000), and has consistently continued since then.

Most recently, De Niro’s role in Dirty Grandpa has left cinephiles in utter despair. Amid much of the film grime, De Niro has made decent appears in a handful of films, such as David. O Russells’ Silver Linings Playbook (2011) and American Hustle (2014).