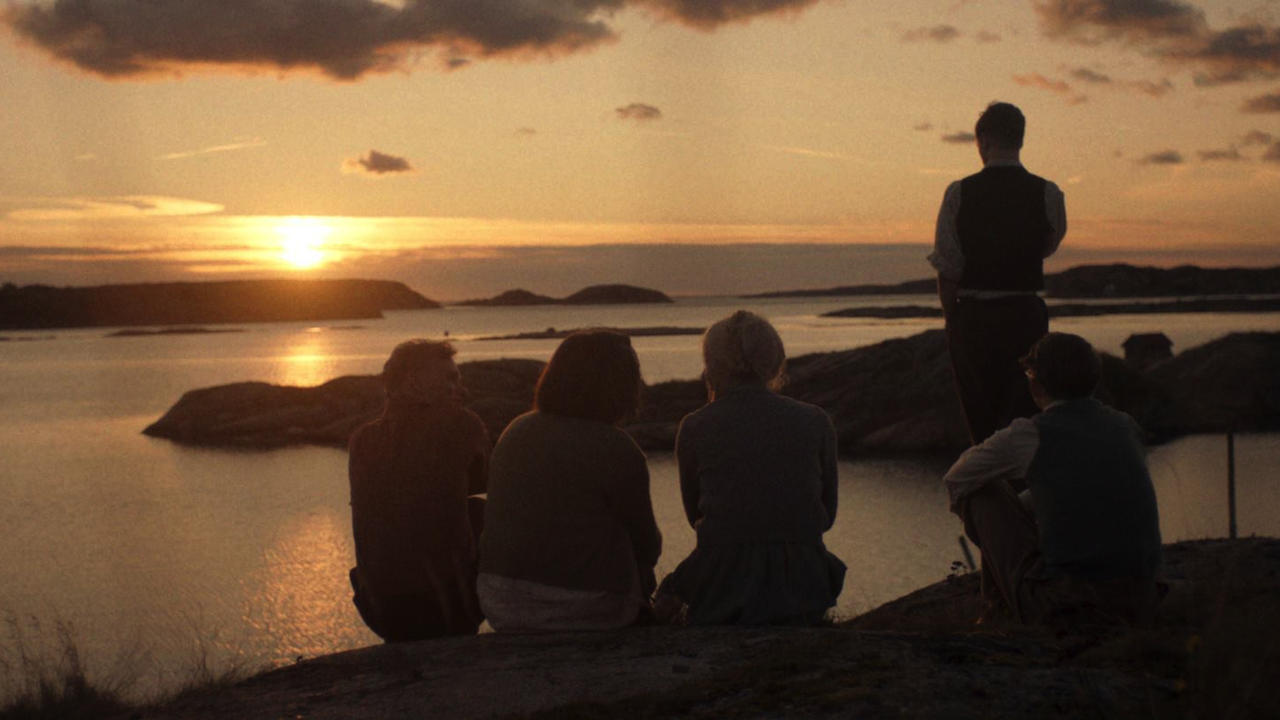 Arrow Films label Nordic Noir & Beyond has become devoted to releasing Euro-crime television series such as The Bridge III, River, and Trapped. Their new release is a 3 DVD set titled The Fjallbacka Murders, which contains 5 feature length television dramas and a hit film, The Hidden Child, that were all novels adapted from bestselling Swedish author Camilla Lackberg, considered to be one of Europe’s most successful crime novelists.

This is brought to you for distribution in region 2 format, making it available to viewers from Europe, Middle East, Japan, South Africa, several other countries, and anyone that may own a region free player.

The series is about popular crime novelist Erica Falck (Claudia Galli), who returns to her hometown of Fjallbacka to live with her husband police officer Patrick Hedstrom and their three children.

Fjallbacka is a stunning old fishing village, but she soon discovers that the town and the people living in it have dark secrets that lead to murder. Since there are so many movies in this series I am not going to get terribly detailed and long winded about each one. Instead, I will provide a brief synopsis of the story of each one and then give my overall assessment of the series as a whole.

This appears first on the DVD to keep it all in chronological order but it is actually the film that was made after the series had finished. Erica has her first child and her parents die in a car accident shortly after. Six months later, she moves into her parent’s house with her husband and baby. A man shows up claiming to be her half-brother, but Erika sends him away. The next day he is found dead. As she begins to investigate her mother’s past during World War II, her mother’s old friends from then are murdered as someone is trying to hide a dark secret.

The Sea Gives, The Sea Takes

Erica finds Fjallbacka’s photographer Stigge murdered in his studio and ends up taking an interest in the case. Along with her husband Patrik and the police force, she begins to investigate and question people related to him. What they discover is a tangled web of deceit as Stigge was not the nice old man people thought that he was and had actually been blackmailing people around town, most notably regarding an incident from the 1960’s involving a feud between two fisherman’s families.

A coast guard diver finds two dead scuba divers after a storm and believes that it is more than just an accident. She asks her childhood friend Patrik for help and he goes with Erica to the village of Kungshamn to investigate. She hides her identity in order to attend a local museum association meeting and the chairman is found murdered at the meeting. When a formal investigation is opened into the three deaths, the common link is a shipwreck from the 1820’s that may have contained some highly valuable cargo.

The Queen of Light

On a cold winter night a young woman is seen sobbing and running across the icy water wearing a traditional Lucia white gown and a crown of candles, where she throws herself into an area with open water and disappears. On St. Lucia’s Day (or St. Lucy’s Day), Erica and her family go to church for the local celebration only to find out that the Lucia crown is missing and a fight breaks out between a group at the church. When Erica starts to investigate the missing Lucia, things from the past come to light as she discovers a secret love affair and a son seeking revenge for his mother.

Erica decides to make the subject of her next book something from her own life, the disappearance of her classmate Peter when she was thirteen. Her investigation starts a chain of events and murders as someone is trying to keep the mystery of what actually happened to Peter a secret.

In the Eye of the Beholder

Erica’s sister Anna comes to visit at the same time that an antiques television program is in town for a taping. Things get weird when Anna finds a woman overdosed and then a man is murdered and his painting is missing. When the painting is found amongst Anna’s belongings, Erica must investigate in order to prove her sister’s innocence while also uncovering secrets about Anna’s past and her relationship with the deceased man.

While the series may be considered somewhat formulaic and predictable at times, it provides enough elements to keep it compelling and engaging as part of the crime genre.

There are also more than enough twists and turns that may or may not keep you guessing, but will have you wanting to find out what the final resolution will be. Galli is excellent as the main character Erica and she has a combination of sex appeal and sophistication to her demeanor. Her husband is much more involved and fleshed out in the five TV movies as compared to The Hidden Child. The police are also more of an element in these as well and they are as much about police procedural as they are her investigating.

The Hidden Child is somewhat different as Erica is the only truly fleshed out character and everyone else is somewhat one-dimensional, with the primary focus being on her and her investigations.

Another excellent part of this series is the location. Set in the beautiful old seaside town of Fjallbacka, the location adds a special and unique element to this that is unlike other noir settings. It is similar in a way to The Girl with the Dragon trilogy just not quite on the same level quality wise and not near as dark. Overall, this is a worthwhile entry for fans of modern noir or crime television series or movies.