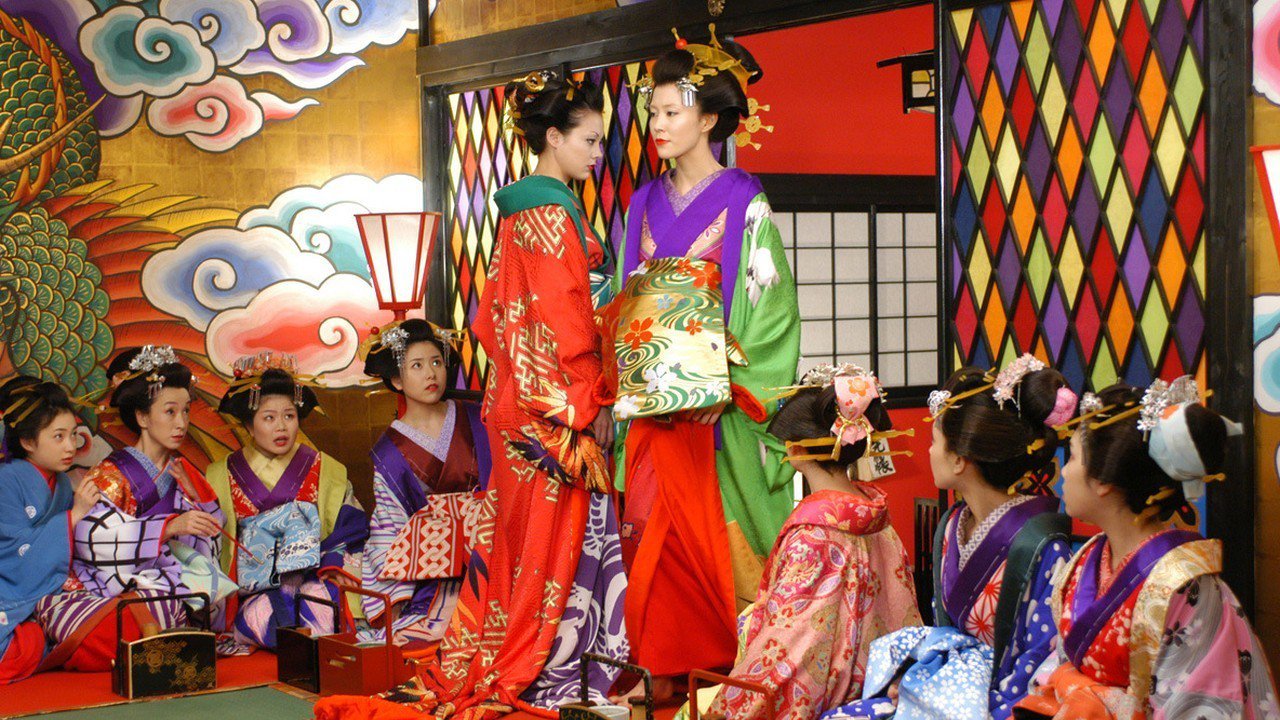 The poster for “Sakuran” perfectly encapsulates what you get from the very film – the photographer Mika Ninagawa’s first foray into the world of cinema – and it is the ruthless attack of vivid colors with crimson red on the front.

Based on Moyoco Anno’s manga, a whacky historical melodrama depicts the slice of a prostitute’s life during the Edo period, in the Yoshiwara district of an alternate Japan. The heroine in question is a feisty, headstrong, capricious, but above all, a feminine girl named Kiyoho (brilliant over-the-top performance by Anna Tsuchiya) who fights tooth and nail (sometimes, even literally) to get what she wants – the high class position of Oiran.

The garish, jazzed-up version of Yoshiwara from Ninagawa’s unrestrained vision reflects the glitz of showbiz industry, so in that regard “Sakuran” can be viewed as a satire of sorts. Only for a few minutes, it becomes less flamboyant, but don’t worry – it quickly gets back to the lavish “colorgies” (get it?) which continue all the way till the end. 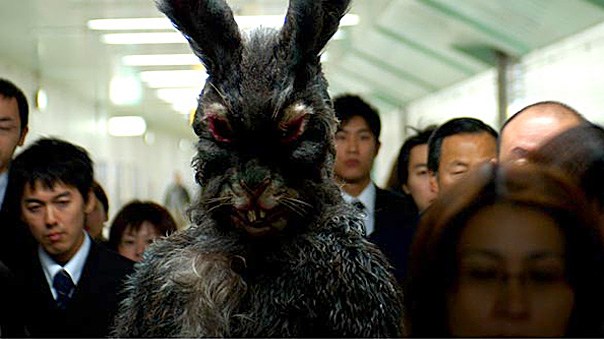 “If you stay still long enough in the darkness, you start to imagine all kinds of things. You can be anything you want to be. You can go anywhere you want to go.”

For Yuichi Arisu, everyday is as boring as it gets and his only vent are the works of the fictive mystery writer Jo Kuroda. After Mrs. Arisu disappears, Yuichi finds himself in time beyond time and in space that is somewhere between the reality of Tokyo and the fantasy of Kuroda’s alternate universe Darkland…

A sophomore feature from John Williams could be compared to Lynch’s thrillers, especially “Lost Highway”, though the creepy rabbit character of Mr. Trickster brings to mind Frank from “Donnie Darko”. Clear allusions to Carroll’s famous novel are also present (Arisu = Japanese pronunciation of Alice and the name of a brothel is Wonderland), yet “Starfish Hotel” is elevated beyond mere plagiarism.

It is an intriguing mystery with great performances, haunting score and beautifully dark imagery, all supported by Williams’s keen sensibility.

“They have taken our voices but we still have words.”

“La antena” (lit. The Aerial) is a neo-expressionist steampunk fairy tale set in a retro-futuristic dystopia, i.e. a metropolis whose citizens attempt to win back their voices previously stolen by Mr TV – a despotic industrialist and the owner of a monopolistic TV station. A cunning and effective gimmick gives the people power to communicate via on-screen text and even subtitles, because a bit of fourth wall breaking does no harm.

Esteban Sapir fuses various influences, from George Méliè, through Russian Constructivism and “Eyes Without a Face” and all the way to Guy Maddin, and delivers a unique, inspiring film which metaphorizes the tyranny of consumerism and negative effects of mass media, as the synopsis above suggests.

An obvious homage to the works of silent cinema, “La Antena” deconstructs its semi-muteness and sports the quirky, imaginative set design (such as the newspaper-sheets mountain), as well as the hyper-stylized B&W cinematography.

The self-thought director Benedek Fliegauf has come up with some of the most outré (and boldest?) films of the last fifteen years, while exploring this “hopelessly fucked up society that we built for ourselves” (in his words).

His experimental mystery (for lack of a better term) “Milky Way (Tejút)” could be categorized as one of the hardest tests of patience – the author himself dubs it a “Zen film” that consists of “ten haiku”. These “poems” are actually long, precise, widescreen takes which point at the insignificance of man in relation to the Universe. Whether they’re ironic, baffling, Dadaist or dryly humorous, they possess a hypnotic quality.

The distant figures of alienated and depersonalized “protagonists” are subordinated to dreary vistas dominated by cool colors and covered in thick web of ambient sounds. All action is reduced to an absurd ritual, as the scenes from everyday life sporadically turn into puzzles whose solutions are concealed off-screen. 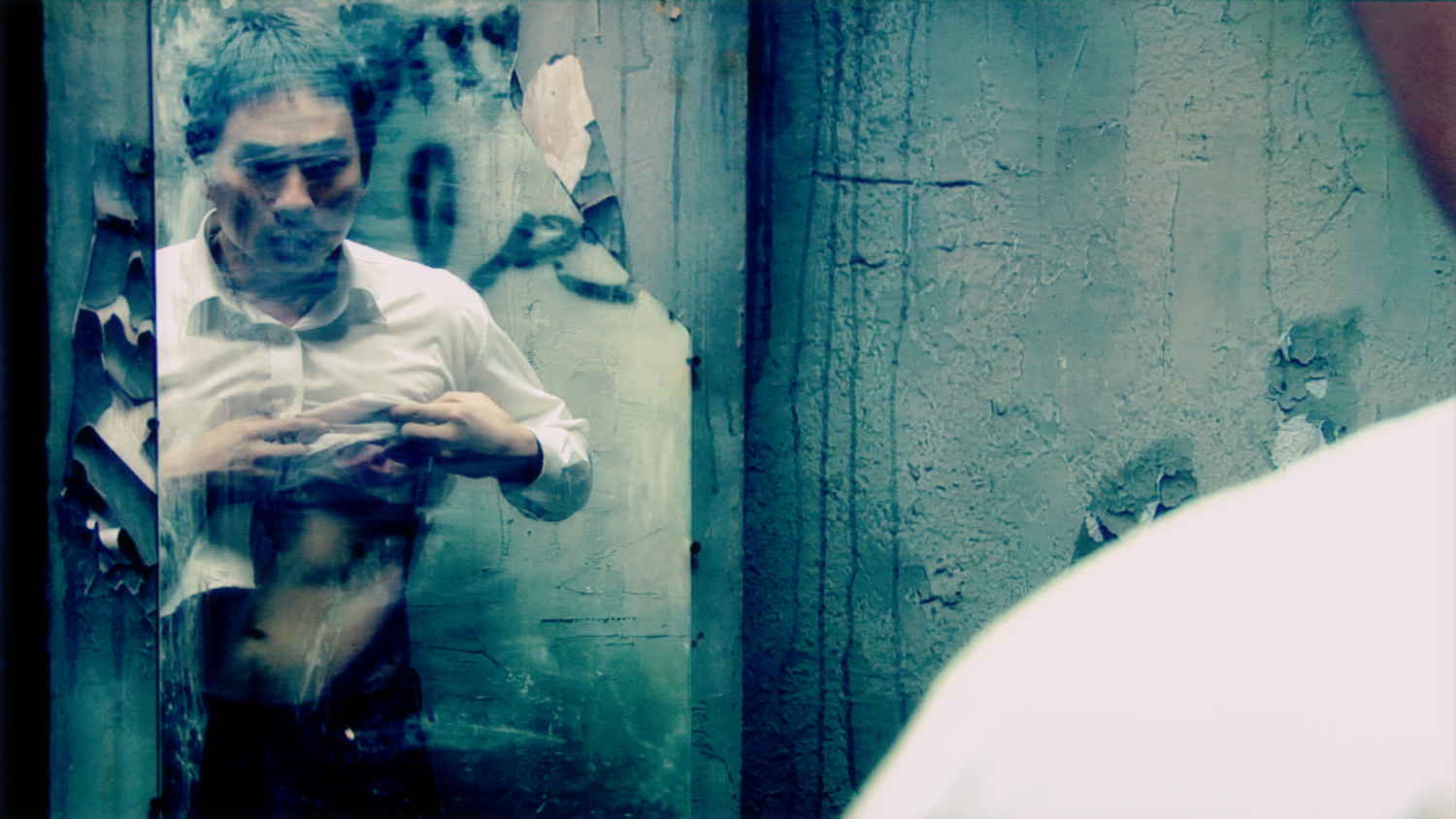 An independently produced meta-film “Written (Ri-teun)” blurs the line between turbid reality and nightmarish fantasy and deals with the concept of a fictive character as a living and breathing (or rather, bleeding) organism.

It revolves around “A” who, at the beginning, wakes up in a bathtub of a dilapidated lavatory and realizes his right kidney has been removed. After the disappearance of the screenwriter who informs him of the meta-situation, “A” starts searching for the end of his story.

The protagonist’s distress which is frequently depicted with hectic camera movements stems from Byeong-woo Kim’s self-critical inner monologue in the background of this intriguing mystery. Both of them struggle to understand each other, as their highly-contrasted worlds clash and merge.

Beautifully shot, with the colors saturated in post-production, “Written” is an intelligent meditation on creative process and a lesson for aspiring filmmakers. 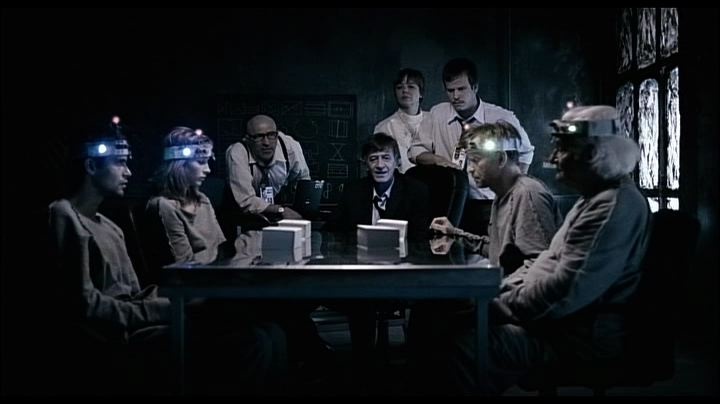 Inspired by Stanislaw Lem’s on a fictitious book of statistics “One Human Minute”, Pater Sparrow’s award-winning feature debut is a sharp mélange of drama, mystery, meta/science fiction and pseudo-documentary which provides a satire on human society, explores a complex nature of reality and reviews the intricacies of existence.

Its central theme is man – paradoxically limited by his intellect and powerless when faced with strange cases, such as the sudden appearance of a mysterious almanac in an elite bookstore. This MacGuffin draws the attention of the Reality Defense Institute, deprives of freedom a bunch of people with symbolic/red herring names and it causes mass hysteria.

“1” can be interpreted as a timeless political allegory or a metaphor for the World Wide Web, whereby its “dualistic” nature is mirrored in the “schizophrenic” visuals. Live-action sequences are intertwined with archive footage, reality hopelessly resists dreams and the high-tech equipment is trapped inside a decrepit building.

(At the moment of writing this article, Sparrow’s film is available at the official YouTube channel of his End and End Image Production.) 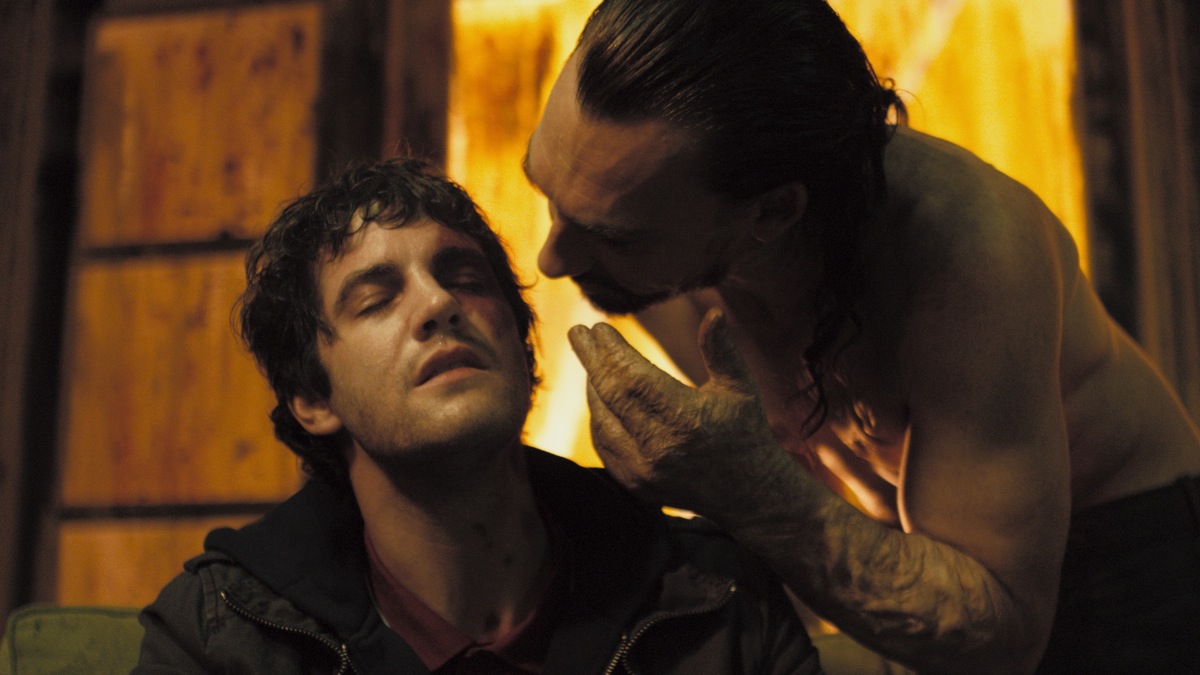 Whenever Ridley conjures up a film (and he rarely does), it is a memorable work of cinema. Even though “Heartless” is closer to mainstream than its elder brethren – “The Reflecting Skin” and “The Passion of Darkly Noon” – one gets the impression it is still not widely known.

Through a dark, modern fairy tale of a young man with a large, heart-shaped birthmark on his face, Ridley communicates with the viewer on many levels. His story blends family drama, Faustian pact, social commentary, the quest for love, the exploration of both mental and physical pain and the meditation on eternal struggle between good and evil.

But, the heart of a heartfelt “Heartless” is Jim Sturgess who plays the protagonist and performs one of the songs on the melancholic, indie-rock soundtrack which complements the screenplay and the colorful representation of (violent) East End London. The rest of the cast is praiseworthy as well, especially Joseph Mawle as diabolical Papa B.

The ambitious Panos – son of the director George P. – Cosmatos takes us back to the alternative 1983 and into the new age institute Arboria where the sinister doctor conduct strange experiments on a frail, yet not entirely helpless girl.

Cryptic, hyper-stylized and deeply personal, “Beyond the Black Rainbow” is based on its author’s blurred childhood memories of imagining films (he was not allowed to watch) from the posters and VHS covers. In spite of its many influences – “2001: A Space Odyssey”, “THX 1138”, “Scanners”, “Altered States”, to name a few – it seems refreshing and quite idiosyncratic, and it is a welcome contribution to the genre of sci-fi/horror.

Boldly stepping into the elusive and occult, Cosmatos explores the fear of the primordial unknown, and he focuses on the individual’s dehumanization in the conditions of mind and body control. At the expense of the obscure story, he accentuates the hypnotically claustrophobic and disorienting atmosphere achieved through the “poisonously nostalgic”, geometrically austere imagery and the outstanding psychedelic score inspired by Carpenter’s music.

Pedantic and uncompromising, Cosmatos brings a meta-experience akin to a feverish dream. 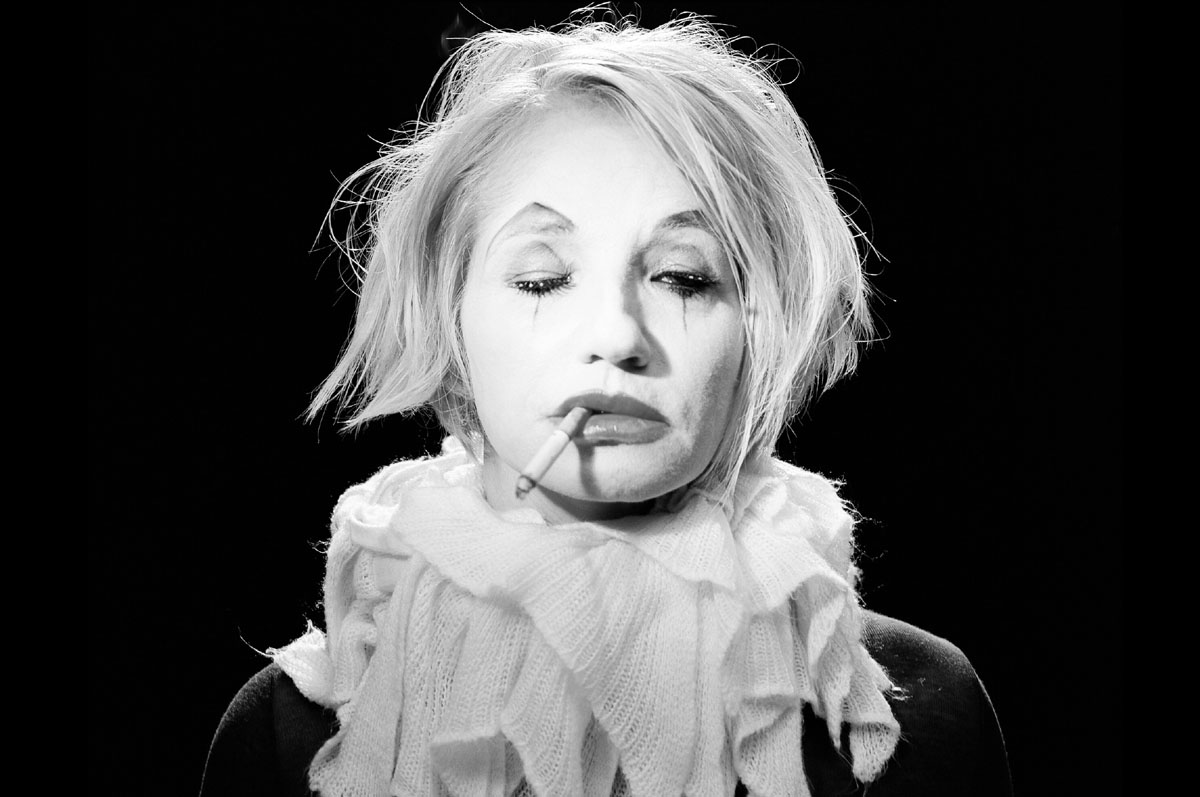 “To make any kind of art, you have to be selfish.” – says Cam Archer in an interview for Indiewire and adds that he allowed himself to be foolish as well with this project, hiding his self-portrait behind the protagonist Colleen West (brilliantly portrayed by Ellen Barkin).

After dealing with the problems of gay teenagers, he turns a new leaf and, in the steps of Wilder and Lynch, reveals the cons of “the dream factory” in a psychological drama spiced with a pinch of deadpan humor and a handful of riddles.

A narrative about the aforementioned actress’s withdrawal from showbiz and her attempt at finding her true self is shred to pieces and then made into a collage of tumultuous emotions, bizarre visions and twisted memories. Colleen’s voluntary isolation doesn’t bring piece, but anxiety, depression and self-loathing that grow into a voracious emptiness.

Realities and bad dreams collide in what could be a virtual simulation of her life, as Archer keeps us deep in the labyrinth of her troubled mind. When mind-fuck turns into mind-rape, the gorgeous monochromatic compositions alleviate the pain.