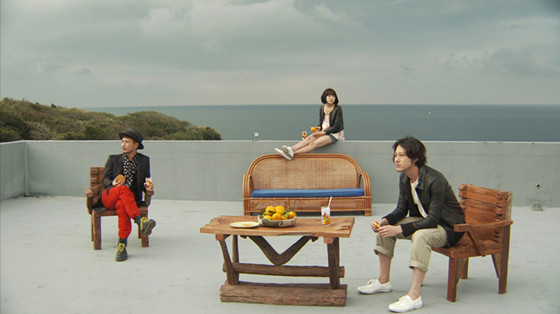 Is it possible for a piece of cinema to appealing, even though the characters motives and actions don’t conceal (almost) anything substantial? The answer is yes, at least according to Shimote’s feature debut in which a trio of young people creates a short-lived kingdom of ennui and enjoys the fruits of escapism.

After the titular heroine loses her-part time job in the bakery, she is joined by a theatre director, Gou, and a photographer, Eito, whose relationship with a fiancé, Nana, is seriously shaken. Together, they run away from Tokyo to an empty coastal inn belonging to Eito’s uncle.

Far from the hustle and bustle of the metropolis, these friends by accident spend their days lying or walking around, pushing the stone wall or playing tennis on Wii, while imagining they compete at Wimbledon. Their ménage-à-trois lollygagging is pictured through a series of eccentric long-take “sketches” spiced with some deadpan humor.

Reducing the dialogue to a minimum and getting rid of the BGM, Shimote relies on the chemistry between the actors and somehow manages to make it visible. He utilizes “milky” colors with red, blue and yellow details which emphasize the protagonists’ deeply buried desires. 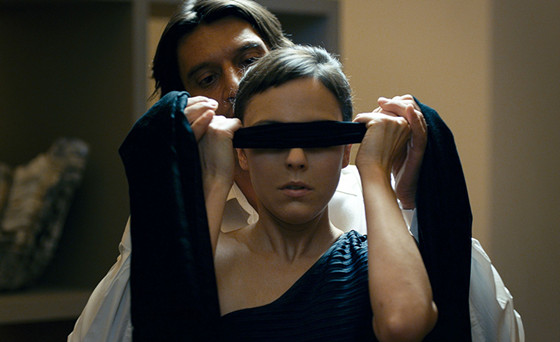 “While I’m caressing you, I see you’re getting old. I love both you and your death.”

One of the most unusual declarations of love comes from the mouth of Alejandro Jodorowsky whose cameo appearance is not unintentional, given that Brazzale & Immesi’s feature debut title contains the name of his very own therapeutic practice.

“Psychomagic” is exactly what the young and depressive heroine Lia needs, especially after her commanding fiancé forces her to abort. A psychological drama which revolves around the two of them and her “shaman” aunt Agata occasionally approaches the horror territory and it works primarily because of the cast’s excellent performance.

The nightmares and hallucinations that accelerate Lia’s already shaken world collapse are injected at the right time and the whole, exquisitely shot film seems to be seen through her distorted prism. And in order to establish the matching atmosphere of mental disorder, the directorial duo pays a great deal of attention to lighting and set design. 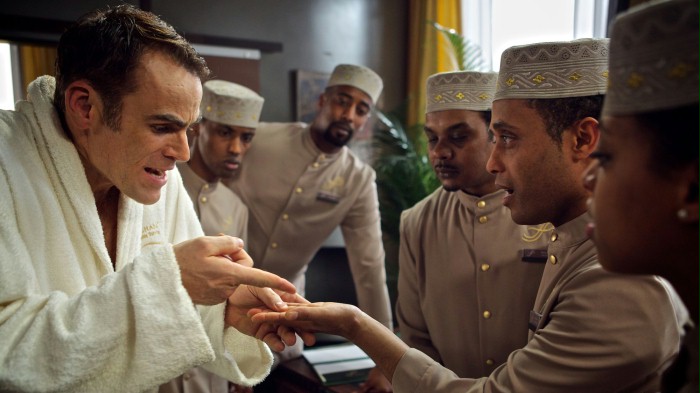 “Age of Cannibals (Zeit der Kannibalen)” offers an authentic, somewhat claustrophobic experience and it is not connected to cannibalism, at least not in a traditional sense of the word. (But still, don’t be surprised if you find yourself watching it in some small movie house, in the company of less than five people.)

It is a sharp, cynical, insolent, twisted, satirical, dryly and blackly humorous chamber drama told in hyperbole and from the perspective of three business consultants – small, yet wicked and neurotic capitalist sharks in human guise. As the story develops, the amount of bites decreases and the charismatic trio of (anti)heroes manages to win a sympathy or two, so the bleak ending brings the viewer down.

In favor of the protagonists’ blindness to the cultural diversity, the cities of the third world (where they operate) are represented as the forests of gray cuboids and only visible from the windows of luxurious hotel rooms.

The stars – Katharina Schüttler, Devid Striesow and Sebastian Blomberg – are all magnificent in exchanging the pointy dialogues written by Stefan Weigl. 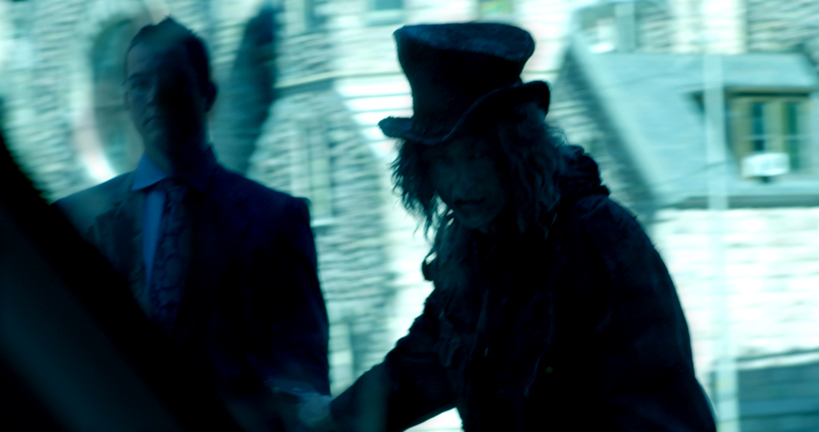 A speculative, self-analytical fantasy “The Frame” could be characterized as a spiritual successor to a multi-genre fairy tale “Ink” with which Winans demonstrated that imagination does wonders even on a tight budget.

It focuses on a couple of strangers – a petty criminal, Alex, and a responsible paramedic, Samantha – whose lives overlap in bizarre ways. The seemingly harmless collision of their realities initiates a metaphysical exploration during which the TV sets becomes the means of communication and the fourth fall is broken.

After leaving the frames of their drab everyday pictures and freeing themselves from the shackles of predestination, Alex and Samantha – David Carranza and Tiffany Mualem, both very persuasive – invite you to question everything you’ve learned and the meaning of existence.

Sporadically, Winans’s grandiose concepts feel heavy-handed, yet the flaws are alleviated by virtue of the sympathetic leading duo, pleasant score and winsome visuals. 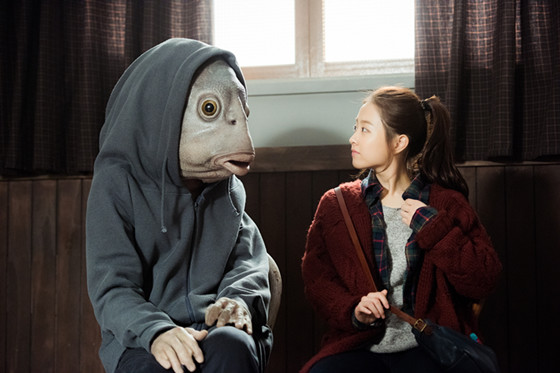 “The Reverse Mermaid” by René Magritte gets a gender swap in Oh-Kwang Kwon’s feature debut – a solid, cynical dramedy of an impoverished student, Goo Park, who mutates into a fish-man after participating in a medical experiment. This wretch becomes the hot topic in the media, but the pharmaceutical company’s conspiracy turns his popularity into notoriety.

A bitter and surreal story is narrated from the perspective of a young and ambitious journalist, Won Sang, who follows Goo’s dizzying rise and nasty fall, pretending to be a documentarian. The passive protagonist is tabula rasa, so everyone makes whatever they want of him – he’s demonized and deified, (ab)used in different ways and accused for being the northern neighbors’ spy.

However, behind the scales and ostensibly empty gaze (of the intentionally artificial mask), it is not impossible to recognize an individual who just wishes for a normal life, notwithstanding the crazy circumstances which the author employs for the precise dissection of the modern human society. Kwon’s sour humor and the fairy tale-ish epilogue are nothing more than the bubbles of optimism in the sea of misanthropy.

After the death of the farmer Tommaso Cestrone (in Italy, known as the Angel of Carditello), Pietro Marcello reimagined his documentary as a unique docu-fantasy hybrid told from the angle of the poor Cestrone’s buffalo Sarchiapone (voiced by Elio Germano).

In the rearranged story, Sarchiapone is taken on a long journey and by none other than Pulcinella who is tasked with honoring Tommaso’s last wish and whom we first meet in a parallel, commedia dell’arte world, playing cards for green beans (!) with his brethren.

Reflecting on a dichotomy of cruelty and kindness / life and death, as well as on a soul and time’s transience, Marcello sends a message whose straightforwardness is forgivable, given that it comes from a sentimental buffalo on his way to the abattoir.

Meandering in its nature, yet quite eloquent, “Lost and Beautiful (Bella e perduta)” is a cinematic peculiarity reminiscent of and almost as equally poignant as Bresson’s “Balthazar”. With a certain je ne sais quoi and shot on expired 16mm stock which wonderfully matches the beauty of derelict vistas, the film seems like it belongs to a long-forgotten era.

Agnieszka Smoczynska’s feature debut is a strange beast – ostensibly tame, but wild; half fish and half girl, just like the heroines. It recounts the tale of two mermaids – Zwota (Golden) and Srebrna (Silver) – who become the main attraction in a burlesque, after joining the musician-family of three.

With a certain amount of nostalgia, they throw the archetypal characters into the wonderfully shot, flamboyant setting of tinsels and melodic pop. They’re also having a whale of a time together with the ensemble of actors lead by Marta Mazurek and Michalina Olszanska, both extremely charming and talented.

Doris Dörrie’s latest film stars Rosalie Thomass as a young (and spoiled) German woman, Marie, who bonds with an aged Japanese woman, Satomi (Kaori Momoi) in the aftermath of the 2011 earthquake and nuclear disaster.

Namely, after her cancelled wedding, Marie travels to Fukushima to join a couple of entertainers for a small group of the elderly in a temporary complex just outside of the contaminated area. However, her plan to find happiness by making other people happy doesn’t develop the way she wants, so she ends up living with Satomi – a grumpy former geisha – in a dilapidated house.

Without further revealing the details of the inspiring story about restarting life afresh (inter alia), “Greetings from Fukushima (Grüße aus Fukushima, aka Fukushima, mon Amour)” brings an engaging, well-acted and superbly directed dramedy with a few genre-twisting surprises. It takes you on an exciting emotional roller-coaster and feasts your eyes with gorgeous B&W compositions.