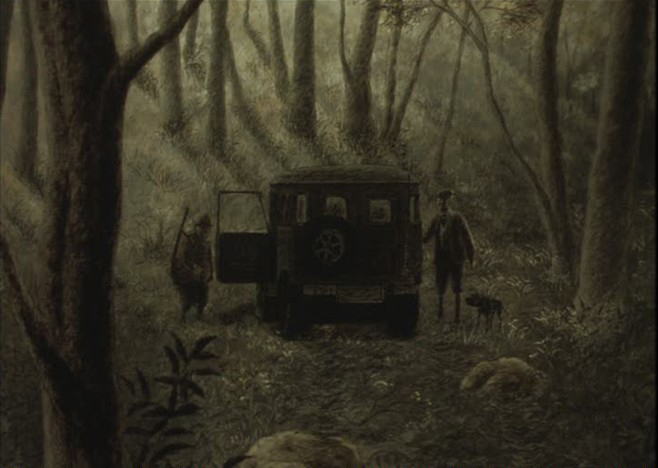 The Restaurant of Many Orders (Chūmon no Ōi Ryōriten) is Tadanari Okamoto’s award-winning swan song finished by the author’s friend and stop-motion wiz Kihachiro Kawamoto and released one year after Okamoto’s death. It is the adaptation of Kenji Miyazawa’s short story and the test for the feature film that, unfortunately, never happened.

After they lose their hounds, two friends come across the isolated restaurant called Wild Cat, in the middle of the forest. Tired and hungry, they hope to be welcomed with tasty meal inside – instead, an enigmatic host turns their sojourn into a nightmare…

As you might already guessed from its synopsis, The Restaurant of Many Orders explores the unenviable situation in which the hunter becomes the hunted. A phantasmagorical mystery with the elements of black humor and horror is completely dialogueless, so Okamoto relies upon the images in spinning the narrative.

The looks akin to the copper plate engravings is achieved with the help of Reiko Okuyama who mimics the metal etching via the specific shading technique, while paying great attention to details. Dominated by sepia tones and accompanied by haunting soundscapes, her visuals make a lasting impression. 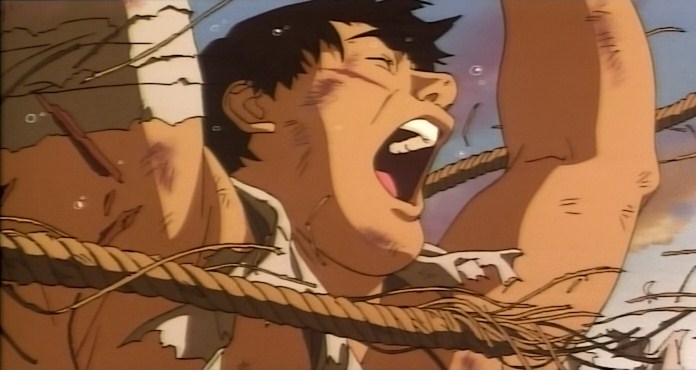 A buried treasure of Japanese animation, Run, Melos! (Hashire, Melos!) is based on the classic of the same name which is written by Osamu Dezaki and inspired by the Greek legend about a strong friendship, superhuman persistence and uncompromising trust and commitment.

Ōsumi allows himself the freedom to make some changes to the original short story, but in doing so, he leaves its essence intact and pays due respect to its author. The undeniable quality of his emotional and optimistic pseudo-historical drama is reflected in the excellent direction and spotless characterization of the protagonists – a naïve and good-natured man, Melos, and a disenchanted, soft-hearted sculptor, Selinuntius – and the antagonist – the tyrannical ruler Dionysius II.

All of the characters are well-defined by virtue of the great voice-acting and semi-realistic artwork by Hiroyuki Okiura (who will later work on Ghost in the Shell and Jin-Roh: The Wolf Brigade) and the one-and-only Satoshi Kon. Also praiseworthy is the background design by art director Hiroshi Ohno who takes us back to the ancient past of Syracuse on the soft wings of beiges and browns.

With its universal themes and admirable aesthetics, Run, Melos! deserves a wider recognition. 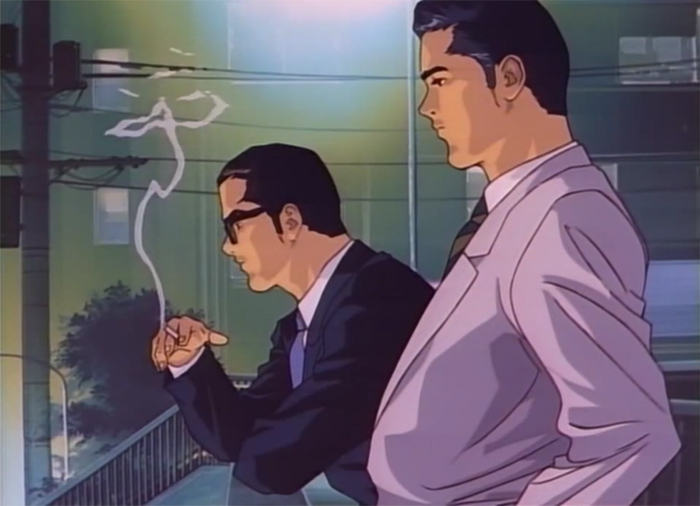 A nearly hour long crime drama focuses on two Japanese survivors of the Khmer Rouge genocide – Chiaki Asami and Akira Hojo – who vow to build their own sanctuary in the motherland at all costs. Taking ostensibly opposite paths, one strives to become the member of Kokkai (the National Diet), as the other infiltrates the underworld.

The story of unbreakable, often tested friendship and the pursuit of success down the Machiavellian road is provocative and morally ambivalent, with the outspoken depiction of modern human society in which the criminals and politicians are equally perfidious and acquisitive.

In such rotten environment, Chiaki and Akira seem to be the least corrupted, even likable, winning your sympathy with the enormous mental strength, audacity, charisma, cleverness and composure. It is not by mere accident they’re physically alike – after all, they are two sides of the same coin.

A great attention is paid to the other characters’ physiognomy as well, since they aren’t “fleshed out” enough due to the tight timeframe. One major criticism could be leveled at the portrayal of females and not only because of their almost manly facial features.

There’s a bit of fan-service in the form of gratuitous sex-scenes, yet the violence is, surprisingly, subdued. Kudos to the animators for an excellent job on a limited budget, as well as to the composer for the cool, jazzy soundtrack. 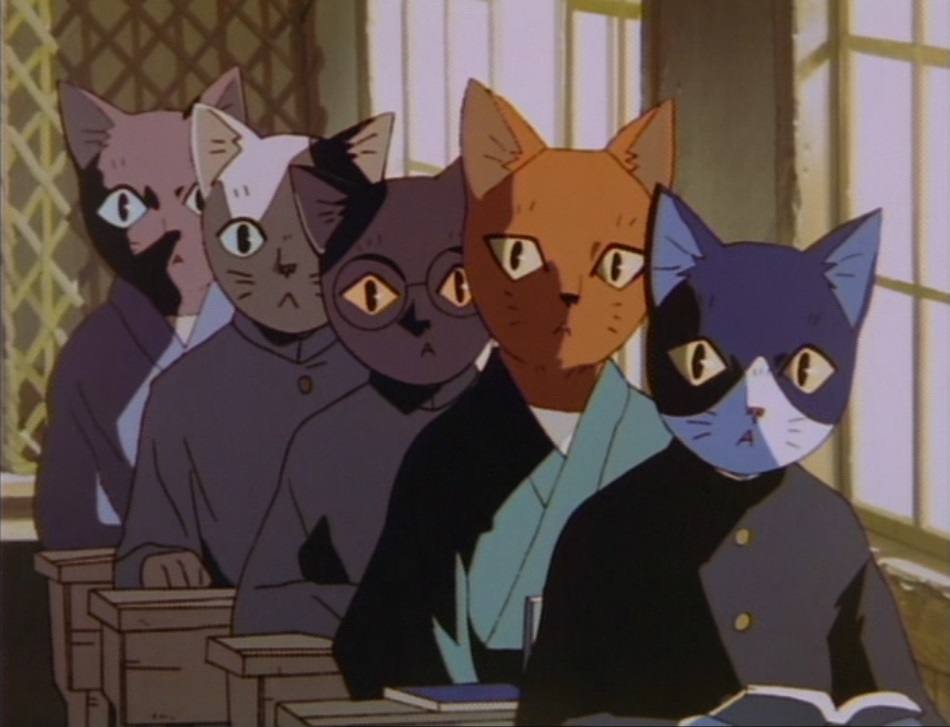 “While we may not be blessed with all the candy we want, we can eat the fresh, clear breeze and drink the beautiful peach-colored rays of morning sun…”

Spring & Chaos (Ihatōbu Gensō, Kenji no Haru) is, simultaneously, a sort of biopic of the poet and author of children’s literature Kenji Miyazawa (1896-1933) and the unique amalgam of a heartfelt slice of life drama and an unrestrained abstract fantasy. Eccentric as much as its central figure, this wonderful anime is unjustly marginalized.

Kawamori spins an intentionally incoherent narrative in accordance with the writer’s quirky view of the world. Delving into the psyche of an incurable, passionate and misunderstood idealist and nature lover that Miyazawa was, he depicts his protagonist’s ecstatic enthusiasm, the unorthodox teaching methods and a Don Quixotean search for the invisible driving force.

A gentle soul of the early deceased dreamer is resurrected through the fanciful imagery which is dominated by anthropomorphic cats as an homage to Kenji’s works for the youngest. Blending of traditional and computer graphics is not seamless, yet the dialogue of disparate techniques resonates with the bittersweet story built on contrasts.

The mysterious, hallucinatory beauty of Spring & Chaos is heightened by the eclectic soundscapes, their highlight being the Kenji Kawai-esque cover of Ave Maria. 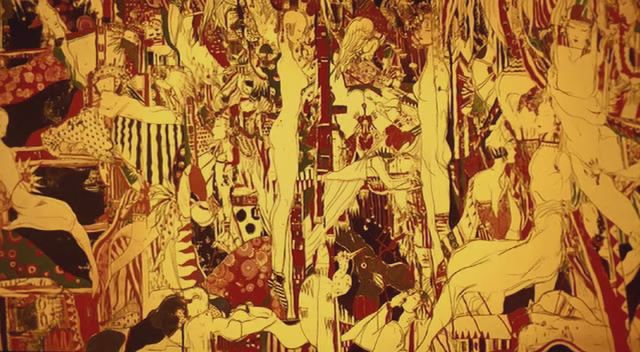 “Let us dream, as always, some world hidden within our own world, a world where wicked, restless spirits move…”

Along with Mamoru Oshii’s Angel’s Egg, phantasmagorical “ga-nime” Fantascope ~Tylostoma~ and Bird’s Song, as well as the segment Loneliness from the omnibus Ten Nights of Dreams, 1001 Nights belongs to the group of peculiar works of Japanimation which manage to “seize” the spirit of Yoshitaka Amano’s illustrations.

Combined with some trippy CGI, ethereal 2D animation mesmerizes with its elusive shapes, colors and textures. The dilemma of whether it is an anime or not (given the involvement of the American studios) doesn’t diminish its high artistic value. 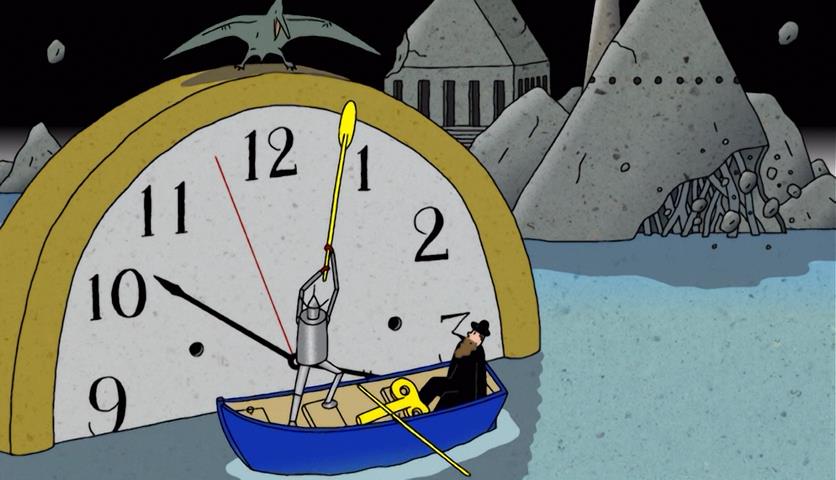 Given Shigeru Tamura’s experimental approach to animation, Glassy Ocean (Kujira no Chōyaku) is not your average anime – in fact, it is so outlandish that it deserves the title of an animated poem. Delicate, surreal and filled with joyful nostalgia, it invites the viewer into another world where time stands still and the titular ocean remains in the solid state.

On the waves of glass, an old man camps with a black cat, as his weird memories and even weirder reality merge into a tale of parallel worlds and larger-than-life dreams. The images of flying fish, aquatic orchestra, robotic boatman, walking skyscrapers, a giant coconut and a wondrous “aerial” whale are both eye-catching and soul-inspiring.

The harmony of “flat”, yet effective (and mostly hand-drawn) design, gentle voices and evocative, euphonious score establishes a soothing, meditative atmosphere of metaphysical awe. Glassy Ocean is a fantasy of cosmic proportions. 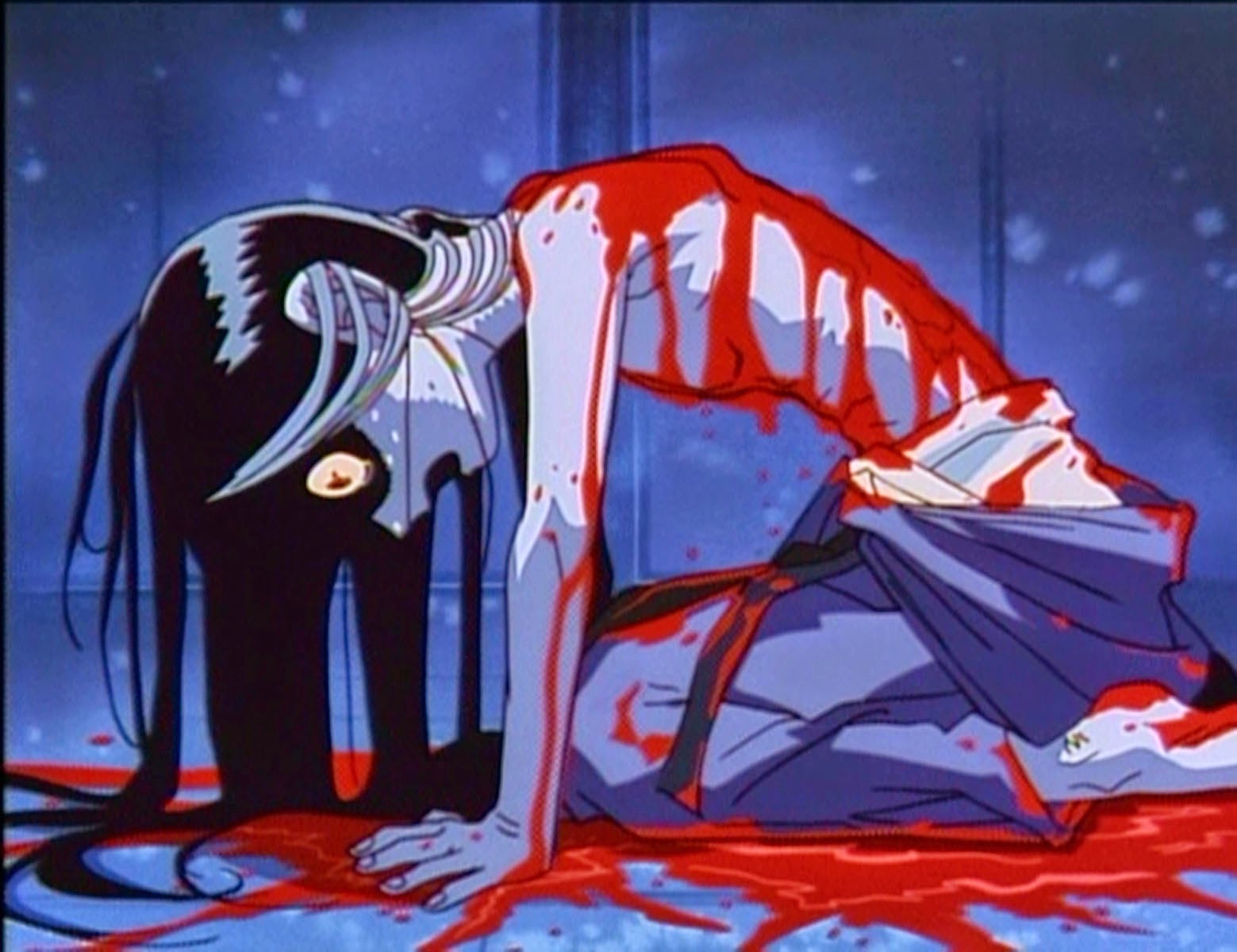 Based on Kazuhiro Fujita’s manga, a forty-minute-long OVA Puppet Princess (Karakuri no Kimi) is the character designer Hirotoshi Takaya’s directorial debut. The word “karakuri” from its title relates to the mechanized puppets which originated in the 17th century and are considered the first Japanese robots.

Under the obvious influence of Kawajiri’s Ninja Scroll, Takaya takes us back to tumultuous era of feudal Japan. A warrior princess who controls “automata” made by her father joins forces with an impulsive shinobi in order to clash with their common enemy – an unscrupulous warlord.

In spite of its simple plot-line and tight timeframe, this dynamically paced action fantasy with the pinch of horror offers a lot of fun, interesting (if two-dimensional) characters, as well as a dark-ish atmosphere sporadically interrupted by (redundant) dashes of infantile humor.

The brilliant artwork – reminiscent of the 90s – reveals Takuya’s obsession with the eye close-ups and faces distorted with pain and strong emotions. Complemented by the appropriate, Japanese-tradition-inspired music, the animation particularly shines in the scenes of bloody battles which defy the laws of physics.

So, if you are OK with the bits of slapstick and animated violence, Puppet Princess might be the cup of obscure anime coffee you’ve been looking for.