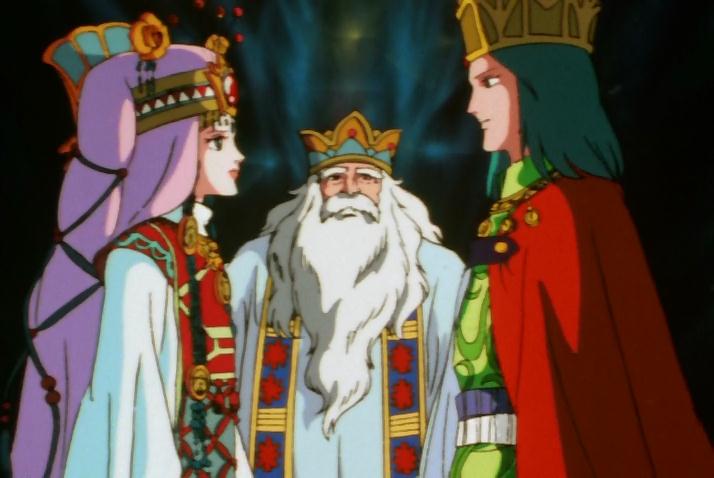 A “TV special” Andromeda stories is based on the manga of the same name illustrated by Keiko Takemiya (To Terra…) and written by Ryu Mitsuse (known for a sci-fi novel Ten Billion Days and One Hundred Billion Nights). In a typical 80s fashion, it is a scrumptiously bizarre mélange of a few genres and disparate ideas.

The action takes place on a fictitious Earth-like planet Astria in the Andromeda Galaxy. The insidious invasion of alien-machines turns the once peaceful empire of Cosmoralia into a dystopia, separating the royal twins. One day, the siblings are united by fate (and the resistance) in the battle against the mecha-conquerors.

If you dedicate 80 minutes of your time to this “space opera”, you will find out how the prehistoric creatures and monkeys armed with sabers fit in. Amongst many sources of inspiration, you should recognize the theories of Big Bang and directed panspermia, Eastern concept of reincarnation, Indian mythology, Islamic and samurai culture.

As cinematic role models, the authors quote Godzilla, Planet of the Apes, Star Wars and Invasion of the Body Snatchers, yet the film doesn’t seem to be purely derivative. On the other hand, the self-conscious AI seems to be the forerunner of Skynet from The Terminator. The breathless pace leaves no space for nuanced characterization, but the artists do a fine job in bringing the extravagant antics to life. 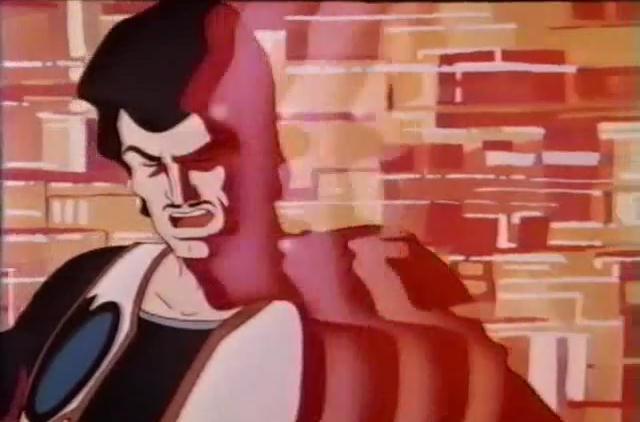 Action, romance and sci-fi adventure clash and intertwine in unfairly forgotten Earth Story Telepath 2500 (Chikyū Monogatari: Telepath 2500) which is so obscure that its un-subtitled VHS release is available in digital format only. It’s interesting for Yoshitaka Amano’s peculiar character design and for the fact that it’s the sole animated film in Yamane’s oeuvre.

According to the description from Allcinema.net and The Anime Encyclopedia by Helen McCarthy and Jonathan Clements, the story begins in 2500, on the fifth planet of the Tolphan system managed by a supercomputer. Opposed to the idea of a machine-guided future, 18-yo Will boards a spaceship and follows the telepathic signals of a mysterious beauty…

Once our hero arrives in some remote corner of the Universe – on the world of winged, naked ladies and hostile cyborgs lead by an evil priest – there are plenty of recognizable borrowings from Flash Gordon, Barbarella, Planet of the Apes, Kubrick’s Odyssey and even Romeo and Juliet – all packed in the vein of Saturday morning cartoons.

The combination of camp aesthetics and Amano’s melancholic artwork makes for an eye-pleasing experience complemented by the eclectic soundtrack which fuses disco, ballads, synthesizer and (overly) dramatic orchestrations. The chintzy attractiveness of EST 2500 is quite seductive. 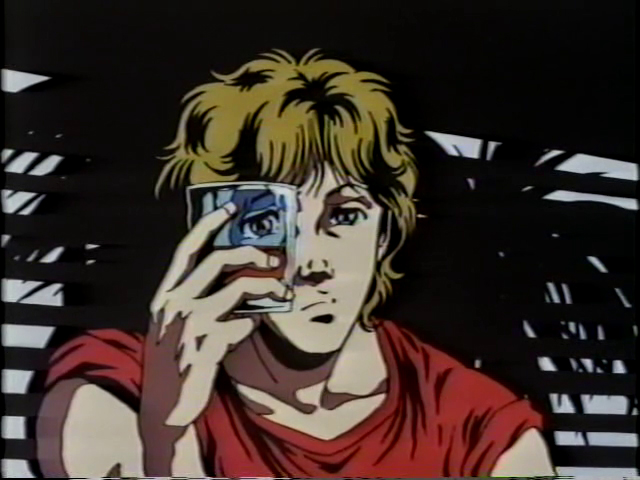 Made during the last years of the Cold War, California Crisis is an authentic example of its time. Rife with pop-culture references and inspired by UFO hysteria and B-movies, it packs an exciting pulp-adventure which begins on the road between San Diego and Los Angeles and ends in Death Valley.

It recounts the mishaps of a loafer, Noera, and his impulsive new-found girlfriend, Marsha, who get involved in top secret “games” of Russian agents and naughty officers of Edwards AFB. Although it offers minimum background information, the protagonists are made likable and their relationship seems credible as much as it is possible between the frenetic action scenes.

Simultaneously, Nishikubo applies and parodies a Hollywood formula, while juggling with plenty of stereotypes and bringing the story to an anticlimactic epilogue – a cheeky joke, indeed. But, what makes his “experiment” stand out is its brilliant style which combines influences of the mid-20th century comics, pop-art and Patrick Nagel’s Neo Art Deco, while remaining distinctively Japanese.

A memorable visual impact is achieved through the strong lines and overemphasized shadows combined with saturated colors and neon lights. The outstanding imagery is accompanied by the funky soundtrack, its highlight being Miho Fujiwara’s “catty” voice in the theme song. 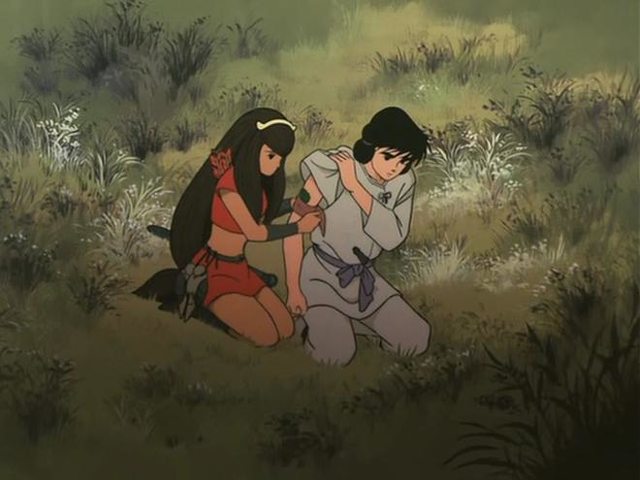 Unfinished manga series Phoenix (Hi no Tori) is considered Osamu Tezuka’s magnum opus. Inspired by Firebird from The Humpbacked Horse and the mythological bird Fenghuang, it speaks of reincarnation and the quest for immortality, inter alia. After a live-action adaptation by Kon Ichikawa and a feature-length anime Phoenix 2772, it got three one-hour OVAs in the mid-80s.

The first one titled Phoenix: Karma Chapter, directed by Rintarō and based on the principles of Eastern philosophies explores the themes of redemption, betrayed dreams and human malice, while questioning the essence of being. Subtle fantastical elements personify the inevitability of death and the self-imposed punishment.

Yamato Chapter helmed by Toshio Hirata (Pet Shop of Horrors) intertwines the topics of revenge, family honor, dark secrets, monstrous customs and the power of love and hate into a narrative about the value of life, whereby the role of the phoenix carries more weight than in Rintarō’s entry.

And the last but not the least is Space Chapter by Yoshiaki Kawajiri (Vampire Hunter D, Ninja Scroll) who abandons the historical setting and, to a certain extent, mythological concept, and delivers an intriguing sci-fi mystery-thriller in which immortality equals damnation.

Every aspect of the Phoenix triptych is carefully thought out, from the beautiful design to ambient synth-score which doesn’t sound cheesy. A true gem of the old-school Japanimation. 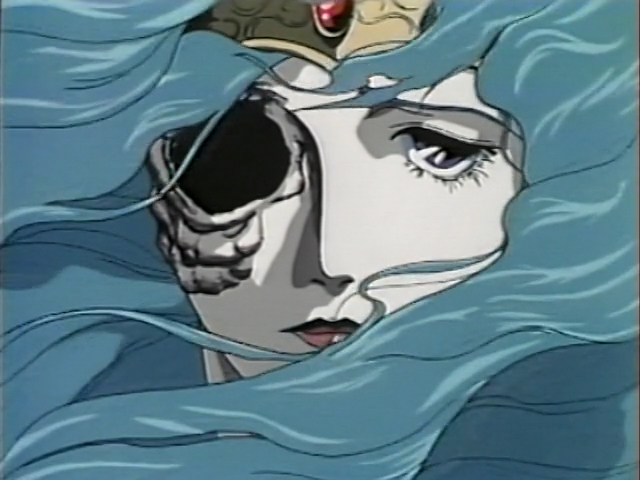 Only around 30 minutes long, Bride of Deimos (aka Bride of Deimos: The Orchid suite / Deimos no Hanayome: Ran no Kumikyoku) is a partial adaptation of (or rather, an advertisement for) Yuuho Ashibe and Etsuko Ikeda’s manga, which revolves around a high school girl, Minako, who is “the obscure object of desire” for a fallen god, Deimos.

Actually, she is the reincarnation of the demon’s younger sister and lover Venus who, bound with thorns, rots in the underworld. Unable to take away the cute and curious Minako just like that, the charming and enigmatic Deimos becomes both her stalker and adviser. So, he follows her all the way to the Ohba family’s estate (and their blue orchid plantation) where one of Minako’s friends have disappeared…

By virtue of Ikeda’s solid script, Rintarō makes the most of a tight time-frame and spins a subtle story of jealousy and bitterness, the deviousness of human psyche and the monstrosity of human nature, but of (venomous) beauty, nobleness and vulnerability as well.

The amalgam of “mythsploitation”, tragic melodrama, dark/horror-ish fantasy and intriguing thriller is wonderfully rendered in a manner that echoes Amano’s elegant and melancholic designs. 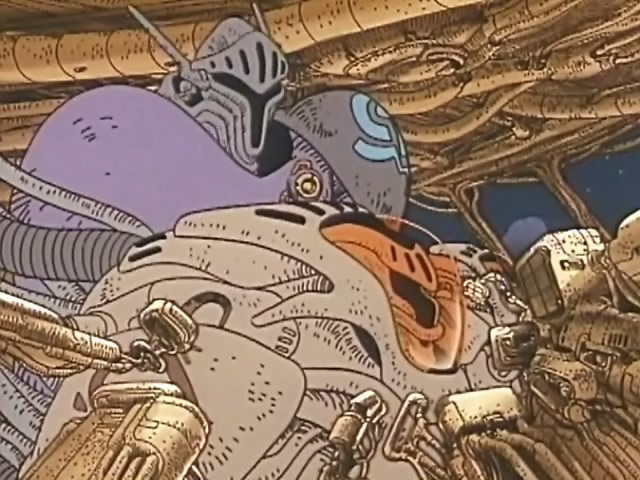 Dragon’s Heaven is a directorial debut for the mangaka, mecha designer and modeler Makoto Kobayashi. His post-apocalyptic story focuses on the friendship between a lovable adventurist, Ikuura, and a self conscious “cydroid”, Shaian, who wakes up after a millennial hibernation caused by the death of his pilot. Together, they will try to defeat Shaian’s old enemy, El Madine…

The very first thing that catches the eye is the stop-motion prologue which reveals a detailed, hand-made and human-sized models of Shaian and El Madine. Even though the transition to traditional animation is not the prime example of smoothness, the author has to be commended for trying something different, as well as for the “grainy” visuals inspired by Moebius’s comics.

Irregular, organic forms of the robots and fortifications have an almost sketchy feel to them, with the shading technique being particularly uncommon. If Toshihiro Hirano had decided to step away from the usual 80s fare in his design of Ikuura, one would have thought that Dragon’s Heaven had been produced in France. The idiosyncratic aesthetics which perfectly fit the setting make this half-hour feature a must-see, in spite of its modest contents. 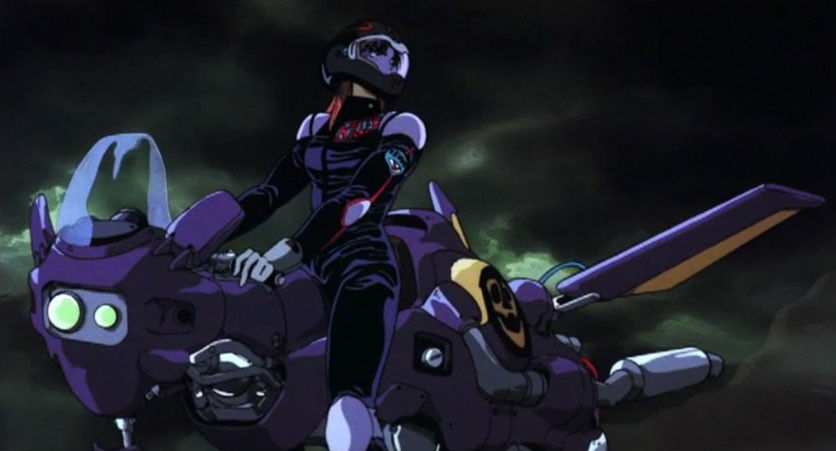 Based on the manga of the same name, Venus Wars (Venus Senki) brings an interesting amalgam of war spectacle, science fiction and coming-of-age drama. A group of “fearless” motocyclists led by rebelious Hiro is faced with a man-made chaos on the planet Venus.

When the capital of their country is occupied by militant neighbors, they stand up and resist in order to teach their corrupted, yellow-bellied government a lesson. By chance, they’re joined by a reporter from Earth – the enthusiastic Susan Sommers – whose hunt for Pulitzer Prize turns into a personal tragedy.

Three chapters are firmly tied into a coherent film in which Yasuhiko deals with the themes of mental and emotional oscillations in extreme conditions. As the author of the original work, director, writer and character designer, he assumes complete control over his film (minus the redundant subplot with a gay soldier) and portrays the protagonist duo of Hiro and Susan with credibility and consistency.

His anime’s forte lies in fluid animation which has aged pretty well, and its symbiosis with the pulsating music by none other than Miyazaki’s frequent collaborator Joe Hisashi. The impressive scenes of ground combat are veiled in “dirty” and fuscous colors, all in accordance with both the setting and atmosphere. A couple of live-action sequences intensify the severity of a proposed futuristic reality.