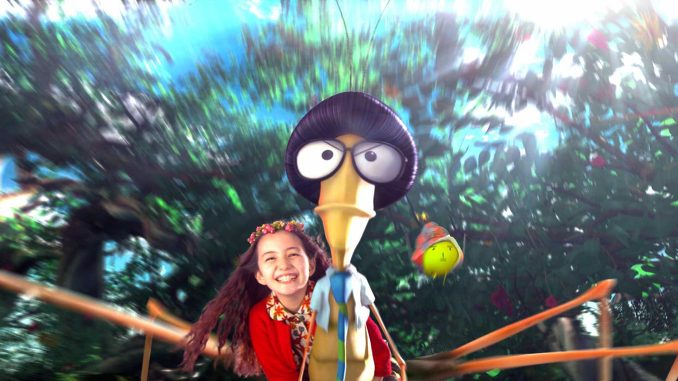 Okunuki used to be a tycoon but now spends his time in a sanatorium of sorts, along with patients that include a former child actor that currently suffers from suicidal tendencies, a transvestite, and Paco, a young girl who insists that Onuki to read her one of her books.

Nakashima directed a fairytale for adults, incorporating in it some drama and a bunch of absurd characters portrayed as caricatures.

His usual tendency of flooding the screen with colors found its apogee in this film, which is filled with overwhelming visual effects and CG. Koji Yakusho, who plays Okunuki, is sublime as always, even in such an absurd part. 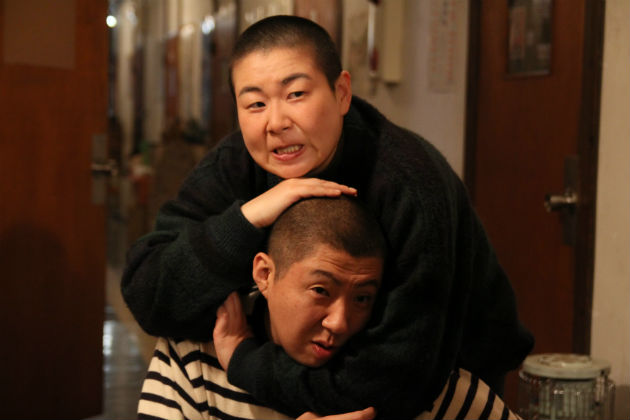 Fuku-chan is a kind painter who works on buildings and has surrounded himself with a number of misfits, constantly trying to mediate their disputes. These include one who used to steal women’s underwear, and one who carries a pet snake around with him. Eventually, a woman from his youth reappears in his life, changing his routine forever.

Apart from the illogical characters, the film incorporates slapstick humor and a number of surreal notions and themes, chiefly among them the ridiculous photographer with the absurd camera. However, the film’s biggest preposterousness lies with its protagonist, who is actually a woman in real life, although it is difficult to realize the fact just by watching him/her. 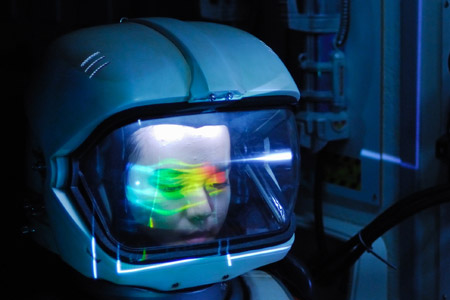 Yoshihiro Nakamura of “Dark Water” fame directed an odd film about a band that managed to produce a punk record before the Sex Pistols, and the story of its members that may result in saving the planet from a giant meteorite.

The film concentrates in the effect the recording has in a number of initially seemingly unrelated scenarios, including a romance between a ferry employee and a pretty girl, elderly rockers in wheelchairs, and prophesying priests.

Behind the odd notions and storyline this film entails, hides quite an elaborate direction and scriptwriting that amount into a brilliant movie. 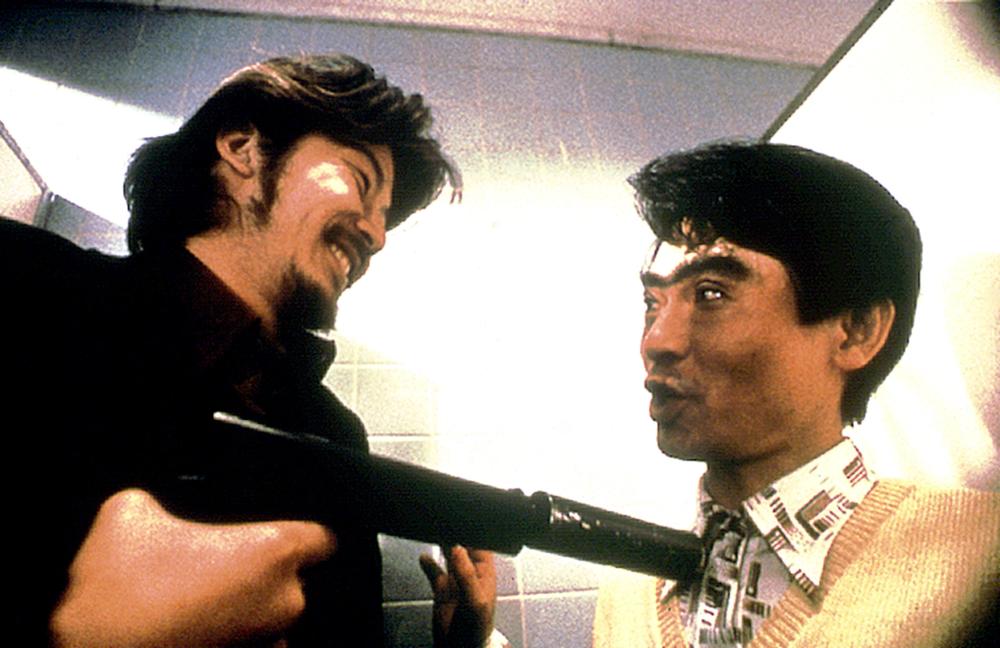 The story is about Samehada, a Yakuza who steals from his boss and while on the run, bumps into Momojiri, a girl who is trying to escape her uncle, who has developed a sexual obsession with her. After them are a number of sociopathic Yakuza dressed in high-end fashion, and a peculiar hit-man who was hired by the girl’s uncle to bring her back, but who eventually falls in love with Samehada.

Although it is probably one of the most absurd Yakuza films ever shot, this movie is quite elaborate in its directing and editing and has a great cast including the curio regulars, Tadanobu Asano, Ittoku Kishibe and Susumu Terajima. However, the one who truly steals the show is Tatsuya Gashuin as one of the weirdest hit men ever conceived.

The script follows Igarashi, a blue-collar worker who is laid off the factory he used to work at, and subsequently spends the next 24 hours roaming the streets of Tokyo. Along the way, he meets a dying Yakuza, is arrested, wins the lottery, meets a ghost played by Seijun Suzuki, and gets hit by a car.

Sabu wrote and directed a surreal film that presents a number of seemingly disconnected incidents. However, as the story unfolds, it becomes obvious the movie actually deals with issues of mortality.

Although the dialogue is scarce, particularly in the first 20 minutes when it is almost non-existent, Susumu Terajima, who plays Sasaki, does a great job of portraying a number of feelings and thoughts simply with his facial expressions and body stances.

“Blessing Bell” was screened at a plethora of international festivals, eventually netting awards from the Berlin and the Cinemanila Film Festivals. 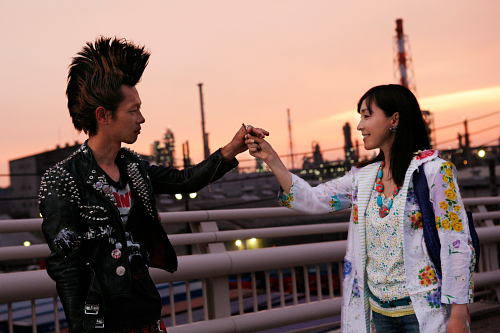 Haname Jinchoge experiences a series of misfortunes: her magazine closes, the photographer she has a crush on moves to Italy, her mother is hospitalized after falling into a swamp, and she loses Gonzaburo, her favorite black rabbit.

However, this series of events result in her meeting her long lost father, a peculiar antique storeowner named Light Bulb. Furthermore, when he sells her a key to a warehouse allegedly containing his biggest treasure, the story takes a rather peculiar turn that eventually results in the appearance of a dragon.

Satoshi Miki took a story that could have easily been a family drama and transformed it into a surreal, incoherent comedy that ends up being extremely enjoyable, despite its evident oddity.

Kumiko Aso portrays a very likeable protagonist as Haname, who never seems to back down or lose her easygoing attitude, despite the hardships she faces. 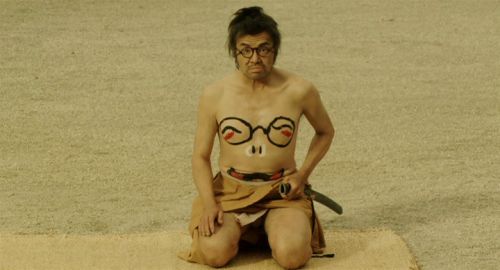 After his wife’s death, Nomi Kanjuro illegally abandons his clan and throws away his sword, thus resulting in a bounty set upon him. While he roams the country with his 9-year-old daughter, Tae, three assassins go after him and eventually manage to arrest him.

He is sentenced to death but at the same time, he is given an opportunity to avoid his fate if he manages to make a grieving boy-prince laugh in 30 days. Although the regular craziness of Matsumoto is evident once more here, this particular film has a clear narrative structure, in contrast to the rest of his titles included on this list.

Furthermore, “Scabbard Samurai” has a touching family dramatic element that takes place between the two protagonists, although it is hidden between the absurdities of Nomi’s efforts to make the prince laugh.

Matsumoto drew heavily from Nomi Takaaki’s comic appearance, who is actually an amateur comedian that initially appeared in a talent show the director presented. He plays a clown-like character that is willing to use extreme measures in order to achieve his goal. Moreover, he does so in a humiliating and ridiculous fashion, maintaining his apparent detachment.

Through him, Matsumoto presents a comment about the entertainer as a concept, someone who is willing to do anything to entertain his audience.