Many would consider the Pokémon franchise to be the largest international success for anime of all time, and one that did the most to bring anime to primetime rather than late-night Western TV. At the height of its success, the Pokémon videogame, anime, card game, and collectible toys had fans of all ages. The cartoon was especially attractive to children and teenagers, which allowed it to be shown on daytime and Saturday morning cartoon blocks.

Pokémon, translating to Pocket Monsters, is a story and game about collecting and training monsters for tournament-style battle competitions. The videogame was created by Satoshi Tajiri, and the concept was inspired in part by real world activities like insect collecting.

In the anime and film series, the main characters use their Pokémon to battle in gyms and to ward of enemies and solve problems in their world. The show follows Ash Ketchum and his yellow lightning mouse Pikachu around on adventures with recurring friends and enemies. The Pokémon do not speak human language but become attached to their owners like pets, and over time evolve into more powerful versions of themselves.

Pokémon: The First Movie was released in US theaters following the success of the TV show. The director and writer were Kunihiko Yuyama and Takeshi Shudo of the TV series. The action and adventures scenes of the movie lived up to the TV show and were a large success at the box office. In keeping with its merchandise tie-ins, a free trading card was given to each moviegoer. 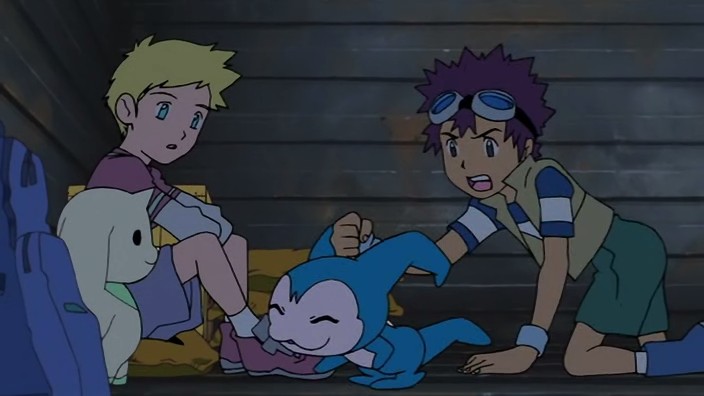 Digimon bears similarities to Pokémon in that it is a story about battle monsters based on a game, in this case an electronic virtual pet toy. The toy game was created by Akiyoshi Hongo and was similar to a Tamagotchi pet.

The Digimon story concerns a group of kids that become destined to enter into a fantastic digital world, receive their own digital monsters, and use them to fight against villains. Digimon are talkative and sometimes comical, and are able to evolve spontaneously and reversibly into stronger or combined versions of themselves.

Even more so than with Pokémon, the pet monsters in the movie are reminiscent of both house pets and children’s invisible friends. The main character Tai takes on a leadership role of the group, and uses an orange Digimon named Agumon that resembles a Tyrannosaurus.

The closely related Digimon film and TV series began in Japan in 1999, when the first film was released in advance of the series. In the US, the TV series Digimon Adventure was released in 1999 and followed by Digimon: The Movie in 2000, which compiled edited segments from the first few Japanese films. Digimon was directed by Mamoru Hosoda (Summer Wars) and Shigeyasu Yamauchi.

The movie features characters from the TV show who aged slightly, as well as younger members of a new group of destined children. The film is broken up into sections that involve battles with different enemies, and modernized for Western audiences by using popular rock and pop songs in its scenes. Digimon has since included additional film and TV series such as Digimon Tamers and Digimon Fusion.

Spirited Away is a coming-of-age and adventure drama directed and written by Hayao Miyazaki that has been praised both for its content and animation technique. As the movie opens, a ten-year-old girl named Hiiragi and her parents are moving to a new home, and stop on their way to explore an abandoned bathhouse.

Fantasy enters reality as spirits appear and the girl becomes separated from her parents, who she witnesses being transformed into pigs and captured. Hiiragi is then befriended by a boy who appears human and teaches her how to navigate in the spirit world and reach her parents.

The world of spirits takes influence from ancient Japanese traditions, and in the movie includes a very colorful cast of humanoid animals, monsters, ghosts, and human-like characters. Many of the characters Hiiragi runs into are strange, grotesque, or wicked in the sense of fairy tales, but along with the surreal and phantasmagoric imagery, the film also uses a light sense of humor. 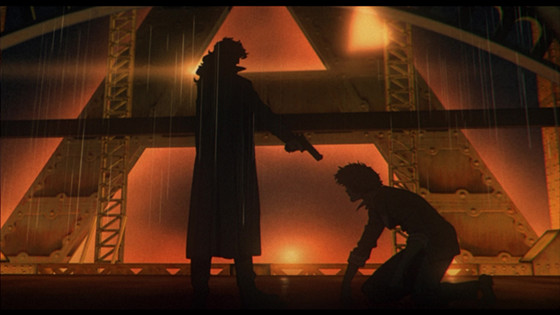 Cowboy Bebop falls into genres like space western and neo-noir, and began as a 1998 Japanese TV series before the release of the first film and manga series from 1998 – 2000. The story follows the adventures of a team of bounty hunters living in a futuristic world where space travel is common and corruption is rampant.

Cowboy Bebop was created by Hajime Yatate, with directing on the TV series and movie by Shinichiro Watanabe, who later created the hit Samurai Champloo. The manga was written by Yutaka Nanten.

The main character in the story is Spike, a pessimistic bounty hunter who displays empathy toward helping people put at risk by the other criminals in his world, which often tend to be crazed or murderous. He is accompanied by a Faye, a sarcastic, scantily clad con artist, Edward, an eccentric hacker with an annoying voice, Jet, a muscular cyborg, and their dog, Ein.

The show explores themes like depression and existentialism with its dark and violence-filled storyline, occasionally mixed with dark humor or comic relief by zany characters. In some of these ways the series bears similarities to the space western anime Trigun, which it was often aired back to back with on late night TV.

The Cowboy Bebop film takes place before the ending of the storyline of the TV series, and follows the protagonists as they try to thwart a terrorist’s destructive plans. It remains true to the qualities of the TV series, and uses excellent animation to create a truly cinematic experience. 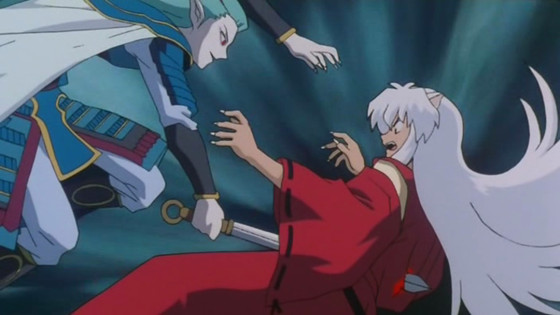 Inuyasha is a fantasy and adventure story set in a feudal Japan setting where demons and monsters walk alongside humans. It is popular for creating a rich fantasy world and a compelling adventure story with dark storytelling elements.

Inuyasha began as a 1996 manga series that was written and illustrated by Rumiko Takahashi, the bestselling female comics artist in history, who known for other popular series such as the comedic Ranma ½. Takahashi also wrote the 2001 movie Affections Touching Across Time, which was directed by Toshiya Shinohara. The TV series was directed by Masashi Ikeda and began in 2000, followed by four subsequent films.

The original plot begins when a present day girl named Kagome is accidently transported into the past, where she is sets free and befriends the half-demon hero Inuyasha. Kagome is revealed to have a magical jewel that becomes shatters across the country accidentally. As demons try to destroy Inuyasha, Kagome, and their allies, the group becomes embroiled in an adventure to collect the fragments of the jewel before anyone else and protect themselves against their enemies.

Affections Touching Across Time is the first Inuyasha film, and takes place within the storyline of the anime show. The plot explores the affection between Kagome and Inuyasha, and their battle against a powerful Chinese demon named Menomaru.

The Inuyasha franchise went on to gain a large following in the West and was among the early anime titles that gained success on late night TV, along with titles such as Dragon Ball Z, Sailor Moon, and Lupin III.