This film revolves around the lives of two orphan boys, Jim Wade (William Powell) and Edward “Blacky” Gallagher (Clark Gable). A kind man raises both as brothers, but when a police officer’s horse tramples the man, Blacky’s anger and resentment against law begins.

As grownups, Blacky makes a living in illegal business, and Jim becomes an assistant District Attorney. Set apart by law, the men are closer now, they continue to love and have high esteem each other, even having Eleanor Packer in this love triangle. However, this will lead to a dangerous result of their relationships.

The film is the very definition of “bromance” in a gangster film. Gable steals the show in every scene. Filled with drama and a great song called “The Bad in Every Man” later changed to “Blue Moon”, this film could not be more pleasing to the general audience. The film also has a real life connection with organized crime; it was the last film real-life gangster John Dillinger saw, and he was gunned down after coming out of hiding to see it.

A Yakuza gang member in Tokyo is assigned to take his clan to Okinawa to settle a possible war between two factions. He heads to Okinawa even though he is suspicious of the assignment. As things go south during the mission, realizing that everything was a setup, he finds refuge on a remote house on the beach. Plotting his revenge against the people who set him up, he becomes afraid of what comes next. After he is successful, is there more to life than what he has known?

The film dwells with the quintessential essence of human nature. Kitano reaches a new level of intellectual maturity best portrayed through this film. The film also has a lot of hidden motifs, including an intense scene in which the characters play Russian roulette. The beach house is a natural location with transcendental implications, and the beach also serves as a symbol of life’s transitory and eternal round.

The film follows Pépé, a criminal playboy who operates according to his standards and beliefs. After a spectacular heist, the authorities, led by inspector Slimane, are desperate to catch him. Falling into delusions of grandeur, Pépé will risk his freedom and become vulnerable to the full extension of the law.

The film is skillfully directed, fooling the viewer into believing it was actually filmed on location instead of the great impeccable set constructed for the film. Alluring to the glamorous portrayal of criminal life, this is an important film for its poetic realism, and it is seen as the Hollywood transposition of the genre. “PéPé Le Moko” is essentially a precursor of film noir. 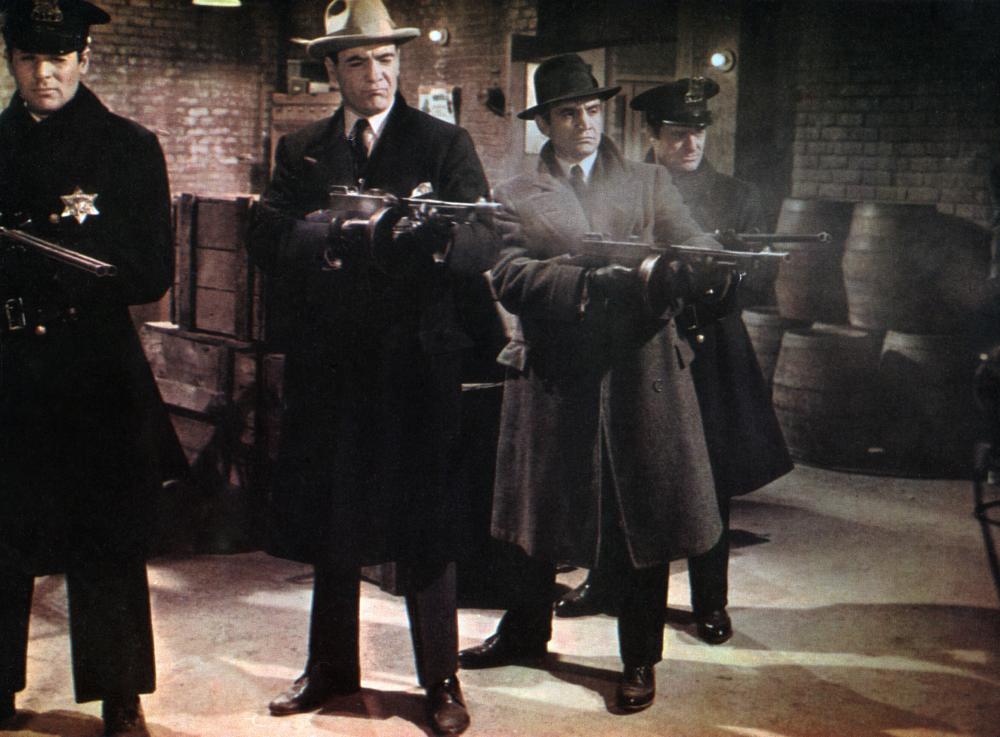 Taking place in Chicago on February 14, 1929, this film follows the real-life event and dramatization that occurred after Al Capone took power of the city’s organized crime. Capone orders the hit of various Bug Moran’s rival gang members. Capone’s men dress as police members will take out the hit that will forever echo in the annals of history.

As soon as Roy Earle, a notorious bank robber, is released from prison, he is on the loose to plot his new and last heist. Roy is going on a downward path. He is forced to work with young, small-time crooks and receives orders from a dying boss, and this will culminate in his final heist where he ultimately fights for survival and the bounty.

The film might be compared to a Western for its style. Bogart’s great performance gives us a different take on a career criminal on his weary last job, and it’s an almost human portrayal of an old legend fading away into oblivion.

This film is about three friends: Costa from Greece, Bobby from Serbia, and Gabriel from Turkey. Bobby wants to be a part of organized crime and applies for an Albanian gang. Now inside the gang, he is in charge of a weapons deal, and he will require the help of his friends. Before the deal is done, the three friends will lose everything, putting their very own lives at risk, and now they must join forces to deal with the situation.

Inspired by Martin Scorsese and Brian De Palma, writer/director Fatih Akin explores the idealized romance and benign gangster life in a new immigrant community fighting for survival in Hamburg. He accurately portrays different cultures mixed through one goal: the easy life. Akin gives us one final insight into the dark recesses of human emotions through the story of three multi-ethnic leads. In a way, the film is homage to Martin Scorsese’s “Mean Streets”.

The film centers on Pinkie Brown (Richard Attenborough), a gangster who runs a protection racket at the Brighton racecourse. Full of ambition for power and grandeur, Pinkie orders the murder of his rival Fred, making it look like a suicide to fool the police.

Ida Arnold (Hermione Baddeley) was with Fred just before he was killed. Unconvinced by the police investigation, she will do anything to pin the crime on Pinkie, unchaining a set of events that will put him on the loose. It makes him desperate and nervous, which leads to a battle between his rival gang and his own gang trying to take control.

Based on the novel by Graham Greene, the film draws the audience into a criminal underworld depicted through canted camera angles and dark scenery, giving it a feel of a British noir thriller. At times, it almost feels like a horror film because of its overall tone and a kind of gothic story. Full of great performances, this film is definitely one of Attenborough’s greatest movies.

Yamamoto, a Yakuza gangster, is exiled from his country when he is defeated by a rival family in war. This results in his boss’ death. Now Yamamoto heads to Los Angeles as a disgraced loner. With the help of his younger half-brother, he tries to regain honor, forming a multi-racial gang out for control of the local drug trade. Things will explode once the gang faces off with the mob.

Takeshi Kitano submerges himself as Yamamoto, taking both director and lead actor chores under his belt. “Brother” is one of Kitano’s most serious films unfolding a series of events leading to massacre, a series of executions, and human sacrifices that a death obsessed Yakuza member must overcome. In the end, Kitano treats us to a glimpse of true friendship and the real meaning of family.

Author Bio: Daniel Miranda is a Consultant/Entrepreneur from Mexico. He is a cinema aficionado and travel enthusiast. His favorite directors are Martin Scorsese, Ingmar Bergman, Tarsem, Wim Wenders, Steve McQueen and Ridley Scott.