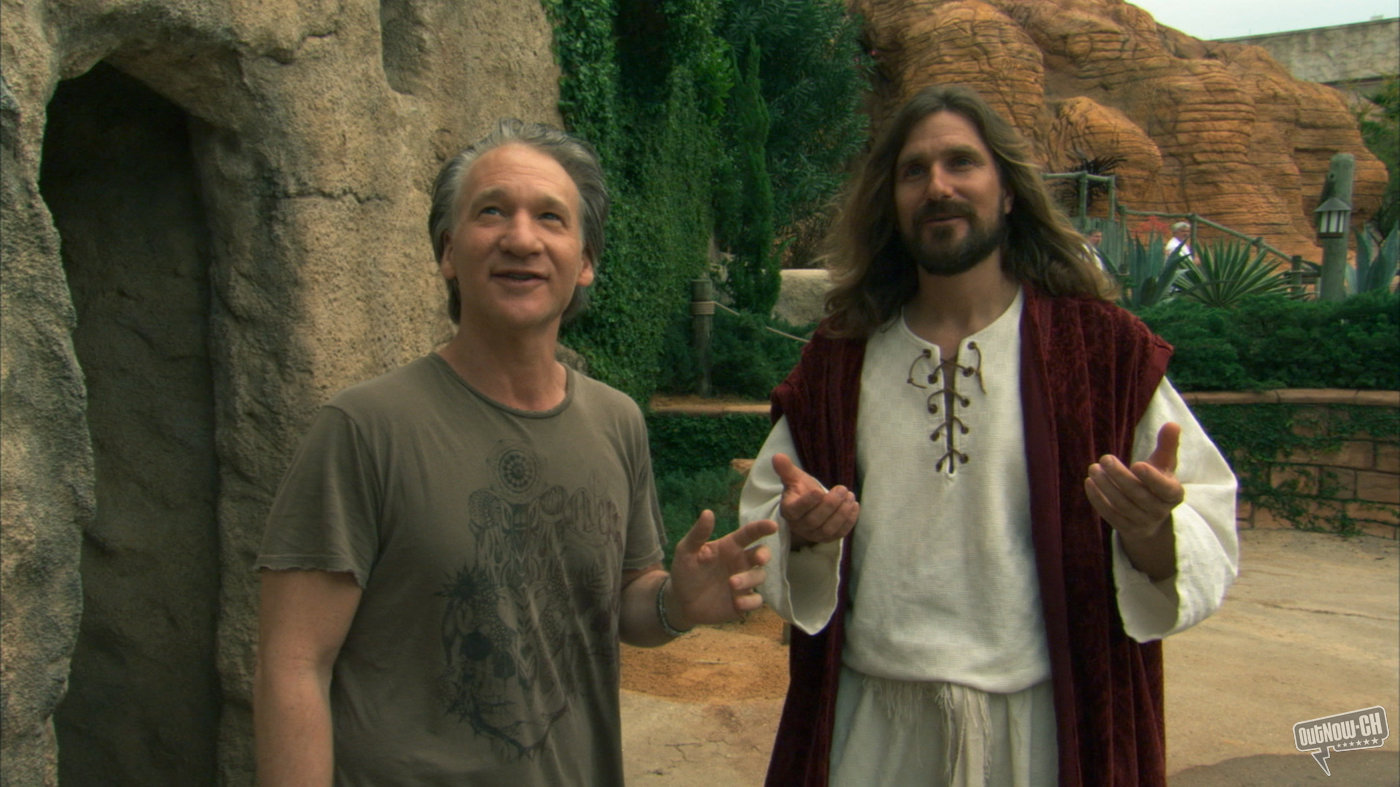 The only documentary on the list, as well as probably the most offensive, Religulous is the brainchild of Bill Maher who visits many religious places and interviews many religious people, and does what Bill Maher does, pokes fun at them. It’s more poking fun at fundamentalism than religion. He has no favorites as all are mocked. True, it’s very Michael Moore-y. The interviews and edits chosen slant a certain way. However, no amount of edits can change the people that are exposed for their utter rejection of science and fact, just faith. 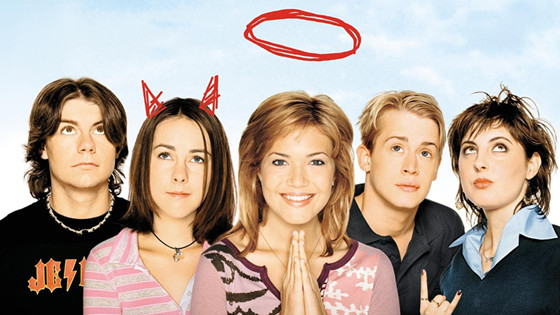 This satire stars Jena Malone as Mary, a Christian girl attending a Christian school who accidentally gets pregnant. The reason? A vision of Jesus prompts her to save her boyfriend from his recently admitted homosexuality with her gift of virginity. Alas, it doesn’t work.

She goes from being a popular “Christian Jewel” and best friends with Hilary Faye (Mandy Moore), to befriending the group of misfits (in this way similar to almost every high school movie ever made). Hiding her pregnancy and now a nemesis to Hilary Faye and the other “Jewels”, resulting in all sorts of shenanigans and consequences for her and the other misfit toys (no prom, falsely accused of graffiti, sent away to Mercy House). As in all high school movies, the prom is not missed, and the real culprit is found. And…… as in very few high school movies, everyone is brought together by the birth of a newborn by a teen out of wedlock.

Saved shows the positive and negative aspects of religion in the form of teenage comedy. Religion unites those who need it, and divides when extremists feel others differences endanger them. 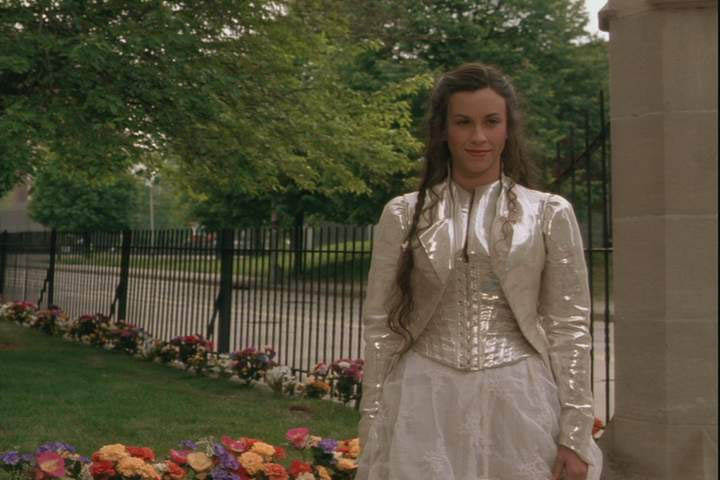 Bethany, the Last Scion (Linda Fiorentino), is called upon to save existence with the help of two prophets (Jay and Silent Bob), the 13th Apostle, and a stripper muse. Metatron (Alan Rickman) needs them to stop two archangels Bartleby and Loki (Ben Affleck and Matt Damon) from washing away their sins at a Catholic Church centennial and reentering heaven. If they do, God’s infallible word is proven…fallible; which would end all humanity and existence.

These pesky archangels act like whiny buffoons but anytime these two do ridiculous comedy, it is utter hilarity. Another film that is actually pro-religious in an anti-religious way, Dogma is about beliefs, ideals, martyrdom, and miracles. And hey, it’s still a satire. Don’t believe me? Ask George Carlin, a Cardinal who invents the “BUDDY CHRIST!!!” 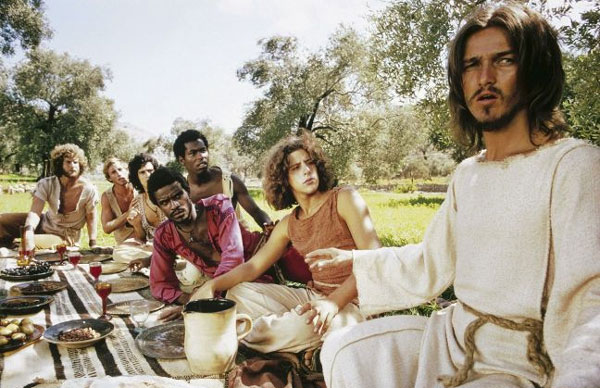 A bunch of hippies go to the desert to recreate the crucifixion of Christ through the funky-song-point-of-view of Judas Iscariot (Carl Anderson). Once you ignore the fact (or don’t) that the apostles, temple dwellers, lame/leprous beggars, and crucifixion cheerleaders are played by the same eight people (like a real play), this version of the death of Christ is super fun.

The songs are fantastic. From Herod’s lyrics, “Prove to me that you’re no fool…….Walk across my swimming pool!” to Judas resplendent in white bell bottom fringe singing, “Israel in 4 B.C. had no mass communication.” Caiaphas has the low bass voice, “No wait! We need a permanent solution to our problem.” The mystery, to this day, is at the end. The hippies, done with their musical, get back on the bus all sad and gloomy. All except……..the guy who played Jesus. 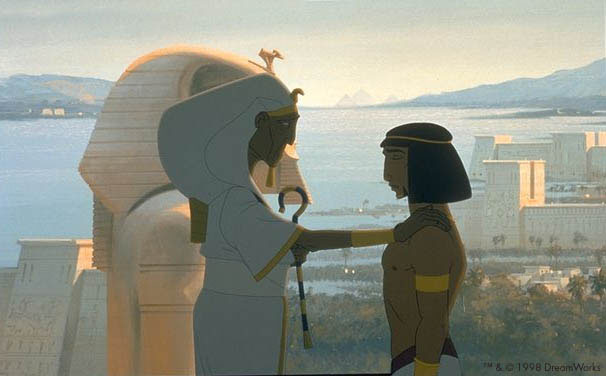 Moses (voiced by Val Kilmer) was put in a basket by his mother because the Egyptians were killing the newborn babies due to a fear of a Hebrew population surge. The basket was found by the Pharoah’s wife and Moses was raised as an Egyptian prince. When he reaches adulthood, he is reunited with his real family who open his eyes to the horrors his real people suffer at the hands of the Egyptians. Moses runs away after accidentally killing a guard, marries a nice Jewish girl, has a talk with a burning bush, and the rest…. is theology. 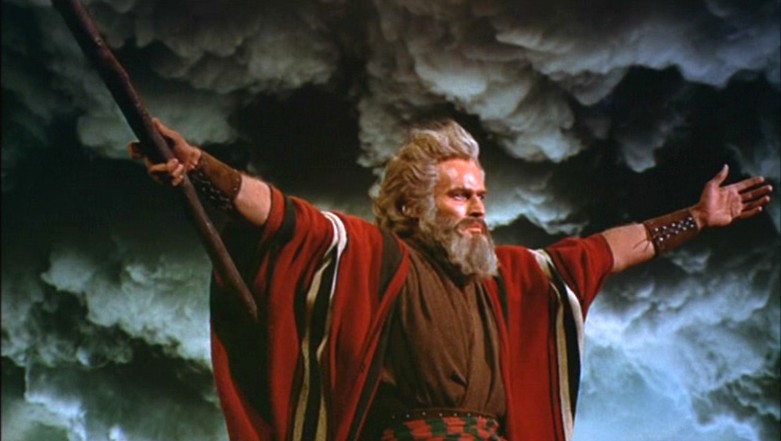 Every year, around Easter, Charlton Heston goes up the mountain and comes back with two large stones. Although more appropriate for Passover since it has nothing to do with Easter, this movie seems as traditional a telling of Moses as can be enjoyed.

Where did I leave off with Prince of Egypt? Ah yes-burning bush tells Moses to lead the Jewish people out of Egypt. He goes to Pharaoh to try to get his people freed, but Pharaoh Hardens his heart. Moses, with God’s help, sends plagues to Egypt (frogs, locusts, kill the first borm-the usual). Pharaoh finally lets them go, but relents and sends an army to chase after them. Moses parts the Red Sea for his people to pass but then it crashes down onto the soldiers. Back to the two large stone tablets. His people eventually get to their promised land, but Moses cannot. He had used pride in the name of God. 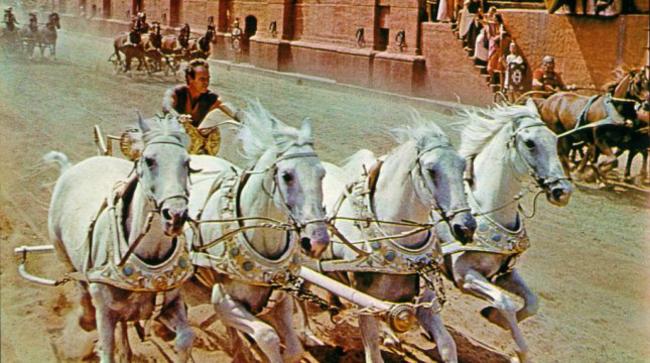 Ben Hur (Charlton Heston) is rich and Jewish. His BFF Massela is the head of a Roman command. Massela wants Ben Hur to rat on any Jews who talk crap about the Romans. Ben Hur will not. Massela imprisons Ben Hur, his mom, and his sis, and they are made slaves on trumped up charges. While a slave, he receives water from an anonymous Jesus.

The movie is Ben Hur’s story but it keeps intertwining with Jesus’s. His true love Esther hears the Sermon on the Mount. Later on, Ben-Hur tries to return the water he borrowed from Jesus but is kept away. Ben is present for the crucifixion which somehow heals his mother and sister of their leprosy. The death of Jesus also heals their family unit. You just have to love any religious movie with Charlton Heston. He just belongs there.