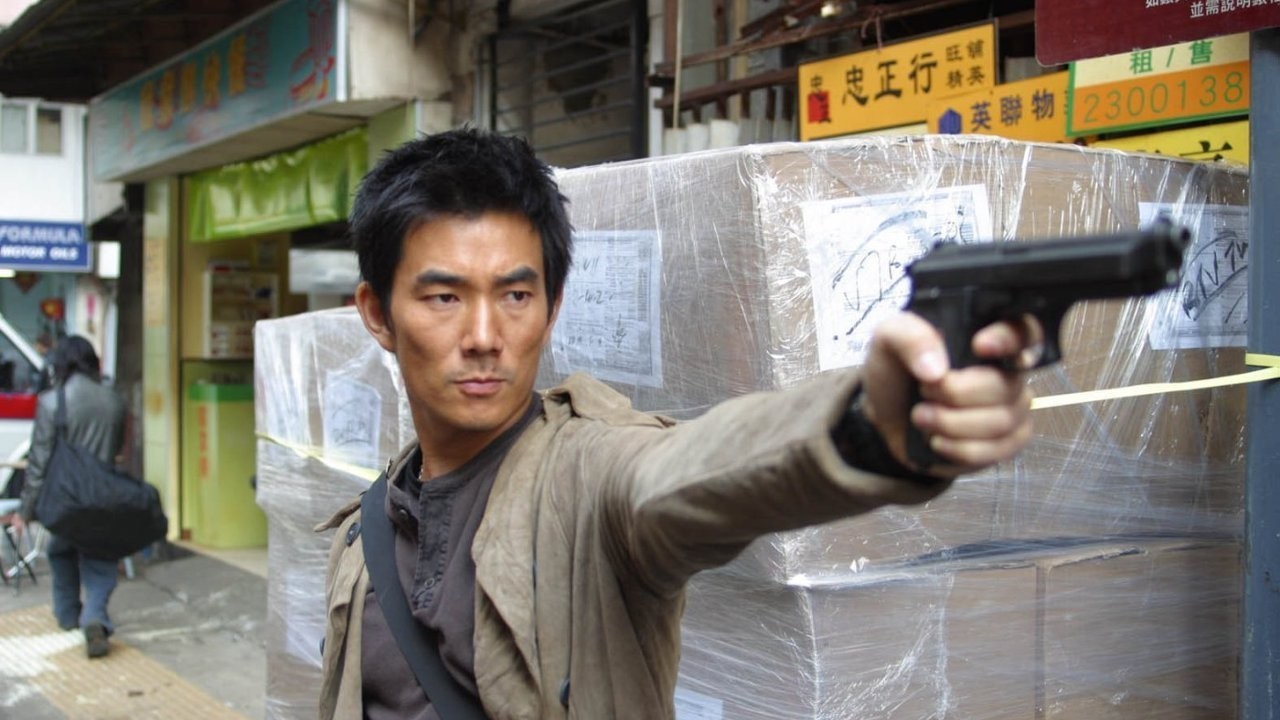 Another action packed entry on this list where the guns come out blazing is this fantastic opening shot to Breaking News from the master of Hong Kong cool gangster flicks, Johnnie To.

The shot starts out looking up into the sky and the tops of some buildings and then makes its way into a street below. We follow a guy into a building and as he takes the stairs the camera rises outside of the building and we follow what happens inside through a window as he meets up with some other guys.

The camera then goes back to street level and we are introduced to some undercover cops in a car who are clearly tailing the gang upstairs. Some street cops enter the scene unwittingly and start asking questions about a car parked in the wrong spot. At that point all hell breaks loose and we a treated to an awesome shoot-out whilst the camera keeps on swerving through the action. Once this scene is over you’re hooked and that was the whole point of it. 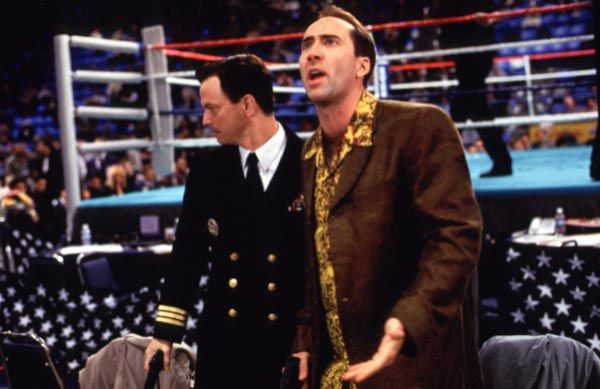 Brian de Palma could easily have had a few movies on this list as he loves one-takes and various other camera tricks. Both Carlito’s Way and Bonfire of the Vanities contain great continuous shots but Snake Eyes tops those with the longest one-take on this list so far, although it’s not really one uninterrupted take as it contains several hidden cuts which have been edited in such a manner as to appear seamless.

Starting off by showing us TV monitors covering the prelude to an important boxing match, the camera then pans away to reveal Nicolas Cage, who was just being interviewed on one of the monitors. We follow him backstage as he talks to various people and then all the way to the arena where he is met by an old buddy and where we are given a clear overview of some of the key players who are sitting ringside. The shot ends with the assassination of the Secretary of Defense, which sets the film’s plot in motion.

A truly elaborate steadicam shot as it involves a lot of movement through small and crowded spaces and literally hundreds of people on screen with at least ten people speaking parts, the opening scene of Snake Eyes is definitely the crown on de Palma’s long lasting love affair with the continuous shot. Such a shame the movie doesn’t live up to its virtuoso opening. 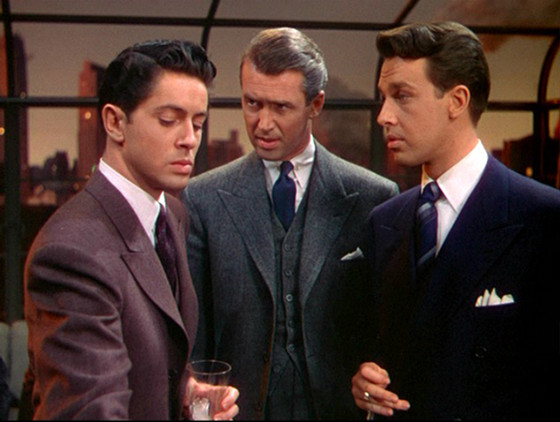 Rope is noteworthy for three reasons. Firstly, it marks Alfred Hitchcock’s first movie in colour. Secondly, it was the first of the very fruitful collaboration between Hitchcock and James Stewart. And lastly the entire movie is made up of long takes.

Hitchcock wanted to see if he could create an entire movie in one take and still build suspense effectively but unfortunately it was impossible to do this for technical reasons as the duration of a shot was limited by the length of a film reel. Consequently Hitchcock created a film which seems to suggest one long continuous take when it is in fact made up of ten long takes, most of them edited in a way to hide the cuts.

The movie clearly takes place in real time and in one location but still manages to create suspense and drama. And even though it might not be one of the master’s best movies, it is still a great little film which comes highly recommended and is the granddaddy of films with a fascination for long takes. 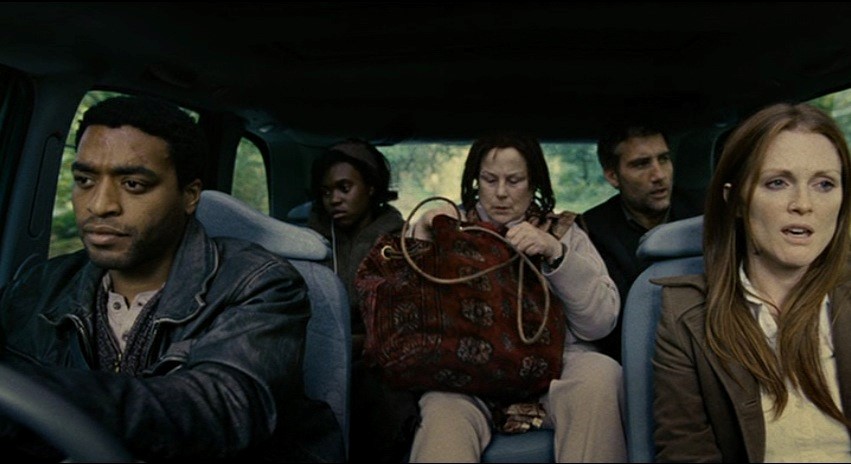 Alfonso Cuarón had already done some long takes in his previous work and would go one to push the art of the continuous shot even further later on his career with the earlier mentioned Gravity, which makes him the only director with two separate entries in this post, but Children of Men contains no less than three of them.

The most often mentioned take is the spectacular and insane car ambush scene, in which the characters are driving along a road and are ambushed by a bunch or forest dwellers. To achieve this shot a special rig was constructed inside and around the car, whilst the seats and windshield were modified so that they could be moved to get actors out of the way and the camera out through the windscreen whilst being able to turn 360 degrees. Four people were on top of the roof to control the whole contraption.

No less impressive though is a battle scene later on in the movie in which Clive Owen is captured, escapes and makes his way through a street and building, which are basically a war zone. These scenes too are not one-takes in the literal sense as effects were used to combine various shots to create the illusion of a continuous take through seamless blending. 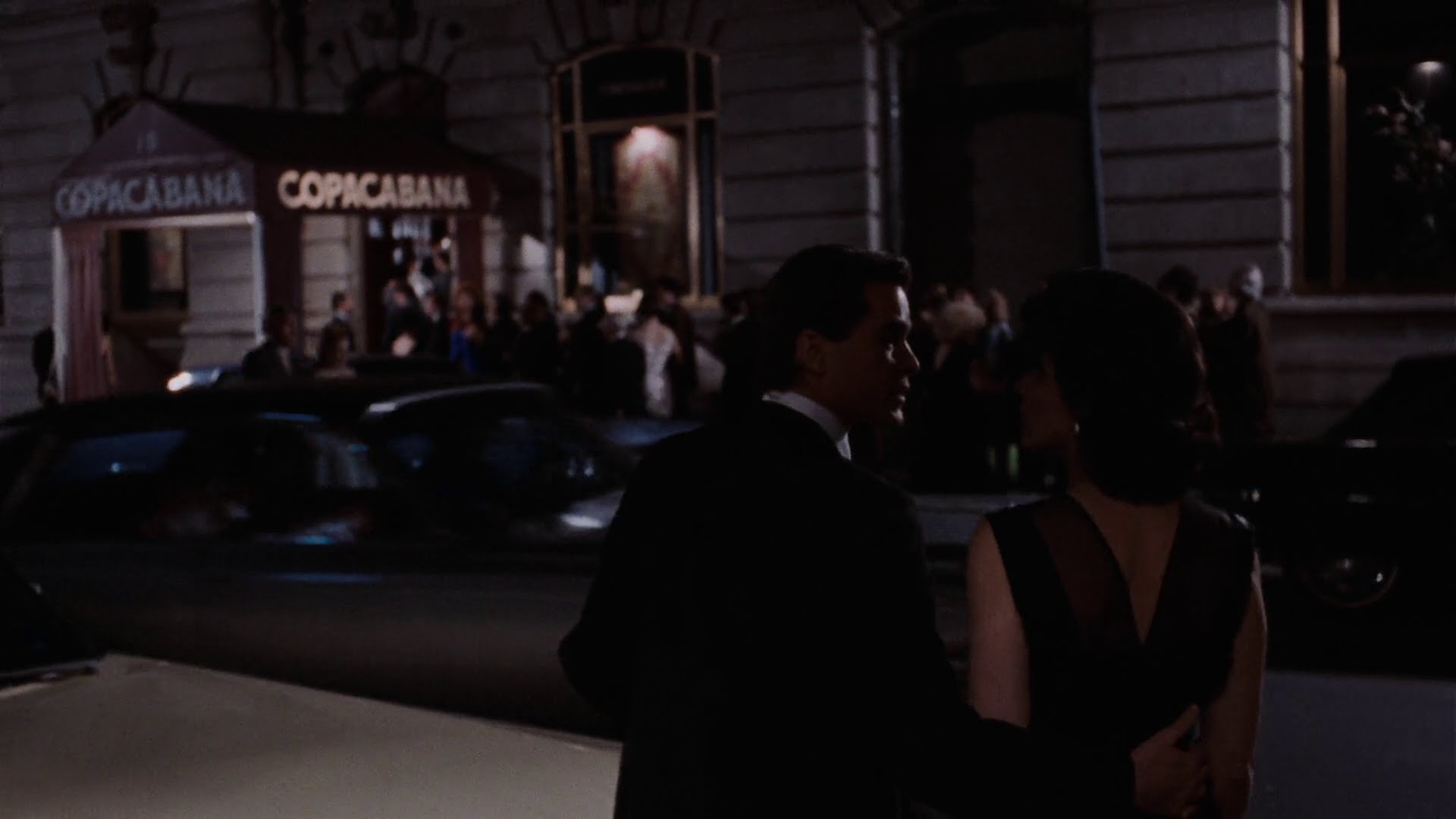 Probably the second most famous long take in movie history, from Martin Scorsese’s masterpiece Goodfellas. The shot follows Ray Liotta, at the height of his criminal power, going into a nightclub with his girlfriend and future wife, Lorraine Bracco. They take the back entrance and go through various hallways, the kitchen and out onto the floor of the club where waiters quickly set up a front row table for the couple.

The shot is a technical marvel as it moves from an outside location to narrow hallways, a busy kitchen and finally to the crowded club itself, posing all sorts of timing and lighting issues for the cinematographer. Apparently they did this one eight times before they got it right. It’s also a fantastic way to convey the power of the main character, the doors his position are opening for him and the effect this has on the girl he’s trying to impress, who will indeed marry him later on in the movie. 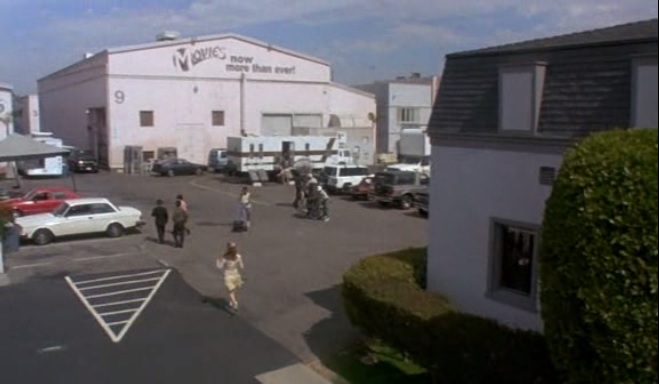 Yet another opening shot with a clear nod to Touch of Evil (which together with Rope are explicitly mentioned in the dialogue during this scene) and, as the movie itself, a clear meta-piece on the movie industry in general as well.

The shot starts out in an office, dollies back and uses a crane to swerve all through a film studio parking lot, following the daily ins and out of a studio. We see secretaries taking calls, a courier making deliveries, discussions between studio staff and studio tours taking place whilst constantly returning to the main character of Tim Robbins’ movie producer as people try to pitch him silly and clichéd ideas for movies.

Just like the opening shot in Touch of Evil, this scene introduces the main characters as well as the theme of the film. The movie is a fantastic self-referential satire of the studio system and this scene is basically doing the exact same thing in its own microcosm. Apparently they shot this scene fifteen times but eventually ended up using the third take. Go figure. 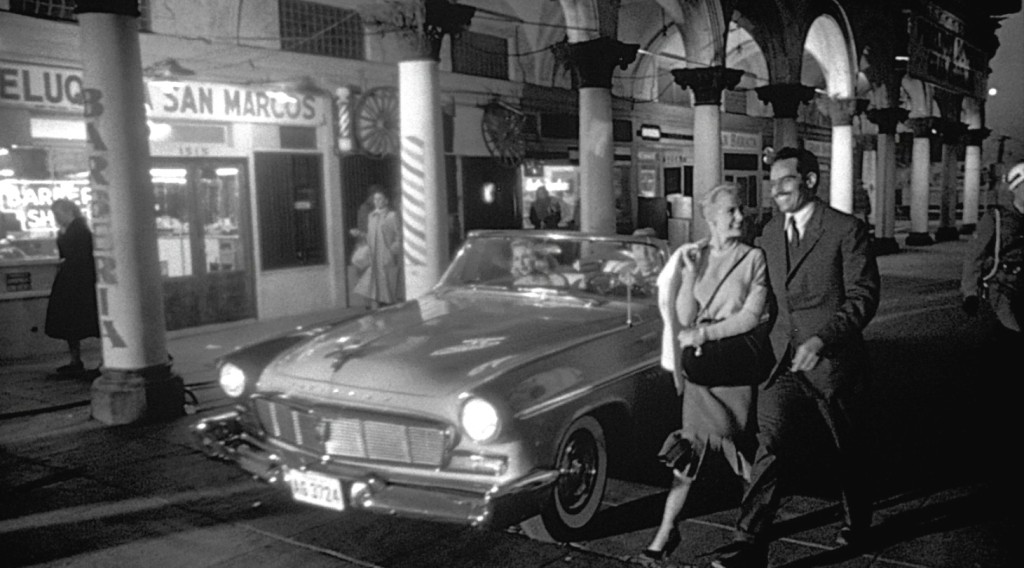 Possibly the first elaborate one-take to travel along extensively with the objects it is following, this scene set a whole new standard for the long take and consequently became an iconic piece of cinema history. The shot starts with a close up of a bomb and follows someone sneaking up to a car and planting it in the boot. Then, as the cameraman is clearly transported onto a crane, the shot continues by following that car and our lead characters as they walk down the streets of a Mexican town.

The genius of the shot lies in the complexity of what’s going on on-screen, the fact that it introduces the protagonist and sets the plot in motion whilst also sucking the viewer into the movie from the very first frame. 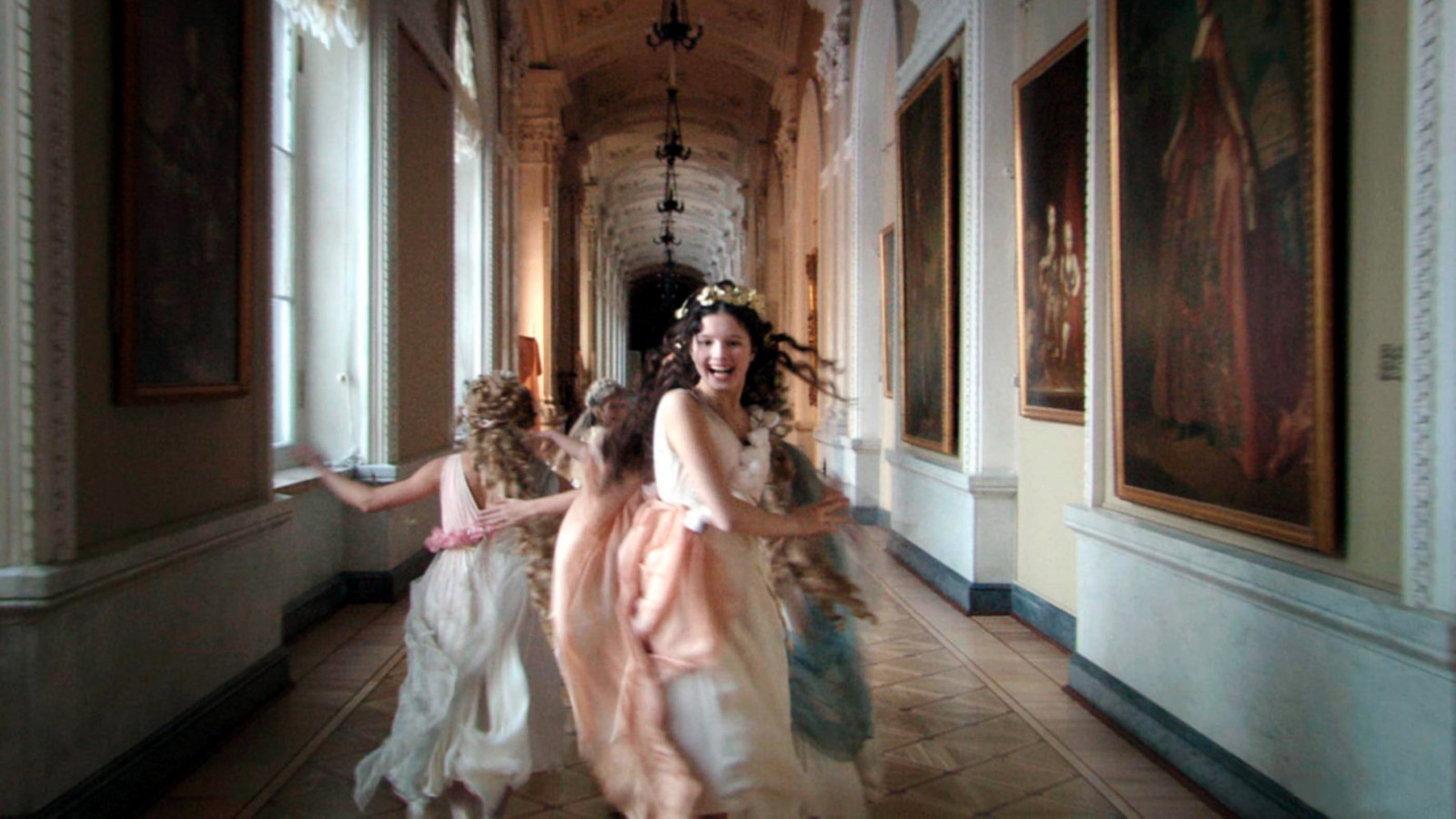 Without a doubt the longest and most elaborate one-take on this entire list is Russian Ark, a work of sheer technical genius and arguably some madness. Not content with just having one long continuous scene or a movie stitched up of various long takes, Alexander Sokurov decided to make his entire film out of one 87 minutes long continuous take.

Shot on digital video, which had been modified to record on a hard drive instead of tape to allow 100 minutes of continuous shooting, the movie covers 300 years of Russian history as the camera glides through the Winter Palace of the Hermitage Museum accompanied by a ghost-like figure who acts as our guide on what is essentially a long museum tour. The movie covers 33 rooms of the museum as well as external locations and features a cast of over 2000 actors and 3 orchestras.

It was obviously completed in one day one the 23rd of December 2001 on the third attempt to shoot it as the first two had to be aborted due to technical issues. Russian Ark surely has it faults as a narrative and exploring 300 years of history in this manner might not have been the ideal choice to cover such extensive content but the feat of orchestrating an entire movie of this scale in one-shot is simply the stuff of legend. Mind boggling.

Emilio has been a movie buff for as long as he can remember and holds a Masters Degree in Cinema Studies from the University of Amsterdam. Critical and eclectic in taste, he has been described to “love film but hate all movies”. For daily suggestions on what to watch, check out his Facebook page: https://www.facebook.com/goodmoviesuggestions.