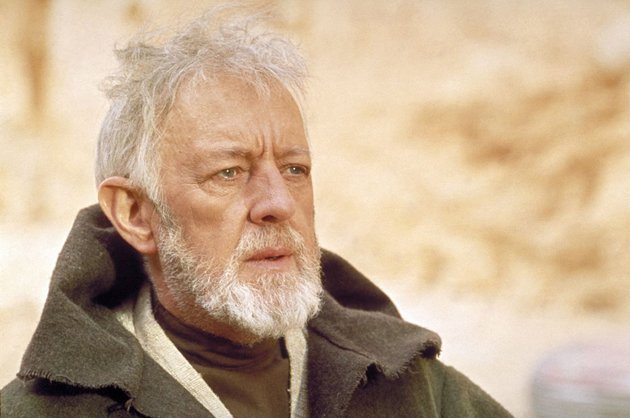 There’s another obvious reason as to why Star Wars doesn’t have many close ups; four of the main characters aren’t capable of facial expressions (Chewbacca, Darth Vader, R2D2 and C3P0). Chewbacca and R2D2 aren’t even able to communicate in English (or any other understandable language, for that matter). Regardless, through their physical gestures and un-intelligible noises they’re capable of expressing feelings and ideas. Darth Vader and C3P0 have the added benefit of having had their voices dubbed over in post-production.

These costume-bound performers added to an interesting mix. George Lucas cast two big names in Star Wars; Alec Guinness (Ben Kenobi) and Peter Cushing (Moff Tarkin). By doing so he was allowed to cast the inexperienced Carrie Fisher (Princes Leia and Mark Hamill (Luke Skywalker) and to a lesser extent, Harrison Ford (Han Solo). The difference between the performers is noticeable. When Luke and Leia are on-screen, there’s a frantic energy, and a sense of naivety and hope. Kenobi instantly relaxes the viewer. His scenes are much calmer and his words carry a greater sense of gravitas.

Star Wars detractors often accuse the film of offering little more than “eye candy”. It’s a flawed criticism; the film’s linear script and fiery sound effects make the narrative very easy to follow (even if your eyes are closed for the duration of the screening – try it). It’s as much ear candy as it is eye candy. More importantly, the music is intricate and meaningful. John Williams’ classical score infuses Star Wars with memorable themes, motifs and tropes that enhance and help to explain the story.

The effect of the orchestra cannot be overstated. The spine-tingling music is so powerful that it not only enhances the on-screen drama with rousing there, it also alters our perception of events and characters.

Star Wars is famous for the innovative way that its sound effects were created: Darth Vader’s breathing was created by recording Ben Burtt breathing through a scuba regulator; the lightsaber’s hum was the feedback from a damaged TV; Chewbacca’s voice was a mixture of a dog, a lion and a walrus.

Furthermore, Ben Burrt used sound effects in an effective way that helped to tell the story. He wanted to differentiate between how the imperial and rebel spaceships sounded. This is most obvious during the assault on the Death Star. The rebel ships sound like traditional planes, the Imperial ships have a ghostly, screechy sound. Their mere sound conveys their malevolence.

Impressive models effects are nothing new. In 1968, Douglas Trumbull wowed audiences with his hyper realistic spaceships in 2001: A Space Odyssey. Star Wars revolutionised the special effects industry however, by using a computerised motion-control system known as Dykstraflex (named after its creator, John Dykstra). This new technology motorised the camera, allowing its movements to be programmable. At the touch of a button, the camera could roll, pan, tilt, swing and even change focus. More importantly, as the cameras could now be programmed, movements could easily be repeated with precision.

The speed and flexibility of the camera position allowed for dynamic camera angles. The audience was given a roller coaster experience unlike anything that they’d ever seen before in the cinema. 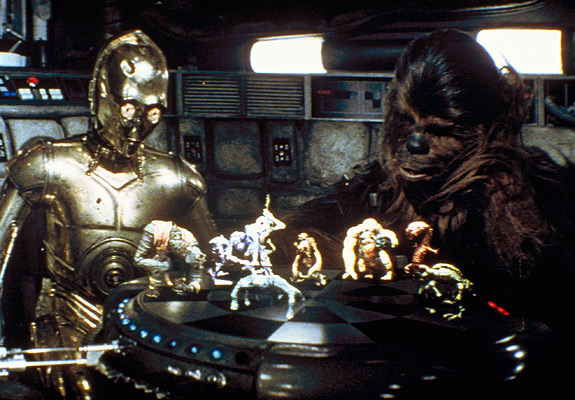 Before Alien and Bladerunner, Star Wars introduced science fiction audiences to filthy and worn out technology. Traditionally in science fiction futuristic cities, robots, and spaceships were always presented as pristine and hyper-modern. Everything in Star Wars looks old and battered. The technology itself is often reminiscent of bygones past: the weapon of choice is a sword, not a blaster; the Millennium Falcon’s gun turrets wouldn’t look out of place on a World War I bomber. Not only do these detail create a great atmosphere, George Lucas is also constantly homaging the classic adventure films that have inspired his work (like Hidden Fortress, The Dambusters etcetera).

The temptation for production designers (who supervising the construction and painting of sets), is to take great pride in their work and create something beautiful and clean. Star Wars is a great example of how the little details – scratches, smudges, dents – can create texture and history. After all, it’s not set in the future. It’s set a long time ago in a galaxy far, far away…