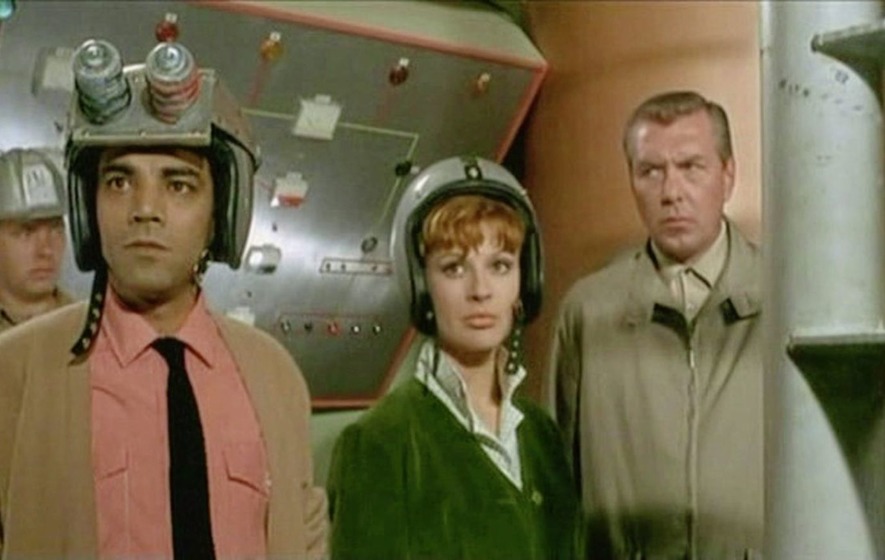 They Came from Beyond Space features American actor Robert Hutton as a GI Joe-styled scientist who is chosen to lead a team of scientists investigating a strange formation of meteorites that have landed in a field in Cornwall. So strange are these meteorites that with a simple glance at them, and with the help of some flashing lights, you’re suddenly taken over by an extraterrestrial being and are no longer in control of your mind. The meteorites and the strange hypnotic light show soon brainwash the scientists, with only Robert Hutton’s curious Dr Curtis Temple as the only person likely to save Earth from the strange intergalactic space invaders.

Produced by Milton Subotsky and Max J Rosenberg at Amicus, They Came from Beyond Space was filmed simultaneously with The Terrornauts, using the same pot of money – and it shows. The special effects, by effects wizard Les Bowie, are for the most part below average, with the space rocket flying towards the moon the only welcome exception.

Directed by Oscar-winning cinematographer and part-time horror director Freddie Francis, They Came from Beyond Space is a very enjoyable, if ridiculous, film. There is ace scientist Dr Curtis Temple, who moonlights as a commando, space measles, and a curious scene where Lee Mason (Jennifer Jayne), one of the brainwashed scientists controlled by the alien race, visits the local bank to secure a bank loan.

Influenced by similar yet much better executed Hammer films of the 1950s, They Came from Beyond Space is a half-witted sci-fi flick that is still enjoyable today, although perhaps for all the wrong reasons. 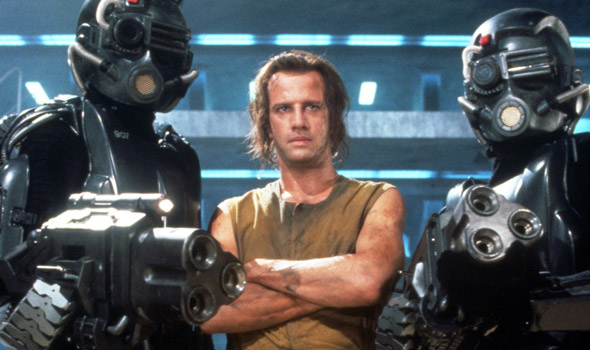 Best known for a string of cult horror films, director Stuart Gordon (Re-Animator, From Beyond, The Pit and the Pendulum) directs Fortress, a futuristic science fiction favourite from 1992. In a dystopian future, overpopulation has led to a rule that a woman can be pregnant only once in her lifetime. Stopped at a checkpoint when trying to flee the country, John Brennick (Christopher Lambert) and his wife, Karen (Loryn Locklin), who is pregnant with her second child, are sent to the Fortress, a high tech maximum security prison deep under the ground somewhere in the desert. Once behind bars, Brennick, an ex-captain in the Black Berets, pulls together a rag-tag gang of wary prisoners and plans their escape.

Fortress carries on the tropes of countless prison movies: badass cellmates, a seemingly escapable prison, and a sadistic prison warden. Staring a string of B-list cult actors, including Jeffrey Combs, Kurtwood Smith and Tom Towles, Fortress never aims its cinematic guns at the lofty heights of Blade Runner, nor does it try to match the action-packed spectacle of Total Recall. Fortress is happy enough to trundle along, offering macho heroics, gory effects, and cool sci-fi escapism. 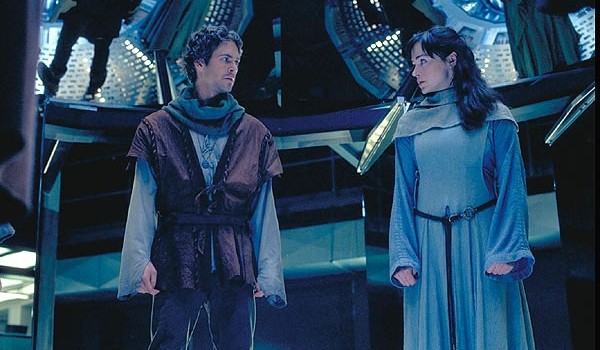 Unfortunately, when trying to send an object from New Mexico to New York, the object disappears down a wormhole, arriving in 14th century France. Worse is to come, as the corporation’s evil controller, Robert Doniger (David Thewlis), admits that the missing professor has been ‘faxed’ to 1357.

The archaeologists get into 14th-century garb, stand in a circle, scream, and seemingly time travel to 1357. The narrative bounces back and forth between the present day and the Hundred Years’ War in France as the team only has limited time to find the missing professor.

So what’s good? Well, the cast is solid; there’s Billy Connelly as the dotty professor, Paul Walker, yet to cement his career (and legacy) in the Fast and Furious franchise, an early action role for Gerard Butler, and a snarling Michael Sheen as an English lord. What’s bad? Well, the screenplay doesn’t offer anything new to the theme of time travel, and the wormhole that brings earnest archaeologists to medieval France could have been better explored. Still, the old-school swashbuckling antics of Gerard Butler’s romantic archaeologist keeps the bonkers plot ticking over, and Richard Donner, back in the director’s chair for the penultimate time, is always worth a punt. 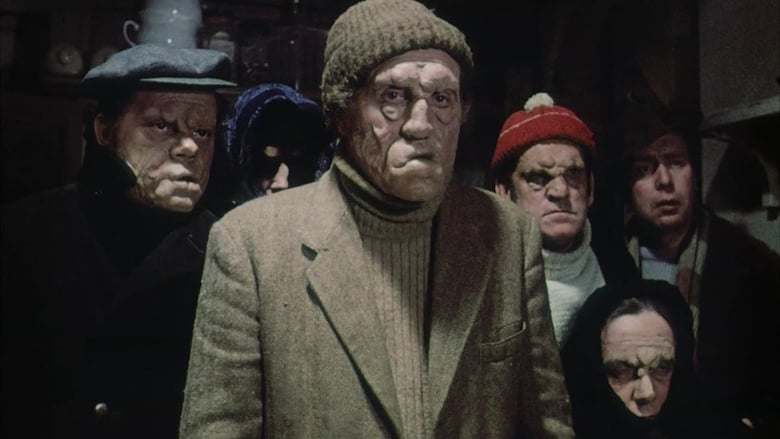 In the 1970s, British cinema was populated with successful television programmes that had been transferred to the silver screen (Dad’s Army, Steptoe and Son, Callan). When battling Hammer at the box office, Tigon British Film Productions, best remembered for their cultish horror output in the late sixties and early seventies, gave popular sci-fi programme Doomwatch the big-screen treatment in 1972.

Dr Shaw (Ian Bannen) works for Doomwatch, a fictional scientific government agency tasked with investigating and challenging ecological and environmental dangers. Travelling in a small boat, Shaw arrives at Balfe, an isolated fishing village off Cornwall, to investigate the effects on the local environment after a recent oil tanker spill.

Prefiguring The Wicker Man, Dr Shaw is an outsider exploring a closed community and discovers that the islanders eat fish contaminated by the offshore dumping of leaky drums filled with chemicals. Shaw observes the islanders’ strange, aggressive behaviour and odd appearance, the broadening of their nose and lips, and a ‘Klingon’ style brow. As the islanders hide their facial disfigurements and commit crimes, Dr Shaw, with the help of a local schoolteacher (Judy Gleeson), must convince the islanders to leave the island and save themselves. 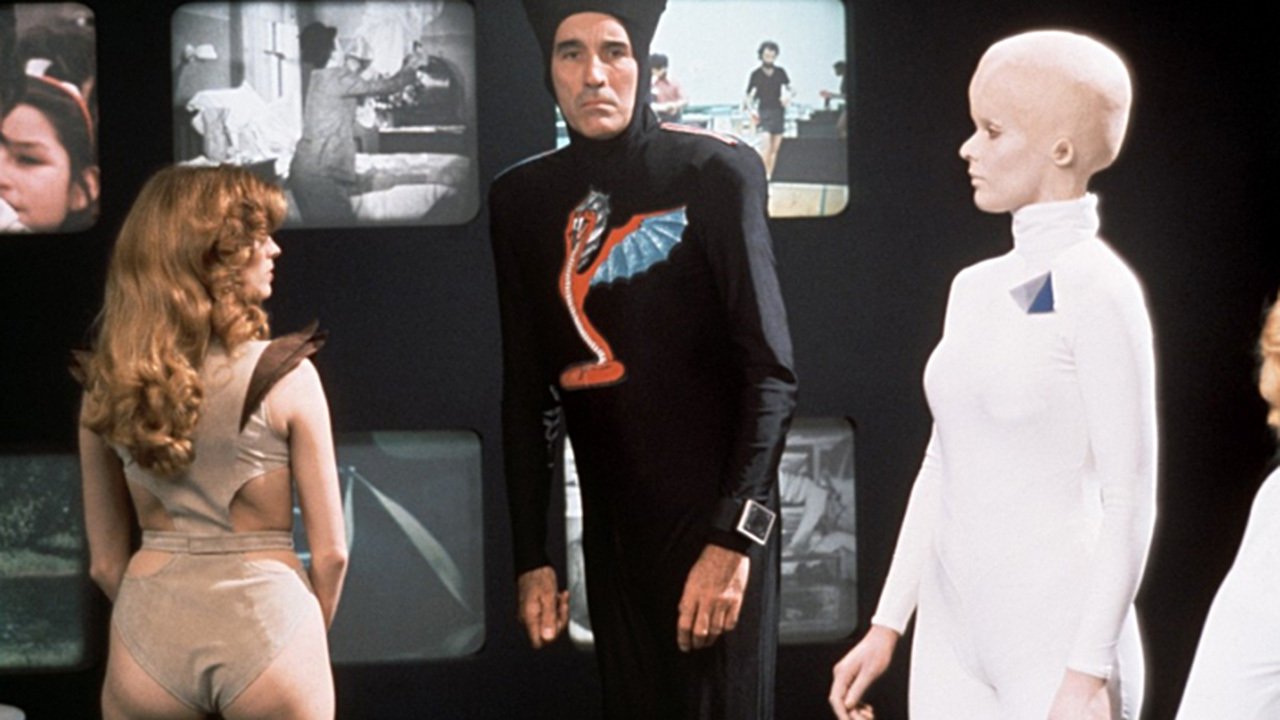 You can judge the type of film offers that ex Uncle agent Robert Vaughn and horror icon Christopher Lee may have been getting in the mail if both actors seemingly agreed to appear in Ed Hunter’s Starship Invasions in 1977. If you’re being generous, you could compare Starship Invasions to a broad mixture of It Came from Outer Space and Earth vs the Flying Saucers and other steller films of the fifties. More specifically, however, Starship Invasions finds itself in the bargain bin of Starcrash, Laserblast and other derivative sci-fi flicks, all greenlit by the success of Star Wars and Close Encounters of the Third Kind.

A groovy jazz score accompanies a journey through space as a flying saucer lands in a field in Canada and abducts a farmer. Aliens dressed in Ed Wood’s hand-me-downs from Plan 9 conduct a series of tests on the farmer before allowing the portly earthling to go free.

The main bad guy is Rameses (Christopher Lee) from the planet Alpha. Rameses and the other aliens communicate through telepathy, so we hear their dialogue in a helpful voiceover. Unfortunately, as Lee doesn’t speak a word and spends his entire screen time staring into the middle distance, the result leaves the gifted actor looking like he has a migraine.

All in all, Starship Invasions does have some fun; there are “epic” space battles, a hidden pyramid in the ocean, and some egg-headed aliens. Robert Vaughn pops up as Alan Duncan, an expert on UFOs, looking suitably bored. As a UFO expert, Vaughn’s Alan Duncan joins forces with a race of goody-two-shoe aliens to help save the planet, as Rameses and the other Alphanians plan to conquer and colonise Earth.