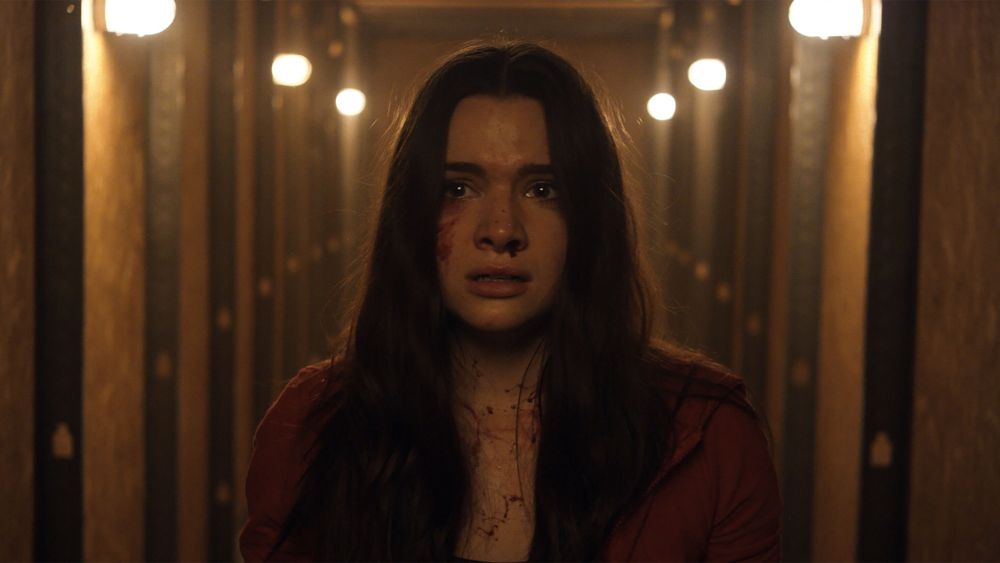 Directed by the writers of “A Quiet Place” and produced by Eli Roth, “Haunt” is set on Halloween night and follows a group of friends that get trapped in an “extreme haunted house” attraction. What starts as a harmless scary ride turns out to be deadly serious and the four friends find themselves fighting for their life in this “Hell House LLC” meets “Saw” kind of movie.

Well directed, tense and entertaining all the way through, with great sound design and good performances from its cast of virtually unknown actors, “Haunt” is one of the biggest surprises and most underrated horror films of 2019. If you are the kind of person who loves the scary rides when going to an amusement park, this unpretentious slasher is the perfect film to watch.

4. Ready Or Not (dir. Matt Bettinelli-Olpin and Tyler Gillett)

The most recent film on this list, “Ready Or Not” is a horror-comedy which no one anticipated, but which turned out to be one of the year’s most pleasant surprises.

Directed by Matt Bettinelli-Olpin and Tyler Gillett (both of them produced the 2016 horror anthology “Southbound”), “Ready or Not” takes place on the wedding night of Alex and Grace Le Domas (Mark O’Brien and Samara Weaving). But the eccentric and wealthy Le Domas family has a long tradition which consists of playing a game each time there is a new addition to their family. At first, Grace believes that the game is just harmless fun, but it turns out that her new family is serious about it and what starts as a game of hide and seek soon turns into a violent fight for survival.

Critics compared the film to “Get Out”, but unlike Jordan Peele’s film, “Ready or Not” was not a hit. This is unfortunate, for “Ready or Not” is entertaining, darkly funny, twisty and way better than it had any right to be.

Jordan Peele’s follow-up to the successful “Get Out” is another horror movie with underlying layers of social commentary. “Us” stars Lupita Nyong’o and Winston Duke as Adelaide and Gabe Wilson, two parents who are on holiday with their young boy and girl, staying at their lake house in Santa Cruz. On a night, a strange thing happens: four intruders dressed in red appear in the Wilsons’ driveway and, to make things spookier, they look exactly like them.

Playing out like a bloodier version of Michael Haneke’s “Funny Games”, “Us” once again proves Jordan Peele’s knack for creating original stories. He takes the home invasion horror cliché and comes up with a brilliant idea: what if the villains are alter-egos of the victims? After all, as the saying goes, our biggest enemy is ourselves. This clever twist and a few other surprises along the way make “Us” one of the most inventive and entertaining horror films of the year.

Directed by Robert Eggers, whose debut film “The Witch” (2015) was a critical success and one of the best horror films of the 2010s, “The Lighthouse” revolves around two lighthouse keepers from the 1890s (played by Robert Pattinson and William Dafoe) who live alone on a remote island. When after a storm they find themselves stuck together in the middle of nowhere, surrounded by alcohol, pouring rain, screeching seagulls and mysterious appearances, the two men slowly start to lose their sanity.

Reminiscent of “The Shining”, this is a slow-burn cabin fever type of horror film. Instead of the all-too-familiar jumpscares and gore, “The Lighthouse” builds its atmosphere of dread with a maddening soundtrack, menacing visuals, indecipherable mythos, and last but not least, the two ferocious performances from Pattinson and Dafoe.

“The Lighthouse” is also one of the best-looking films of the year and an ode to the cinema of the 1930s. The film was shot on black and white 35mm film in the nearly square Academy aspect ratio and it looks as if it was filmed in the early days of cinema by pioneers such as Fritz Lang and G.W. Pabst. The unique cinematography combined with the powerhouse performances from its two leads and the masterful direction and hallucinatory script from Eggers place “The Lighthouse” as the best horror movie of 2019 and one of the biggest cinematographic achievements of the last decade.