Directed and co-written by Sergio Corbucci, The Great Silence is a dark spaghetti western set in the town of Snow Hill, Utah. The town’s been hit with a severe blizzard, and snow blankets the countryside, forcing beggars to steal and townsfolk to do what they must to survive. A woman’s husband is murdered by the bounty hunter, “Loco” (Klaus Kinski), for the price of $1000.

Now she wants revenge and hires a mute gunman who goes by “Silence,” to take it on her behalf. He’s the quickest draw in town, and only shoots in self-defense – but has a way of provoking his enemies into battle. His hatred for bounty-hunters stems from a childhood memory of seeing his parents slain for a small price placed on their heads. To keep him from talking, the hunters slit his throat preventing him from ever speaking again. Revenge is already on his mind as he travels the West taking down bounty-hunters in his path.

The movie was shot in Italy’s Dolemites and the snowy mountains provide the perfect backdrop to the dreary situation facing the people of Snow Hill. Violence, greed, and corruption run amok in this film and the good guys don’t always win. The film hadn’t been made available in the US until the 21st century.

Tarantino’s love for The Great Silence (and Corbucci in general) is indisputably clear from watching Tarantino’s films. The violence, vile characters, and revenge plot are among the usual tropes in his movies. The Hateful Eight in particular borrows the snow-enveloped landscape, and Ennio Morricone (Corbucci’s go-to composer) for the soundtrack. 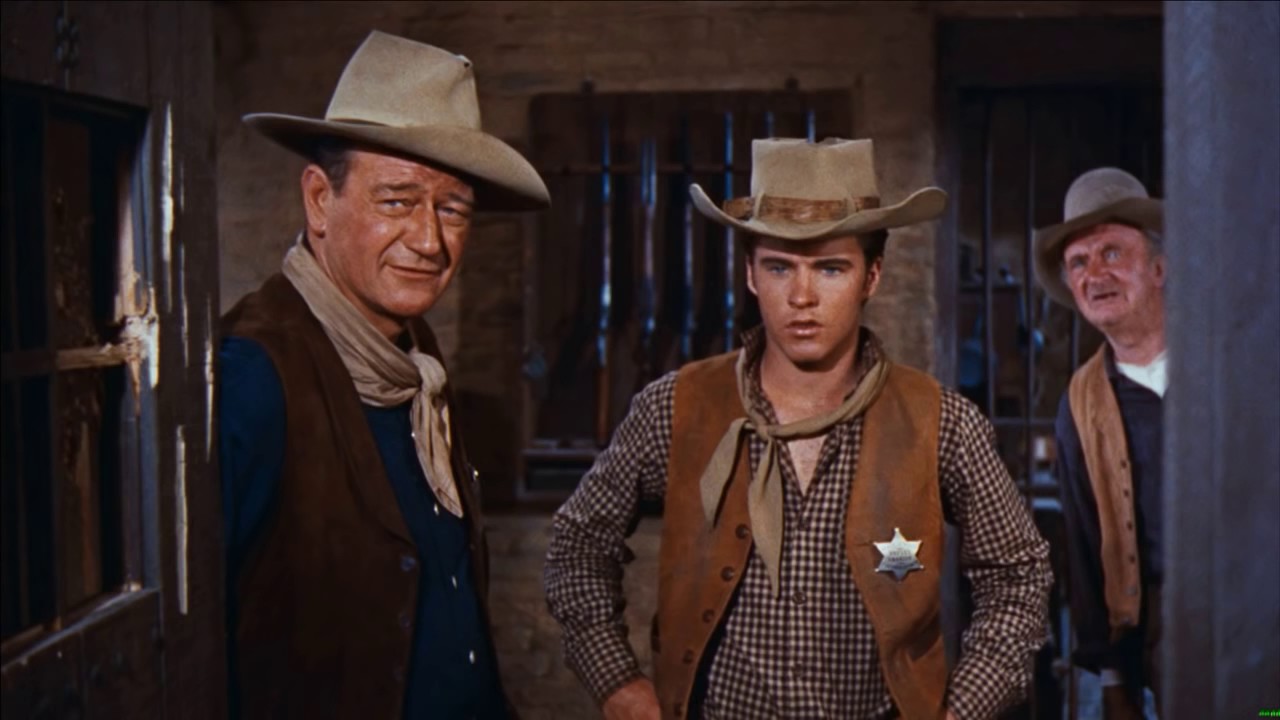 The Howard Hawks classic features a star-studded cast including John Wayne, Dean Martin, Ricky Nelson and Angie Dickinson. Based on a short story of the same name by B.H. McCampbell, Rio Bravo is about a sheriff in Rio Bravo, Texas who seeks the help of a cripple, a drunk and a gunman to fend off a gang of hired guns sent in to break a prisoner out of jail. Sheriff John T. Chance arrested Joe Burdette for murdering an unarmed man, but Joe’s brother Nathan owns most of the country and has unlimited resources – he will not have his brother rotting away in a prison cell.

Listed as one of his favorite films on several Tarantino movie lists, he dubbed Rio Bravo one of the greatest “hangout movies” – a movie he watched for the first time when he was only five years old with his great grandmother. By hangout movie, he explained at the 2007 Cannes Film Festival, he meant a movie where you become friends with the characters because of how much time you spend hanging out with them. The movies tend to be long, and by the end you feel a bond with the characters. Tarantino attempts his own “hangout movie” with Jackie Brown. Viewers spend a lot of time with characters in scenes where they’re simply conversing for extended periods of time.

Another Sergio Corbucci classic, Navajo Joe stars Burt Reynolds as a Native American avenging his tribe after seeing them slaughtered by bandits. From the start, the film was plagued by misunderstandings – Corbucci thought Marlon Brando was going to star, and Burt Reynolds thought the movie was going to be directed by Sergio Leone. Reynolds had often commented on how much he hated the film and felt it was his most unprofessional work.

Despite Reynolds distaste for it, Tarantino included it in his list of favorite Spaghetti Westerns, and even borrowed from the Ennio Moricone soundtrack. He used the songs, “A Silhouette of Doom,” and “The Demise of Barbara/The Return of Joe,” in Kill Bill.

9. Once Upon A Time In The West

A tale of greed, vengeance, and survival, Once Upon A Time In The West is a classic Spaghetti Western directed by Sergio Leone and based on a story by Dario Argento (Suspiria, Tenebre, The Bird With The Crystal Plumage). Railroad tycoon Morton sends hired gun Frank (Henry Fonda in an unusual role as a villain) to Brett McBain’s property where he and his men murder McBain and his family.

The property is one of few places in the desert with a water supply and Morton wants it. But McBain’s widow makes her arrival and inherits the land – initiating a struggle for the profitable area known as Sweetwater. Out of nowhere mysterious gunman, Harmonica (Charles Bronson) shows up with a vendetta of his own. He and a bandit named Cheyenne protect McBain’s widow from Frank.

Amazing wide shots contrasted with extreme close-ups, tension filled silence contrasted with Ennio Moriccone’s daunting score, and intense violence (mental and physical) make for a powerful film. He also borrows the name for his most recent film Once Upon A Time In Hollywood.

The final film in Sergio Leone’s Dollars Trilogy, The Good, The Bad and The Ugly pits three men against each other in a battle to find gold hidden in a cemetery. Clint Eastwood reprises his role as “The Man With No Name,” or “The Good” (or as Tuco calls him, “Blondie),” Lee Van Cleef plays “Angel Eyes,” or “The Bad,” and Eli Wallach is Tuco, or “The Ugly.” The Good knows the name on the gravestone, and The Ugly knows the location of the cemetery, forcing them to make some compromises as they battle through the chaos and destruction of the Civil War. The Bad forces the name of the cemetery out of The Ugly and is also competing for the gold. The movie ends in an intense three-way shoot-out.

Tarantino’s love of The Good, The Bad, and The Ugly – and for the team of Sergio Leone and Ennio Morricone – is no secret. He often lists it as one of his favorite movies, and it made the top spot on his top 20 spaghetti western films of all time for The Spaghetti Western Database (SWDB).

Tarantino finally worked with Morricone as his composer for The Hateful Eight. But he’s used many of the composer’s tracks in previous films including Kill Bill, Inglorious Basterds, and Django Unchained.