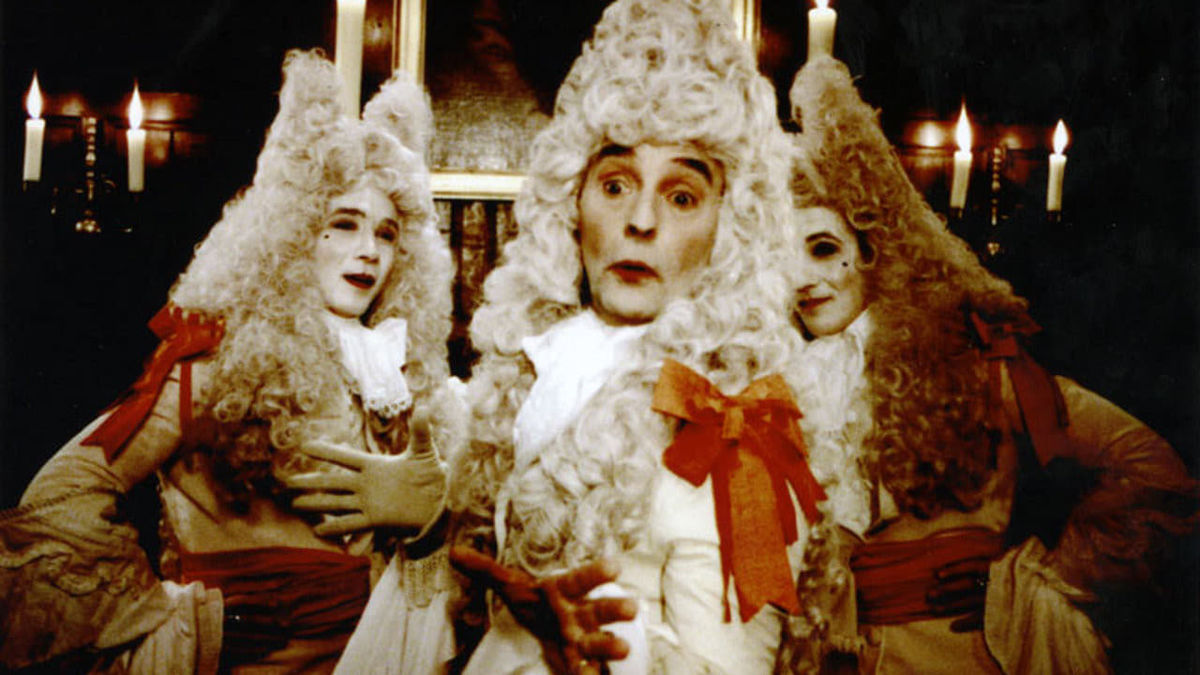 Probably the most unconventional detective film on the list, 1982’s The Draughtsman’s Contract is a 17th century English period drama described by director Peter Greenaway as an “Agatha Christie countryhouse mystery”.

The film title refers to the contract of the artist-protagonist Mr. Neville, and his contract for twelve – later unluckily amended to thirteen – illustrations of the estate of aristocrat Mrs. Virginia Herbert for the sake of her absent husband. The film is structured around the composition of these drawings, the process of which is explored in the extended inserts of Neville’s composition. (Wherein Neville’s gloved drawing hand is portrayed by director Greenaway classically trained as a painter.)

Neville is a master of his craft and as such ‘draws what he sees, not what he knows’. But when Mr. Herbert turns up dead the fidelity of Neville’s drawings turn against him, as he has – much as the photographer of Blow-Up – unwittingly captured in them evidence of a conspiracy to murder as unconsciously as would a camera. Neville is not the detective in this film, and has captured evidence without any knowledge of the conspiracy, but this does not convince the dead man’s family in search of a perpetrator who see the clues hidden within his paintings as a kind of gloating, and evidence of his guilt. 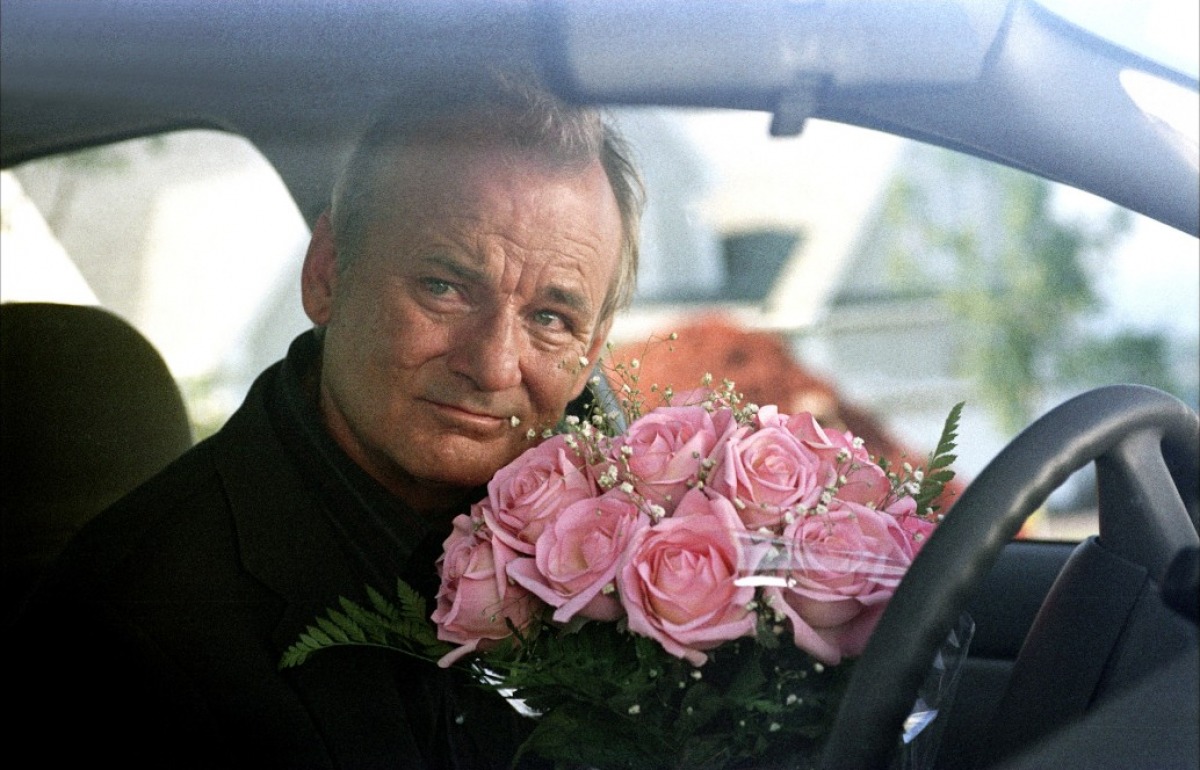 Jim Jarmusch’s 2005 comedy-drama Broken Flowers stars Bill Murray as an “over the hill Don Juan” named Don Johnson (the aptness of which is repeatedly remarked upon) as his latest girlfriend Sherry (Julie Deply) leaves him the same morning an unsigned letter arrives at his door in a pink envelope informing him he has a 19-year old son. At the behest of his armchair-detective neighbor Winston (Jeffrey Wright) Don sets off on the road with a list of 5 potential mothers (19 years doesn’t exactly narrow it down for Don) in hopes of finding the son he never knew he had.

Appropriating the simple logic of the mystery fiction he loves, Winston instructs Don to watch for clues in a pink color coding and to bring pink flowers to each of the women. And through a front of reluctance Don takes the search to heart, finding along the encounters with each of his exes objects in envelope-pink, leading him at last to a piece of pink flagger that seems to single out his son. But is it the logic of absurd fantasy or does Don Johnson’s world obey some law of synchronicity, some magic of meaningful coincidence? And what’s to be made of his ex’s dog Winston? Could the whole thing be a setup?

Ivan Passer’s 1981 film Cutter’s Way is the story of two men embroiled in the investigation of a young woman’s murder after key witness Richard Bone (Jeff Bridges) is made the prime suspect. Finding his car stalled in a back alley late one rainy night in Santa Barbara Bone sees the dumping of a dead girl’s body. Later, at a Founder’s Day parade with his best friend Alex Cutter, (John Heard) an alcoholic Vietnam war vet and double amputee points out a local oil baron J. J. Cord (Stephen Eliot) as who he saw in the alleyway.

But J. J. has an alibi, and Bone, realizing he had been at the same hotel as J. J. the night of the murder drops it, accepting the man’s innocence. But Cutter won’t let Cord go that easy. Cutter thinks Bone has an aversion to responsibility. And once the victim’s sister Valerie Duran (Anne Dusenberry) shows up, Cutter’s monomaniacal pursuit of J. J. Cord takes off with a blackmailing and entrapment scheme.

Even as Cutter and Valerie gather circumstantial evidence Bone is never convinced of Cord’s guilt. He knows for Cutter it is personal, Cutter sees Cord as the sort of society man who sent Alex to war, who is always putting someone else’s ass on the line for his own profit – and taking him down for Cutter is a matter of revenge, justice, and pride.

But under the gun as Cutter’s scheming picks up, Bone has to decide – in the absence of evidence – which side of reality he wants to be on. 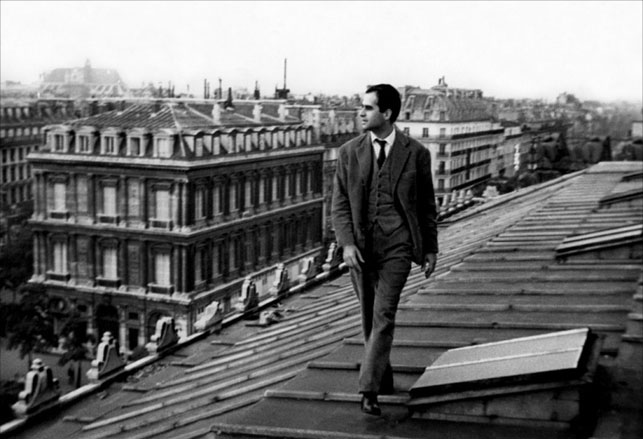 In Jacques Rivette’s 1961 debut Paris Belongs To Us literature student Anne (Betty Schneider) finds herself caught in a web of intrigue following the suicide of her older brother Pierre’s (François Maistre) friend Juan, a Spanish musician involved a production of Shakespeare’s fragmentary Pericles which has reverberations through a group of expatriate bohemians, among which the suicide is believed murder at the hands of a group likely to strike again.

As Anne descends into this shadow world of espionage and whispers of apocalypse she abandons her studies for a role in Pericles – which itself seems somehow involved in the game of life and death – and joins the expatriate’s collective spiral into madness and cloak and dagger war with a conspiratorial entity invisible and omnipotent. The atmosphere of French resistance lingers in the fear of fascist spies, accusations of collaboration, and the way the expats conduct themselves like a paramilitary intelligence.

But even as the deaths continue the whole mythology of conspiracy, the murders, even the opposition itself begins to seem like part of a self-fulfilling prophecy on the part of the expatriates – a revelation that fiction believed brings itself into reality – that the detective is not merely uncovering conspiracy but creating one.

David Robert Mitchell’s 2018 comedy-mystery Under The Silver Lake is an anti-detective film for the era of Flat Earth, Weinstein, and Pizzagate.

Sam (Andrew Garfield) is a jobless stoner in the affluent Silver Lake district of LA unable to pay his rent and apathetically awaiting eviction. He passes the time spying on his regularly topless neighbor, getting high, and trying to decipher secret messages he believes are hidden in ‘The Wheel of Fortune’. After quickly falling for his new neighbor Sarah (Riley Keough) only to have her as quickly disappear, Sam sets off to find her on a journey that leads him deeper and deeper into a subterranean LA of celebrity fetishism, sex trafficking, subliminal mind control, and occult ego worship – all of which seems to have something to do with the assassination of business mogul Jefferson Sevence (Chris Gann), a serial killer of dogs, an owl headed succubus, someone named The Hobo King, and of course Sarah’s disappearance.

But isn’t it all too convenient? The whole of the establishment Sam could never find his way into conspiring against him to take the girl of his dreams? With a trail of clues left where but the very pop culture ephemera he is obsessed with?

Under The Silver Lake is the anti-detective for a culture of media worship where customers are sold identities and world views, where passive consumers are hooked on dopamine loops and manufactured hype, a world in which the same machine that sells young women into sexual exploitation sells an ineffectual counterculture of market-tested rebels. And at the same time reveals the perversity of a world with easy access to enough cultural material for one to create themselves whatever bias confirming reality they’d like and become lost in fantasy completely. The parallel is not lost between Sam’s excessive theorizing and compulsive masturbation.