“High Life” follows in the tradition of astronauts being used by a corrupt power industry to partake in a deep space mission, ala “Alien” just to name one example. Robert Pattinson is an actor who got dealt a bad hand for many years with the “Twilight” saga, but it’s great to see he’s moved on from it and is now experimenting with bold decisions. This is a film that is bent of true science fiction where ideas and metaphors take the center stage in its grand vision. No laser shootouts or talks of the force, just people deep in the abyss of the universe searching for meaning. But when it gets going, it never hold back.

This is a pretty hard R movie that earns its divisive reaction. Any sci-fi film that chooses to tell itself the way this does is bound to be compared to the likes of “2001” or “Solyaris”, and don’t get the wrong idea this film isn’t on that level at all. But it earns its place to be compared, we search for meaning in “High Life” the same way a father and daughter search for meaning in the abandoned wasteland that is space.

Don’t let the title fool you, this has nothing to do with the American stage play of the same name. Bi Gan has only directed two films, this being his second, but this young 30-year old has shown the ambition of a stunning future filmmaker to keep an eye on. We follow Luo Hongwu (Huang Jue) as he returns to his hometown, years after he had run away in his youth. He’s there for his father’s funeral but starts taking a trip down memory lane, reminiscing on his former love and life. Luo once had a friend who tragically died, and was in love with a woman he’s now lost.

The film is in a dreamlike haze from start to finish. The first act transitions between fantasy and reality as Luo recalls memories of his past with his friend and his love. He walks to a new place and starts to remember his previous life in his youth with the woman of his dreams, but his memory is so hazy that we can never be sure if anything he recollects is true.

The second half of the film has been talked about in great detail for it’s remarkable use of a one hour tracking shot that goes uninterrupted – not to mention the fact that the film’s final hour is in 3D. I of course saw this in my home, so I didn’t experience the 3D of it, but I can only imagine it was something to behold. It’s not just the talent of putting such a feat together, which according to behind the scenes took 2 months of set-up and preparation. But because we know what it means for the story, how Luo is going into a journey with blind devotion.

8. Memory: The Origins of Alien 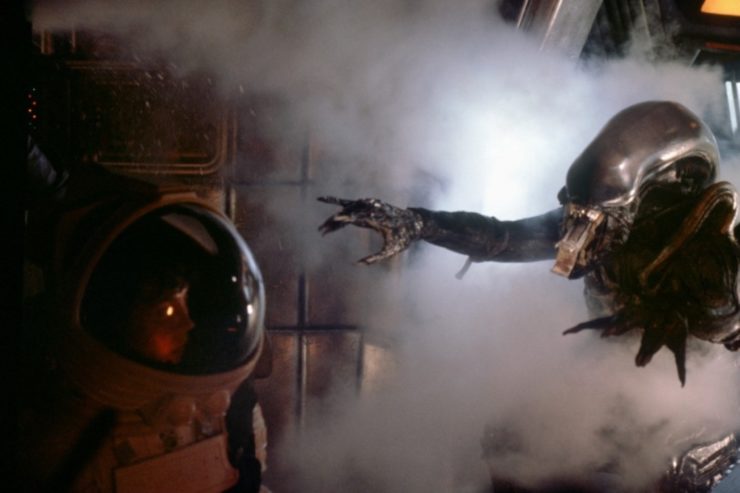 A few years ago we saw the release of the documentary “Room 237” which chronicled viewers’ interpretation of Stanley Kubrick’s “The Shining”. A documentary of that kind is something that can be fascinating for every film just to illustrate the various meanings films can have on people, even though the film itself never changes. “Memory: The Origins of Alien” is something pretty similar. Detailing the history of what went into making Ridley Scott’s “Alien” in 1979.

This isn’t a film about how the film was made necessarily. It’s about why they made it the way they did in the first place. We track through the social-political world in the 1970’s, sci-fi influences that paved the way for this film to be made, and a long history of mythology that inspired the dark realms the idea of the xenomorph’s history. The idea is that somewhere a memory was planted in someone’s mind that ended up being a seed that spread throughout and manifested itself in the creation we see before us.

The story of a violent man who learns remorse is one that has been done to death. But very few films are able to accomplish it in the manner in which “The Mustang” accomplishes it. Roman Coleman (Matthias Schoenaerts) is a convict serving his sentence for domestic violence he committed over a decade ago. He’s a violent man in a different way, his bursts of anger only come in selective moments after so much of his time is spent in confinement. He’s alone to himself much of the time and has no emotional connection to anyone or anything, which only seems to exacerbate his icy cold demeanor.

Schoenaerts acts with a lot of restrained turmoil, he has no patience due to being locked away for so long. So when he finally gets his opportunities to snap, he takes it. Through a program “Outdoor Maintenance” puts Roman in contact with a wild stallion that needs to be trained. We learn through the opening credits that there are “100,000 mustangs in the wild across 10 American states and the government can support less than a third of them only. The rest are sometimes adopted, sometimes kept from sight in various long-term facilities or given to prison inmates to train and then sell at auctions through rehabilitation programs.” The final act really becomes something special to watch as the film wraps up its story of an unruly man and a misunderstood animal.

“Under the Silver Lake” is a film that I don’t know if any review or write-up can do justice. Not because it’s so great that one can’t find the words, but because any way you try to explain this won’t do any good. It’s a film that feels ambitious, but never goes too far with its self-indulgence. So weird, but not quite a ‘stoner’ type of trip. But overall, I would say it doesn’t give a damn. It goes out, tells the bizarre story of a man who finds a lady swimming in his apartment’s swimming pool and sets off on a journey through LA to find her only to find something else and leaves it at that.

It was directed by David Robert Mitchell, who also directed “It Follows”, with music done by Disasterpiece, who also did music for the same film. It has a similar feel you saw in there where music and sound play an integral role in the telling of this weird mystery. Its colors and vibrancy are all to hazy and blended together to create a kaleidoscope style that separates it from other mysteries of its kind. Being set in LA and weaving through the places and scenarios it does gives the film a unique context of celebrity and fame, almost something akin to “Mulholland Drive” or “Maps to the Stars”. Not to mention, Andrew Garfield continues to show his great work as an actor. I’m not going to say this is a new step in the Film-Noir genre, but it might be insight to a different way of approaching it.