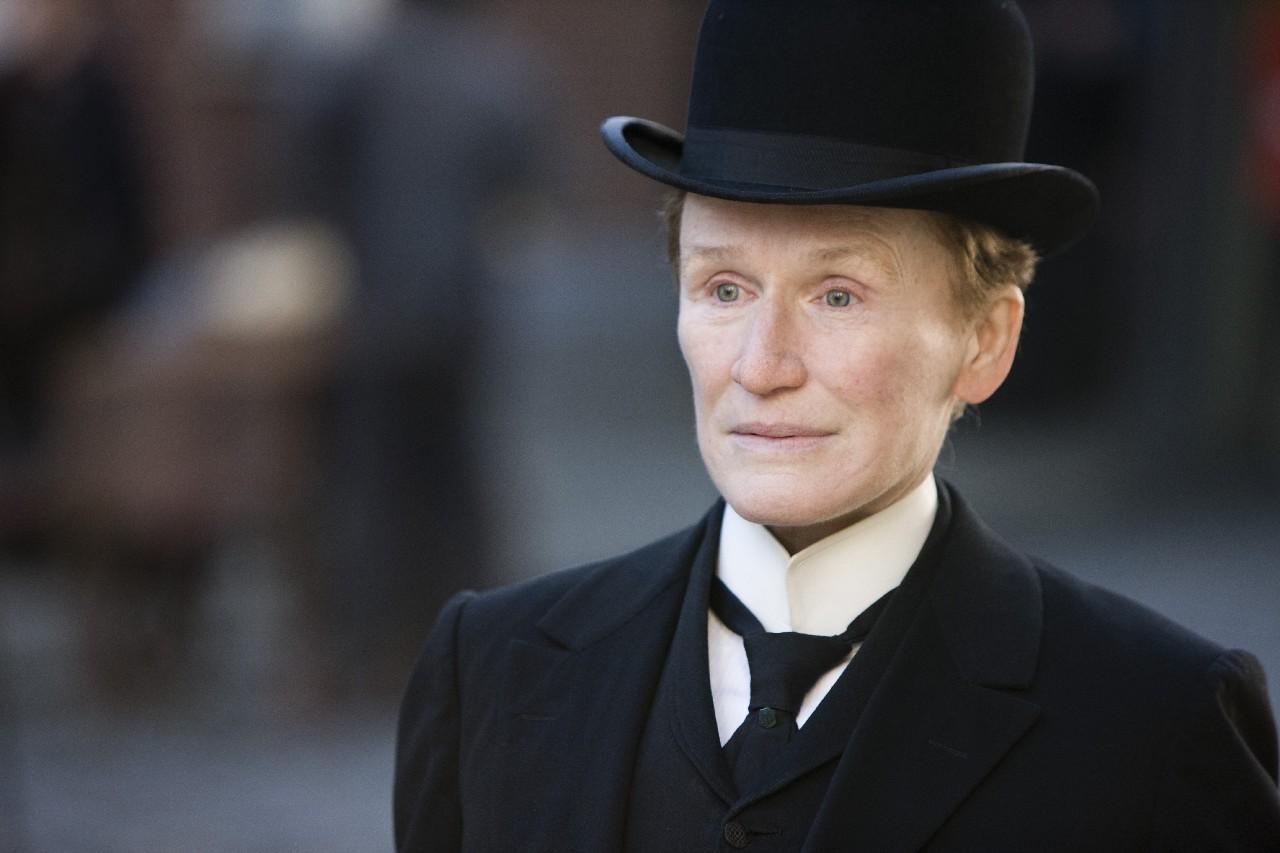 Even though she got five Oscar nominations in the 1980s, Close failed to receive any in the ‘90s and she somewhat turned out to be more of a better known theatre and TV actress for a while. Of course, it was fun to see her in “Mars Attacks” and/or “Air Force One,” but she deserved better roles than those.

Another nomination didn’t seem on the radar for a while, which is why “Albert Nobbs” came as a surprise, earning her yet another nomination for portraying a woman who had to pose as a man to work as a butler in a very elegant hotel in Dublin. Now that makeup work and “transformative” works can easily be manipulative, one could confuse the idea of great acting with the changing of image.

That’s not the case with Close. Even though the film itself doesn’t have a strong plot, Close’s performance elevates the material considerably and makes the whole thing more intriguing.

It’s a very human performance; you won’t find anything hammy about it and even though on paper it sounds like obvious bait, Close avoids unnecessarily over-the-top techniques that would impress awards voters. Since she makes her character so real, you can’t help but feel for Albert, and despite the slightly dull tone of the film, the film still moves you thanks to hers and Janet McTeer’s performances. 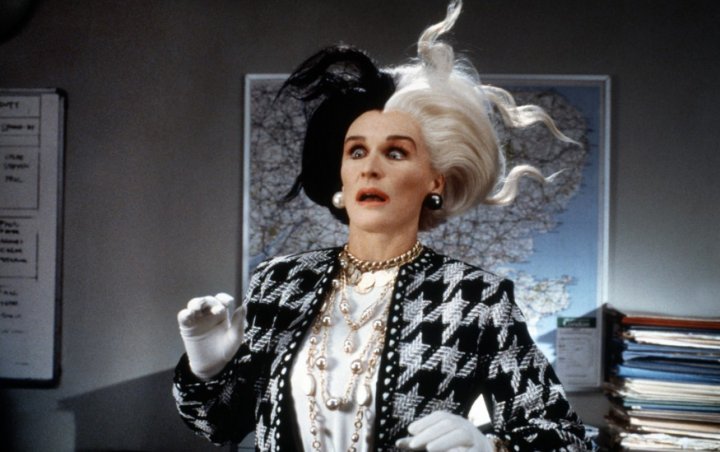 Who could play this other than Close? No one. She’s literally born to play the part. Dazzling performance all around, a type of work that is really hard to do these days without getting annoying. Only Hugh Grant’s recent performance in “Paddington 2” would come close.

Cruella de Vil is the main antagonist of Dodie Smith’s 1956 novel “The Hundred and One Dalmatians” and in Walt Disney Pictures’ animated film adaptations “101 Dalmatians” (1961). She’s the fur-loving fashion maven who’s obsessed with obtaining Dalmatian pelts for her new line.

When Disney wanted a live-action remake, it didn’t sound like a bright idea and indeed it was not. Though it was a major box office success as expected, the film is hardly anything special. Aside from Close’s almost iconic work, of course. Even though it’s written by the late great John Hughes, one should admit that his ‘80s teen films were better than his ‘90s family movies.

Close even changed some of the script, as she didn’t find her character witty enough, so Hughes had to go back to the original film and use more of her character’s lines. Because according to Close, “she should be a combination of Noel Coward and the Marquis de Sade.” And she was.

The result is an energetic and bravura performance that is just endless fun to watch. The film may not be great, but if there’s one reason to watch, then it’s definitely Close’s wicked performance. She reprised her role in the sequel “102 Dalmatians.” 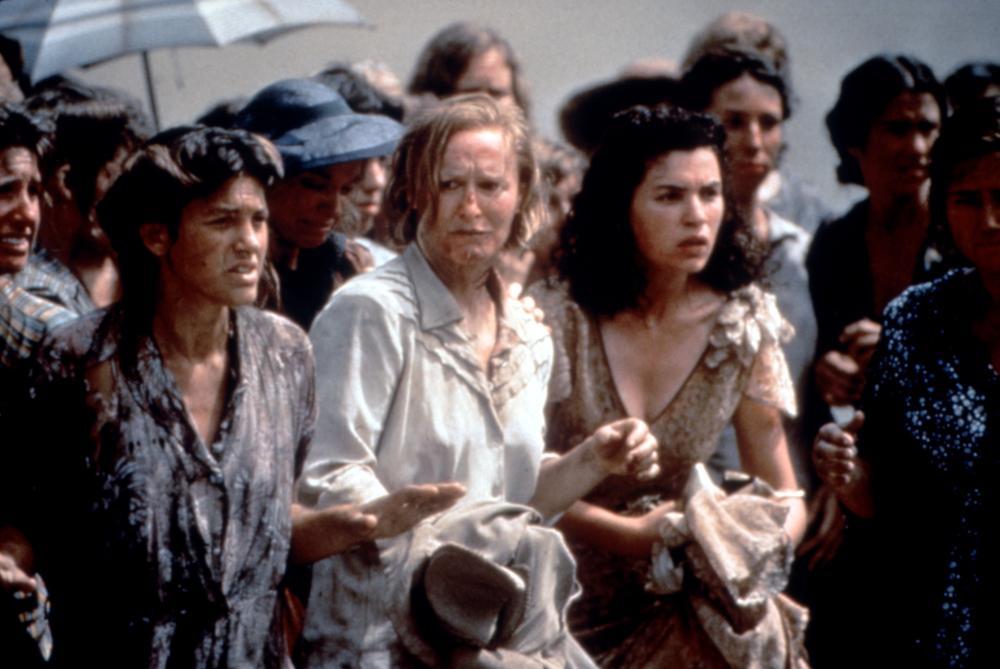 Wish it was a better movie, but it’s one of those rare films about female POWs of the Japanese in World War II. But for a film with such an important subject matter, you would expect it to touch your heart more. Unfortunately, the film has some clichés and stereotypes that don’t help it to turn into a stronger feature.

That said, despite all of its flaws, Close manages to give a very strong and moving work and gives arguably the most effective performance among its cast and also the most well-developed character. The film is about a group of British and Dutch women who were captured by the Japanese while fleeing occupied Singapore during World War II and imprisoned in Sumatra for more than three years.

Close plays the group’s inspiring choir conductor, and they use music to relieve their misery. Bruce Beresford, the director of the film, is an inconsistent filmmaker. At his best, he’s made some really impressive character dramas like “Tender Mercies,” but unfortunately, “Paradise Road” is not one of his stronger efforts. However, it gives us a chance to see how Close manages to elevate the material with her remarkable acting skills.

5. The Safety of Objects 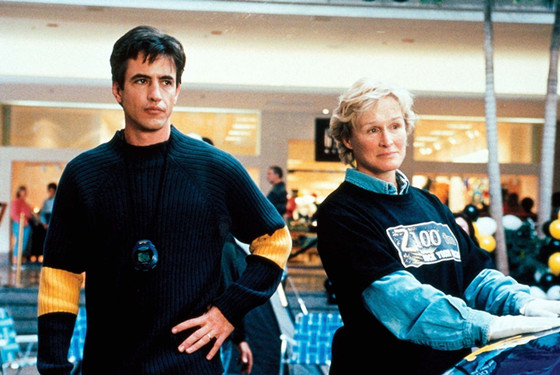 Based upon a collection of short stories of the same name written by A. M. Homes, this film features four suburban families who find that their lives have become intertwined. Close plays Esther Gold, the mother of several children, including a son in a coma from a car accident. You feel her suffering while watching, and how loveless her marriage seems to be.

It’s a multifaceted, multi-layered, multi-level film. Very beautiful, unusual, and complex. Not fast-paced, but its narrative gets you in it and makes you experience the world of our characters and what they go through.

Close is obvious standout, as you’d expect her to be. She’s simply great. Everyone did great for the most part in general, but there’s something about her interpretation of a grieving mother that makes it the most interesting to watch.

One of Robert Altman’s underrated comedies, “Cookie’s Fortune” deals with the suicide of beloved widow Cookie in a small Mississippi town, and the efforts of the local police department to solve the “crime” when it’s re-staged to look like a murder. Her niece is played by Close, who is fantastic as Camille, the most idiosyncratic of her relatives. Camille discovers Cookie’s body and she’s the one who rearranges the whole thing to make it look like a murder. Her character is a director overall.

Maybe due to her iconic roles in the late ‘80s, Close has sometimes been associated with “bitchy” characters. She plays one here, but the impressive thing here is that it doesn’t remind you of her similar roles, which is what makes her such a versatile actress.

It’s a character who gets involved in silly frauds and has ridiculous self-confidence. She’s also an absolute control freak. Julianne Moore is also excellent opposite her and when you see two great actors play off each other well, it gets even more interesting to watch.

3. The World According to Garp 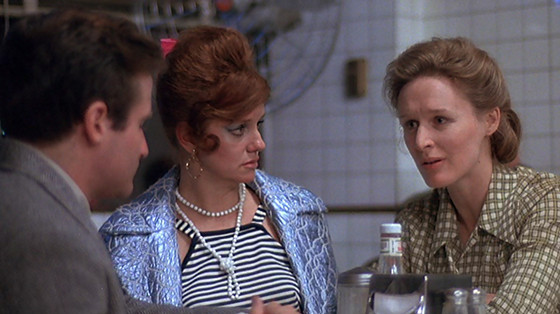 A great start to a great career. Her (affecting) film debut and first Oscar nomination. A unique and quirky film, “The World According to Garp” is a challenging movie for its actors as it spans nearly 40 years and requires the actors to not only age four decades, but to emote four decades of their respective character’s development.

Close plays the title character Garp’s mother, even if she’s younger than Robin Williams. She’s a feminist author and celebrity who conceived a child with a dying soldier during World War II when she was working as a nurse. Her best-selling manifesto turned her into a cultural icon. Garp also decides to be a writer, but his mother’s success overshadows his career.

A popular film critic of her time, Janet Maslin of The New York Times said of her performance in the film: “An entertaining but largely unbelievable caricature in the novel, becomes a full-blooded woman here without losing one bit of her crazy conviction.” That’s exactly what it is.

Close somehow knows how to make her characters more interesting and more absorbing. She stays true to the material but adds her own layers to it. An absolute phenomenal work and one of the most remarkable actress debuts on film for sure. The film, as is the novel, is odd and quirky and may not appeal to everyone’s taste, but with that said, it’s still an unpredictable, original film that is worth checking out. 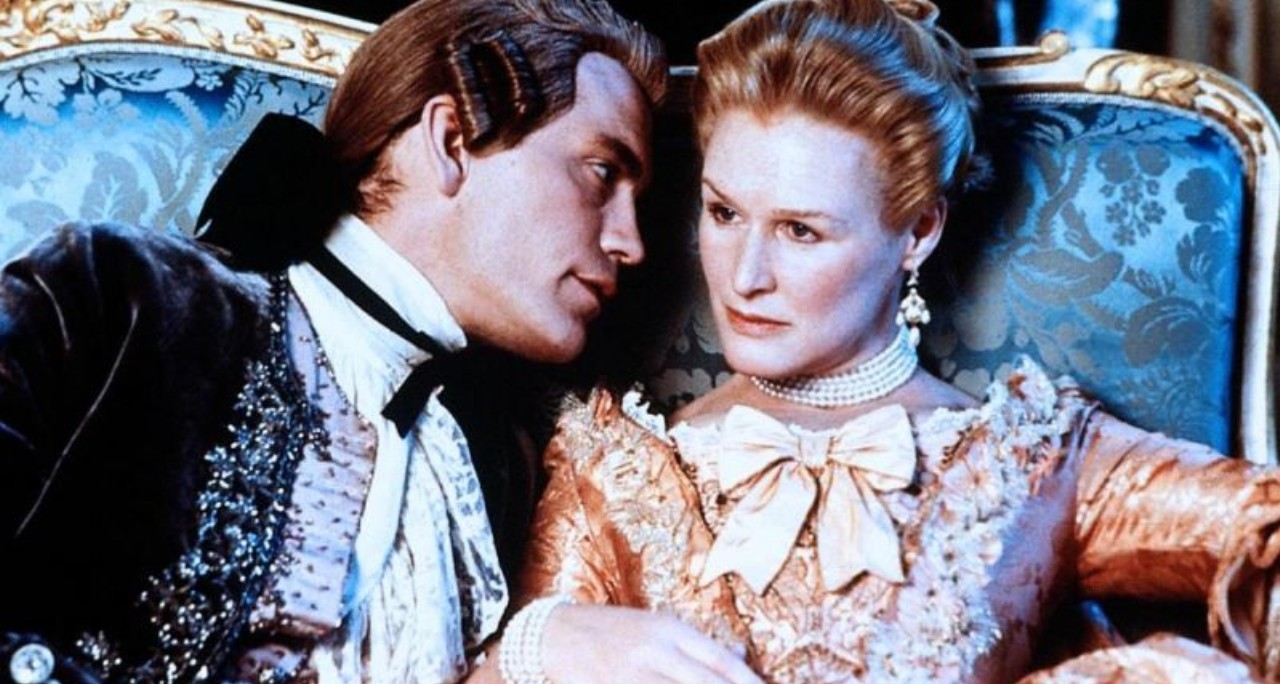 An iconic performance in a Stephen Frears masterpiece. Here is a film where everything is great: an engaging plot, interesting characters, excellent dialogue, terrific acting work, beautiful costumes and scenery, and beautiful music.

Everything about it is so stylish. Written by Christopher Hampton, based on his play “Les liaisons dangereuses,” which was the adaptation of the 18th-century French novel of the same name by Pierre Choderlos de Laclos, “Dangerous Liaisons” is about Marquise de Merteuil, portrayed by the impeccable Glenn Close, as she plots revenge against her ex-lover for ending their relationship.

To soothe her wounded pride and embarrass him, she seeks to arrange the seduction and disgrace of his young virgin fiancée, Cécile de Volanges, with the help of Vicomte de Valmont (a charismatic John Malkovich). But he has plans of his own; he wants to seduce the religious wife of Parliament member, Madame de Tourvel (an amazing Michelle Pfeiffer). Merteuil is intrigued. So she ups the ante, offering him her own sexual favors as a reward, but things doesn’t go as planned.

Close’s performance here is pure perfection; by just looking, you immediately get the sense of a woman who can always achieve what she wants. Without hesitation, she can destroy all obstacles to achieving the goal. She has a cold aura, with a face of cynicism and speech that is always full of sarcasm.

Sometimes she also puts the mask of a kind mentor and a helpful friend. Her line deliveries to her expressions of various emotions, depending on with whom she shares the scene, are just amazing to watch. It’s incredible how she didn’t win an Oscar for the performance.

“I’m not going to be ignored, Dan.” Without a doubt, her performance of a disturbed stalker in this movie is her most famous and most iconic role. Adrian Lyne’s “Fatal Attraction” was a major box office success, and it owes a lot to Close’s performance, which turned her into some kind of cultural icon.

Close plays a book editor named Alex who has a one-night stand with lawyer Dan (Michael Douglas) when his wife is out of town. But Alex doesn’t want it to be just one-night stand, and the nightmare begins for Dan. As she says in her famous line, she’s not “going to be ignored.”

Similarly themed films have made before, such as Clint Eastwood’s “Play Misty for Me,” but what makes “Fatal Attraction” a more memorable experience is that Close gives her character more depth than a typical psychotic character of the thrillers of the era. In her hands, her character is vulnerable and at the same time charismatic, interesting, complex, and of course, scary. She starts to play her character as seductive and slowly turns it into frightening.

Close gives her dimension. “Fatal Attraction” brought her another Oscar nomination and just as with “Dangerous Liaisons,” it’s another performance where you don’t get how she didn’t win the gold.

By the way, despite her turning into a bigger star, she’s actually not too happy with the film as she regrets playing up to the pervasive negative stereotypes of the day. “Most people with mental illness are not violent and most people who commit violent crimes do not have a diagnosed mental illness.” The performance still remains haunting as ever.