A film sure to send chills down the spine of at least half of each couple in the audience, Gone Girl turns the psychological duel level up to eleven. Through the examination of the crumbling marriage of a socially successful couple, director David Fincher sets the stage for a battle of wits between the husband and wife that have the highest possible stakes. The intimate nature of the relationship between the two combatants makes Gone Girl a chillingly relatable story by implying that this could happen to anyone at any time.

The drama begins when the wife goes missing on their fifth wedding anniversary, and the husband is implicated as the prime suspect. As the investigation deepens, the dark underbelly of their marriage is revealed, and nothing is as it seemed.

It soon becomes clear that her disappearance was the tip of an iceberg which ran deep into an abyss of deceit, manipulation, and cruelty. The shocking psychological duel which corrupted their marriage is finally revealed, but the mind games are only just beginning.

A unique film in its concept and execution, Rope frames its claustrophobic story in real time. Two young college graduates throw a dinner party centered around one of their former classmates; they invite their friend’s family to join, as well as an old teacher they all shared. However, only the two hosts know that the body of their classmate lies in a chest in the middle of the room, and that they strangled him with a piece of rope.

The psychological duel here is a complex one, because the misguided intellectuals want both to conceal their crime and to flaunt their perceived superiority. Through a perversion of a philosophy lesson their teacher once gave them, they believe that their successful murder is proof of their lofty minds. They hope to impress their old schoolmaster by leading him to the truth without their actually revealing any details.

As the evening progresses, their secret is threatened with revelation at every turn, and the guilty pair must preserve their anonymity while trying to gain the recognition and approval they believe they deserve. 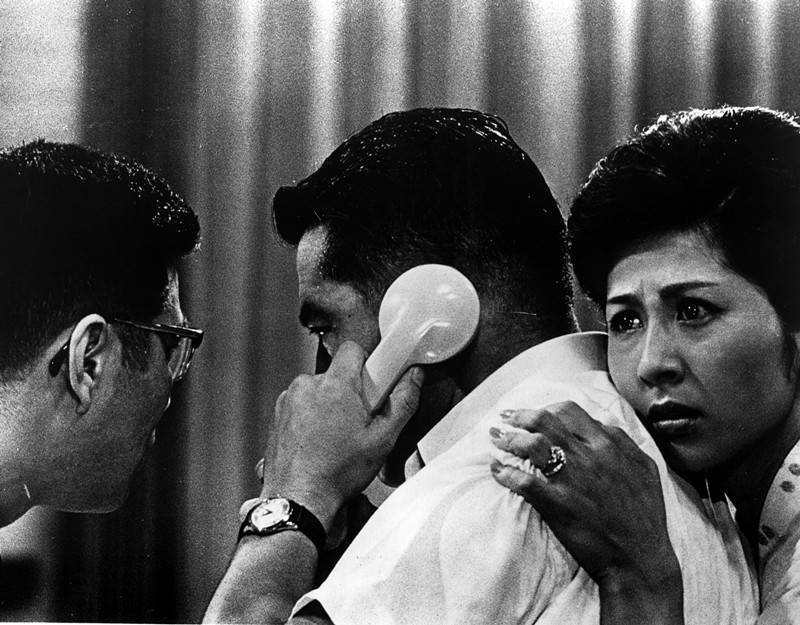 Kurosawa tried his hand at crime drama in High and Low, and created a classic in the process. With its complex and unconventional narrative, this film provides the opportunity to analyze its psychological duels from different aspects.

The principal duel occurs between a wealthy businessman, played by Toshiro Mifune, and a frequently faceless villain. Though the antagonist is shown on screen a few times throughout the film, he is largely an representative force until the end of the film, when the conflict manifests in dramatic fashion.

When the businessman receives an anonymous call one day that his son has been kidnapped, a large ransom is demanded but no motivation for the crime is given. The father must weigh the risk of incurring personal bankruptcy to pay the ransom against the possibility that the kidnapper might not follow through on his threats. But even after this initial decision is made, High and Low has more twists and psychological drama in store.

When a British aristocrat hires a mysterious but competent manservant, he little realizes the trouble he is unleashing upon himself. James Fox and Dick Bogarde are each splendid as the master and the assistant participating in one of the most iconic psychological duels in cinematic history.

Before long, the servant’s dissolute lifestyle and corrupt habits put his employer’s house in a poor state, and the master is forced to fire him from his position. But he little realizes the extent to which his former employee’s influence and power still have control over his own life

. Through blackmail and extortion, the servant manages to regain his old position, and the psychological duel kicks into top gear once the relationship is no longer mutually voluntary. For a riveting story featuring two great actors in peak form, look no further than Joseph Losey’s The Servant.

Cape Fear is one of the most perfect examples of a psychological duel in a film. In this case, the players are a well-respected attorney and the newly-released criminal whom he helped put away years ago. Determined to get revenge, the criminal begins to stalk the lawyer and his family by insinuating himself into every aspect of their lives. Gregory Peck is excellent as attorney Sam Bowden, and Robert Mitchum is unforgettable as the malicious villain Max Cady.

The tension in this psychological duel is heightened because of the way Cady antagonizes Bowden and his family. Cady stays just on the right side of the law by carefully avoiding any illegal actions while still delivering his malicious threats to his adversary.

Because no outright actions can be taken by Bowden to protect his family, he must engage Cady in a more intangible battle of wits in order to stop the madman. The use of mental cunning to prevent a very real physical threat is harrowing for the viewer to engage with, and it makes Cape Fear a powerful viewing experience.