Richard Matheson’s 1954 novel is a seminal piece of fiction blending two subgenres: vampire tales, and stories about the last man on earth (which was even the title of the 1964 adaptation starring horror legend Vincent Price). After humanity is all but wiped out by a pandemic that has turned everyone else into a member of the undead, Robert Neville remains the last human alive, immune to the disease for a reason he never uncovers.

The 2007 adaptation of the book casts Neville as an army virologist attempting to create a cure for the plague of vampirism, while broadcasting messages he hopes will be picked up by anyone still human.

After encountering two other uninfected people – a woman and a young boy – Neville ends up sacrificing himself while they escape from an onslaught of “darkseekers.” They are able to reach a fortified compound of humans and distribute the cure Neville was able to synthesise at the last minute, justifying the title by declaring that his actions become legend as a result.

In the book, there is nothing special about Neville except for his unexplained immunity to the vampiric virus. He has no expert knowledge, to the extent that about a third of the book involves him teaching himself biology so he can get a handle on what’s actually happening, in between daytime excursions of searching for nests of sleeping vampires to eradicate. It’s only at the end when he is captured by members of the new vampire society and sentenced to death for his actions that he realises the reality of what he has become.

Vampires are now the everyday population of the planet, while through his diurnal destruction Neville has become the new aberration, the monster stalking the daylight, the bogeyman who will strike at their most vulnerable and exterminate them without a moment’s hesitation or a shred of remorse. This is the meaning of the of the book’s title and ultimately the entire point of the story.

Todd, a teenage boy obsessed with the atrocities of the Second World War, discovers his neighbour is Kurt Dussander, a Nazi war criminal in hiding. He blackmails the old man into telling him stories of participating in genocide in the concentration camps, beginning a series of mind games between the two as each holds the other’s dark secret over him.

The film ends when Dussander is hospitalised after a heart attack and is recognised by an elderly patient who saw his family murdered in the gas chambers. Instead of facing justice for his crimes, Dussander gives himself an air embolism by blowing into his IV to induce a fatal stroke. Todd escapes any repercussions by convincing the police he knew nothing, and threatens to accuse his guidance counsellor, the only one who figured him out, of paedophilia should he say anything.

The differences of the ending of Stephen King’s novella are seeded earlier, where Todd’s fixation with death and suffering develops into him murdering numerous homeless people, which somehow quells the nightmares brought on by his obsession. After Dussander’s death he kills the guidance counsellor instead of just threatening him, and embarks upon a shooting spree that ends in his death some hours later, suggesting that the pure evil the boy had become meant there was no way he could continue to exist in everyday society.

The second adaptation of John W Campbell Jr’s 1938 novella Who Goes There? (after the 1951 Howard Hawks-produced The Thing From Another World) is a far more faithful variation on the tale, and also one of horror master John Carpenter’s best films.

The story of each follows a group of scientists in the Antarctic who encounter an alien life form frozen into hibernation in the ice, which subsequently awakes. They learn too late that this Thing possesses shapeshifting abilities, leading to mistrust and paranoia as nobody is able to tell if whoever they encounter is still human or an assimilated alien, which has begun picking them off one by one and assuming their forms. The novella ends after the aliens are revealed and their plan of escape is uncovered minutes before being enacted, resulting in a victory for the humans.

The film ends much the same, the use of SFX legend Rob Bottin’s creations realising the Thing in all its grotesque chimeric glory, but adds some memorably tense final moments where the final two survivors face each other in the smouldering wreckage of their outpost, leaving it ambiguous over which, if either of them, is an alien, as they slowly freeze to death in the Antarctic snow.

You know the story. A pair of young romantics from warring families meet by chance at a party and declare their eternal undying love for one another, only for events to conspire against their being together and they end up killing themselves in tragic circumstances. Quite how a pair of hormone-addled teenagers committing suicide became held up as history’s greatest love story is a subject continually troubling, but also one for another article.

Troma, in case you’re unaware, is a schlock factory of a studio founded in the mid-‘70s dedicated to producing films low in budget and high in trash that feature comically excessive violence and shamelessly degenerate sex, with some of their more renowned titles being such cinematic masterpieces as The Toxic Avenger and Class of Nuke ‘em High.

Narrated by the legend that is Motörhead’s Lemmy, their adaptation of Shakespeare’s most famous play is surprisingly faithful through all the depravity it adds in, the general plot following the same direction and managing to hit the main story beats, while occasionally weaving into Shakespearian dialogue both pseudo and genuine, and updating the play’s Elizabethan insults (“How would you like me to use your guts to Jackson Pollock the streets?”)

The twist ending is foreshadowed throughout the film by periodic allusions to some great secret about Tromeo’s parentage, and is ultimately revealed that his biological father is actually the Capulet patriarch, meaning he and Juliet are brother and sister. They decide that after everything else they’ve been through it’s a comparatively minor thing to accept and drive off together, going on to have hideously deformed children mutated by incest. Believe it or not, this is actually at the tamer end of Troma’s love of the obscene.

10. The Hunchback of Notre Dame 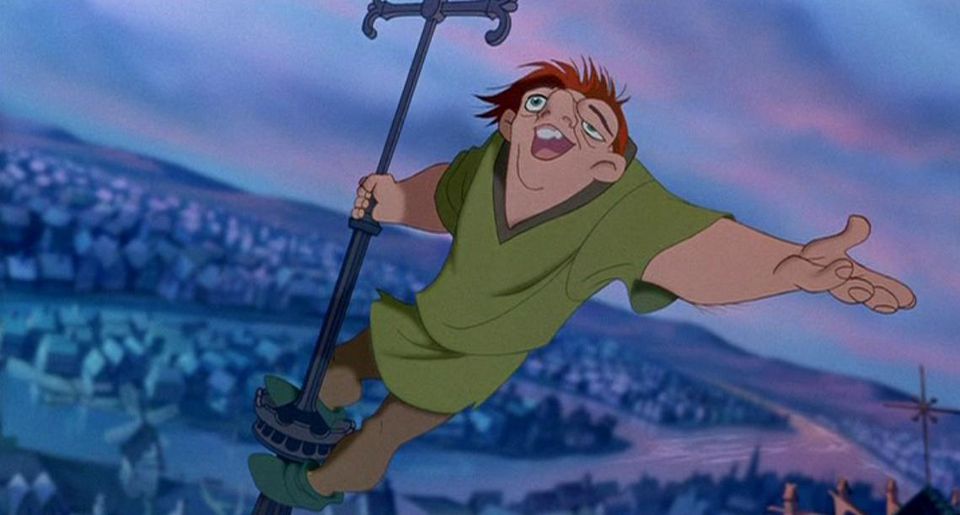 Disney is notorious for whitewashing the more gruesome aspects of the various books, myths, folk tales and real-life stories it adapts for mass consumption by children the world over.

Adapted from the novel by 19th century French writer Victor Hugo (also the author of Les Misérables), the megalomaniacal corporation’s 1996 animation is the story of the titular bell ringer of the famous Parisian cathedral, who is met with scorn and derision after leaving the safety of the cathedral walls, receiving kindness from nobody except compassionate gypsy teenager Esmeralda. Afterwards, he must save her from the perverse lust of Frollo, a sadistic and sanctimonious judge who is also his reluctant guardian.

The film’s climax begins when Frollo sentences Esmeralda to death for witchcraft when she rejects his lecherous advances. Quasimodo saves her from the execution pyre, and in the ensuing fight at the top of the cathedral, Frollo dies a typical Disney villain death by falling to his doom. Everyone else lives happily ever after.

In the book, they most decidedly do not. Esmeralda is sentenced to death for an attempted murder actually committed by Frollo, and Quasimodo fails to rescue her from the gallows due to misunderstandings that could have led to her salvation.

Frollo also falls to his demise here, although Quasimodo takes a far more active role the process by pushing him off the parapet when he laughs at Esmeralda’s death, and then afterwards he disappears. He is found by accident two years later in the cellar of the royal gallows used for executing traitors, where Esmeralda’s body was taken after her hanging. He is dead of starvation with the girl in his arms, the two desiccated corpses entwined in death.