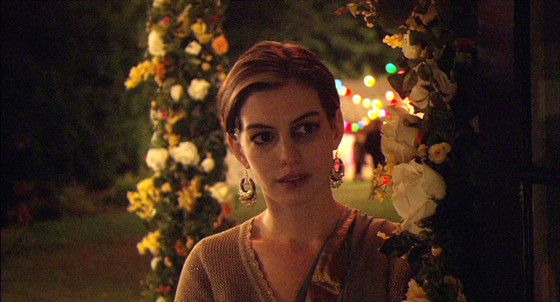 Rachel Getting Married is another fantastic film that uses addiction as the focal point. It tells the story of a recovering addict’s (played by Anne Hathaway) brief return home for her sister’s wedding. All of the ingredients for a powerful film are there: a vulnerable character is faced with a very stressful event, she is contrasted with other characters that are the complete opposite, there are great performances, and it’s shot almost like a documentary.

But Rachel Getting Married is particularly effective because it’s not just a film about a destructive person, it’s about a specific time and that person’s inevitable relapse. The pressure in the main character’s life builds until she cannot take it anymore; it’s as if self-destruction is the only choice she feels she has. Hathaway’s character is a tragic figure who has made a lifetime of poor decisions and can’t take responsibility for her actions.

Annihilation is the most recent film on this list, but it has already established itself as one of the best sci-fi films of the last few years. From the very start, Annihilation lets you know right away it will be a film primarily about self-destruction.

One of the reasons Annihilation is one of the better films to feature destruction as a theme is the fact that it lets its characters venture to places with real danger. Annihilation is about exploring the unknown, even if that is likely to involve death. It would be difficult to spoil a film like this, but to say anymore would ruin the experience.

Taste of Cherry is a quiet, slow-burn about a man’s final descent into making the decision to commit suicide. It’s incredibly slow (Ebert went as far as calling it “excruciatingly boring” in his review of the film), but for those that appreciate Kiarostami’s work that is part of the appeal of Taste of Cherry.

It’s a film about self-destruction that has none of the trappings we might think of when we hear that phrase. There are no scenes of fun partying and drinking to mark the end of the character’s life. Instead we see a thoughtful film in which a man is very seriously thinking about if his life has reached its end or not.

A lot of the film takes place in the protagonist’s car, and there are several shots of landscapes as the man drives around for what could be his last time. Ebert wasn’t wrong when he called the film “boring,” but self-destruction has arguably never looked so meditative on film before.

Leaving Las Vegas is one of the most revered self-destruction films of all time. It’s about a man (played by Nicolas Cage) who makes the choice to abandon his life by heading to Las Vegas to kill himself. However, his choice of suicide is a bit less final than others we’ve seen onscreen before: he wants to drink himself to death. He meets a prostitute (played by Elisabeth Shue), and the two form a strange relationship.

One of the most striking aspects that makes Mike Figgis’ film so great is how authentic it is. In addition to being inspired by real events (the film is an adaptation of a partly autobiographical novel by John O’Brien), Nicolas Cage and Elisabeth Shue managed to turn the film’s stock characters into much memorable people than they have any right to be. They both did more research than necessary for their roles: Cage apparently went on a bender in Ireland for a brief period, and Shue interviewed real prostitutes in Las Vegas. Their performances would later be acknowledged by the Oscars.

These three great Scorsese films (spanning three different decades!) have been mentioned several times, but they are being included in this list again because they are each excellent examples of how self-destruction can look. For stockbroker Jordan Belfort, that means taking the American dream and turning it into something ugly. In Goodfellas the idea presents itself in the form of murder and betrayal.

In Taxi Driver we see a man pushed beyond his breaking point, and he reacts to a destructive society with more destruction. Scorsese is one of the best filmmakers at illustrating characters who have a rise and fall of some sort. The dark side of the American dream is naturally self-destruction for so many.