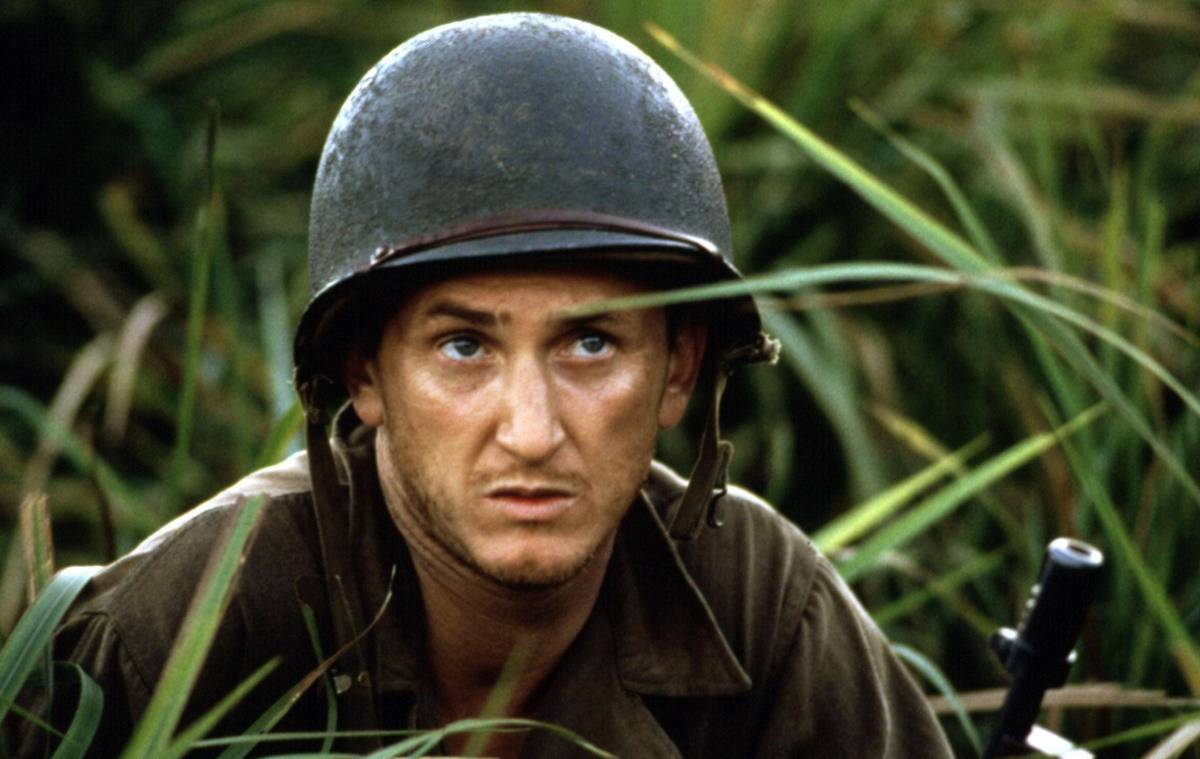 After a twenty year hiatus, Terrance Malick soared to new heights from his two films in the 1970s with ‘The Thin Red Line’. Sadly overlooked at the time due to another war film that year, people might have expected something different than a falsely labeled action war film. Here, Malick stunningly portrays the survival, life and death inner thoughts of these soldiers longing for meaning in their lives as they lost in the jungle and chaos of a war.

Malick takes his time in this film as he always does as he plays by his rules. We can see this in the first 20 minutes of the film, we don’t get any dialogue as the lead, Jim Caviezel’s Pvt. Witt plays innocently among the native people, swimming in the ocean, and dancing along with them in a beautiful Melanesian choir hymn.

This introduces us to the flashbacks of the characters, the voiceover, the mediative, nature of the camerawork immersed in the wilderness. There are some truly cinematic scenes that can gain the attention of a viewer just wanting a war film such as the tracking shot attack on the Japanese as the camera gets lost amongst the chaos like Pvt. Witt or the repetitious bombing on Guadalcanal as the Marines wait for their opportune moment to attack.

It also grabs devout Malick lovers as he starts to experiment by with the chattering voice over amongst silent characters as when Sean Penn’s First Sergeant Welsh is purposely away from everyone else, on a desolate porch but prefers to be alone other than being lonely amongst the men. But after experiencing this poem of a war film that only Malick could have made, we are transported to new heights when Witt achieves a state of grace and is buried on the island.

The final frame of the helmet and a long weed in the water as the Melanesian choir hymn starts due we come full circle on this meditative, brutal poem of a war film that lingers in your head regardless of whether you liked it or not. 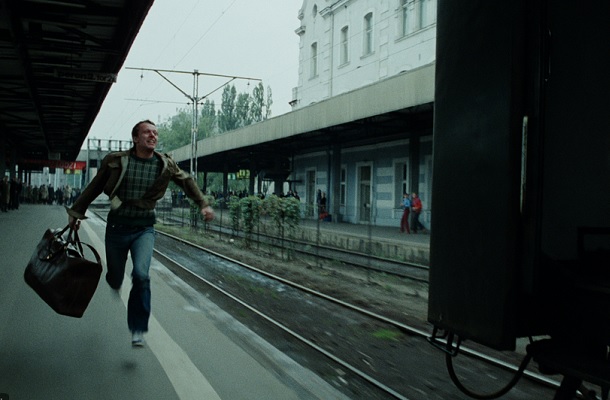 Upon entering the 1980s, Krzysztof Kieslowski would reach new stature as he moved from his documentary roots to true poetic, cinematic director. The first film of the decade for him was a film told in three different outcomes as whether our protagonist Witek catches the train to Warsaw.

When watching the film, Kieslowski makes each part exciting because they different in overall mood and atmosphere despite being rooted, in still Communist Poland in the 1980s. Along with each running after the train, a thrill ride that KiesIowski truly makes it entertaining as a chase film. But it isn’t until the third story, where the first two were polar opposites, due we see where it might be heading.

We patiently guide along with Witek and his now wife, Olga, making choices in a social, political and most importantly, humane context to the final scene. At the end of the film, Witek is on a plane, seeming to have the life he wanted and the life a viewer would want for him as opposed to the first two stories, but then the plane explodes as if you think something is wrong with the projector, DVD, or streaming service.

It’s here as the film goes to black, we resonate over all three stories – would Witek be better off as a miserable, troll like Communist and alive? Living a harsh and repressive fighter against the Communist regime and alive? Or lived a peaceful as can be life and die all too young leaving with child and pregnant wife?

It’s the sudden explosion that causes an inner explosion in ourselves where we think ‘what if?’ or which storyline has the best outcome, it exemplifies how Kieslowski has the ability as a filmmaker to leave his films in the mind of the film goer after the story concludes before out eyes.

A film that tests and rewards the viewer’s patience at almost three hours and twenty minutes. Chantal Akerman’s most well known film is a cult classic, feminist masterpiece, arthouse film or more importantly, all of the above. We witness or merely observe the daily routines of a woman by the angelic yet humane Delphine Seyrig, who goes from the normal route of chores to prostitution in her home.

As with any Akerman film, the frames play out in real time, no manipulation, no insert of a close up, or score to provoke a different feeling. As the film begins and continues along with the repetition of frames and actions by Seyrig are we drawn into a meticulously, detailed world. He notice how Dielman cooks, cleans, walks, turns, speaks, every detail is precise wit the same camera position, lens, lighting, etc.

So it’s only when the film progresses and we see a mistake or out of tune rhythm from Dielman do we gasp or realize something is up. However, don’t expect an explanation or groundbreaking cathartic moment in the film because it simply continues on Akerman fashion. But as we come to the end of this film and, yes spoiler alert, Dielman kills a client on the third day in the film. After such as minimalist film (and filmmaking) experience, we are somewhat horrified in a Haneke fashion.

But why did she do this? What was going on in her head? Did we miss something, another mistake in her routine, the previous two days? Was it the oppression on women in the twentieth century? And the list goes on, but it’s after we cut to black in this pinnacle of the ‘Slow Cinema’ movement, can we start to ponder on what is all means.

The third film from Thai director Apichatpong Weerasethakul might be his most polarizing film in his filmography. The film explores similar themes on his work, the history of Thai culture, the ghostly apparitions of relatives, and the connection between the past and present rooted in one’s existence. But this film spilts its narrative in a way no films have even done.

The first section of the film is where a soldier strikes up a friendship and eventual romance to a rural boy. As the film nears the hour mark, the boy runs into the jungle at night. It’s here where the soldier goes looking for the boy but comes upon a tiger shaman in the woods.

The film takes on a completely different tone as we go from a budding, developing romance with touches of coming of age and falling in love to a transcendental, observant and meditative film experience in a nearly silent second act.

As a viewer, we must indulge in the choices by Weerasethakul or we will be lost, just or maybe even more so than the soldier in the film. It can be very relatable on a first viewing that one can lose interest in the second act but after if you’ve only seen the film once or a couple of times, it’s when the credits roll do you start to ask yourself questions.

It might be – what the hell was that?! Or more appreciated and engrossed questions – Was the tiger the rural boy? Why did the soldier have such as hard time relating to the tiger if it was him? Was it pure reincarnation as the boy died? Did we enter a dreamscape in the landscape of the Thai rural community?

There’s many interpretations to the second act particularly but here is a film that hits you after it’s over due to the narrative and filmmaking choices made by Weerasethakul in themes he continues to explore. 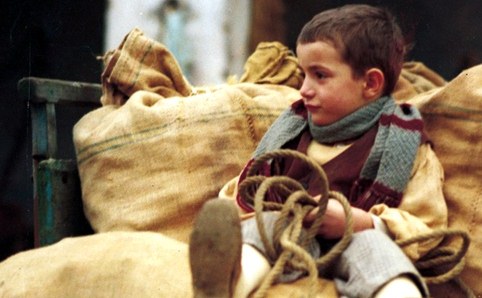 In this masterpiece by the underrated and under appreciated Ermanno Olmi, he almost documents the lives of four farming families in the late 19th century northern Italy. It is important to note, Olmi cast nonprofessional actors in their native dialect to portray the characters in the film, and as a result we get a Palme d’Or winning film of neorealism in the most cinematic way possible.

As the film begins and progresses, we simply observe these characters and their daily lives in the fields, in the home night, and the status of their relationship. It’s here we focus on young, middle age and elderly couples where one can almost view them as one progression of a couple due to their appearance, the way they act and move and express their limitations.

The film touches upon the political situation but thats not very important to the overall epic and intimate scope of the film – it’s the underlying humanity and livelihood of the characters as it advances through life and death to we see the full canvas Olmi portrayed in his film. It’s at the end of the film and slightly over three hour runtime do we feel like we observed the lives of children, young adults, adults, and elderly people in one community and place.

It’s as if we lived an entire lifetime in just one sitting. Olmi somehow managed to express four generations of families in a stark, breathtaking, realist fashion that as a film goer, we are left we should be. We are moved, touched, thought provoked, and a film that lingers in the mind for years to come. The choice why is totally up to you.

1457
SHARES
FacebookTwitterSubscribe
Subscribe via Email or RSS Feed
Pages: 1 2
Comments (13)
Movie Masterpieces That Hit You When They're Over