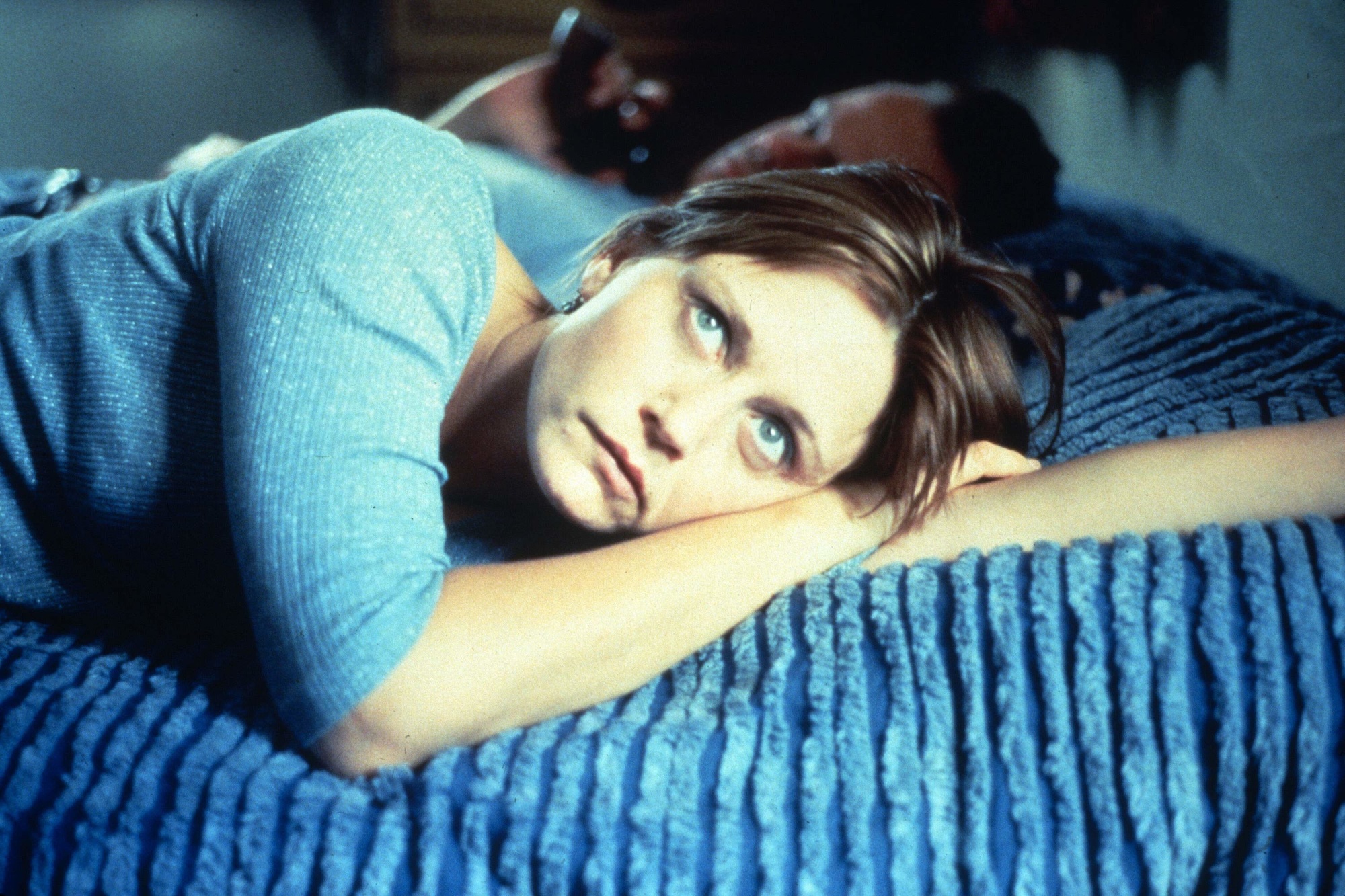 Described in her own words as “a road movie without the road, a love story without the love, and a crime story without the crime,” Reichardt’s River of Grass catches up with a thirtysomething mother and housewife named Cozy (Lisa Bowman) who foolishly falls for Lee (Larry Fessenden), a pistol-packing ne’er do well in the sun-scorched Everglades of southern Florida.

Reichardt grew up in that corner of the world, and her lens lovingly captures the occasional boredom, and unsuspecting beauty of the country there. And when our slacker-couple predictably fuck things up, they make an ill-advised tragicomic go at the outlaw life.

Even though Reichardt’s first film charmed Sundance and made year-end lists far and wide, River of Grass was nevertheless her only feature for well over a decade (until 2006’s Old Joy), citing being stifled by male-dominated industry that was so idiotically reluctant to finance women-helmed pictures of the art house variety. Typical.

“Highly original and filmed with perfect assurance,” raved Dave Kehr of the New York Daily News, who also called it “one of the finest independent films of recent years”, River of Grass is a remarkable work, and a fabulous first flight from one of America’s most gifted of storytellers.

Polish filmmaker Andrzej Żuławski (Possession [1981]) had a career that was unfairly full of state censorship and prohibition, and yet he still made many of the most visually extravagant films you’re likely to ever see. Regarded as an unruly epic, his 1988 film maudit is, as New York Times critic J. Hoberman puts it, as “Żuławski’s masterpiece … On the Silver Globe is outsider art on a huge scale.”

After the success of his French-made film That Most Important Thing: Love (1975), Żuławski returned to Communist Poland in 1976 spent the couple of years shooting an ambitious and costly adaptation of his great-uncle, Jerzy Żuławski’s eponymous 1903 sci-fi novel before Polish authorities shut him down.

Cut to a decade later and Żuławski piecemealed the surviving material, adding newly restaged sequences, documentary footage, and voiceover, to produce an overstuffed, opulent, and fully-fleshed version of his “murdered” masterwork. A gorgeously garish tale of astronauts marooned on a replacement Earth who forge a new, society amid the planet’s telepathic race of bird people.

Grandiose cinema of this nature is an absolute anomaly, and On the Silver Globe is like nothing you’ve ever experienced or seen before. Stunning stuff.

This ‘End is Nigh’ thriller stars Anthony Edwards as Harry Washello, a lovable loser (typecast much?), who just met the love of his life, Julie Peters (Mare Winningham) on the same night that he mistakenly answers a pay phone, unwittingly intercepting a cryptic message warning of a nuclear war that’s only seventy minutes away.

The majority of the film is played out in what feels like real time, and many Hitchcockian curve balls get lobbed at the audience as we wonder, amongst other things, was the phone call for real? Is it all an elaborate put on? Will Harry rescue Julie? Just how big a budget does this movie have?

Writer/director Steve De Jarnatt (Cherry 2000 [1987]) deserves mad props for Miracle Mile, a passion project he pursued for years. The resulting film, criminally underseen, is incredibly effective for its small scale; several sequences of riotous havoc and mayhem are visually arresting and show no indication of a low budget.

The sometimes perverse plot twists and sneaky turns are engaging, and, wisely the question of doubt and disbelief are left to linger until the final minutes of the film as a will-it-or-won’t-it white-knuckle conclusion will totally rock the viewer as their jaw hits the floor. A gem.

This delightfully macabre exercise in sassy seduction and strange, vintage sensations from polymath filmmaker Anna Biller (Viva [2007]) feels like it was made in another era altogether, but it’s wonderfully adorned with bracingly modernistic designs. The Love Witch is a knock-out!

A stunning to look at and thrilling to think about throwback to the Technicolor melodramas of the swinging 60s and with shades of the sexploitation cinema that supervened, The Love Witch features a star-making turn from Samantha Robinson as Elaine, the eponymous witch.

Biller’s inspired and kaleidoscopic set design, sumptuous costumes, and deliberately superannuated aesthetic is a crafty coup de cinema, combined with an excellently effective soundtrack (which has been on a continual loop on my stereo since its release) and kitschy ornamentation that makes The Love Witch a ravishing and ineffable entertainment. Whatever Biller cooks up next, I’ll be first in line, but until then, don’t miss the Witch!

Is there a filmmaker alive today that’s as notorious, and otherworldly as octogenarian and old hand, Kenneth Anger? Of course not!
Easily Anger’s most ambitious and expansive film, Lucifer Rising was an elaborate production filmed largely in Egypt with Anger playing the role of the Magus, Marianne Faithfull as Lilith, Chris Jagger (Mick’s brother) as the Man in the Yellow Tunic, Scottish filmmaker Donald Cammell as Osiris, and Myriam Gibril as Isis, rounding out the cast.

Alien spacecraft, Egyptian symbolism, and locales pertinent to Aleister Crowley’s famed “The Book of the Law” 91904), regarded as the sacred text of Thelema, populate and navigate the film. Lava flowing, skies swollen with storm clouds, glimpses of Stonehenge and the Great Pyramids compete with cobras, crocodiles, and stampeding elephants, all mid-magick formula, a blue-skinned Faithfull (looking authentically strung-out), green-fleshed Cammell, the genealogical Sphinx, all enigma and ancient, everything alien and oracle.

The final film in Anger’s Magick Lantern Cycle, Lucifer Rising certainly transcends its time and its place. The raging counterculture and rocky social tensions influenced these films as much as Anger’s own psychic agenda.

Experimental films of this nature may not necessarily contain traditional narratives or be considered great love stories with browbeaten lovers clutching emptiness, their bruised hearts in twain. But that isn’t to say the figures herein, fraught with anguish, faces pained or enraptured, bodies bent and brave, are poised between perfection and flight, are ageless and alive. Lucifer Rising is a classic, and the crowning work of a true visionary. Miss this movie at your own peril.