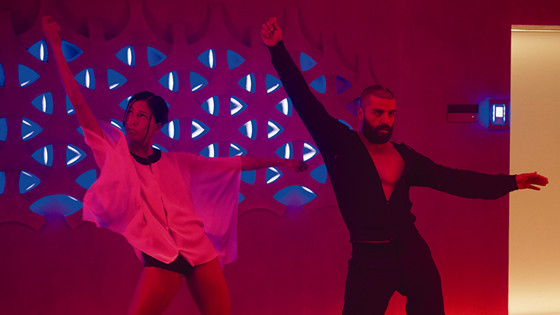 Uncanny valley is a notion derived from Freud’s analysis of ETA Hoffmann’s story The Sandman, and holds that the more human-like an object or thing, the creepier it is. Hoffmann’s macabre fairy-tale The Sandman centres on a man falling in love with an automaton that is so realistic that many mistake it as alive. Such a theme has been explored in cinema many times, but Ex Machina captures a sense of fairy-tale mystery.

The film follows Caleb who is asked to assess whether a “feminine” and weirdly arousing robot called Ava has consciousness. Soon Caleb finds himself in love with Ava, but Ava’s creator Nathan suspects Ava may be seducing Caleb. This film is one of the more unnerving examinations of the threat of machines taking on human characteristics.

4. Eyes Without a Face, The Skin I Live In and Goodnight Mommy

Eyes Without a Face, an influential gem by Georges Franju, has a Frankensteinian quality. Doctor Génessier has a daughter, Christiane, who has suffered facial disfiguration. Naturally for this Gothic horror, he keeps her locked away and kidnaps women to remove their faces and graft onto his daughter. We often see her face covered with a creepy mask. Whereas the uncanny often entails the unliving coming alive, we witness Christiane treated as an object of her father’s design, an object he wants to decorate, and as a science project.

Pedro Almodóvar’s The Skin I Live In directly references Eyes Without a Face, following a plastic surgeon who transforms a man into a woman and renders him into the visage of his dead wife. Associated with Queer cinema, Almodóvar’s film conveys the idea that identity is fluid rather than stable and suggests that the home and the family need to embrace the uncanny.

Veronika Franz’s and Severin Fiala’s Good Night Mommy is like Eyes Without a Face features a woman whose face has been obscured by bandages. Two young boys suspect that their mother, who has come back with a bandaged face after a stay in hospital, is really an imposter. The film conveys a sense of the familiar rendered terrifying as we witness the boys react to their mother, who behaves in a way very different from how they expect. The slide into body horror and the twist at the end may ruin the uncanniness for some viewers, but the film is definitely worth watching.

Antonioni’s celebrated masterpiece explores a sense that the modern world is a threatening place and that human beings are losing any sense of connection between one another, and therefore their humanity. The narrative begins by following a modern couple breaking up. But the film ends with images of modern geometric buildings, screeching cars, deserted areas, trickling water all mounting in an ominous way, with street lamps taking on a sense of life.

There is an anxiety, buried inside many a modern psyche, that the familiar facets of modern life will eventually signal the destruction of human beings altogether.

Cronenberg along with Lynch, is one of the most uncanny filmmakers working today. The Fly shows a person’s Kafka-esque transformation into a disgusting abject insect-human hybrid and Naked Lunch features a typewriter fused with a beetle, resembling Dali’s Lobster Telephone. Both Videodrome and eXistenZ display modern technology transforming into threatening biological forms. But one of the subtler examples of the uncanny is Dead Ringers, which follows identical twin brothers, Eliot and Beverley who are both gynaecologists. Eliot is suave while Beverley is studious.

As such Eliot seduces women and then encourages Beverley to pretend to be him. Brilliantly played by Jeremy Irons (as both brothers), this unnerving premise mounts creepiness when Beverley develops a drug addiction and starts hallucinating that the women he operates on have strange mutant bodies. As such he develops weird instruments to perform surgery on his patients. Eliot attempts to rescue Beverley from himself but the twins become each other’s doppelgänger.

Lucile Hadžihalilović has created two uncanny features about the transition to adolescence: Innocence about prepubescent girls in a special boarding school and Evolution, where pubescent boys become pregnant and their mothers are really imposters feeding them sludge that looks like it came from the bottom of the ocean. While both films are uncanny and explore childhood transition and its accompanying anxieties, Evolution borrows more from horror and science fiction.

Indeed, as with the Alien franchise males giving birth is a source of the uncanny. Set by a seaside in which everyone in the area is either a boy or a grown woman, much is left unexplained in this enigmatic, atmospheric film. In order to establish this atmosphere, the film focuses on starfish and other underwater lifeforms that are themselves uncanny.

Evolution combines various aspects of the uncanny previously analysed including the theme of childhood transition, concerns about biological experimentation, and gender confusion. Perhaps the most beautiful film listed, Evolution reveals that the uncanny can be wondrous and beautiful as well as a source of terror and anxiety.