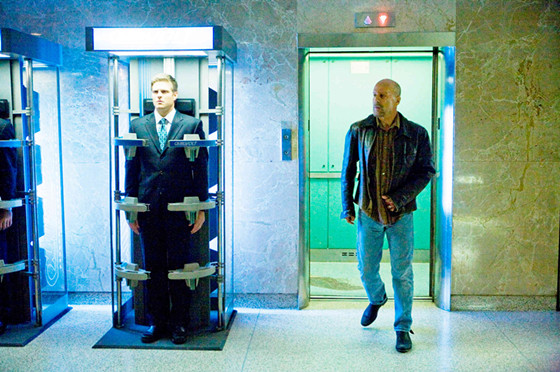 The other end of the simulation spectrum is using a virtual reality simulator to power a remote body, hence the name Surrogates. Each person lays in a sim chair at home and has an android body that walks the city and gives them a window into the world. It’s far safer to stay home and pretend to be somebody else, somebody stronger, better looking, healthier, faster, and so forth.

The neural interface remains out of reach, but it isn’t unthinkable or impossible. It is seen by many as inevitable instead, and the first steps have been taken. It is not so different from sending a probe into the depths of the sea where no human could survive, tethered to ship or submarine that allows the driver to see, hear, and run tests at a safe remove. Space exploration has been of the same kind in recent years, and with a neural interface a remote ‘surrogate’ would have far more ability.

The androids portrayed in the movie are well beyond current technology, but as the sex robot and realistic baby doll industries are demonstrating, it’s not impossible to move a robot from clunky weirdness to Uncanny Valley. We also have robots that walk in a human-like way, and with a human brain to run the computers, it could become very difficult to tell a surrogate from an actual person.

The desire to be young, fit and virile forever would be a very great temptation to many if not most of us. While the movie doesn’t touch in this, simulated combat, historical simulations, etc, could also make use of this technology. What would movies be like if you could actually cut off heads and limbs in a fight scene? Would the Roman coliseum once more splash blood in the sand, even if fake? We may someday know the answers to those questions.

One of the dangers of space travel is the possibility that a tiny little rock, hurtling through space at extreme speeds, might just punch a hole through something important. This causes the story to unfold in Passengers, as one man’s hibernation chamber is accidentally opened because of a tiny accident.

The protagonist, played by Chris Pratt ends up with two more passengers awake, and one of them is played by Jennifer Lawrence…yes this is a love story set in space. While there are a lot of interesting technologies in the movie, we’re only going to look at how gravity effects function, because this movie got a lot of them right.

In many movies they seem to forget that zero gravity means that anything that starts moving, keeps moving. In many instances key plot points revolve around the opposite, which sometimes ruins the show. In the instances that two of the characters go outside the ship in tethered suits, they behave the way they should. When they are tethered together and are floating apart, when they reach the end of the tether both of them are bounced back towards each other. It’s almost as if somebody actually paid attention to how zero gravity works before writing the story!

The most interesting gravity effect happens when the giant ship stops spinning while Jennifer Lawrence is swimming in a small pool. The water drifts up as the artificial gravity ceases, and some of it sloshes around until the entire pool is a giant droplet of water floating in the center of the room. Jennifer Lawrence can’t get out, she’s at the center of the bubble of water and her frantic motion doesn’t propel her to the surface of the bubble.

This scene is debatable, and the debate has been going on all over the internet, surprising in a movie that didn’t exactly set box office records. Some claim that swimming motions should’ve immediately moved her to the surface. Others believe that the scene was accurate as depicted, and there are physicists on both sides. There are debates as to how the water reacted, whether the cessation of motion would’ve caused it to have partial gravity for some of the time, and how quickly the water would collect into a bubble, or whether it would at all.

The debate is itself evidence that the scene is scientifically plausible. There would be no debate at all if it weren’t at least possible, which puts Passengers well ahead of the curve.

As AI and VR become more and more popular, and as computers connected directly to the brain become a thing, the simulations that were once popular in Science Fiction are edging closer to reality. The premise of The Thirteenth Floor is the construction of a simulation of 1940s Los Angeles, populated by autonomous AIs who act like real people, and are capable of learning.

One thing this movie gets right is the number of servers needed to hold the simulation—they’ve got a whole data center floor dedicated to it. The servers are pretty far apart, and look a lot spiffier than most data centers, but there are a lot of them and the storage considerations are adequate, if a bit dated now.

The real-seeming simulation is coming closer all the time. There have already been commercials starring dead actors, and little by little the line between reality and simulation is blurring. In the movie it blurs entirely, so that nobody is sure what is real and what is not. This is not as far fetched as it sounds; consider the girls who tried to murder a friend to save themselves from Slenderman.

It’s normal for fantasy and reality to be blurred together by children, but in adults it becomes a problem, if not a serious catastrophe. An adult who doesn’t know where imagination ends and reality begins tends to end up on medication or incarcerated. In The Thirteenth Floor it gets even weirder. The AIs become self aware, and some of them learn the truth that they live only as a conglomeration of bits in a computer.

The scientific plausibilities come with a loaded fantasy element, however; translating a mind into and out of a computer remains whole science fiction, not science. At least for now…

One of the more interesting science fiction movies is Gattaca, in a near future where space exploration is well advanced but there are no scenes of space ships hurtling towards other planets. We see the launches, but nothing more. The larger change is in the science of genetics; a genetic profile is available at a kiosk from a bit of saliva, and almost everyone is genetically engineered to preclude most genetic defects.

Ethan Hawke plays Vincent, born naturally, without any genetic enhancements. He has a congenital heart defect and a predicted lifespan of just over 30 years. However Vincent has a dream—he wants to go to space. Because of his genetic defects, he is relegated to janitorial work, for all discrimination is no based on genetics.

This scenario is quite plausible scientifically, because it’s already practiced. We may not be able to discriminate with the precision of the people in the world of Gattaca, but we do it all the same. Genetics is the foundation of most of our discriminatory impulses, whether consciously or not. Race, sex, ethnicity, beauty and intelligence are all determined in large degree or entirely by our genetic heritage. In this future society, however, nobody feels ashamed of their discrimination, because it is based on verified science. It’s cool to despise your proven inferiors.

However Vincent proves them all wrong. Despite his inborn deficiencies, he manages to succeed among the elite using a lot of tricks to fool the genetic tests. There is an age-old debate in scientific circles (and more so in psychological circles) between nature and nurture. Those who believe that genetics entirely decide who and what we are fall on the side of nature…no amount of nurture can ever make anyone more than their genetic heritage decides.

Gattaca falls into a third camp. Nature failed Vincent, and nurture failed him, because his parents and society did nothing to encourage his dreams, indeed, quite the opposite. Gattaca makes the argument that an individual can, through drive, hard work, and sheer willpower, overcome the inherent disadvantages accumulated through both nature and nurture.

This is a philosophical argument, rather than a scientific, but the fact that we today discriminate because of perceived flaws originating in the genetic code could easily morph into the kind of self-righteous, ‘scientifically justified’ discrimination that Gattaca depicts. After all, it’s already happened. The National Socialists had science on their side. Just ask them. 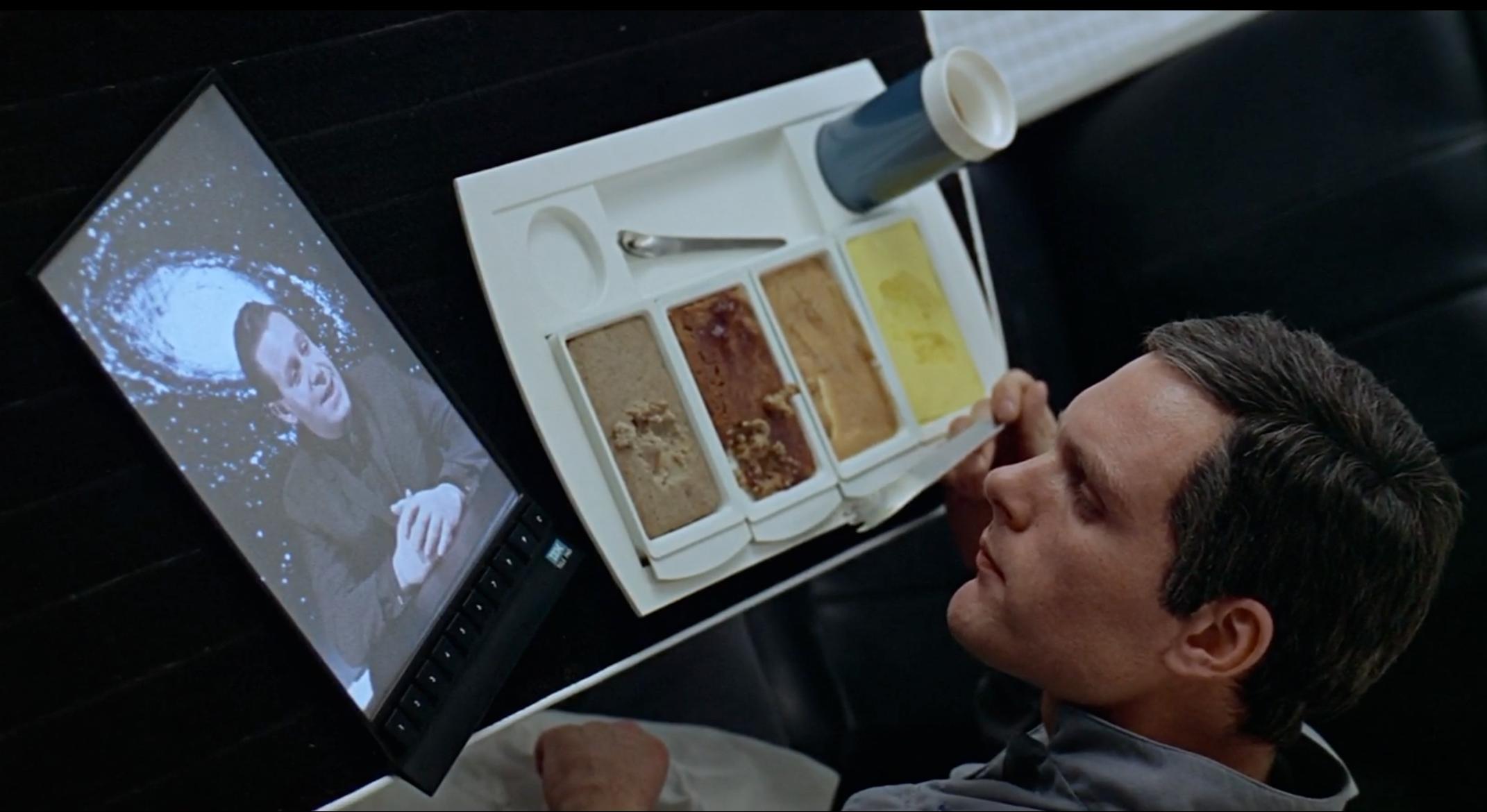 The granddaddy of all realistic space travel movies is 2001: A Space Odyssey. The timing was wrong, of course; here it is 2017 and we still can’t get on a shuttle to the moon. The lack of sound in space, the flight attendant wearing sticky shoes to walk up the wall and into the cockpit, the centripetal force of the Discovery One, all of these remain plausible to this day, almost 50 years later.

The depiction of how centripetal force works in the living quarters of the Discovery One remains the best ever. Later movies use the same concept, but don’t demonstrate it so well. This is one particular thing that 2001: A Space Odyssey gets absolutely right, though the direction of travel is not mentioned in the movie.

Actually the list of things that this movie gets right is quite long, but the scene with the rotating section of the command module still stands out. The ‘hamster cage’ stage built for the scene was the most ambitious ever, and it presents a very realistic and scientifically sound application of space travel technology.