“You don’t make up for your crimes in the church. You make them up in the street.” These words, spoken by Martin Scorsese himself, before they segue into the thunderous drums of The Ronettes’ “Be My Baby,” sum up the philosophy of the movie.

Harvey Keital’s Charlie is a Catholic, but he is also a member of the Italian Mafia. This complicated way of living is made even more complex by the entrance of his brother, a firecracker of nervous energy played excellently by the up and coming Robert De Niro. The result was one of the most revolutionary films in American cinema.

One of the major innovations Scorsese deployed was the use of popular music from the time. Using bands such as The Rolling Stones to soundtrack his character’s emotions was not the norm at the time; and felt highly fresh before such tropes quickly moved over into the realm of cliché.

Additionally, shooting on a limited budget, he used handheld camerawork, location shooting and non-professional actors to complete the dingy New York vibe (famously shot in Los Angeles). This was the film that announced Scorsese onto the world-stage, and we have all been attentive to his work since.

When the typical audience member is asked to list the hallmarks of a typical Scorsese movie, The Age Of Innocence isn’t a work that naturally comes to mind. Nonetheless this period adaptation of the novel by Edith Wharton matches the source material to a T, spinning out a tale of restrained love that is as timeless as they come. At the centre of it all is a brilliant performance by Daniel Day-Lewis, playing Newland Archer with such authority it is as if we are watching a documentary about his life.

They may not be the gangsters of Goodfellas, or the hustlers of Wolf of Wall Street, but the New York high society of The Age of Innocence are just as ruthless in their own way. Newland Archer finds this out the hard way when he falls for Countess Ellen Olenska (Michelle Pfieffer). The only problem; he is already engaged to May Welland (Winona Ryder). The result is a heartbreaking portrait of a society that is rigidly bound by its code.

Yuppie life gets a wicked lashing in After Hours, which takes a comic conceit — a man gets stuck in the wrong part of town in the darkest hours of the night, and meets some oddball characters along the way — and uses it as one of the purest distillations of Scorsese’s unique direction.

A true visual extravaganza, it hurtles from set-piece with almost a breakneck velocity. From losing his twenty dollars to being chased by a group of angry punks, nothing for the protagonist, played to perfection by Griffin Dunne, seems to be going right. The only question is whether he can last to survive the night.

It is a prime example of how to do more with less. Made as Martin Scorsese was trying to raise funds for his passion project The Last Temptation Of Christ, After Hours has long been considered one of his minor efforts. However, this isn’t the case: this seemingly small film is teeming with endless invention, showing how for Scorsese, his directorial chops can transform almost anything into a masterpiece.

Scorsese’s long-awaited return to the gangster film eleven years after Casino, The Departed was the film that finally saw the director awarded with Best Picture and Best Director at the Academy Awards. Taking place in modern day Boston, this remake of Infernal Affairs saw Scorsese infuse the source material with a deep pervasive Irishness and Catholicism, spitting out a story of deception and intrigue that lingers long after the curtain comes up.

It saw DiCaprio as a cop posing as a gangster, and Matt Damon as a gangster posing as a cop. The aim of the game: to get information on the other side. Yet this is no straightforward gangster tale, Scorsese using the conceit to pose deep questions about the manner of loyalty and identity, and to stage some extraordinary, edge-of-your-seat sequences.

With many twists and turns, and a scene-stealing performance from Mark Wahlberg as the world’s mouthiest cop, The Departed ranks as Scorsese’s best film of the 00s.

In terms of all-time performances, few can compare with Robert DeNiro’s portrayal of Jake LaMotta in Raging Bull. In order to prepare for the role, he gained an enormous amount of weight and studied the ins and outs of boxing. As a result he doesn’t so much act as become an entire other person. This stark tale of jealousy, which works as an Othello for modern times, is complemented by the black-and-white cinematography, giving it a ragged and intense vibe.

It is a boxing film unlike any other, using its conceit as a means to push the limits of threatened masculinity. Yet for the boxing scenes themselves, Scorsese cleverly never lets the camera leave the ring. This gave them an unmatched brutality that easily outdoes any of the Rocky movies. Easily one of the best films of the 80s.

With Taxi Driver, Martin Scorsese announced himself not only as one of the saviors of American cinema, but an arthouse extraordinaire on the level of Antonioni, Fellini and Bergman. This fever-dream of Manhattan’s underbelly, anchored by one of Robert DeNiro’s best performances, saw Scorsese utilise the manic energy of Mean Streets into a profound thesis statement about the nature of loneliness and the legacy of the Vietnam War.

Based upon the screenplay by Paul Schrader, the movie concerns a deeply unwell man who spends his evenings as a taxi driver. It is from behind the wheel of his vehicle that we learn his views about the world. He is convinced that the New York of the ‘70s is a cesspool, and he alone is the one to save it from its filth. An intriguing subversion of the white knight trope, Taxi Driver is the best movie of Scorsese’s early period. 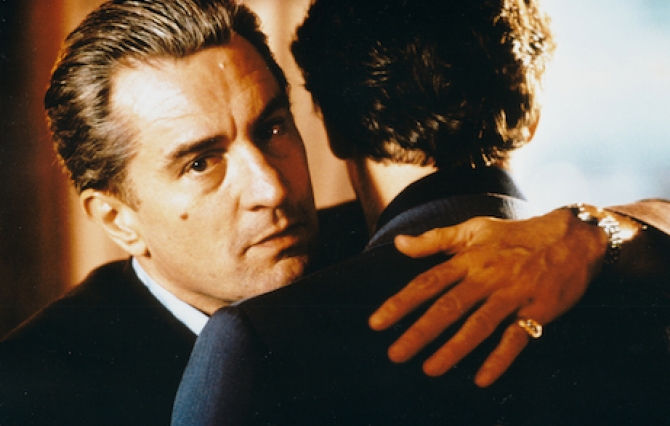 “As far back as I can remember, I always wanted to be a gangster…” From those opening words, a legend is born. Depicting the rise and fall of Mob stooge Henry Hill, Goodfellas is the most entertaining gangster movie of all time.

For the film, Scorsese seemingly assembled every recognizable Italian-American actor there is: from the greats such as Joe Pesci and Robert DiNiro, to stalwart character actors such as Tony Sirico and Lorraine Bracco, the cast elevate the film into the very apex of Italian-American Cinema.

It has more iconic moments than most directors can hope for in their entire filmography. From the “You think I’m a funny guy scene” to Hill’s coke-fueled helicopter nightmare, to the all-time tracking shot into the Copacabana scored by The Crystals “And Then He Kissed Me,” no other film has ever quite shown how varied the criminal life can be.

An influence on everything from Tarantino to The Sopranos, Scorsese completely reinvigorated the genre; it’s a shame no one else has been able to match it since.

At the centre of it all is Leonardo DiCaprio’s no-holds barred performance as Jordan Belfort. Marking his fifth collaboration with the director, it is the best combination between the duo, something that vaulted the actor into the pantheon of the greats. With a mixture of physical comedy, filthy verbal sparring (most notably with Jonah Hill) and amoral opportunism, his portrayal of Belfort is the perfect correlative to Scorsese’s freewheeling style.