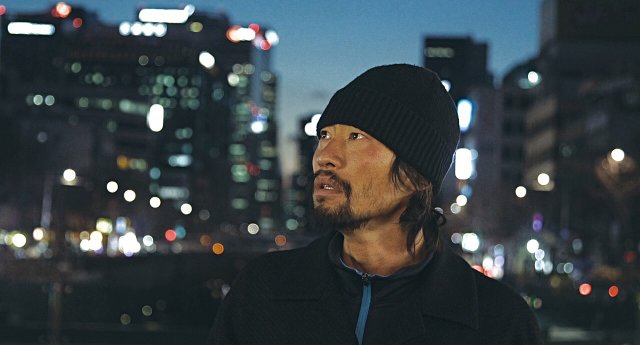 The net of a poor North Korean fisherman gets caught in the engine of his boat, and he accidentally drifts into South Korea. The authorities arrest him and start interrogating him brutally, and they also try to make him defect. His situation is worsened by his main interrogator who seems to harbor an intense hatred for North Koreans. On the other hand, a younger agent assigned to him is much kinder and even helps him with his situation.

Eventually, he manages to return to his country and family, but he has to face the same treatment there as well.

Kim deals with the issue of the two Koreas, making a point of demonstrating that, despite the financial differences (rich South, poor North), the ideologies and the practices regarding the particular concept remain the same, with both countries being equally inhumane. However, his point is presented rather early in the film, which seems to lag much after a fashion.

On the other hand, Ryoo Seung-bum as the fisherman, Kim Young-min as the “villain”, and Lee Won-geun as Oh Jin-woo provide quite good performances that actually carry the film. 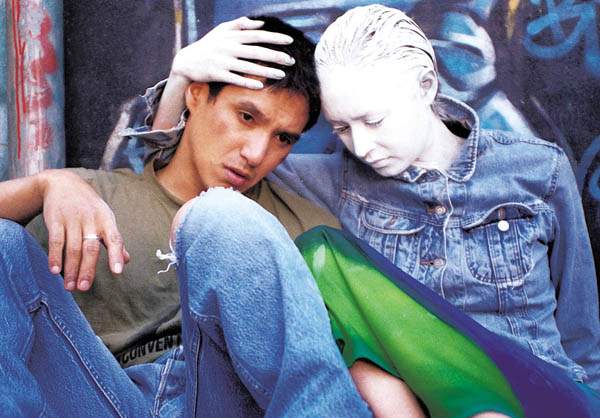 Kim’s second film takes place in France, where he studied and worked as a street painter, and the story revolves around three Koreans. Hong-san is a former soldier of the North Korean army who dreams of going to Paris and signing up in the foreign legion. On the train to Paris, he meets Laura, a Korean whose boyfriend has her working at a club at the red light district in Paris. When the French police arrive at their compartment, Laura helps him, and he eventually falls in love with her.

Chong-hae is a small time crook and aspiring painter who spends his time in a studio for Korean artists, where he steals their paintings and sells them on the streets. At some point, he meets Corinne, an illegal Hungarian immigrant, and after he helps her with some men who assault her, the two of them form a relationship. Through a series of almost surreal events, Hong-san and Chong-hae end up living together, through a very peculiar kind of friendship.

Inside a setting of almost constant violence, Kim directs a film that focuses on the lives of Korean immigrants in Europe, as well as love, and male friendship. The world he creates, though, is an onerous one with few moments of happiness, where dog-eat-dog is the rule, and trust is nowhere to be found. The shocking scenes are rather graphic, with the one with the frozen fish standing out, although Kim had not yet completely found his style in this movie.

Despite the presence of many characters, the central character remains Chong-hae, a man who struggles with his treacherous nature as he seems completely ignorant to the concept of friendship. Jo Jae-hyeon gives an impressive performance in the role. 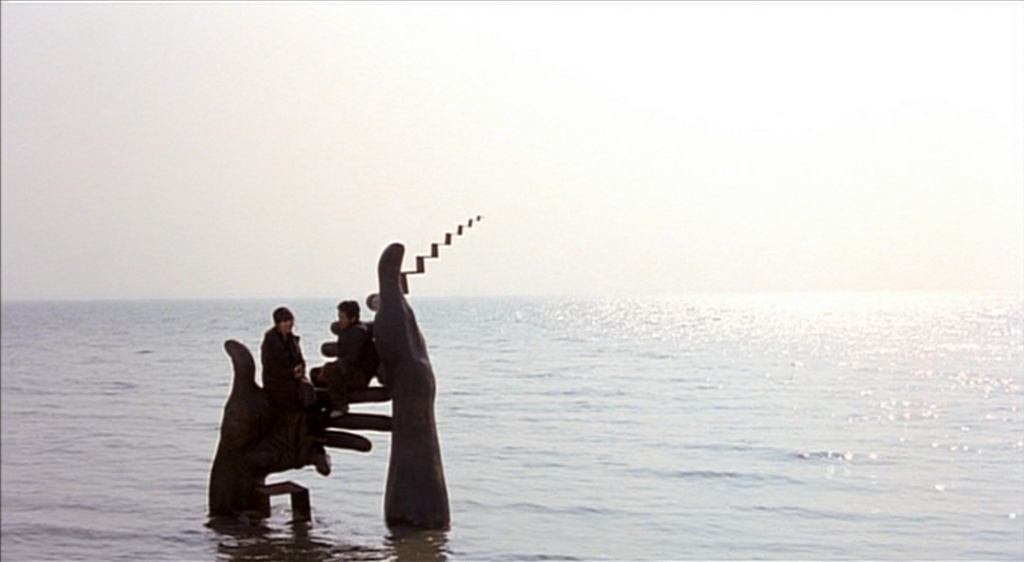 Seh-hee and Ji-woo are deeply in love with each other, but Seh-hee is worried that Ji-woo may soon grow tired of her, and she becomes jealous of him. Soon, she disappears and proceeds to have plastic surgery that completely changes her face. Ji-woo desperately tries to find her for six months until he finds another girl he feels he can love. At the same time, he starts receiving messages that suggest Seh-hee is back and he realizes he had not gotten over her.

Kim uses the concept of plastic surgery, which he seems to despise, to present his opinion on the theme of “what if we could change ourselves by changing our appearance?” His take, however, goes much further than this, as he examines the responses of other people in this change, and in the end, the concept of how other people perceive us, particularly the ones we love.

His narrative is rather abstract, to the point of becoming dreamy, and the film seems to lose its coherence after a fashion. In terms of cinematography, though, “Time” is masterful, in a tendency that finds its apogee in the unusual sculptures on the beach, and particularly the one with the ladder between the hands. 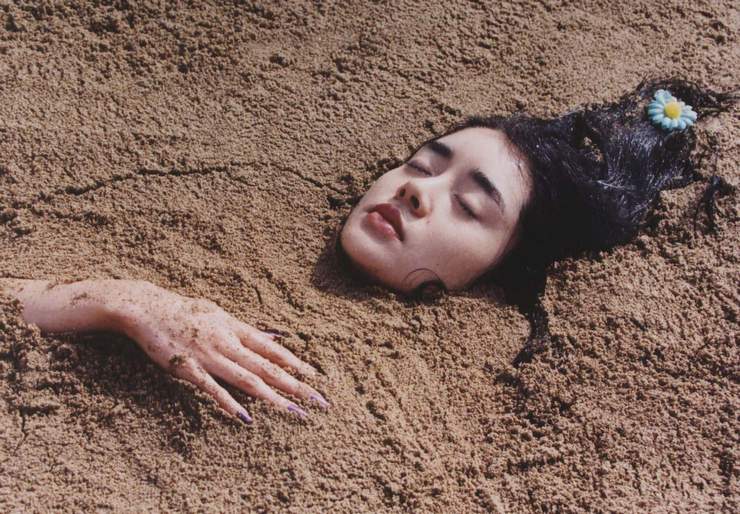 Kim deals with one of his favorite themes – prostitution – in another low-budget film, which was the one that made him known outside the borders of Korea, through its screening at the Karlovy Vary Festival.

This time, he examines the relationship of Jin-ah, a 24-year old prostitute who gets a job at a seaside motel, with the members of the family who run it. Their behaviour towards her varies. The father and son want to have sex with her, and they fall in love with her.

The daughter hates her because she represents how disgraceful the family business is while the mother, who is also the boss, treats her typically, as an employee. She, on the other hand, carries many crosses, but the only thing she seems to search for is a family.

All the trademarks of Kim’s cinema are here – few dialogues, brief sexual scenes, violence, and a permeating sense of depression. At the same time, and despite the miniscule budget, he manages to present a number of images of extreme beauty, even in this setting. 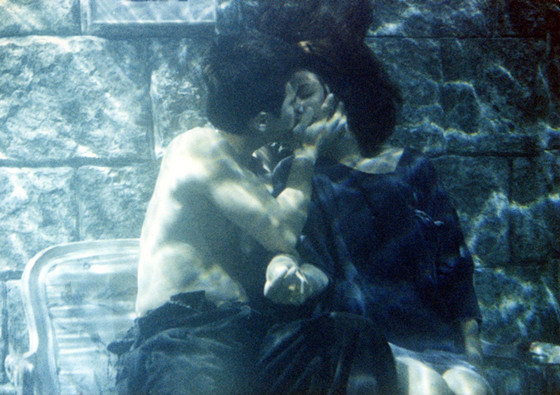 Kim’s debut was a definite forerunner of what was about to follow, as the enfant terrible of South Korean cinema did not hold any punches in the depiction of his extreme themes.

‘Crocodile’ is the nickname of a very violent and ill-tempered homeless man, who lives under a bridge over Han River. He stays there with two “sidekicks”, a young boy named Yang-byul and an old man nicknamed Grandfather, who seems to be able to fix anything that comes across his way, from motorcycles and coffee machines, to wounds that need stitching.

Crocodile makes a living in two ways. He has Yang-buyl selling chewing gum in a park, and he steals the belongings of people who commit suicide by falling in the river. However, most of the money he wins he gambles away, playing cards in a suspicious parlor. One day he saves a woman, Hyeon-jeong, who falls into the river, and being the beast he is, he immediately starts raping her. Despite his treatment of her, she decides to stay with them. When Crocodile tries to meddle in her life story, the whole gang gets into deep trouble.

Kim directs another violent but meaningful film, as he focuses on his characters, particularly Crocodile. The main hero of the movie symbolizes the hopelessness of the world, since, despite all his efforts, he cannot surpass his own nature, which has him trying to rape women and gambling away all the money he earns, and being beaten in both cases.

In that fashion, his violent temper is somewhat justified, but Kim does not let the audience like him even for a minute, since his brutality is addressed toward a woman, an older man, and a child. Furthermore, whenever he has to face an opponent his own size and age, he ends up beaten, in a repeated act that proves he can only direct his violence toward the aforementioned, in this cruel, dog-eat-dog world. Lastly, when he decides to act nicely, he is punished even more, and so are his “friends”. 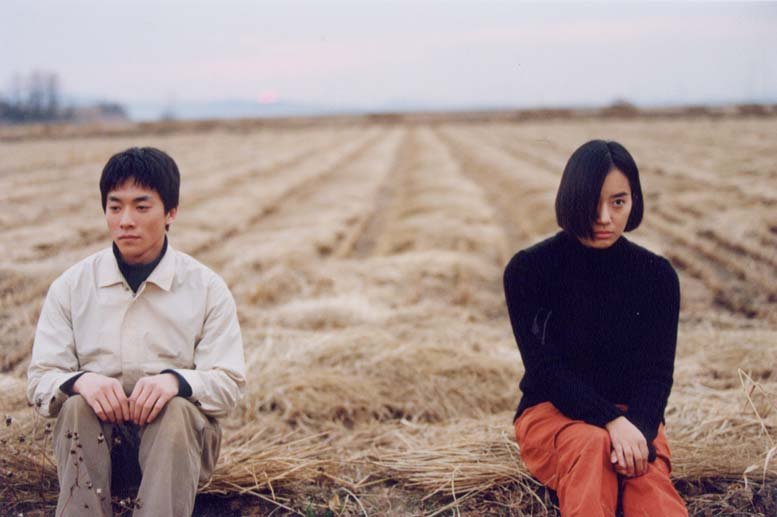 The slightly autobiographical story takes place in 1970, in a rural town near a US military base. The inhabitants of the town include Chang-gook, a half-breed who works for Dog Eyes, killing dogs whose meat he sells to local restaurants. According to his mother, his father is an African-American, who they are going to visit eventually, in the US.

Furthermore, she keeps sending letters to him, all of which are returned with an “ADDRESS UNKNOWN” sign on them. Chang-gook feel disgraced by his mother’s behaviour and as he finds himself a victim of racial behaviour, he unleashes his anger on her. His situation becomes even worse when his mother’s new boyfriend witnesses his behaviour.

Ji-heum is a quiet, timid man who is in love with Eun-ok. However, she stays away from everyone, due to her deformed eye. One day, an American soldier offers to pay for her plastic surgery if she becomes his girlfriend.

Kim directs a utterly realistic drama, not censoring himself in any way, particularly in the violent scenes, most of which are rather graphic. Inside this inhumane setting, Kim presents a distinct message: War has no winners, just physical, mental, and social consequences. All the characters in the film suffer; from nostalgia for the past, from the government’s treatment, from their place in society, and from a longing for their country. 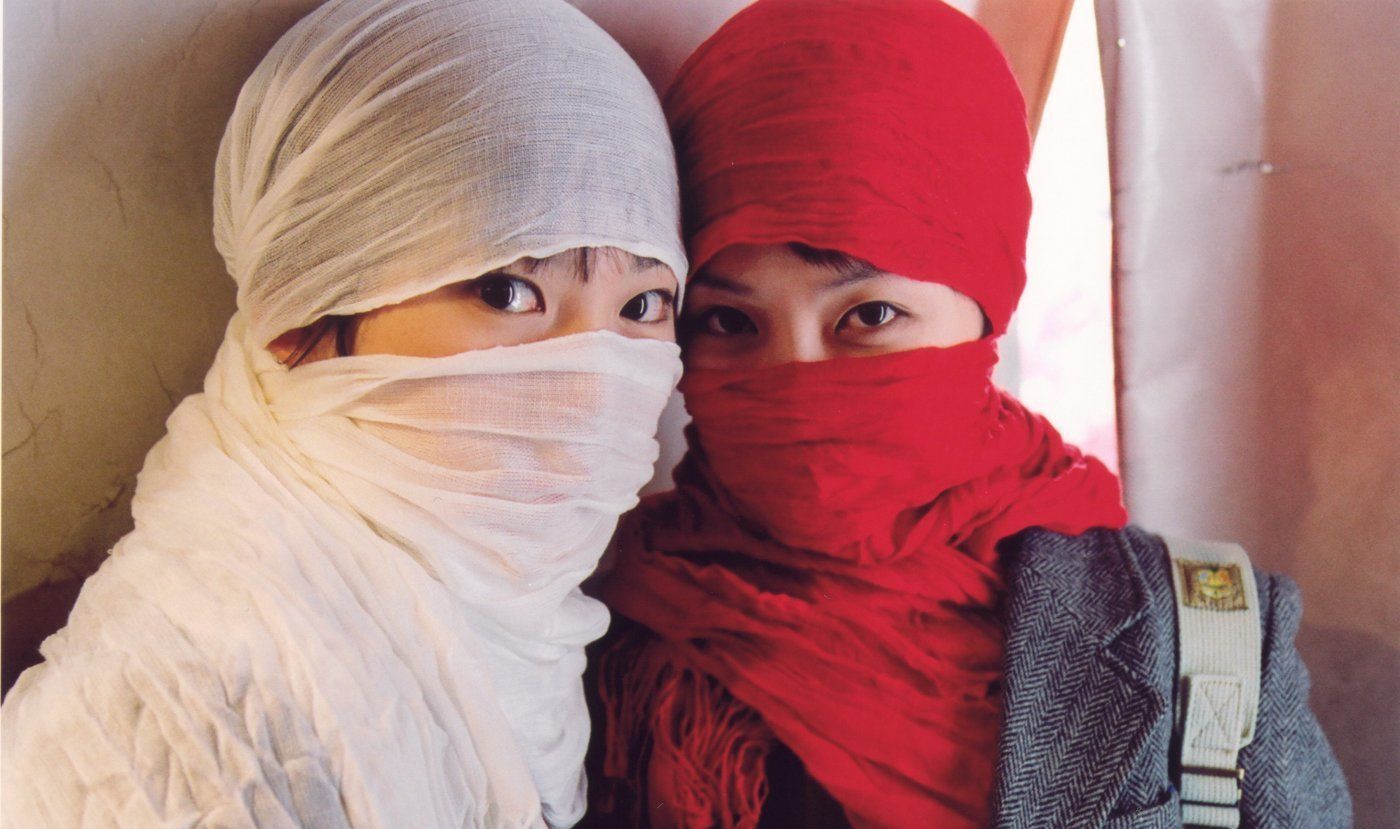 Two high school friends, Yeo-jin and Jae-young, are planning to travel through Europe together. In order to raise the money for the trip, Jae-young becomes a prostitute and Yeo-jin functions as her pimp, getting her clients and guarding her during the “sessions”.

One day, while Yeo-jin is not paying attention, the police raids the house where Jae-young is working, forcing her to jump through a window in order to avoid arrest. In her effort, she is injured badly and is transferred to the hospital. While there, she asks her friend to bring her favorite customer to the hospital.

He, however, asks Yeo-jin to have sex with him if he is to follow her. She accepts, not having any other choice, but when they arrive atf the hospital, Jae-young is already dead. The succession of events shocks Yeo-jin, who decides to search for every customer her friend has slept with and return them their money, after she has sex with them.

The results of her decision are far more violent than she anticipated, particularly when her father finds out what she has been doing.

“Samaritan Girl” is one of the least violent films from Kim, although the fact does not detract from the cruelty of the movie, which is rather permeating. In this setting, Kim examines a phenomenon that is mostly witnessed in Japan, where schoolgirls have sex with older men to raise money to buy expensive clothes, smart phones, etc.

Obviously, Kim takes the side of the girls, presenting them as too young to understand the implications of their actions. On the other hand, he pulls no punches on the depiction of the particular men, who are presented as despicable human beings, a fact stressed even more because most of them have daughters of that age. 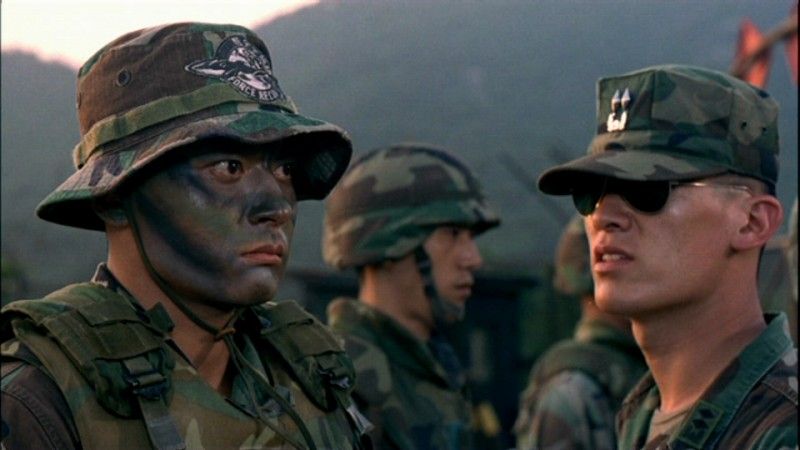 Corporal Kang, a member of the coast guard, has been brainwashed so much by his superiors that he has become obsessed with finding and killing a North Korean spy during his patrols, while military code has become his bible.

When an unfortunate local couple crosses the forbidden line, Kang unleashes his whole wrath, emptying his gun and even throwing a grenade towards his target. The man from the couple dies completely dismembered, and the girl, Mi-yeong, loses her mind. However, despite praise from his higher-ups, Kang does not seem to be in a better situation.

Kim uses many crosscuts to highlight the deteriorating psychological state of both characters after the incident, and in that fashion, he presents a distinct political message. The military creates more violence than it deters, and through this concept, in essence, it justifies its existence. Kang becomes the symbol of this comment, and Jang Dong-gun plays the part to perfection.