Deakins has stated that the arrival of the train during the famous Blue Cut train robbery sequence is one of the greatest moments in his long career. His work on The Assassination of Jesse James by the Coward Robert Ford is career defining, as the images he created stay with the viewer long after the film has ended.

The film was released the same year as contemporary Western No Country for Old Men, which Deakins was also DP on. This resulted in Deakins being nominated for two different films for his cinematography, yet he still failed to win against Robert Elswitt for There Will Be Blood (2007). Between 1995 and 2016, he has been nominated for an Academy Award thirteen times without ever winning. This film is essential viewing for its cinematography alone as it is a master class in showcasing the importance of every frame within the overall sequence of images.

Every shot is stunningly captured as if it were a painting. The blurred effect around the frame in many of the shots creates a dreamlike and hazy effect, reinforcing the idea that this story is a distant memory from the past. Deakins himself said it was to create the feel of “an old-time camera”.

The film grain adds to this old photographic look, as Deakins emphasises that this is a period piece. The inevitability of what is to come is captured through this effect, creating a melancholy feeling. The time lapse sequences used provide contemplation on time passing, as the years pass and the film gets closer to reaching April 3rd 1882. The dim lighting subtly hints at the doom that is closing in on both Jesse James and Robert Ford as the film creeps closer to its climax.

As with many Western films, the setting becomes its own character. In The Assassination of Jesse James by the Coward Robert Ford, the vast, empty landscape exists as a space where any man is capable of committing acts of violence. 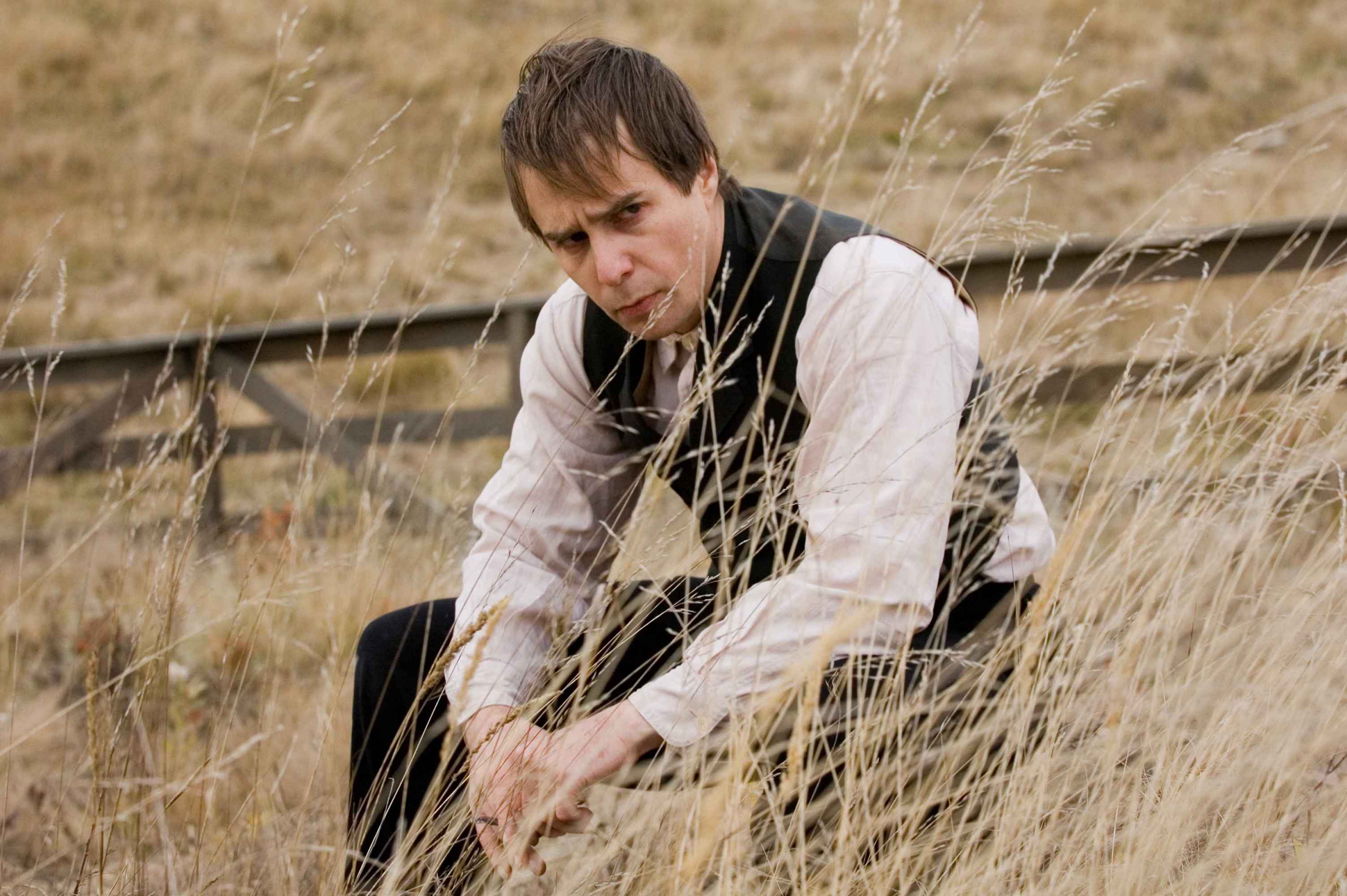 The score of the film is exceptional in both the heightened moments of intensity and the melancholy and tranquil scenes. It is slow and dread-inducing yet there are moments where the fiddle kicks in and it becomes more upbeat and carnivalesque.

Like Deakins’ images, the score stays with you long after the film has finished. It is evocative and haunting as it is tinged with the loss and regret encapsulated by Robert Ford by the end of the film. It is essential to the narrative and the melancholy but unsettling way the story unfolds.

When the score isn’t ruminating, the silence is palpable and adds to the intensity of the epic landscape that the story inhabits.

The moment which the viewer has been waiting for finally arrives with a warning on screen: April 3rd 1882. The scene begins and there is a noticeable stillness. Flecks of dust are captured by the camera just before Jesse James mutters his final words: “Don’t that picture look dusty”. As James walks slowly towards the picture on the wall, the score kicks in as the shot zooms into the painting, signalling his inevitable fate. Close ups of Robert Ford in this scene show the tears in his eyes as he prepares to carry out what the title states.

For his powerful acting in this scene alone Casey Affleck deserved to win the Academy Award. As he prepares to shoot, the camera closes in on Ford as he appears visibly moved and hesitant, until he quickly becomes composed and pulls the gun up. The viewer of this scene witnesses the action from the point of view of Robert Ford, as the shot shows the gun pointing towards James from behind. This allows for the viewer to contemplate sympathy for both James and Ford; one a victim of legend and the other a victim of false idolism.

Dominik’s decision to include James seeing the reflection in the picture of Ford about to shoot is poignant and suggests that James is accepting of his fate. The moment the gun goes off the music begins to stop, to add silence and room for contemplation after this shocking moment of heightened action. Later in the film the narrator states that Robert Ford “had no real memory of the shooting”, as if it were an out of body experience, reinforced by Deakins’ hazy and dreamlike vignette effect. The moment is like a forgotten memory for Ford, as if he can only picture fragments of his past self and what he’d done.

Before the scene, there is a moment where it is clear to the viewer that something within Ford has changed:

“I’ve been a nobody all my life. I was the baby; I was the one they made promises to that they never kept. And ever since I can recall it, Jesse James has been as big as a tree. I’m prepared for this, Jim. And I’m going to accomplish it. I know I won’t get but this one opportunity and you can bet your life I’m not going to spoil it.”

Ford has finally given in and realised what he needs to do to escape from being the one in James’ shadow. He seizes the opportunity and doesn’t think about the regret he will have for killing one of the only people he looked up to. He longs for the fame and celebrity which surrounds James in his life yet the irony surrounding this is that he never achieves it.

1. The devastating effect of the inevitable climax

The feeling of inevitability is evident throughout The Assassination of Jesse James by the Coward Robert Ford. After Robert Ford has betrayed and murdered Jesse James, it is his regret for what he has done which makes the events of the final moments of the film all the more hauntingly uneasy as he remarks:

“You know what I expected? Applause.”

Yet, this is far from the reaction he receives from those who viewed Jesse James as a legendary figure. The tragedy of the film lies in this vision of Jesse James and the life he lived not living up to Ford’s expectations. Ford expected to take on the life that James left behind in his death, yet he was shut out by society for killing the man they admired. However, this was only the image of the man and in real life he was in fact flawed. The reality is haunting, that fame and glory only evoked loneliness and despair.

“There would be no eulogies for Bob, no photographs of his body would be sold in sundries stores, no people would crowd the streets in the rain to see his funeral cortege, no biographies would be written about him, no children named after him, no one would ever pay twenty-five cents to stand in the rooms he grew up in. The shotgun would ignite, and Ella Mae would scream, but Robert Ford would only lay on the floor and look at the ceiling, the light going out of his eyes before he could find the right words.”