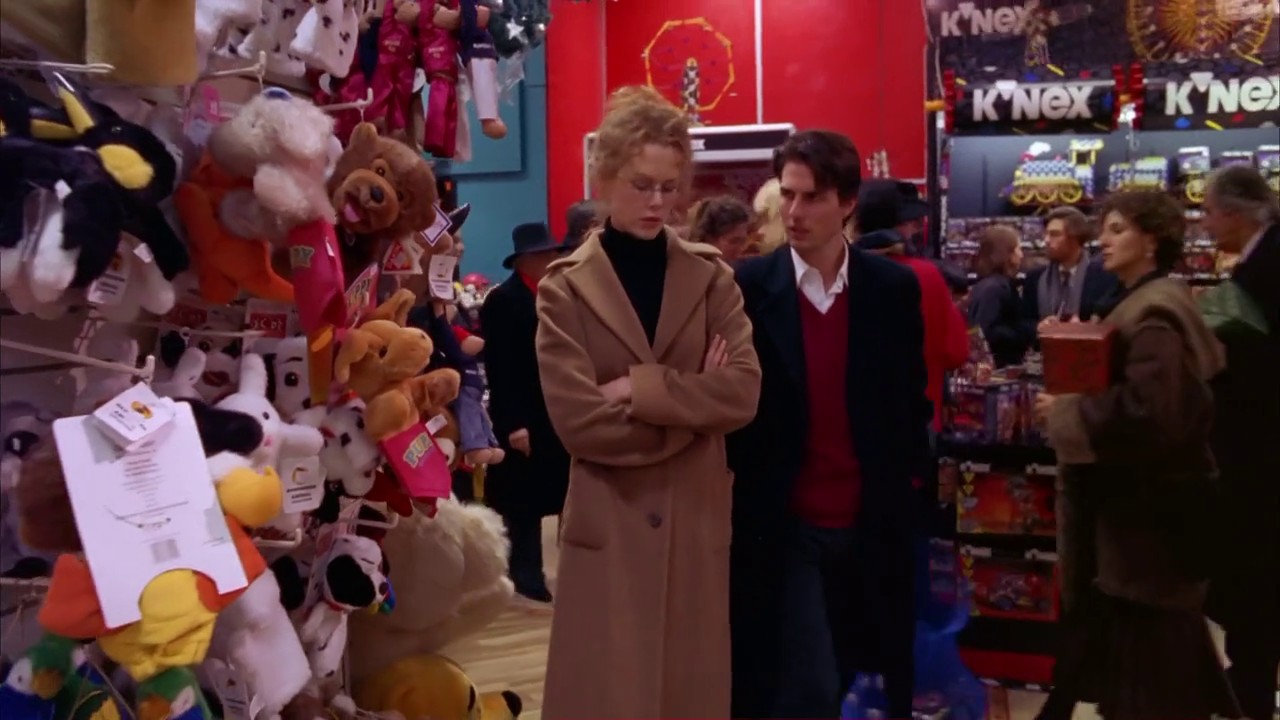 By the time “Eyes Wide Shut” was made, Tom Cruise had become the world’s biggest star. His exhibitionist, enlivened work in “Jerry Maguire” had cemented his image among film fans as an endearingly visceral performer. In Kubrick’s masterpiece though, he is tasked with making his character both an object for the audience and the eyes through which they experience the nightmarish events of the film. The extraordinary double-whammy of that job is achieved spectacularly by Cruise.

He internalizes the character’s confusion so completely, that it manifests itself in ways that are at once subtle and profuse. His performance reaches a high when he is at the morgue staring down at Mandy’s body.

In a matter of moments, Cruise makes us aware of the nightmare that he has witnessed that has lead him to this, but also exploring the stillness of death, and how much has his presumptive attitude for nearly everything in his life cost him, and if he has ever truly lived. Francis Ford Coppola believed the film was about death when he first saw it. It wouldn’t be ludicrous to presume this scene might have caused him to believe that.

But a far more superior performance is that of Nicole Kidman, whose screen time is limited, but the scope of the few scenes she’s in is equivocally expansive. Aside from the stunning desperation she portrays in the party scene in the beginning of the film, there’s this intangible air of hypnotic, transporting despondency when she relays to Bill her fantasies in two full-bodied monologues, which might be some of the most daring, most enrapturing things Stanley Kubrick ever did.

Of course, the supporting performances are a class act in themselves. From Sidney Pollack’s studied, contained work as Victor Ziegler that both mirrors and diverges from Cruise’s rendition of Bill at various points in the film, to Leon Vitali as the voice of ridiculously intimidating “Red Cloak”, everyone is expending the film’s thematic dispositions with effortlessness and trademark Kubrick aplomb. Even Alan Cumming’s hotel desk clerk is requisitely off-kilter. 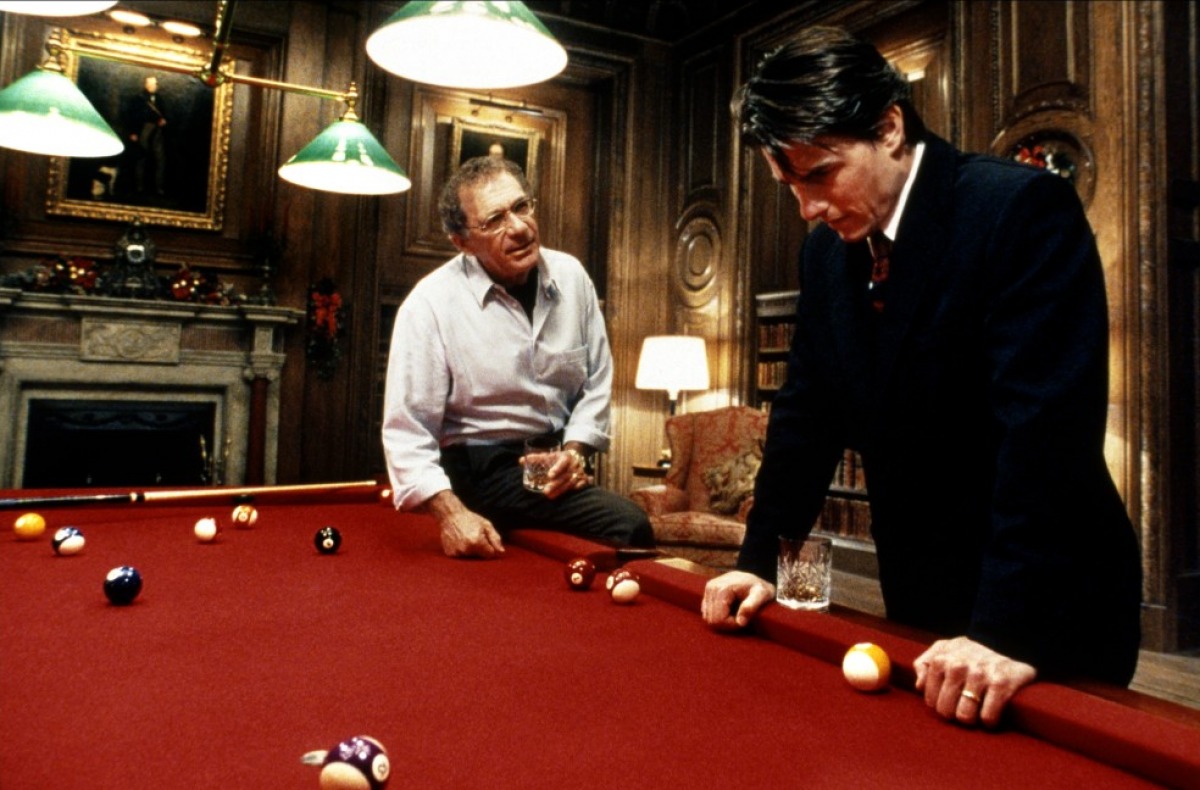 The various sets of the film all stand as motifs to bigger ideas than a viewer can gauge from a single viewing of the film. Kubrick spent months looking at photos of various locations in the UK to decide which ones to emulate and which ones to use in their existing state. His sets were always hidden with clues to the ideas he wished to explore, forming parts of the frame that would almost be invisible, if not paid the right attention.

In the beginning of “Eyes Wide Shut”, we get a glimpse of the Harford home as we see Bill and Alice leaving for the party. The house painted almost all in white, barring the pieces of furniture that are bursting with alarming, sumptuous quantities of red. This evokes Ingmar Bergman’s desperately desolate masterpiece “Cries and Whispers”. It signifies that life here is startlingly mundane, but something is forcefully breaking out and it’s only time till it erupts and engulfs everything.

The Zieglers’ house is as stately as they come, with gorgeous lighting and exceedingly high roofs, reminiscent, somewhat, of the ‘Gold Room’ from “The Shining”. There’s also the paintings in Ziegler’s bathroom and the Christmas decorations that effectively convey personality traits without making them blatantly unambiguous.

One of the most frequently cited issues the critics had with “Eyes Wide Shut” was that the streets and buildings don’t look like New York. The film, of course, like all Kubrick projects since “Lolita”, was filmed in Britain. The streets and buildings are partly locations in London that look like New York, and partly recreated studio structures. This, many believed, made the film feel inauthentic.

What Martin Scorsese and many others have since then pointed out is that these faux settings make it look like it’s New York in someone’s imagination. We’re never clearly instructed to believe in everything that happens in the film, and much of it could’ve easily been someone’s dream. The design merely upholds that ambiguity with crisp, authoritative intellect.

One of the most intriguing set designs in the film is the toy shop at the very end. Very much in synch with the color palette of the rest of the film, the store is a bright, deeply ironic explosion of red and forms the backdrop of the film’s wise, final conversation. And isn’t naming the costume shop “Rainbow Fashions” (referencing the line “Where the rainbow ends.” earlier in the film) a nice touch?

Although as per Nicole Kidman, Kubrick had little interest in how the costumes were chosen and the famous dress from the opening scene was straight out of Kidman’s own closet. But when it was intended to communicate significant aspects of the film, the costumes of “Eyes Wide Shut” were some of the most dazzlingly insightful creations in any Kubrick film.

Alice’s dress at the party radiates a stunning emulsification of a classic and contemporary sensibility. But Bill, characteristically, doesn’t even bother to look at it. “You always look beautiful.”, he points out. On a closer look, you’ll discover how subtly the costumes of the party guests maintain the color palette of the film.

These masks are strangely shaped, have eye-pooping colors and shots of the large groups of people wearing them, as though the expressions on the masks are their own, produce a dangerously comical effect. Stripped of their reality, these men and women have now hidden behind these horrific guises, indulging their most deviant desires.

Bill’s own mask was famously designed by emulating the features of actor Ryan O’Neal who plays the protagonist in Kubrick’s “Barry Lyndon”. Unlike “The Shining’s” Jack Torrance and “A Clockwork Orange’s” Alex DeLarge, Barry and Bill are much more silent subjects than what Kubrick was known for.

As Roger Ebert correctly noted, Barry is a man “to whom things happen.” And so is Bill. And that mask he wears is probably more dangerous than any other there, because it makes Bill even more passive then he is and inherently even more indiscernible. 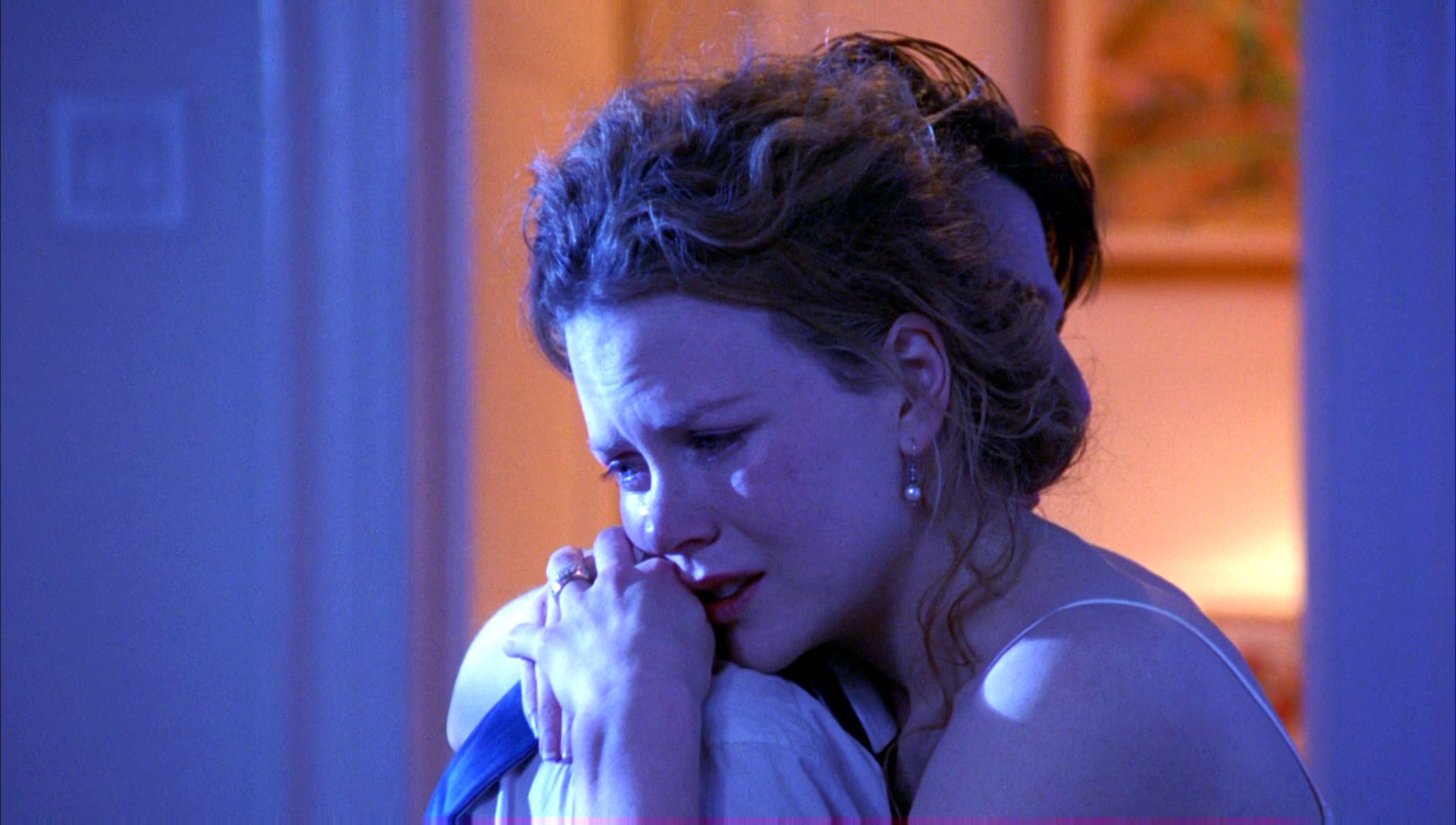 Does the scene feel redundant? Yes. Does it tell something new? Based on how much of a Kubrick film is open to discovery even after multiple viewings, it is more probable than not. Maybe the scene quietly reaffirms Bill’s realization of how wafer-thin the line between life and death is. Maybe it adds another layer to Kubrick’s study of the male sex through Bill’s obliviousness, and how it is gradually being eroded by the events of the narrative. That, is for you, the viewer, to decide.

To many, especially the generation used to the adrenaline-fueled filmmaking of today, Kubrick’s use of zoom-ins would be a cause of impatience with the film. But this is a filmmaker who directs like a composer composes music. When he hits a high note, the more intense it is, the more effective. So when the camera zooms in as Bill reads the news of Mandy’s death, it works only if you have totally immersed yourself in the film and are only relishing the experience.

Because of its peculiarity and subdued ambiguity, the pacing of “Eyes Wide Shut” is relentlessly slow. You are caught in a dream, every single one of your senses is alive and you can’t escape, which mirrors the experience of the man through whom we are viewing everything. It takes complete hold of you, and unfolds with its own certain, assured pace.

Take that scene at Ziegler’s house with the two men talking around the billiards table for instance. The pace is excruciatingly dreary. But each line of dialogue seems perfected to death and the actors’ patient delivery ensures that the tension in the conversation is air-tight till the very end. A scene so bold in its execution could only be pulled off by a filmmaker of Kubrick’s stature.