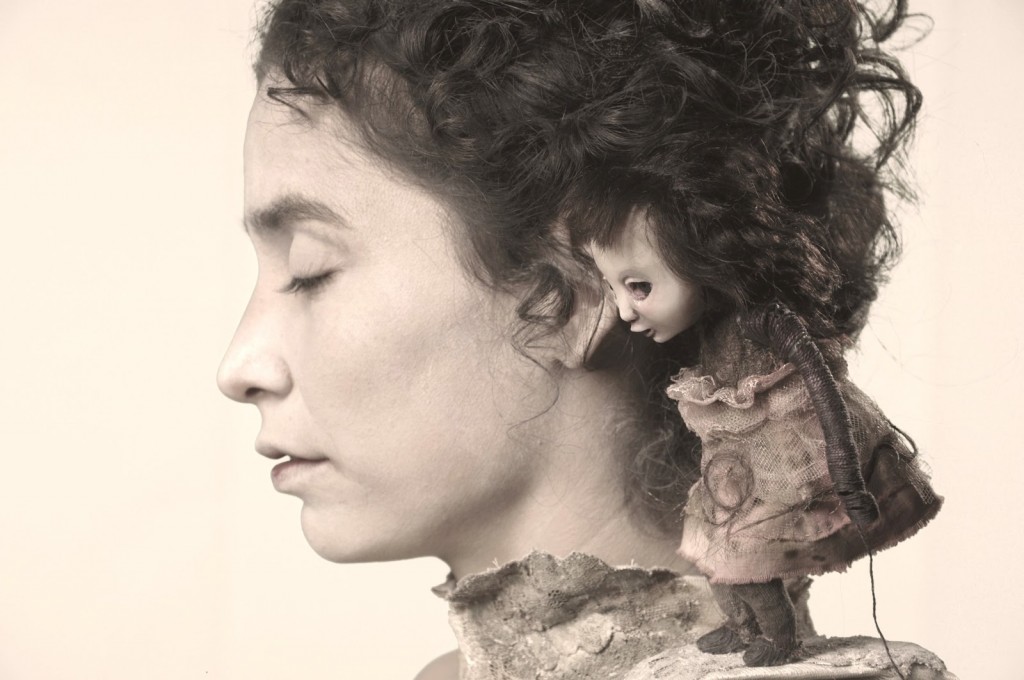 An enigmatic (anti) fairy tale “Black Doll (Prita Noire)” marks Sofía Carrillo’s third film – another sophisticated gothic fantasy which earns its author a spot in the pantheon of top-notch animators. Devised as an eerie good night story, for eight minutes it plunges the viewer into an oneiric universe of two sisters imprisoned in a space-time vacuum.

The role of a titular heroine – the armless girl of malicious smile and different colored eyes – is entrusted to a morbidly cute, elaborately crafted puppet who comes to life frame by frame, as black spiders spin the web of her destiny. Out of ennui and curiosity, she leaves her comfort zone on the lap of her sleeping older sister (live-action intrusion of Metzli Robles) and drives herself to the very verge of existence.

Beneath the bright surface of Prita’s dirty beige world, Carrillo conceals dark symbols and the fear of losing her inner child – the assistant in eliciting the subconscious mechanisms during the creative process. As ostensibly serene dreams are pierced by the needle of anxiety and separation, the narrator’s whispery voice crawls under your skin, entwined with the wind whistling.

Later, it is the inspired imagery complemented by the Barton-esque score that speaks. Delicate as Victorian lace, the sumptuous combination of time-lapse photography and stop-motion animation provides plenty of enchanting shots. 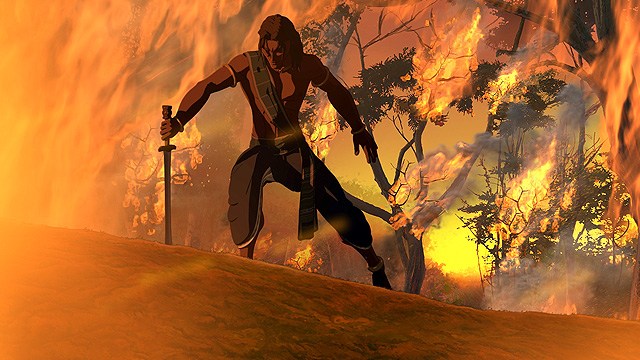 Considered a milestone in the Indian animation industry by the connoisseurs, “Arjun: The Warrior Prince” is a fantastical adventure based on motives from Mahabharata. It chronicles the coming of age story of a titular hero – a proficient archer entangled in conflicts between his brothers (the Pandavas) and his cousins (the hundred Kaurvas), ever since his early childhood.

In his shaping as a fearless warrior, Arjun endures many trials and tribulations and is influenced by his guru and family, deities and enemies. Unlike him, Arnab Chaudhri doesn’t always hit the target, but he does manage to keep the balance between gravitas and grandiosity, as well as to make the film appeal to both domestic and Western audience. Using some artistic freedom, he and his writer Rajesh Devraj stray away from the source material, yet they stay true to tradition.

Even though they deal with familiar themes, they weave a compelling narrative and deliver the work of epic and mythical dimensions – an idiosyncratic amalgam of a modest good night fairy tale and a magnificent pseudo-historical spectacle. The exquisite voice-acting and the expressive faces help them bring to life the legendary characters whose appearance betrays the influence of the co-producer – Disney India.

However, the animators of UTV Motion Pictures eschew the sweeteners, pop-culture references and talking animals for some graphic violence which is kind of obligatory when it comes to a warring setting. There’s also no singing and dancing like in Bollywood movies, except for one impressive scene which portrays the marriage ceremony of swayamvara. Speaking of impressive, “Arjun: The Warrior Prince” features eye-pleasing cel-shading animation and zestful score with folk influences that establish a commendable atmosphere. 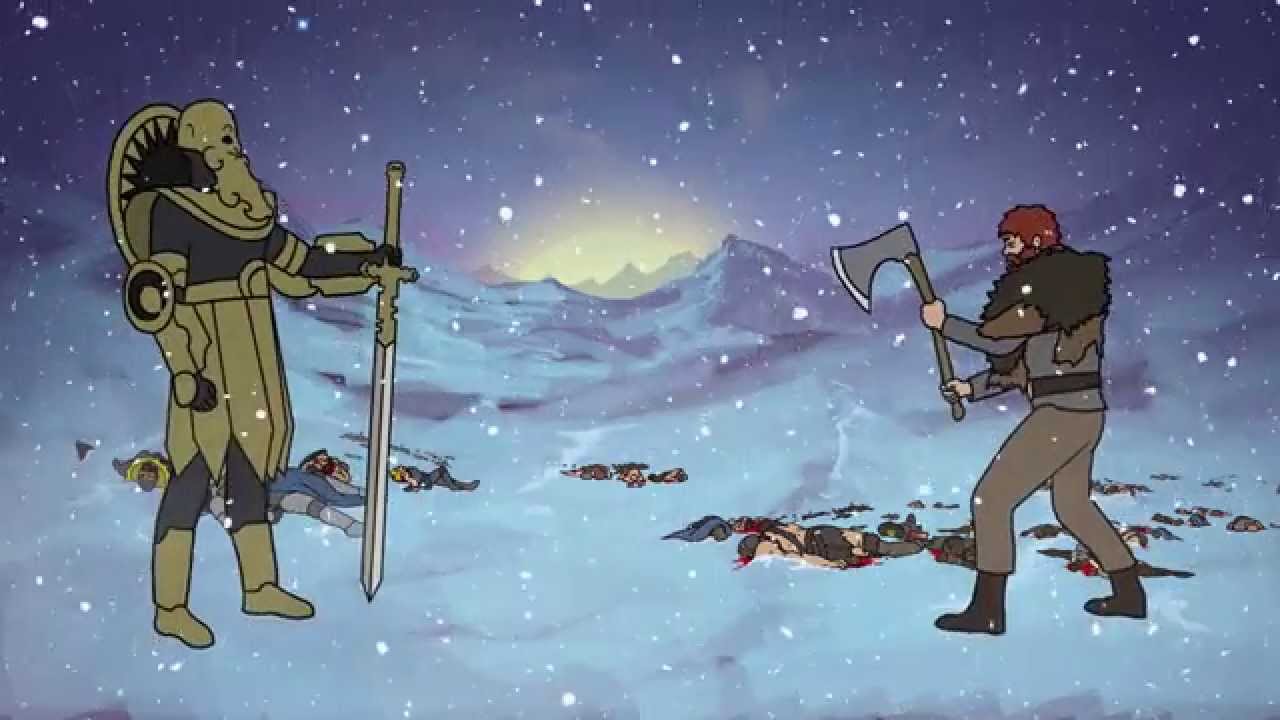 With only three short animated films under his sleeve, Morgan Galen King is on the right track to become the 21st century Ralph Bakshi and continue where Gerald Potterton stopped with “Heavy Metal”. After a couple of “tests” focusing on a castrated mercenary, Mongrel, he creates a gritty and brutal fantasy “Exordium” which serves as an announcement for his (much anticipated) debut feature “The Spine of Night”.

Inspired by cult films such as “Lord of the Rings (1978)” and “Fire and Ice (1983)”, he tells a story about “choosing to find individual meaning in our very short lives, even in the face of a vast and indifferent universe”, as he claims in the interview for Legendarium Media. A handful of warriors searching for hope are forced to confront a vastly superior enemy – a supernatural entity they call the Gatekeeper. Behind the heavy door unlocked by a golden sword, a sole survivor, Son of Man, finds a mysterious flower…

In its second half, “Exordium” takes a pessimistic and somewhat nihilistic turn, posing existential questions and suggesting the cyclic nature of history. It is a low-budget gem which seems to be a labor of love, especially towards the rotoscope technique which King sees as an ideal medium for blending realism and fantasy.

His co-director, illustrator and sound designer Josh Jones is also one of a few non-pros behind the characters’ voices, whereby the storyboards and additional artwork are provided by Jan Densford, props by Alex King and cool soundtrack – a mixture of electronica and psychedelic rock – by Strand of Oaks and After Future. A small team, indeed, but their joint effort is a big promise. 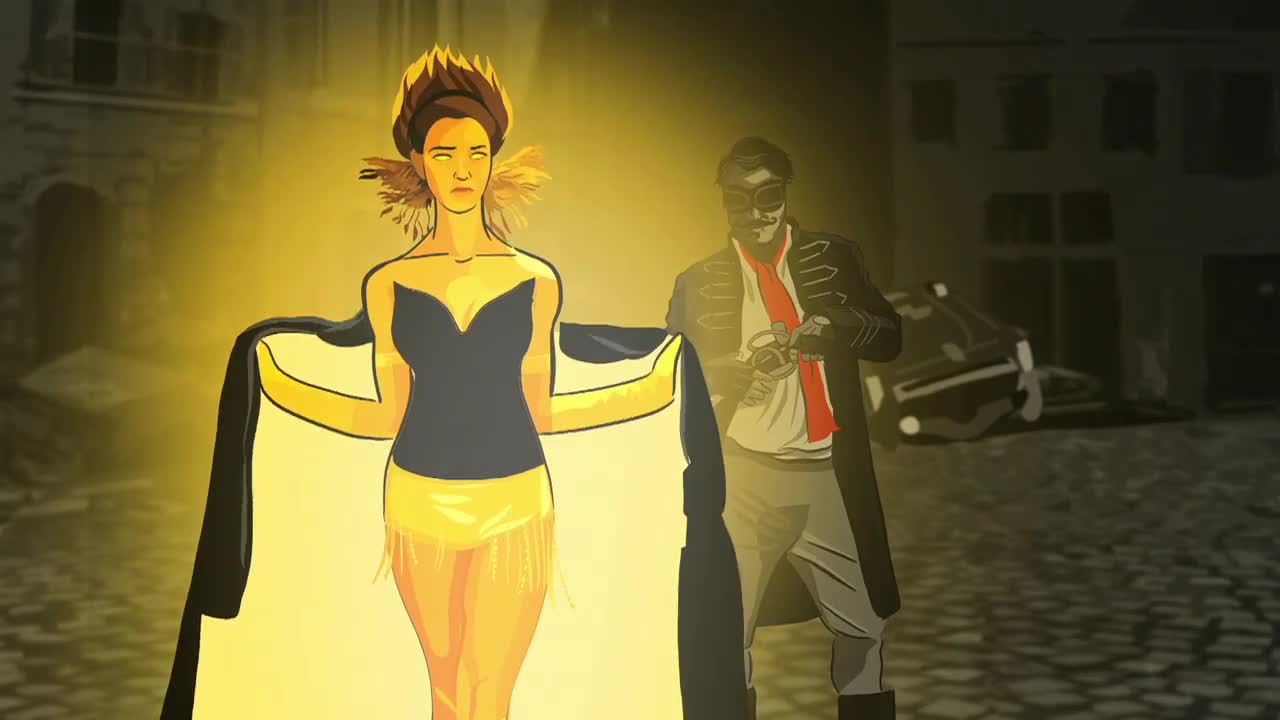 Another delightful eye-pleaser for the fans of rotoscope animation, “The Gold Sparrow” is a musical fantasy initially conceived as a video for the song of the same name by now-defunct band Oliver Future. Visually, it is similar to the noir drama “Alois Nebel”, as well as to the sci-fi thriller “A Scanner Darkly” which should come as no surprise, given that the head animator Michael Garza collaborated with Linklater on the said Dick adaptation.

To the sounds of eclectic rock, the exciting clash between outrageous colors and monochromatic gloominess metaphorizes art as a force that tears down the gray walls of our everyday. Set in a retro-futuristic metropolis, it sees the titular entity (Nikia Phenix) and her faithful companion, the malicious Ring Leader (Stessen himself), scouring the streets and depriving everyone of their color. It’s up to The Strongman (Sam Raver), The Fool (Noah Lit) and The Monk (Joshua Lit) to stop them, no matter the cost.

The real identity of The Gold Sparrow is left to the audience’s interpretation. Is she a muse in high dudgeon who has lost control or the extension of some dictator’s long arm – a tool for smothering creativity and keeping a firm grasp over the citizens? Or maybe, something even more nefarious is concealed behind her secretive smile? Whatever the answers to these questions may be, Stessen and his associates can be proud of their experiment results. 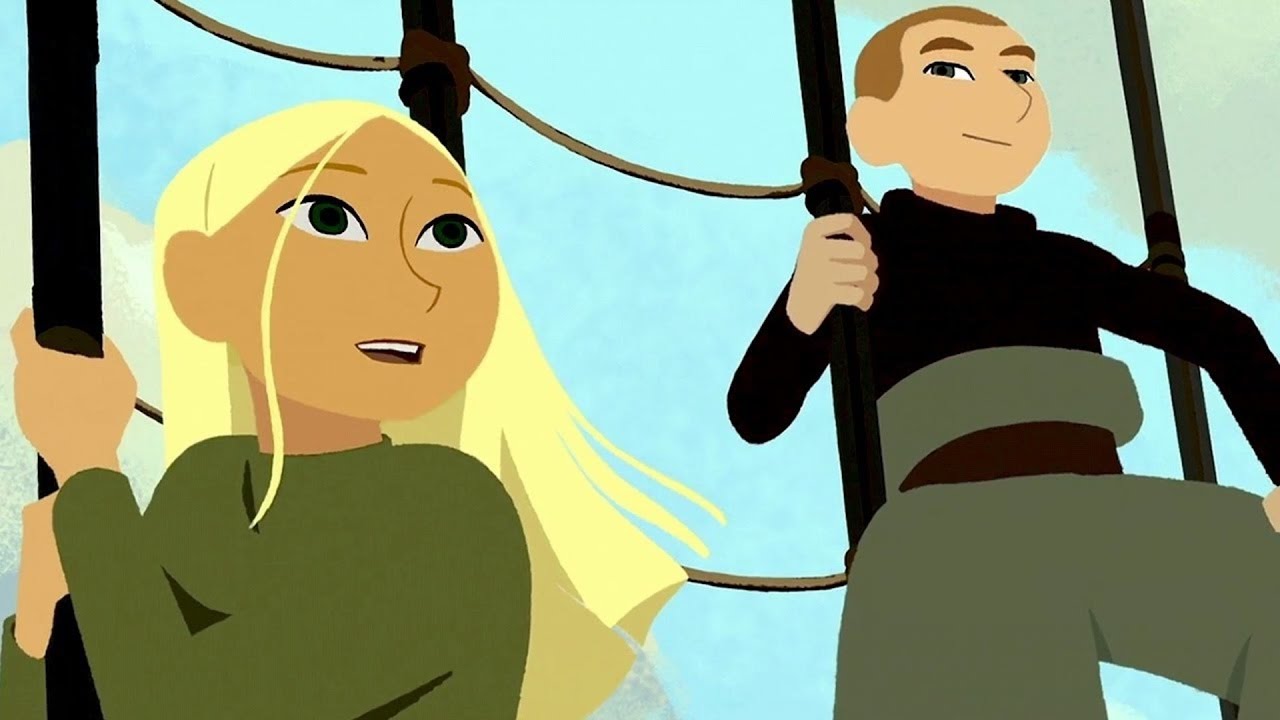 Rémi Chayé who has previously collaborated with Jean-François Laguionie (on Black Mor’s Island and The Painting), Tomm Moore (on The Secret of Kells) and Dominique Monféry (on Eleanor’s Secret) makes his directorial debut with “Long Way North (Tout en haut du monde)” which seems like an adaptation of a 19th century novel in the vein of a Hollywood Golden Age movie.

From the perspective of a classic storyteller, he spins the narrative around a bold fifteen-year-old aristocrat, Sasha, who exchanges the comfort of her St. Petersburg home for a risky journey to the North Pole, convinced that she will find her grandfather’s ship on her final destination. Running away from high-class sycophancy and an arrogant prince’s machinations, she arrives in an unnamed harbor where she will learn a lesson or two about life with no silver spoon in her mouth.

Working hard for a gruff, yet compassionate innkeeper, Olga, proves to be good training for dealing with a rather surly crew of sailors whom Sasha has to join. Her quick adaptability also comes in handy in confrontations against the superstitious and chauvinistic sea dogs, the only comfort being a friendly boy her own age.

However, their romance has to be put on hold, for it is of great importance to remain clearheaded amongst the icebergs and glaciers that threat to damage or crush the vessel. Time and again, Sasha demonstrates she is up to her self-imposed task and it is her “girl power”, as well as the unique, highly stylized visuals that the film’s forte lies in. 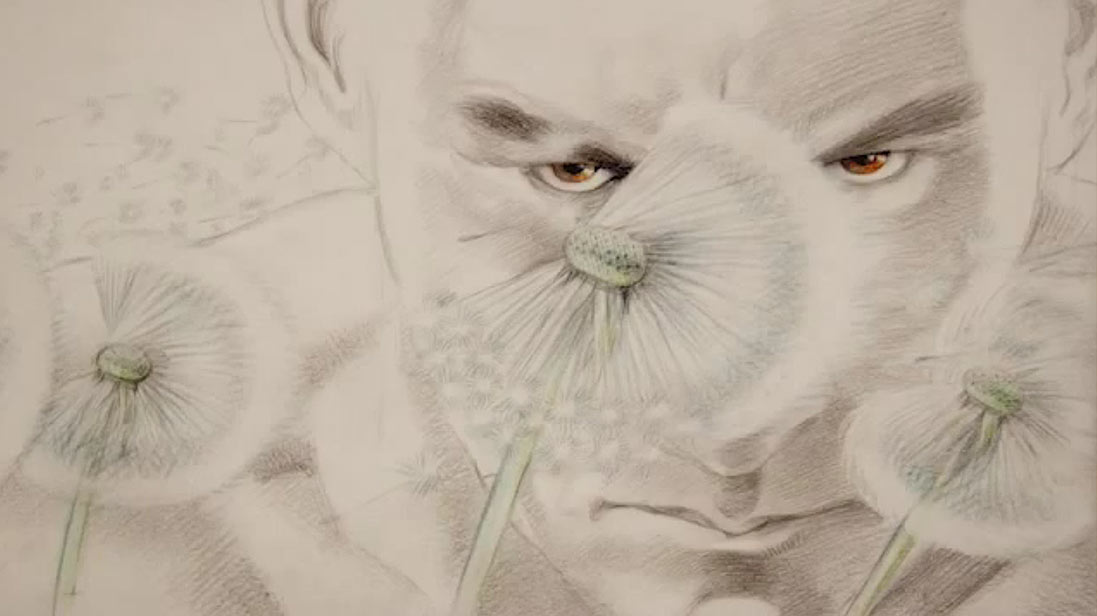 The veteran animator Richard Williams of “Who Framed Roger Rabbit?” and “The Thief and the Cobbler” fame treats us to one of the most fascinating short films in recent memory. As you might have already guessed, his “Prologue” is nothing more than an introduction to an extensive project – an adaptation of Aristophanes’s comedy “Lysistrata” – whose jocular work title is “Will I live to finish it?”

A showcase of its author’s virtuosity, it opens with a live-action sequence which clearly hints at the applied technique by showing us wooden crayons being sharpened. Williams’s wrinkled hands put the paper and the magic begins along with the first shot of buds and flowers coming to life. The idyllic picture of nature disintegrates when the four soldiers appear.

Two pairs of Athenian and Spartan soldiers confront on the pasture and fight to death. Their eyes glow with hate and fearlessness, but once the blood flows, their faces become disfigured in agony. A little girl who witnesses their battle runs to her grandmother’s embrace and the woman’s piercing gaze marks the end.

The highly realistic artwork and the impressive quality of animation reflect decades of studying human body and its movements. There’s a lot of negative space on Williams’s “canvas”, because he focuses on the protagonists’ interaction, reminding us that violence remains ugly, no matter how beautiful the image depicting it is. His meticulousness and his snippet’s poetics are awe-inspiring. 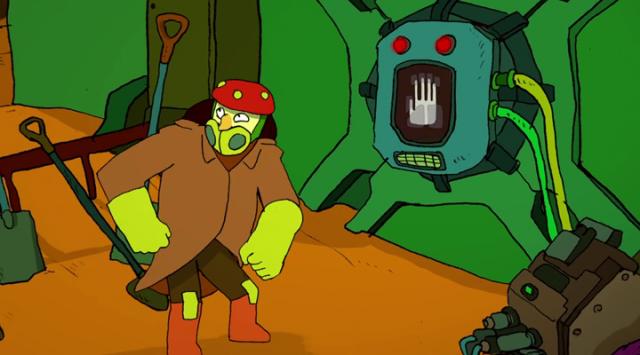 A wonderful homage to the Saturday morning cartoons, “Nova Seed” is the proof that sometimes, they DO make them like they used to. Four years in the making, this rough gem of retro animation is mostly done by one man only – the Canadian-born, Japan-based animator Nick DiLiberto who has blisters and band-aids speaking of his devotion.

Storywise, this young auteur employs sci-fi, fantasy and adventure tropes and archetypes, offering a compelling, if not original mélange of ideas. There’s a mad scientist and a reluctant hero who will save both the day and a mysterious damsel in distress, escaping from a tenacious bounty hunter.

Although simple and short, DiLiberto’s nostalgia-driven opus brims with inventiveness, and not to mention trippy colors that speak several languages, much louder than words. The themes of ecology, societal decadence, as well as the corruptive and destructive nature of power are intertwined in a work which is best described as Heavy Metal meets Rock & Rule meets Mad Max meets some Masaaki Yuasa’s anime by the way of René Laloux.

There’s a special charm in the ‘beat-boxed’ sound effects (a boy would produce whilst playing with his action figures) and ragged, pulsating lines of a bit crude, yet delightful traditional animation – a so much needed breath of fresh air in the age of glossy CGI. Sincere in its “awkwardness”, it keeps our inner child in the state of wide-eyed curiosity.