“Cosmos” is the last film from Polish director Andrzej Żuławski. Based on a novel from Witold Gombrowicz, the film follows a couple of young men who go to a small country town looking for refuge and peace. Witold, the protagonist of the film, is a law student who goes on a crazed detective-style hunt after he finds a hanged sparrow near the house where he is staying.

A hysterical film like one that only Żuławski can create, it is filled with self-referenciating humor, both to the film itself and to the many films he’s made throughout his career.

It is filled with symbols that Witold tries desperately to decipher, and clues that lead to another in seemingly unjustified ways. In the feverish development of the plot, the characters seem to be possessed, all of them behaving in erratic ways that Witold tries to organize and explain in a constellation of absolute nonsense.

“The Lobster” is a film about the failure of love in postmodern society. In the world presented to us by Greek director Yorgos Lanthimos, singleness is forbidden. Everybody must be in a relationship, and if it happens that somebody is left by their partner, they will be taken to a hotel, where they will have 45 days to fall in love with one of the other guests. If they fail to do so, they will be turned into an animal of their choosing.

The films rebels against the plastic search for love in our days, in which feelings have lost their place to the fear of loneliness. Love is something procedural and mechanical, with due dates and deadlines, and it’s controlled carefully in order to keep us in the comfort zone between the fear of loneliness and the fear of real feeling. Selfishness, self-deception, and fear have depleted our capacity for real understanding and fulfillment. “The Lobster” wants us to break away from that cold jail.

10. Birdman or (The Unexpected Virtue of Ignorance) (Alejandro González Iñárritu, 2014)

The word ‘pathetic’ is defined as “causing or evoking pity, sympathetic sadness, sorrow, etc.; pitiful; pitiable.” Riggan, the hero of this film (played by Michael Keaton), could easily be described under such an adjective. After becoming famous in his younger years by playing a superhero called Birdman, he decides he wants to redefine himself as an artist via a Broadway staging of Raymond Carver’s “What Do We Talk About When We Talk About Love.”

The Birdman persona of Riggan is in a constant battle with his artistic persona. While the major public prefers him as an entertainer, he feels asphyxiated by that life and decides he’d rather take the risk of failure than continue in the money-ridden machine of the heartless industrial entertainment that is Hollywood.

“Birdman” is the most intellectually ambitious film by Oscar-winning Mexican director Alejandro González Iñárritu, and it serves as a critique of the art world and the entertainment world alike. Riggan embodies the efforts of the creative personalities; their struggle against the world, the critics, and themselves, in their way of overcoming their inner demons and the artistic passion for their work.

Art and entertainment are two sides of the same coin in this film, which attempts to discover what it is that distinguishes them. The film seems to imply that we recur to entertainment to laugh for awhile, and to art when we finally admit we need to be saved.

“Eraserhead” is David Lynch’s first feature film, a schizophrenic nightmare in which we get a glimpse into the life of Henry Spencer, a man living in a decaying world of factories and abandonment. He is a factory worker in vacation, he has a girlfriend and she is pregnant. In the unnerving environment, where everything seems to be falling apart while a strange hiss blows omnipresent, she gives birth to a monstrous child who won’t stop crying.

The film’s imagery is strong, violent, and confusing. Lynch’s surreal approach and the lack of a conventional narrative make of this a deeply disturbing experience. The eerie atmosphere in which Henry lives serves as a reflection of his own psychological landscape. He is stuck in an unpleasant life, having to deal with a mutant child he does not desire, with the vague promise that “In Heaven, everything is fine”. 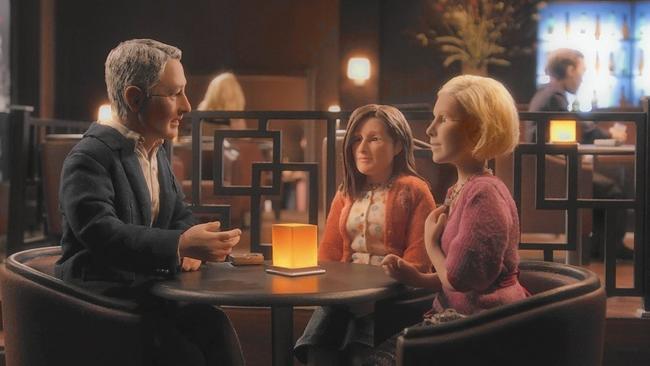 Charlie Kaufman has defined himself as an eminently existentialist author. With “Anomalisa”, he explores love, identity, and the human condition. In spite it being an animated film, this one is extremely human; in fact, it’s so human it hurts.

Michael Stone is the name of our protagonist, an author who specializes in customer service and who is widely praised in his field. He is a dull man, numbed by his mundane and gray life. In this state of things, he has become solipsistic, finding other people to be completely absent of defining features, all of them speaking to him with the same narcotizing voice.

This film paints a bleak picture of human relations. How can we be interested in somebody when everybody else is so boring? The situation changes during a business trip when Michael meets Lisa, a shy and plain girl with whom he falls in love almost at first glance. The story develops, and then we are left with a taste of melancholy and sadness. Relationships fail, love fails, and what seemed shiny and promising one day might just seem uninteresting and unsatisfying the next, and no one knows why.

Deeply touching and deeply human, “Broken Flowers” stars Bill Murray as Don Johnston, a man who, after being left by his girlfriend, receives an anonymous letter from a former lover who informs him that he had a son with her 19 years earlier, and that his son is looking for him.

With the help of Winston, his amateur detective neighbor, he sets out to find that anonymous lover by visiting all of the women with whom he had relations during that time period. The film is structured as a series of character studies in which the mystery of Don’s fatherhood starts to unravel.

With each visit, Don is received in different ways; sometimes with joy, others with contempt. We as spectators start to join the pieces as if we are detectives, deciphering the relationship between Don and his lovers when they were young, having diminutive glimpses into their current lives.

This is a film about the lives of people and their stories; it makes us look back to the people who were a part of our lives at some point, and wonder whatever happened to them. Are they happy? Are they miserable? Do they think of us every once in awhile?

“Safety Last!” could easily be considered as Harold Lloyd’s masterpiece, a thrilling and suspense-filled physical comedy in which we see him climb the outside of a building as a publicity stunt. The story goes as follows: Harold leaves his small town and goes to the city to work, hoping to make enough money to marry Mildred, his girlfriend. However, he does not find the success he was hoping for and ends up as a store clerk.

After his boss launches a contest, offering one thousand dollars to the person who could bring the most customers to the store, he teams with a friend of his, a ‘human fly’ who will climb the building and share the money with him. Things don’t go as planned, however, and Lloyd is forced to climb the building himself.

The pursuit of economic success is turned into a circus in this film. The romanticized tale of a man willing to risk his life in order to impress the woman he wants to marry makes for an exciting experience, but it also reveals the derangement inherent to our money-ridden society.

Money has become the key to achieve our dreams; to lead a satisfying life, to express our love, and to be respected, we need money. And if we’ve the bad luck to belong to the lower or middle classes, we need to be willing to surrender our time, our dignity, and our safety in order to achieve it.

In this seemingly never-ending Kafkaesque opera, we witness the trials and tribulations of Sam Lowry, a bureaucrat who becomes an enemy of the state due to a misprint in an administrative document. Built with a maze-like structure, it takes advantage of its fanciful dystopian setting to make a satire of life in the postmodern world.

Everybody is monitored by the government, every inch of available space is used for marketing purposes, and personalities and dreams are relinquished in favor of productivity and obedient behavior. Sam represents the oppressed worker, who seems like a robot stuck in the mechanicity of a job that doesn’t bring him any kind of fulfillment.

The only place where Sam can be at peace with himself is in the world of his dreams, where he is a superhero that goes on surreal quests to save a woman he loves. It is a life-affirming film that talks about the emancipation of the individual.

The film seems to ask: how civilized is civilization, if it makes all of our days dull and miserable? “Brazil” is a warm invitation to break the shackles of the corporate lifestyle that thwarts our imagination, and the pursuits of our heart to seek something more organic and enjoyable.